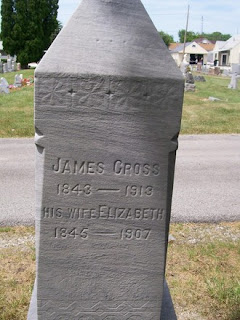 James Cornelius Cross was born March 14, 1843 to Charles Cross and Patience Manning Cross. His father was born in England, while Patience was a native of Kentucky. James Cross was a carpenter by trade, and was very active in the Catholic Church. He married Elizabeth Marshall, a German immigrant, who converted to Catholicism when she married James.

During the Civil War, James Cross served in Company G of the 123rd Ohio Volunteer Infantry. He was a member of the McMeens Post of the G.A.R. in Sandusky. James Cross died on December 14, 1913, and is buried in St. Joseph’s Catholic Cemetery in Sandusky, Ohio.

The son of James and Elizabeth, Nicholas Charles Cross, became a brother in the Catholic Church. He taught school in Bardstown, Kentucky, and Peabody, Massachusetts.
Posted by Dorene from Ohio at 4:22 AM