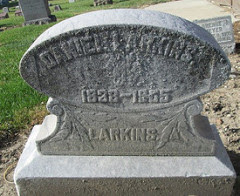 According to U.S. Census records, Daniel T. Larkins was born in the state of Vermont in 1838. In 1870 Daniel Larkins and his wife Bridget resided in Sandusky, Erie County, Ohio, with their children Mary and James. Mr. Larkins was employed at the spoke factory. Son Daniel P. Larkins was born in 1872.  In the 1880 U.S. Census, the Daniel Larkins family was living on Jefferson Street in Sandusky, and Daniel, the father, was employed as a gas fitter. Both of his parents were listed as natives of Ireland. According to an article from the February 1, 1905 issue of the Sandusky Register, Daniel T. Larkins died at his home at 606 Pearl Street on January 31, 1905, after a lengthy illness. He was 66 years old. Mr. Larkins left behind his wife and one daughter, Mrs. John Powers, and two sons, James Larkins, engineer on the Big Four, and Daniel P. Larkins, a steam fitter. His funeral was held at Holy Angels Church and burial was at the St. Joseph Cemetery in Sandusky, Ohio. I am not positive if this Larkins family is connected with my Larkins line, but both lines were of Irish Catholic descent, and had family members employed in the railroad, and all attended Holy Angels Church. Many, many members of both lines of these Larkins families are buried at St. Joseph Cemetery. 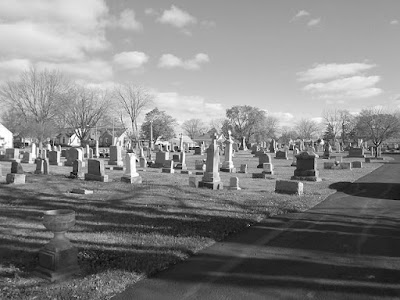 Vintage Pictures of Grandpa Steen Parker and His Brothers

Tonight we had a family get-together, and my Aunt Pat on my Mom's side shared some pictures with us, that she allowed me to scan. What fun! Below are some pictures of my maternal grandfather, Steen Leroy Parker. He is just an infant in this one, taken about 1908 at the Bishop studio. 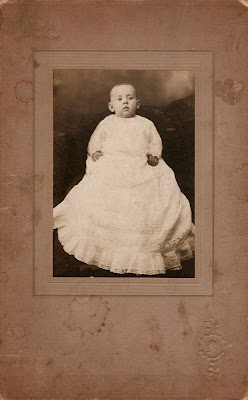 Grandpa Steen Parker is a toddler in this picture, taken at the Bishop studio about 1910. 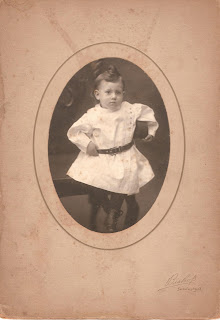 Steen is pictured here with his older brother Glenn Parker, and his younger brother Paul Parker. Baby Janet had not been born yet. 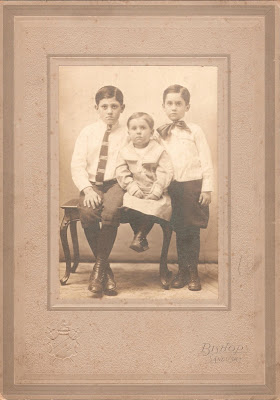 Thanks so much for sharing these treasures Aunt Pat!!
Posted by Dorene from Ohio at 7:18 PM 0 comments 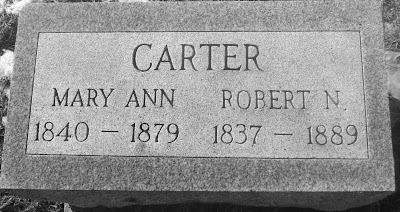 This tombstone honoring the memory of Robert and MaryAnn Carter is located in Block 5 of Sandusky’s Oakland Cemetery. Mrs. Mary Ann Carter died from heart disease in 1879, just a few days after the birth of her youngest child. Robert Carter died from consumption in March of 1889. According to the death record of William Carter, his father Robert had been born in York, England. Mary Ann Carter, whose maiden name was Mary Ann Harrison Spencer had been born in Nottingham, England. A listing in Hellrigle's 1876 Sandusky City Directory listed Robert Carter is residing in Sandusky, Ohio, and his occupation was “plane maker.”  Mr. and Mrs. Robert Carter had six children, including a son William who was a printer for the Sandusky Register. Four of the Carter daughters, Lucy, Frances, Minnie and Amelia (sometimes known as Millie) became school teachers. Another daughter, Emily Carter Siggens, was the mother of Ernie Siggens, who was a football star at Sandusky High School, and went on to serve as Sandusky’s Mayor.
Posted by Dorene from Ohio at 1:30 AM 0 comments 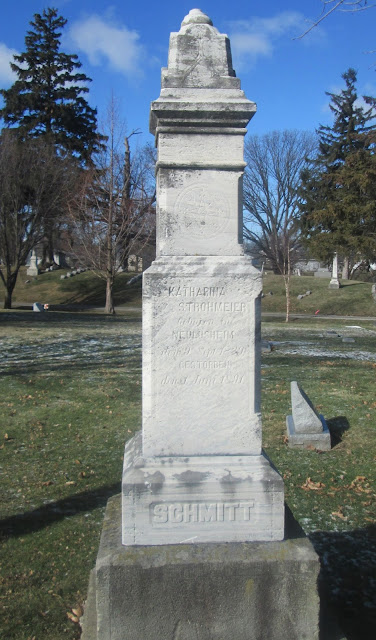 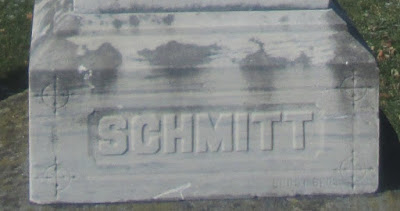 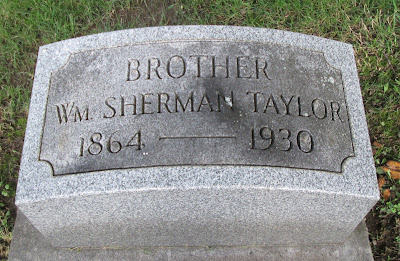 William Sherman Taylor was born in Perkins Township on June 5, 1864, while the Civil War was still being fought. His parents, Charles W. and Caroline (Wright) Taylor owned a farm in Perkins Township. William's great grandparents, Joseph and Lois Taylor, Sr., were pioneer residents of Erie County, coming west from Connecticut by oxen train in 1815. William's grandfather, Nelson Taylor, served on the first Board of Erie County Commissioners. According to a biographical sketch in A STANDARD HISTORY OF ERIE COUNTY, OHIO, William Sherman Taylor grew up on the old family homestead. He was a farmer and  stock raiser, and he also worked as a dealer in foundry and molding sand. William Sherman Taylor suffered a heart attack as he was driving an automobile on January 21, 1930. Funeral services were held at the Taylor residence, and burial was at Perkins Cemetery. An article about Mr. Taylor's death was featured in the January 22, 1930 issue of the Sandusky Star Journal.
Posted by Dorene from Ohio at 1:30 AM 2 comments 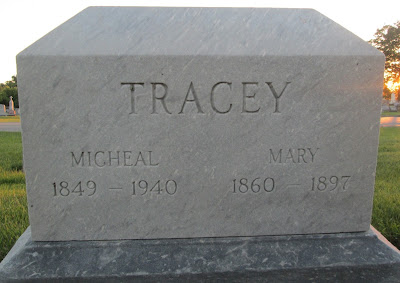 Michael Tracey  was a pioneer resident of Sandusky, born to Irish immigrant parents. In the early 1900s, Mr. Tracey sold coal and wood on Warren Street in Sandusky, Ohio.

On January 18, 1940, Michael Tracey died at the home of his son Alfred, after a brief illness. Mr. Tracey was survived by three daughters, four sons, twenty grandchildren, and one great grandchild. He was buried at St. Joseph's Cemetery in Sandusky, Ohio, where many of his family, friends, and former customers had also found their final resting place. He had outlived two wives, both who had the first name of Mary.  An obituary for Michael Tracy is found in the 1940 Obituary Notebook at the Sandusky Library. 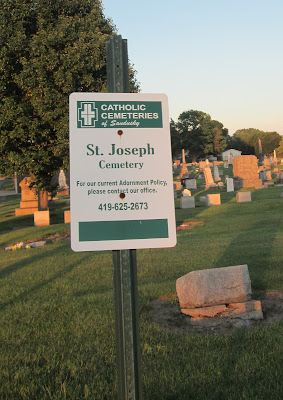 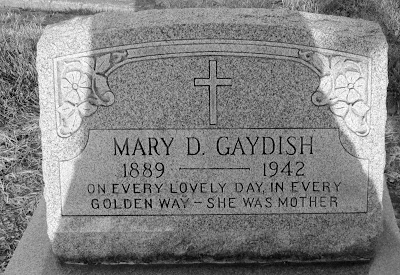 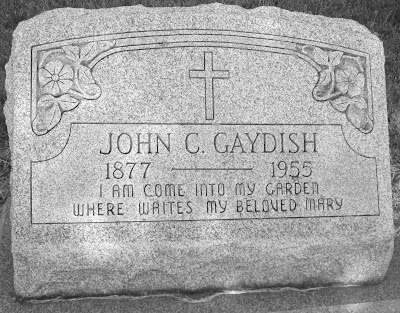 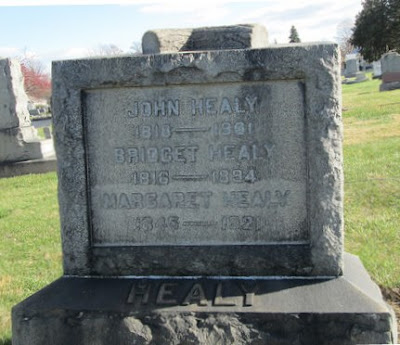 John Healy, one of Sandusky's well-known and respected citizens, died at his home, 1121 Jefferson Street, at 1 o'clock Monday morning. Deceased was 83 years of age. The funeral will be held from the family residence, Thursday morning, at 8:30 o'clock, and from Sts. Peter and Paul's Church at 8 o'clock.

John’s wife, Mrs.  Bridget Healy, had died in 1894. John and Bridget’s daughter, Margaret Healy, died on August 10, 1921.  Her death record stated that she was born in County Clare, Ireland, in 1849, and that she came to the United States in 1852. John, Bridget and Margaret Healy are all buried at the St. Joseph Cemetery in Sandusky, Ohio. A lovely cross adorns the top of their tombstone. 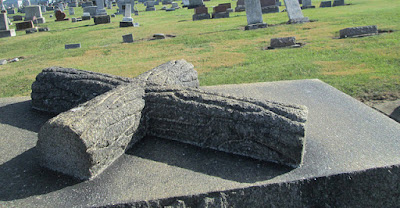 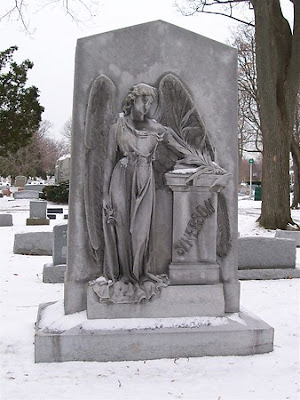 Several members of the Sinerson family are buried in the family plot at Block 94 of Oakland Cemetery. According to the 1900 U.S. Census for Erie County, John and Mary Sinerson were both born in Germany, John having emigrated in 1866, and Mary in 1861. The Sinerson children were listed in the 1900 Census as:

The 1904 Sandusky City Directory indicates that John Sinerson, the father of the family, was the manager of the S. J. Kibler and Brother, Co., a company which dealt in hides. John Sinerson, the son, was the proprietor of the Murschel House, a hotel which also had a restaurant. The Murschel House was located opposite the railroad depot in Sandusky.

John Sinerson, Jr., died on November 22, 1903. His obituary in the November 27, 1903 "Sandusky Evening Star" reported that John had been "one of the best known men in the city...The deceased was of a cheerful disposition and made hosts of friends by his unique way of relating amusing stories and it is believed that he did not have an enemy in the city. His sudden death came as a shock to those who knew him best." John Sinerson, Jr. was only 35 years old at the time of his death. 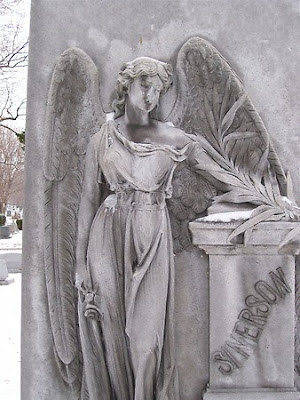 Posted by Dorene from Ohio at 1:13 AM 1 comments 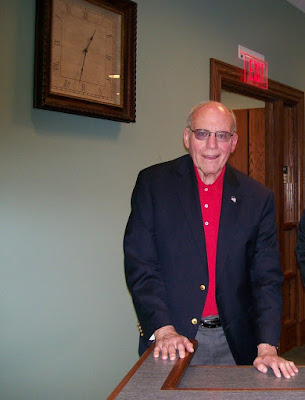 Today Sandusky, Ohio is mourning the loss of George Mylander, a longtime leader in the community, philanthropist, and former city commissioner and ex-officio Mayor of Sandusky. Personally I got to known Mr. Mylander primarily through the Erie County Historical Society. Mr, Mylander was present at the dedication of the historic maker which commemorates the former Medusa cement factory. At another meeting of the Historical Society, he saw to it that I got to meet the granddaughter of football great Knute Rockne. He was one to whom community members turned for advice and guidance. He will be deeply missed. You can read about a hall at BGSU Firelands, which was named for Mr Mylander in recent years, in this article from the BG News.
Posted by Dorene from Ohio at 3:52 PM 0 comments

Above is a rubbing of the name of Herman E. Gant, who lost his life in the Vietnam War. Thank you to Jacob Smith and the Vietnam War Veteran who made this happen. Herman Gant was an outstanding athlete at Margaretta High School. Besides excelling in football, basketball and track, Herman took part in the Drama Club, and he was just an all around great guy. He lost his life in the war, while trying to assist injured soldiers.  Herman E. Gant died on January 3, 1969. He was buried in Sandusky's Oakland Cemetery.  You can see a picture of Herman E. Gant at the website of the Virtual Vietnam Wall. Thank you for your service to you country, Herman!
Posted by Dorene from Ohio at 1:30 AM 0 comments 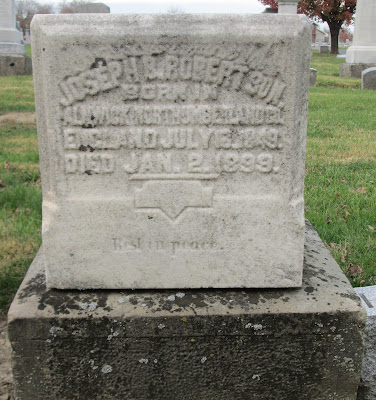 Joseph Bell Robertson was born in Alnwick, Northumberland County, England in July of 1849 to William and Elizabeth Robertson. By the year 1860, he was residing in Sandusky, Erie County, Ohio, with his parents and several siblings. In 1870, he was working with his father in the grocery business. Later he was a salesman for the Hoover and Woodward, Wholesale Grocers.  According to birth records on file at FamilySearch, Joseph Robertson and his wife, the former Bridget Kelly, had several children, born in the 1870s and 1880s. On January 2, 1899, Joseph B. Robertson passed away at the family residence on Decatur Street in Sandusky, Ohio, at the age of 49 years. Funeral services for Joseph B. Robertson were held at Saints Peter and Paul Church in Sandusky, Ohio. 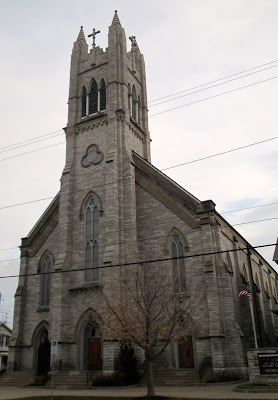 Burial was at the St. Joseph Cemetery. An article which appeared in the Sandusky Star of January 4, 1899 stated, "The business connections of the deceased and his sterling character had won for him many friends who came to pay their last tributes of respect to their dear friend." The phrase "Rest in peace" is inscribed at the bottom of the tombstone of Joseph B. Robertson.
Posted by Dorene from Ohio at 1:30 AM 0 comments