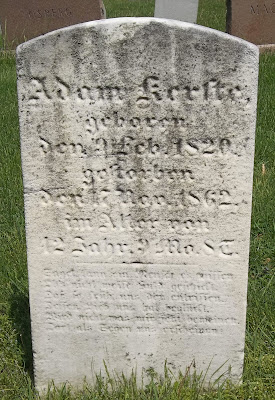 According to the ERIE COUNTY, OHIO, CEMETERY CENSUS BEFORE 1909, Adam Kerste was born on February 9, 1820 and he died on November 7, 1862. His tombstone is located in Block 33 of Oakland Cemetery. A German inscription adorns his stone, but I was unable to decipher it at this time. Rest in peace, Adam Kerste!
Posted by Dorene from Ohio at 1:40 AM 0 comments 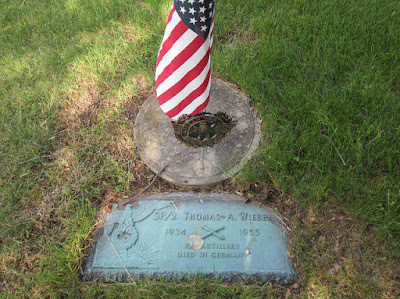 Army Specialist Thomas A. Wieber lost his life in a civilian accident while serving in the U.S. Army in Germany, in November of 1955. Funeral services for Thomas A. Wieber were held at St. Mary's Church, and burial was in Calvary Cemetery. Thank you for your service to your country!
Posted by Dorene from Ohio at 1:30 AM 0 comments 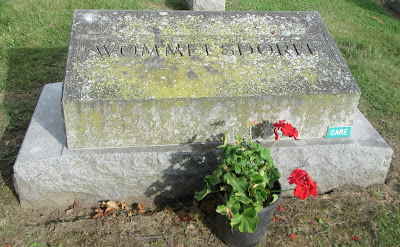 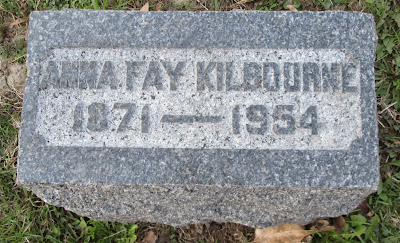 Miss Anna Fay Kilbourne was the daughter of Lincoln P. Kilbourne and his wife, the former Mary Webster Radcliffe. Anna was an early registrar in the Vital Statistics division of the Erie County Health Department. Anna Fay Kilbourned died in Cleveland, Ohio, at Lakeside Hospital in June of 1954. Before her death, she had been a resident of the Episcopal Home in Cleveland. Her remains were returned to Sandusky, Ohio, for burial in the family lot at Oakland Cemetery. Anna was a descendant of James Kilbourne, pioneer Ohio resident. An obituary for Miss Kilbourne appeared in the June 22, 1954 issue of the Sandusky Register.
Posted by Dorene from Ohio at 1:30 AM 0 comments

Poem about Ohio by Nellie Grant

In the book POEMS ON OHIO, compiled by Clement Luther Martzoloff (Herr Printing, 1911), on pages 2 and 3 is found a poem written by Nellie Grant of Oak Harbor, Ohio, entitled "Imperium in Imperio."

Notes in the book indicate that Nellie Grant was a teacher, and she wrote the poem after hearing a lecture on "Ohio and the Ohioans" at the Ottawa County Teachers' Institute. I have lived in the state of Ohio all of my life, and of course it is my very favorite state in the U.S.! 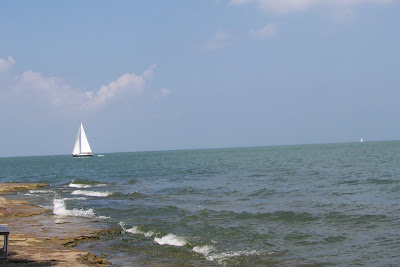 Posted by Dorene from Ohio at 3:31 PM 0 comments 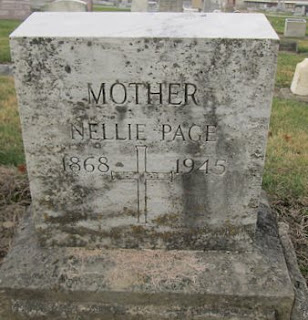 Mrs. Nellie Page was born Nellie Weingates, the daugher of Frank and Bridget Weingates. Mrs. Page died on November 10, 1945, in Tiffin, Ohio. A transcription of her obituary, which appeared in the November 10, 1945 issue of the Sandusky Register read:

Mrs. Nellie Weingates Page widow of Frank C. Page, former Sandusky resident, died Saturday at her residence in Tiffin, following a long illness. She was a life-long member of Holy Angels' Church, this city. Surviving are one daughter, Mrs. Edmond L. Stewart; one son, John Arthur Whetstone, both of this city; a brother, A. C. Weingates, former chief of police here ; a sister, Mrs. John Hennessey, of Canton; two grandchildren John Stewart, this city, and Lieut William L. Stewart, Camp San Luis, Cal.; and one great-grand child. The body is at the Frey Funeral Home, where friends may call after 2 p. m. Sunday. Services will be Tuesday at 8:30 a. m. from the funeral home and 9 a. m. at Holy Angels' Church, the Rev. William Armitage, officiating. Burial will be in St Joseph's Cemetery.

Wordless Wednesday: "Without Thee What is All the Morning's Wealth?" 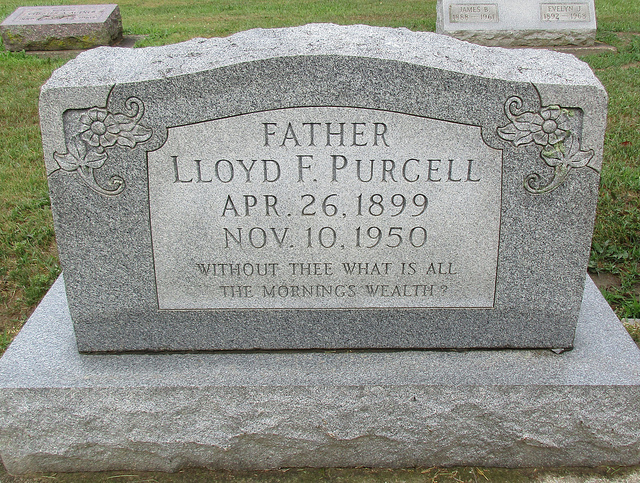 These photos are mostly what dad looked like when he played softball. He usually wore a t-shirt or a Grace Lutheran Church softball team shirt. Shoes were rarely tennis shoes, like the ones in the picture. Mostly he wore his Sunday dress/church shoes to play softball in. He NEVER wore real baseball spikes. He was always our church softball team pitcher. He (and Todd) were the best I ever played with who could hit a softball to the opposite field, which was right field. The reason you tried to hit to right field was this ... the object of baseball is to score more runs that the other team...we all know that. But with a man on second base, if the batter hit the ball to right field, the man on second would always score on that hit to right field. Or .... if you had a man on first base, a hit to right field would easily send the man on first base to third base. Then a sacrifice fly pop up would usually get the guy on third base home (assuming there were less than two outs when the pop up occurred). EVERYBODY in 14 states and half of Canada knew that when Dad was up to bat, he was going to hit the ball to right field. The defensive team would put extra players on the right side of the field to stop him and Dad would STILL find a spot to hit the ball without the defensive team catching it. Many times he trotted into second base with an easy double. Sometimes, depending on the English spin on the ball, his hits would roll way off the baseline into the right field foul area and he would trot in for a triple...sometimes even a home run.  Todd was really good at it too ... but Todd had great power to right center field ... so whereas Dad would try to place the ball RIGHT ON THE FIRST BASE FOUL LINE, Todd would just knock the crap out of the ball and hit it over the heads of the right center fielder or completely over the fence. Matt and I were able to hit to the opposite field too ... but my hits were mostly singles or doubles and mostly just to advance the runner to third base. Matt did it to advance the runners and get on base himself .... but Matt did not have the running speed ... 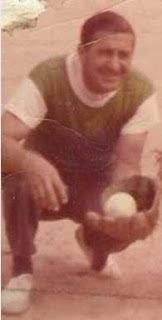 Hitting to right field was a skill that not everybody could master because it takes great patience to do it. The natural thing for a right-handed batter (which we all were) is to hit the ball to left field. That is where a right-handed hitters natural power is. To hit it to right field so specifically as Dad and Todd did, you had to stay patient in the batter's box until you got the right pitch to do it...the best pitches were the ones a little on the outside of home plate because an outside pitch is so much easier to take it to right field. So .... many times the pitcher would pitch the ball on the inside corner of the plate so the batter couldn't take it to right field. When then happened, the batter (Dad or all of us) would shift our feet in the batter's box and move our bodies toward right field to accomplish the feat. We all looked like ballet dancers doing it. Sometimes it would cause you to pop the ball up and be an easy out. That happened to me a lot but never seemed to be a problem for Dad and Todd. The other problem with shifting your feet around is that if you stepped on home plate while batting the ball, the batter was called out. You cannot touch home plate while batting the ball ... PLUS, you have to stay in the batter's box, as well.... 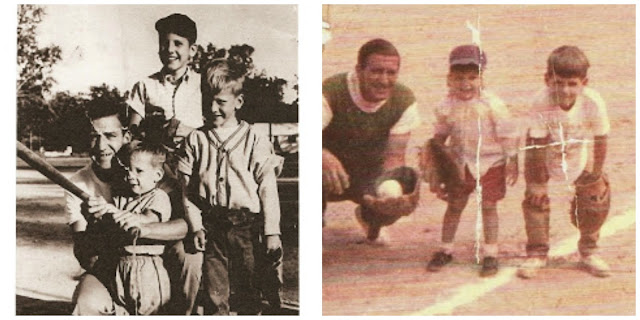 Posted by Dorene from Ohio at 6:14 PM 0 comments 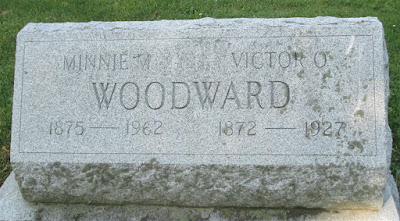 Victor Ovid Woodward was born in Lancaster, Pennsylvania to Mr. and Mrs. Ambrose Woodward. As a young man he was involved in the theater business as well as the circus business. In 1908 he moved to Sandusky, Ohio, where he was a theater manager until 1920. In 1920, John A. Himmelein purchased the Rialto Theater in Elyria, and he asked Mr. Woodward to manage it for him. On November 2, 1927, Victor O. Woodward died at the age of 55 from heart disease. His remains were returned to Sandusky, Ohio, for burial at the Oakland Cemetery. An obituary for Mr. Woodward is found in the November 2, 1927 issue of the Sandusky Star Journal. Mrs. Minnie Woodward lived in Sandusky in the 1960s. She passed away in 1962, and was buried next to her husband at Oakland Cemetery.
Posted by Dorene from Ohio at 1:30 AM 0 comments