John Peterson, A Veteran Sailor, and His Wife Ann 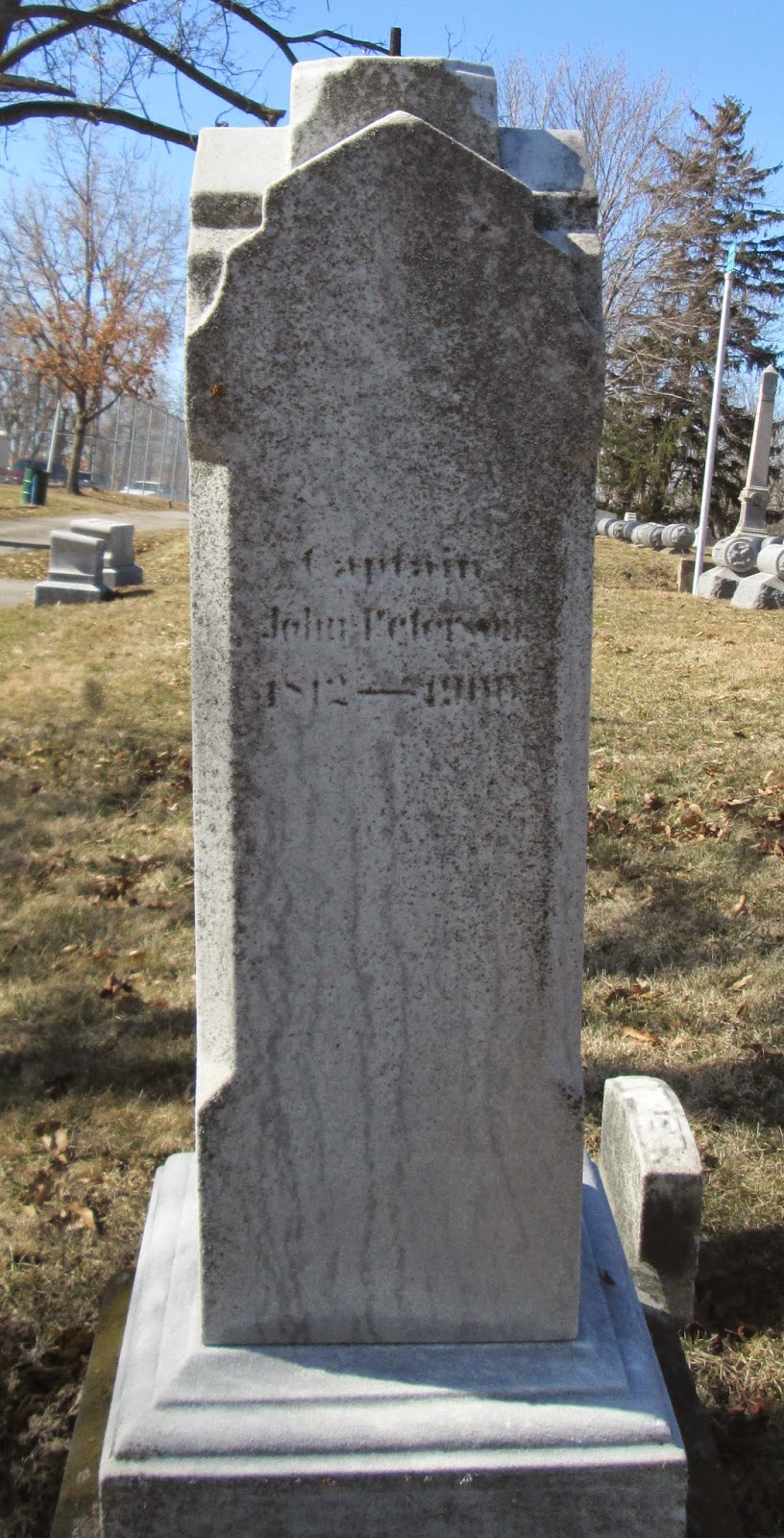 Captain John Peterson, a longtime sailor in the United States and abroad, died on January 4, 1900. An obituary for Capt. Peterson appeared in the January 4, 1900 issue of the Norwalk Reflector, having been reprinted from the Sandusky Register. It read:


VETERAN SAILOR
Capt. John Peterson in the Haven of Eternal Rest
From the Sandusky Register

At midnight last night Captain John Peterson, one of the oldest, if not the oldest lake mariner, was called from this world into that port not tossed by storms. His death occurred at the residence of his daughter, Mrs. J. Holland, on East Adams Street, after an illness of some length. His career was in some respects most remarkable. He was born in Sonnderburg, Denmark, in 1812, and was at the time of his death 88 years old. He came to this country when a young man, and in 1837 settled at Huron, where his brother.­ Capt. J. D. Peterson, still re­sides. He followed the lakes for 53 years, during 43 years of which time he was master of some boats. In 1860 he made a trip from Huron to Liverpool, Eng., in the schooner Evelyn Bates. On this trip he ­ encountered the historic whirlwind storm which raged for six days and will be remembered by some of the older residents. In 1864 he came to Sandusky and has resided here since that time. He was captain of several boats, among which were the schooners C. N. Ryan and Provost. During the past ten years he has been of necessity in­ active on account of his advanced age. His wife died in 1881 and his only remaining relatives are his daughter and brother.

Capt. Peterson's wife, the former Ann Lee, had died in 1881. Both John and Ann Peterson are buried in Sandusky's Oakland Cemetery. 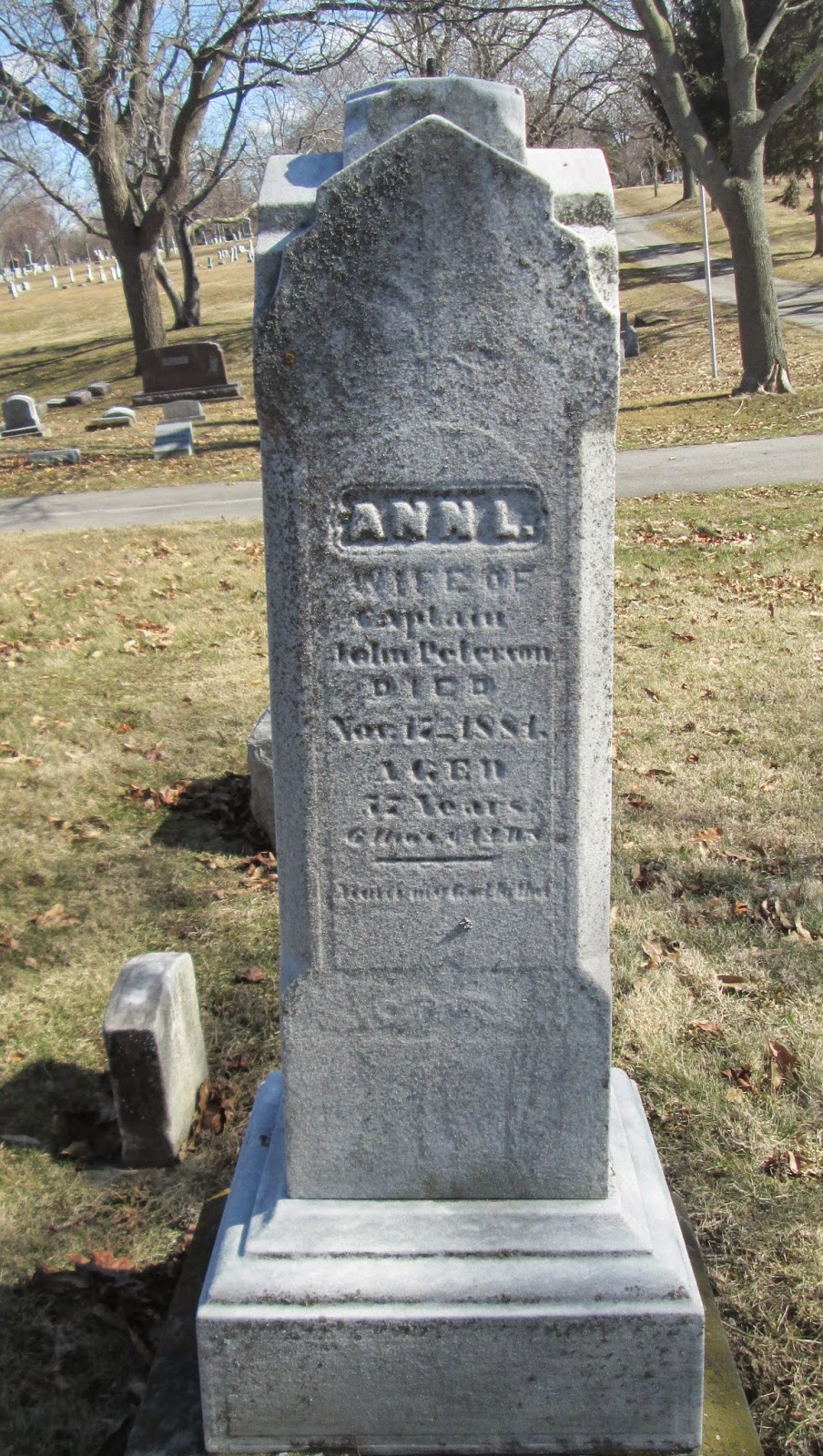 The Peterson monument stands tall in the western portion of Oakland Cemetery. John Peterson was a brave man, who faced danger on the waters, many a time. Ann Lee Peterson must have been a strong women, as both her husband, and her brother Seth Lee,  were seafaring men. She had to face life head on, by herself, when her husband and brother were on lengthy trips. 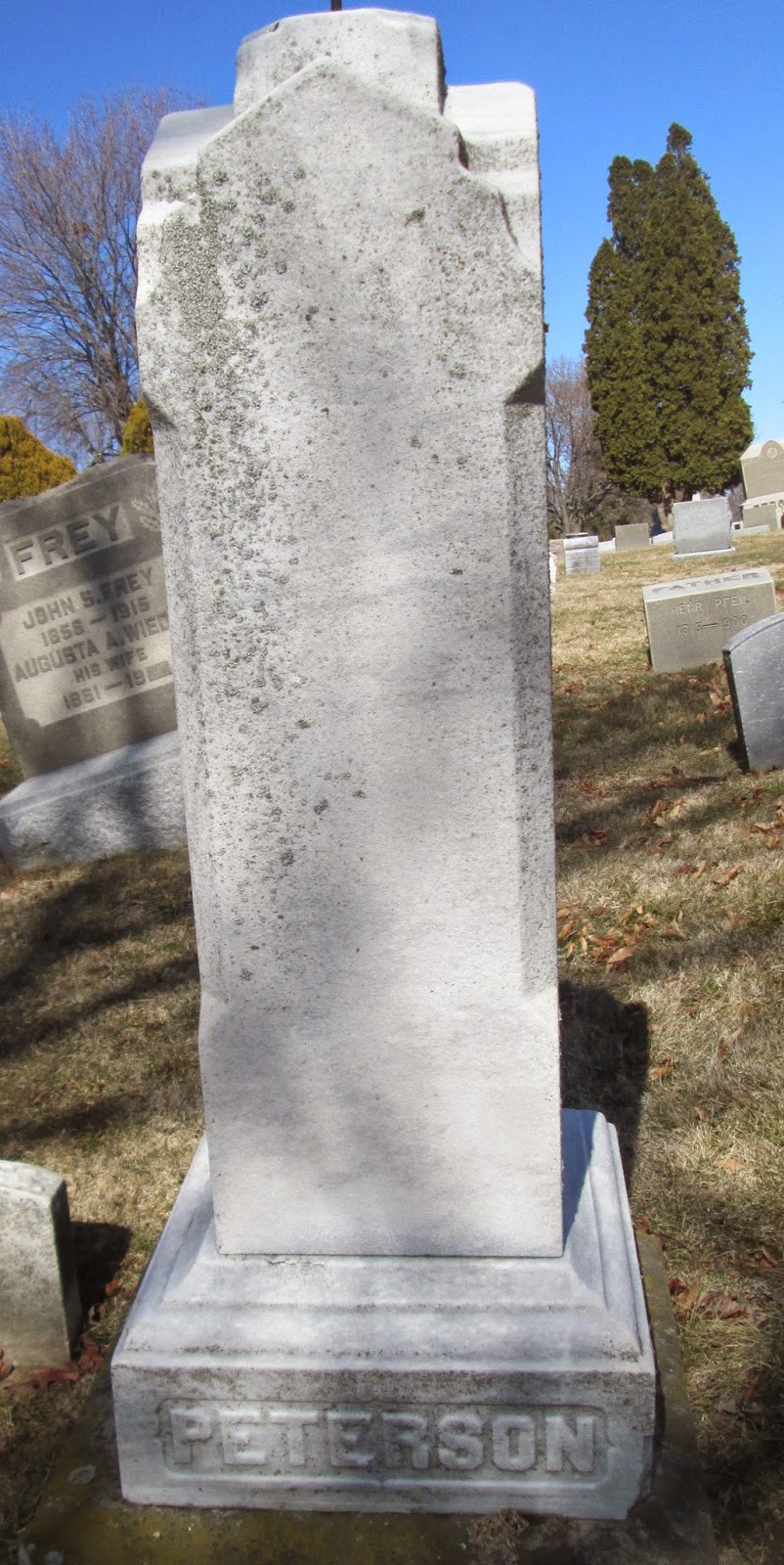 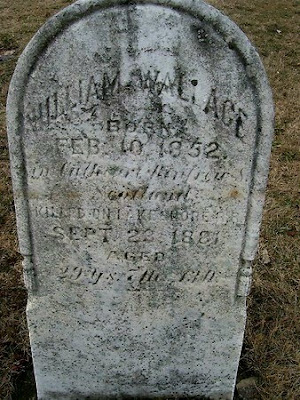 In the 1880 U.S. Census for Erie County, Ohio, William Wallace was living in Perkins Township; his occupation was listed as farmer. William's wife Anna was age 21. William and Anna Wallace were the parents of three children: Frank, Matthew, and Elizabeth, all under the age of five.

It is so sad to think of William Wallace losing his life at such a young age. He was brave enough to come to America from Scotland. He was probably full of hopes and dreams, which were all cut short due to his untimely death in a railroad accident.
Posted by Dorene from Ohio at 1:30 AM 0 comments According to his tombstone at Oakland Cemetery, John Landeck was born on January 11, 1813, and he died on September 11, 1869. In the 1860 U.S. Census, there is a J. Landick who was listed as  a native of Bavaria. He was age 42 and lived with his wife and five youngsters in Sandusky, Ohio. His occupation was given as: laborer. The Oakland Cemetery interment card for John Landeck states that his cause of death was consumption. He was buried in Block 67 of Oakland Cemetery. The clasped hands which are found above Mr. Landeck's name on his tombstone represent the welcome into the heavenly realm.
Posted by Dorene from Ohio at 1:30 AM 0 comments 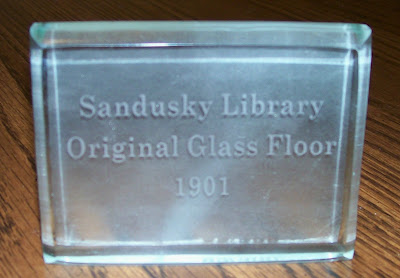 When the Sandusky Library opened to the public in 1901, one of the special features of the new library was the glass floor in the library stacks. Since the building was built before electricity was in use, the glass floor allowed light from the gas lamps to extend to the lowest level of the library building. During the Sandusky Library's major renovation and addition project, from 2001 to 2003, several sections of the original glass floor were cut, polished, and engraved, and sold at the Library's Gift Shop (no longer in operation.)

Recently, at a celebration of one of those special "decade" birthdays, my co-workers gave me a gift of a Sandusky Library 1901 Glass Floor Commemorative Paperweight. It was paperweight number 69, to remember the first year I began working at the Sandusky Library, in 1969. I can still recall so vividly recall the excellent mentoring I received from Miss McCann, Miss Fievet, Mrs. Boylan, Mrs. Doyle, Miss Miller, Mrs. Gosser, Mrs. Kuemmel, Mrs. Schropp, Mrs. Smith, and so many other library staff members in those early days. Even now, I am still continuing to learn, under the leadership of several outstanding librarians. This is a gift I will treasure always! Thanks, my library family! 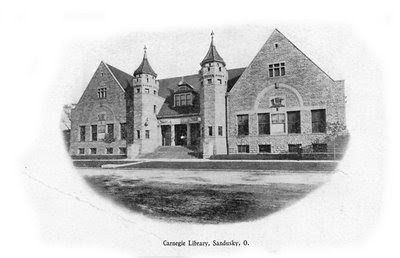 Posted by Dorene from Ohio at 1:03 AM 0 comments 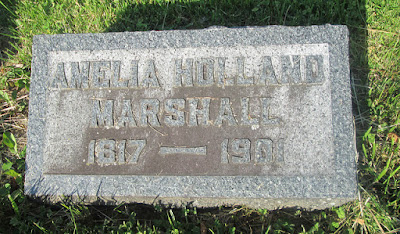 According to a brief obituary which appeared in the Firelands Pioneer, Amelia Holland was born in County Galway, Ireland. She came to the U.S. in 1823 with her parents, and they settled in Sandusky, Ohio. In 1835 Amelia Holland married William Marshall. They had a large family of seven children. Mrs. Amelia Holland Marshall died on September 1, 1901, She was buried in Sandusky's Oakland Cemetery.