John E. Goss, Member of the Woodmen of the World 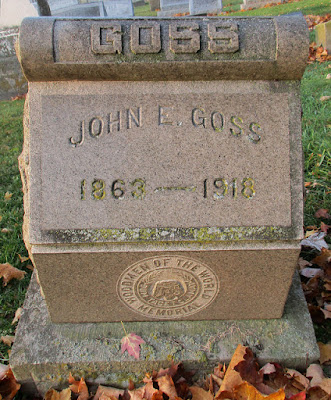 John Edward Goss was born in Port Clinton, Ohio in 1862 to Frederick and Anna Goss.  In 1880 the Goss family resided in Ottawa County, Ohio. By 1917, John E. Goss was residing in Columbus, Franklin County, Ohio, where he worked as a carpenter. John E. Goss died in Columbus, Ohio on November 25, 1917. His remains were returned to Sandusky, for burial in the family lot at Oakland Cemetery.  (Note, though the tombstone of John E. Goss lists 1918 as his year of death, his death certificate listed his death year as 1917.) A Woodmen of the World insignia is found on the tombstone of John E. Goss. Woodmen of the World was a fraternal organization that provided insurance benefits to its members. 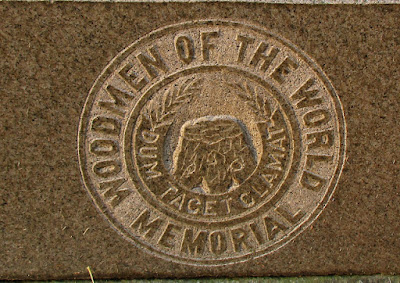 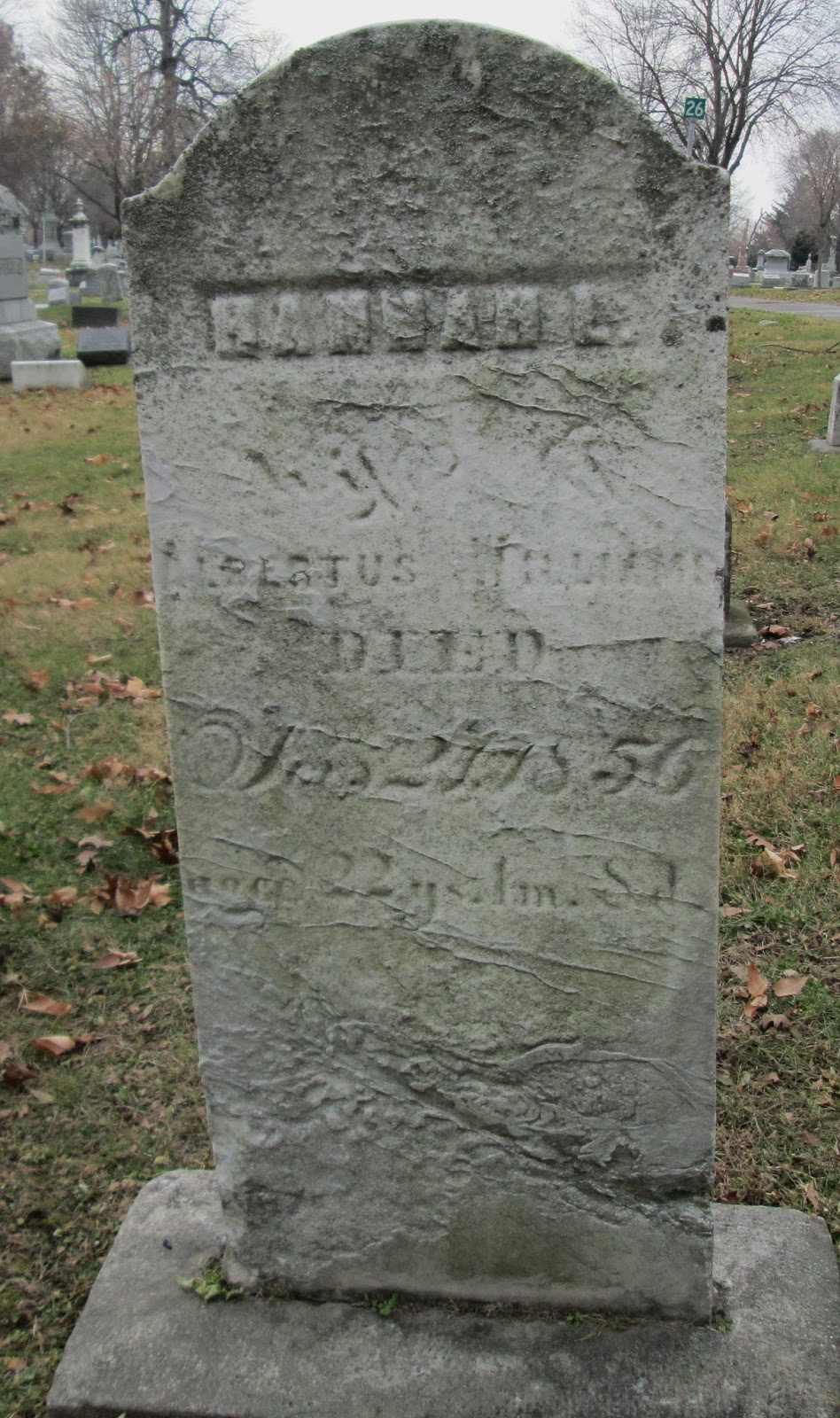 It is so sad that Hannah Dewitt Williams died when she was only 22 years old. She was buried at Sandusky's Oakland Cemetery, in Block 16. Rest in peace, Hannah. 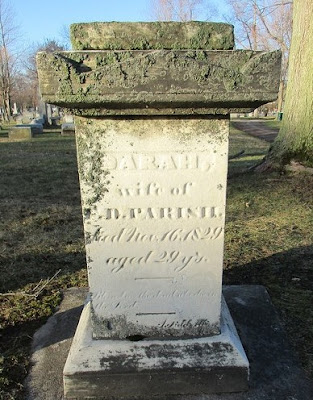 Mrs. Sarah Parish, the wife of F. D. Parish, died on November 16, 1829 at the age of 29 years. According to Huron County marriage records, Sarah Strong had just married Francis D. Parish on January 18, 1829. How sad for Mr. Parish to lose his wife in their first year of marriage! An inscription at the base of the tombstone of Sarah Parish at Oakland Cemetery reads:

Blessed are the dead that die in the Lord.
Posted by Dorene from Ohio at 1:30 AM 0 comments 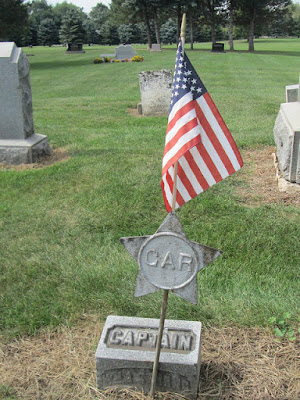 William Augustus Strong was born in Groton Township, of what was then Huron County, Ohio, to Mr. and Mrs. Lyman Elderkin Strong. During the Civil War, William A. Strong enlisted in Company E of the 72nd Ohio Volunteer Infantry. Though his tombstone and obituary state that he was a Captain, his military record on file at Ancestry Library Edition states that he achieved the rank of 1st Lieutenant during his military service in the Civil War.  During the Vicksburg campaign, William Strong suffered a heat stroke, from which he never fully recovered. On April 4, 1898, William A. Strong died in Cook County, Illinois. His remains were returned to Ohio, where he was buried in the Strong's Ridge Cemetery in Huron County, Ohio. This obituary for William A. Strong appeared in the April 11, 1898 issue of the Norwalk Reflector. 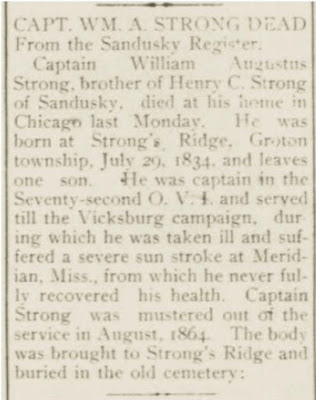 Rest in peace William A. Strong.
Posted by Dorene from Ohio at 1:30 AM 0 comments 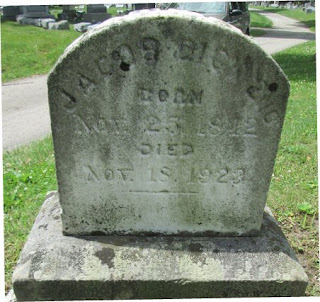 According to his death certificate, Jacob Dick was born in Germany in 1842 to Jacob Dick and his wife, the former Philippina Schramm. He married Katherine Grill in Bavaria, Germany in 1866. Jacob and his wife emigrated to the United States, and settled in Sandusky, Ohio, where he worked as a foreman at the Gilcher and Schuck lumber company. On November 18, 1923, Jacob Dick passed away after a brief illness. He was survived by his widow and five daughters, Mrs. Adam Denhard of Sandusky, Mrs. Albert Niehaus of Chicago, Mrs. Charles Mealley and Mrs. Fred Snyder of Cleveland, and Mrs. Thomas Linfitt of Grand Forks, North Dakota; and two sons, Jacob Dick of Chicago, and William Dick of Los Angeles; a brother, and twelve grandchildren and nine great-grandchildren. An obituary for Jacob Dick appeared in the November 20, 1923 issue of the Sandusky Register. Funeral services were held at the family residence, and burial was at Oakland Cemetery.
Posted by Dorene from Ohio at 1:30 AM 0 comments 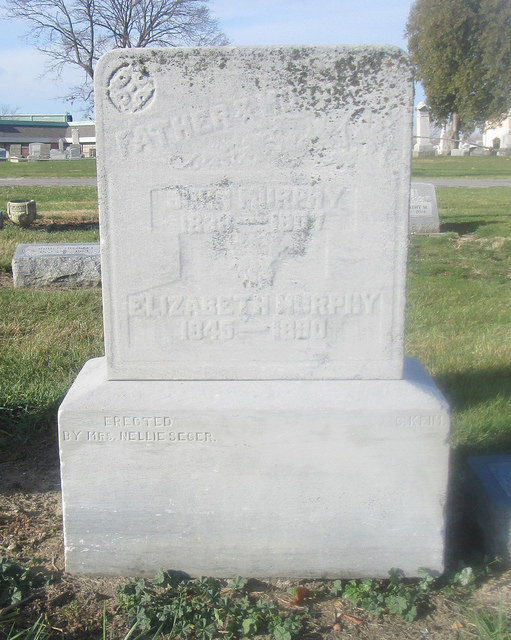 In the 1880 U.S. Census, John Murphy was residing in Sandusky, Erie County, Ohio. He was age 46, and he was a native of Ireland. His wife, Lizzie, was 44 years of age, and they had three children:  Ellen, Peter and Sallie. John was employed at a handle factory. Mrs. Elizabeth/Lizzie Murphy died in 1890. At the time of his death, in November of 1907, John Murphy had moved to Chicago, Illinois. After his death, his remains were returned to Sandusky, Ohio for burial at the St. Joseph Cemetery.  This lovely monument, created by Conrad Keim, was erected by Mrs. Nellie Seger in honor of her parents.