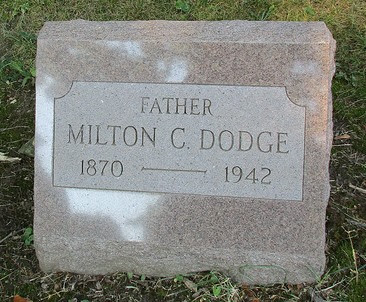 Milton C. Dodge was born in Ottawa County, Ohio in 1870  to Mr. and Mrs. Wyman Dodge.  By 1880, Milton’s mother was a widow, and the family, which consisted of Sarah Dodge and her three children, was residing in Monroeville, Ohio. In 1897,  Milton C.  Dodge married Katherine Elizabeth Ohlemacher. The Milton C. Dodge family lived in Sandusky, Erie County, Ohio in 1910. By this time Mr. and Mrs. Dodge had two sons, named Howard and Lehman. Milton C. Dodge died on December 31, 1942. He was residing in Akron, Ohio at this time and had previously been employed at Goodyear Aircraft.  Mr. Dodge’s remains were brought to Sandusky, Ohio, for burial at Oakland Cemetery. 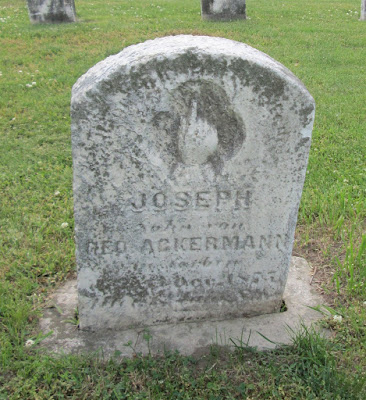 Joseph Ackermann was born in 1863. In the 1870 U.S. Census, he was listed in the household of George and Catherine Ackermann, along with his five siblings, in Berlin Township, Erie County, Ohio.  Joseph Ackermann died at the age of 12, on December 1, 1875, and he was buried in Perkins Cemetery in Erie County. The finger pointing upwards on his tombstone represents the hope of heaven.
Posted by Dorene from Ohio at 1:30 AM 0 comments