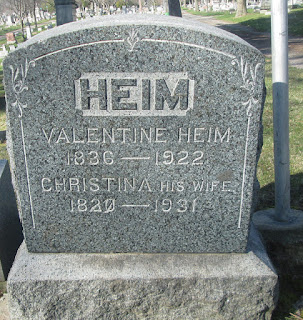 Valentine Heim was born about 1830 in Germany. By 1852, he was residing in Sandusky, Ohio, working as a merchant tailor. That year he married Christina Engel, who had been born in Saxony, Germany in 1827. Mrs. Christina Heim was once considered to be the oldest living resident of Sandusky, Ohio. On her 100th birthday, she visited Cedar Point and danced on the dance floor of the Coliseum. She used to say, "Dancing is good for you." During the Christmas season, Christina enjoyed baking Christmas cookies. Valentine Heim died in 1922, at the age of 92. Mrs. Christina Engel Heim died on March 29, 1931, at the age of 103. She was survived by four children, Mrs. Bertha Bender, Mrs. Emma Kromer, Mrs. Carrie Civilear and William Heim. She was also survived by several grandchildren , great grandchildren, and great great grandchildren. Funeral services for Mrs. Christina Heim were conducted by the Charles J. Andres Sons. Both Mr. and Mrs. Valentine Heim's final resting place is Oakland Cemetery.
Posted by Dorene from Ohio at 1:30 AM 0 comments 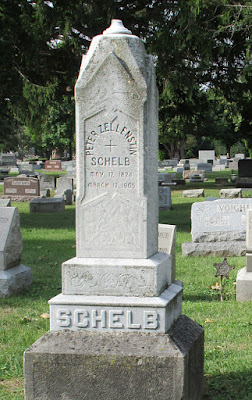 Peter Z. Schelb was born in Germany in 1824. He came to the U.S. in the 1840s. During the Mexican War, Peter Schelb served in Co. C of the 13th Infantry. Peter Schelb died on March 12, 1905. He was survived by his wife, three daughters, and two sons. Funeral services were held at Krupp's chapel in the Mahala Block in Sandusky, and burial was at Oakland Cemetery. A lovely monument honors the memory of this German born Veteran who served his new country well. Obituaries for Peter Schelb appeared in the Norwalk Reflector on March 14, 1905, and in the Sandusky Register on March 13 and March 14, 1905.
Posted by Dorene from Ohio at 1:30 AM 0 comments 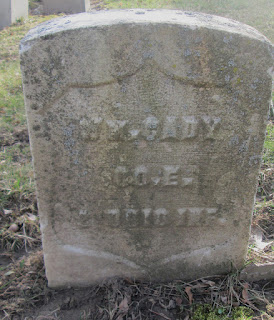 William Cady was a grocer in Sandusky in the 1860s. He was married to Caroline, whose maiden name was Jennings. During the Civil War, William Cady served for three months in Company E, Ohio 8th Infantry. He died of consumption when he was only 42 years of age, in March of 1864. William Cady was buried in Sandusky’s Oakland Cemetery. His wife lived to be into her 90s. Mrs. Cady passed away in April of 1905. You can read the obituary of Mrs. Cady at in this post from the Sandusky History website.
Posted by Dorene from Ohio at 1:30 AM 0 comments 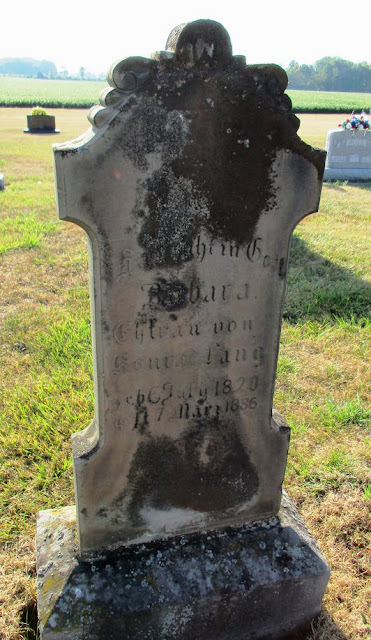 Barbara Lang was born in Wuertemberg Germany in July of 1820, and she died in Crawford County, Ohio on March 7, 1886. In the 1880 U.S. Census, Barbara was residing with her husband Conrad Lang, a farmer, in Chatfield, Crawford County, Ohio, along with several of their children. Mrs. Barbara Lang was buried in the Lutheran Cemetery in Chatfield, Ohio, now known as the Nazareth Lutheran Cemetery. An inscription at the top of Barbara's tombstone reads:

which in English is translated 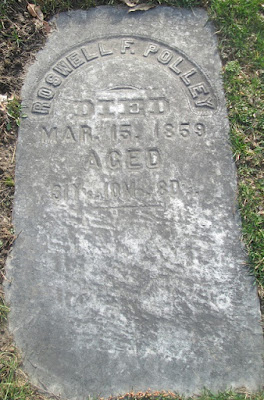 This flat stone at Oakland Cemetery honors the memory of Roswell F. Polley. Mr. Polley was born in 1827. In 1850, he was residing in the state of New York.  In 1851, Roswell married Urania Davis. That same  year, Mr. and Mrs. Polley moved to Sandusky, Ohio. Roswell F. Polley died on March 15, 1859, at the age of 31 years, 10 months, and 8 days. His wife went on to become a well respected dressmaker in Sandusky. 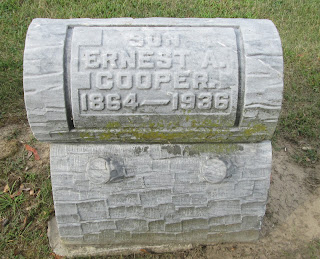 Ernest Al Cooper was the chief clerk for the CCC & StL Railroad  (the Big Four)  in Sandusky, Ohio for forty years. He was born in London, England to Mr. and Mrs. Charles Cooper. While his death certificate state he was born in the year 1854, his tombstone gives his birth year as 1864. After an illness of two days, Mr. Cooper died at the Good Samaritan Hospital in Sandusky on August 4, 1936. He was buried in Oakland Cemetery in Sandusky, Ohio. An obituary for Ernest A. Cooper appeared in the August 5, 1936 issue of the Sandusky Register.
Posted by Dorene from Ohio at 1:30 AM 0 comments