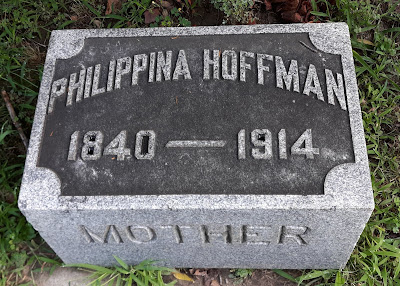 Philippina Fuchs Hoffman was the wife of businessman Daniel Hoffman. She must have kept very busy, as she was the mother of eight children. Born in , she emigrated to the in 1867, the same year that she married Mr. Hoffman. Mrs. Hoffman passed away in on August 21, 1914. The following obituary appeared in the August 22, 1914 issue of the Sandusky Register. Mrs. Hoffman was laid to rest in the family lot at Sandusky's Oakland Cemetery.
Posted by Dorene from Ohio at 1:49 AM 0 comments