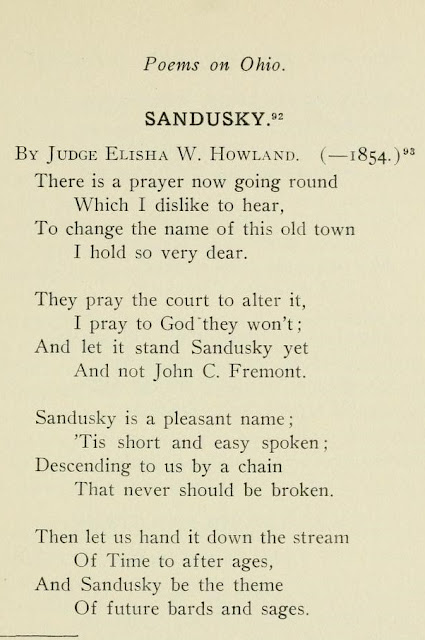 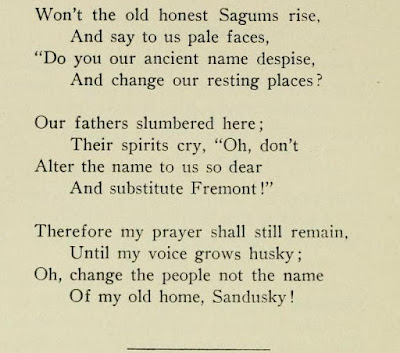 Sandusky is the name of a river, a bay, a county, a city, and is included in the name of the community of Upper Sandusky. Because of the many uses of Sandusky as place names, I am quite thankful that Fremont is now known as Fremont, and not Lower Sandusky! This poem appeared on pages 117 and 118 of the book Poems on Ohio, collected and annotated by C.L. Martzloff (Ohio State Archaeological and Historical Society, 1911.) Today the former home of Rutherford B. Hayes is open for tours. The Hayes Presidential Library and Museums is to a wonderful library filled with books about genealogy and local history, as well as a museum and historic home. 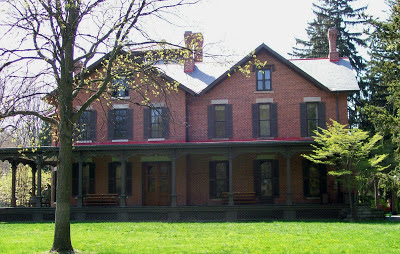 Posted by Dorene from Ohio at 8:38 AM 1 comments

According to the "hit list" I retrieved when I did a search in Searching Ellis Island in One Step, my great great grandfather, Joseph Orshoski/Josef Orsoczky may have passed through Ellis Island several times between 1893 and 1907. Below are some of the listings at Ellis Island.

In 1893, Josef Orsoczky traveled to Ellis Island, at the age of 33, on the ship Noordland from Antwerp. According to records 22 through 25, as well as numbers 30 and 32, he made the trip across the ocean several more times. My Uncle Wayne once told me that Granda Joe, my great grandfather, had a close relative who came to America, but he missed his homeland of Hungary too much, and he returned there to live. When Great Great Grandpa Josef Orsoczky visited in 1907, did he see my paternal grandfather Steve Orshoski? So many questions I wish I had asked my great grandfather! I am so glad that he stayed in the U.S., and did not return to his homeland like his father! Miss you Grandpa and Grandma! 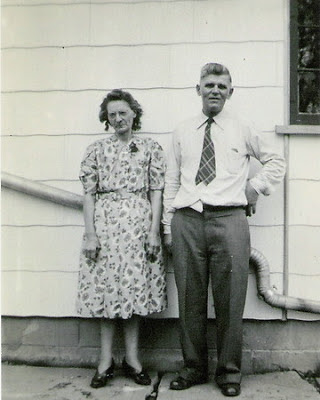 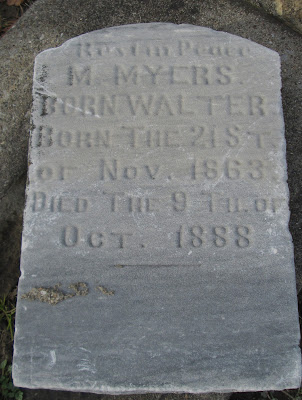 The picture of this  over a century old tombstone was taken at St. Mary's Cemetery in Sandusky, Ohio. M. Myers was born with the surname Walter, but she married a man with the surname Myers, sometimes spelled Meyers. She was born on November 21, 1863, while the Civil War was still ongoing, and she died as a young woman on October 9, 1888. By browsing through the digitized images of St. Mary's Church records, available at FamilySearch in the collection of church records from the Toledo Diocese, I came across a baptism record of M. Catherine Myers. She was baptized in December of 1863, the daughter of Richard Walter and Marie Anton Walter. I believe the initial M stands for Mary, which was often used as a first name for females baptized in the Catholic faith. 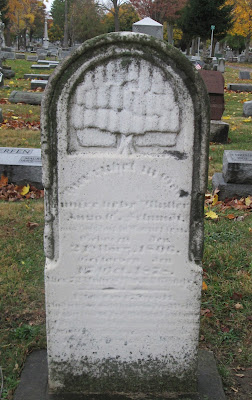 This beautiful monument in Block 44 of Sandusky’s Oakland Cemetery honors the memory of Mrs. Anne Elizabeth Schmidt. According to her interment card, Mrs. Schmidt died of heart disease in October of 1878 at the age of 75. Though the words on the tombstone are very weathered, Anne’s birth year of 1806 is still legible. A death record for Anne/Anna Schmidt indicates that her parents were Conrad and Anna Shildwachter, and she had been born in Germany. A lovely tree adorns the top of Anne’s grave marker.
Posted by Dorene from Ohio at 1:30 AM 0 comments 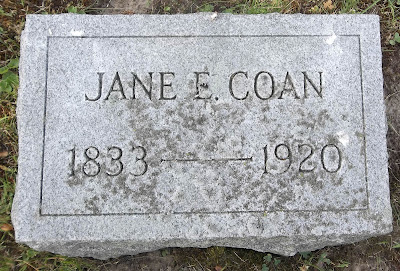 According to the book A Genealogical History of the Kelley Family, Jane Elizabeth Coan was the daughter of Daniel Camp and Lydia Frothingham, born in Connecticut on March 26, 1833. Jane's father died when she was only three years of age. Jane's sister Lydia became the husband of Sandusky resident George J. Anderson. In the 1880 U.S. Census, Jane E. Coan was residing with her uncle, Edward Jewett, in Margaretta Township, Erie County, Ohio. In 1900, she was still in Margaretta Township, living with her widowed aunt, Mrs. Elizabeth Jewett. By 1910, Jane E. Coan was listed in the census as a farmer in Margaretta Township, and she was the Head of the Household at that time. In 1920, census records show that Jane E. Coan had moved to Sandusky, Ohio, where she lived with the family of her nephew, George F. Anderson. On May 30, 1920, Jane E. Coan passed away at the age of 87. She lived her life as a maiden lady, often residing in the household of extended family members. Reading between the lines, I think she served as a helper to her family, sharing in their daily lives. Jane Elizabeth Coan was buried in Sandusky's Oakland Cemetery.
Posted by Dorene from Ohio at 1:52 AM 0 comments 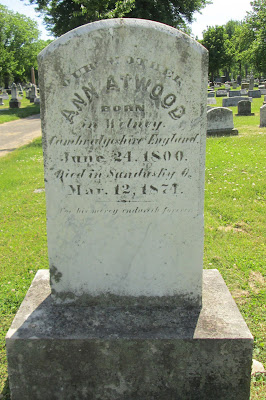 Ann Atwood's tombstone in Sandusky's Oakland Cemetery states that she was born in Welney, England on June 24, 1800. She died in Sandusky, Ohio on May 12, 1874. An inscription on Mrs. Atwood's stone reads:

For his mercy endureth forever

Posted by Dorene from Ohio at 1:10 AM 0 comments 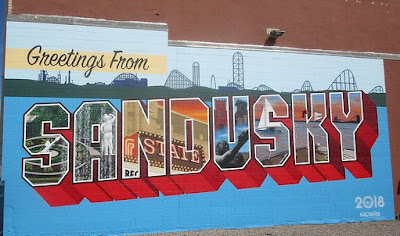 This beautiful mural, painted on the outer wall of Sandusky's State Theatre was recently completed. Our fair city will soon celebrate it Bicentennial. Many of my ancestors were born, or resided in, or frequented the city of Sandusky. To learn more about the history of Sandusky, visit the website of the Sandusky2018. In 2018, there will be many social and historical events to commemorate the city of Sandusky and its rich history! 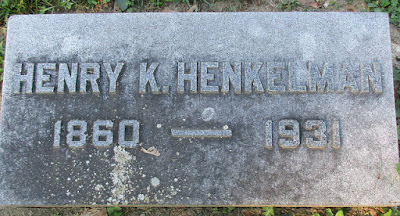