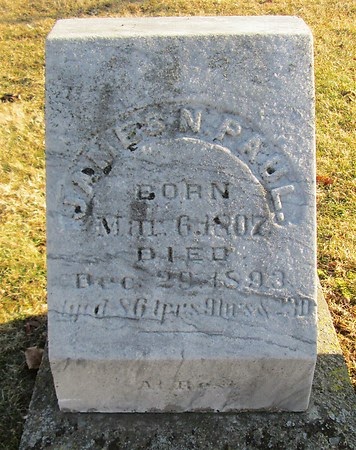 James N. Paul was born March 6, 1807. In 1870, James N. Paul was living in Sandusky, Erie County,  Ohio, with his wife, listed only as M.A. Paul, and their children, Charles, Harry and Alice. James worked as a ship carpenter. By 1880, Mr. and Mrs. Paul had in their household their son Charley, and two grandsons. James N. Paul died on December 29, 1893, at the age of 86 years, 9 months, and 23 days. At the very base of Mr. Paul's tombstone are the words, "At Rest." James N. Paul was buried at Sandusky's Oakland Cemetery. A brief obituary for James N. Paul appeared in the January 1, 1894 issue of the Sandusky Register.  Funeral services for Mr. Paul  had been held at the residence of his son Charles Paul on Meigs Street, with Rev. P. F. Graham of Trinity Methodist Church officiating.
Posted by Dorene from Ohio at 1:30 AM 0 comments

Randy at GeneaMusings asked us what Genea-Santa brought us this year.  My favorite gift from Genea-Santa was a hug from my nephew Matthew, who came to the family Christmas all the way from Georgia! Matthew is named after my brother (his uncle) who is also named Matthew. Here is a photo of my two Matthews on Christmas Day.

Thanks for the hug from Georgia! I sure do love my family!

Posted by Dorene from Ohio at 3:44 PM 0 comments 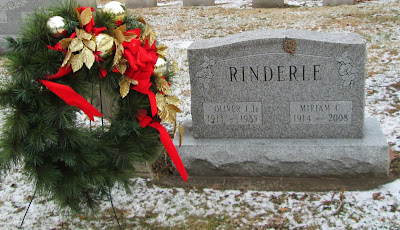 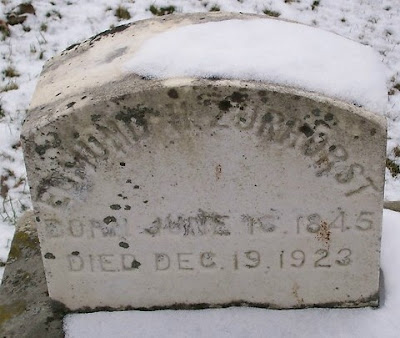 Hewson Peeke, in his STANDARD HISTORY OF ERIE COUNTY, wrote that "On the business history of the City of Sandusky there appears the name of Edmund H. Zurhorst written in bold and legible characters." Edmund Zurhorst was born in June of 1845 in Montreal, Canada, to William H. and Letitia (McKenna) Zurhorst. The family moved to Ohio in 1849.

Edmund Zurhorst found employment on lake and ocean vessels as a young man, and served in the United States Navy during the Civil War. After the war, he built and operated two steamers on the Great Lakes. Branching out into many different businesses, he became associated with the railroad, a lime company, and several other local businesses. During President Arthur 's administration he held the office of assistant in the New York office of the U.S. Customs House, and he has also acted as deputy collector of internal revenue for the Northern District of Ohio and as collector of customs for the Sandusky, Ohio, District. He was very active in the Republican Party.

Often Edmund H. Zurhorst and his wife wintered in Hollywood, California. Edmund became ill in December of 1923, and he died on December 19. A lengthy obituary for Edmund H. Zurhorst appears in the 1923 OBITUARY NOTEBOOK, housed in the Archives Research Center of the Sandusky Library. The title of the article refers to E. H Zurhorst as an "Old School Politician." The obituary begins: "One of the picturesque personages of partisan politics of Sandusky and vicinity 20 to 30 years ago, was Col. Edmund H. Zurhorst, 78, taken by death Wednesday at Hollywood, Cal." Zurhorst was regarded as a relentless for in his political involvement, but in later years he took pride the "machine like" methods used in the old days. The article continues, "They called me a boss,...but I wasn't. I used to have the boys gather around me and then I'd tell 'em how I thought things ought to be done. They just generally agreed with me, that was all there was to it." Among the personal friends of Mr. Zurhorst were President Arthur, President McKinley, and the late Senator Marcus Hanna.

Edmund H. Zurhorst, and his wife Harriet, who died in 1890, are both buried in the family lot at Sandusky's Oakland Cemetery. A funeral took place for Edmund H. Zurhorst in Hollywood, California, conducted by the Knights Templar of Hollywood. Many former Sanduskians attended the funeral.

For more information about Edmund H. Zurhorst, read about him in the HISTORY OF THE WESTERN RESERVE, available at most larger Ohio libraries, and appearing online at Google Books.
Posted by Dorene from Ohio at 4:52 AM 0 comments 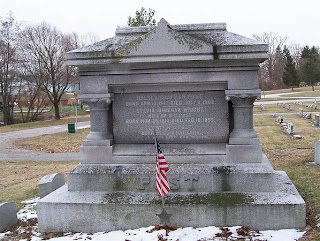 Halsey Chapman Post was well known merchant in Sandusky, Ohio. Mr. Post was born in Clinton, Connecticut in 1813. He moved to Sandusky, Ohio in the 1850's, and soon after settling in Sandusky, Ohio, Mr. Post became engaged in the lake fish business. He continued in that business until his death. H.C. Post was also associated with several other local business ventures, including the Sandusky Tool Company, the Sandusky Electric Light Company, and the White Line Street Railway.

Several pages from Sandusky of Today related to the history of the fishing industry in Sandusky are found at the Ohio Memory Collection website.
Posted by Dorene from Ohio at 4:39 AM 0 comments 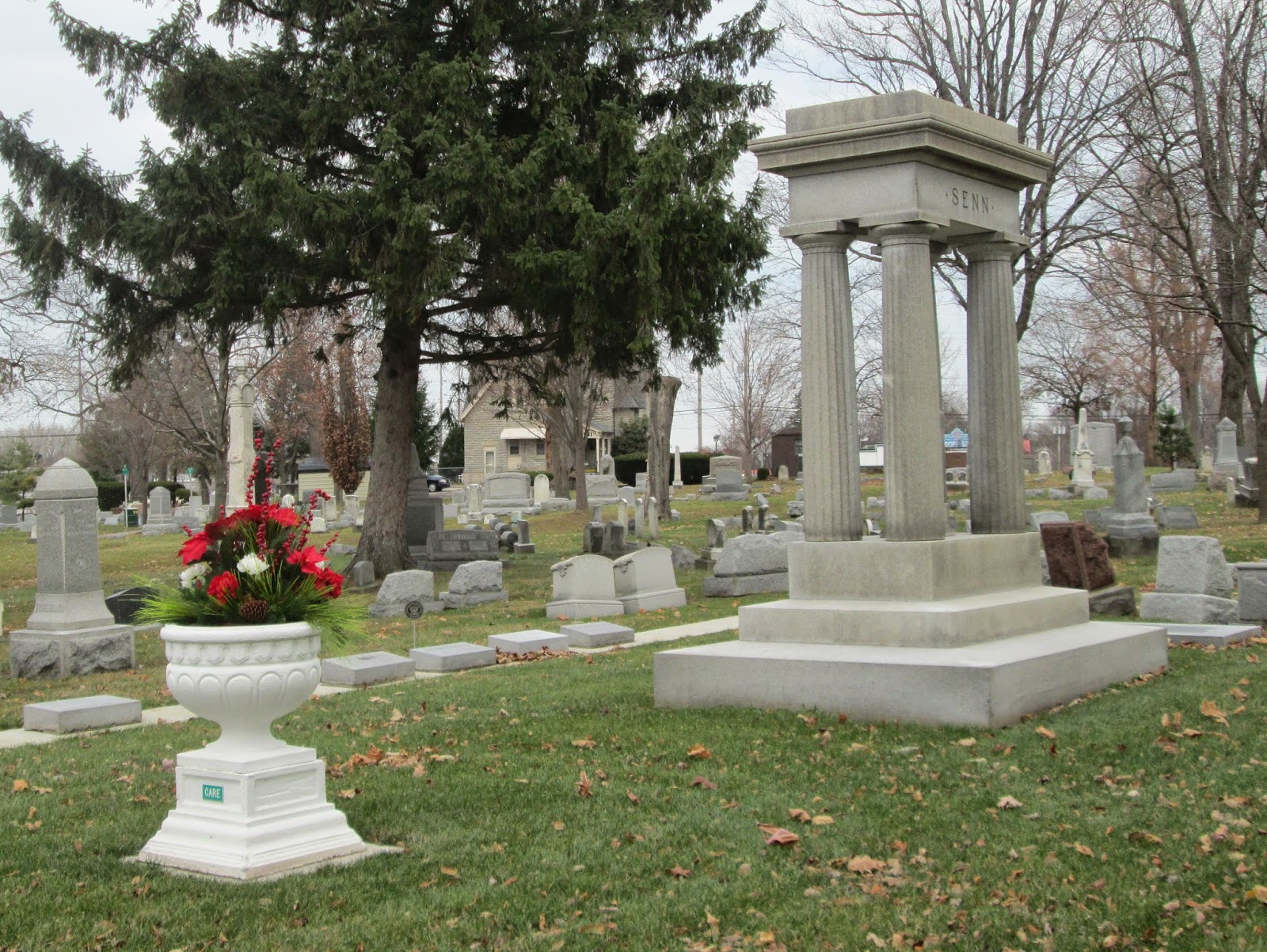 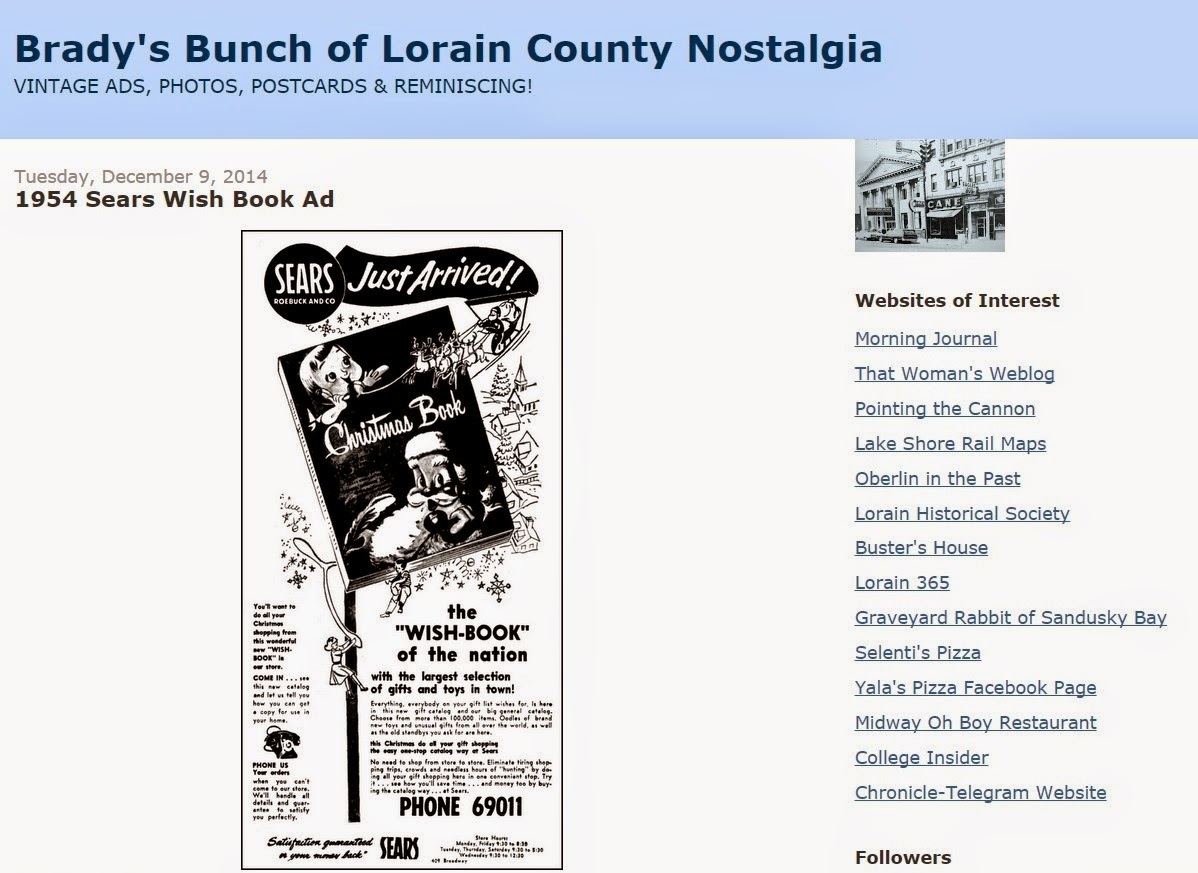 Check out this awesome post about the old Sears Wish Book at Brady's Bunch of Lorain County Nostalgia!  It surely brought back many happy memories of my childhood days looking forward to Christmas! Thanks for the memories!
Posted by Dorene from Ohio at 8:24 PM 0 comments 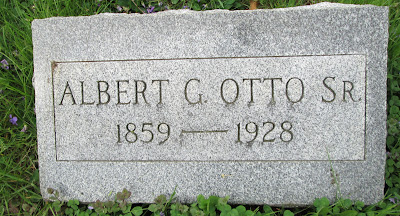 According to his death record, Albert G. Otto was born in Long Island, New York to F.J.M. Otto and Sophia (Hutter) Otto, both natives of Hamburg, Germany. In 1884, Albert G. Otto earned a law degree from the University of Michigan. He practiced law for several years in Indianapolis, Indiana. By 1928, Albert G. Otto had moved back Sandusky, Ohio. He died from heart disease on December 16, 1928. He was survived by his wife, three daughters, a son, and four grandchildren. Funeral services for Albert G. Otto were conducted by Rev. T.J.C. Stellhorn, and burial was in Sandusky's Oakland Cemetery. An obituary for Albert G. Otto, Sr. appeared in the Sandusky Star Journal on December 17, 1928.
Posted by Dorene from Ohio at 1:00 AM 0 comments 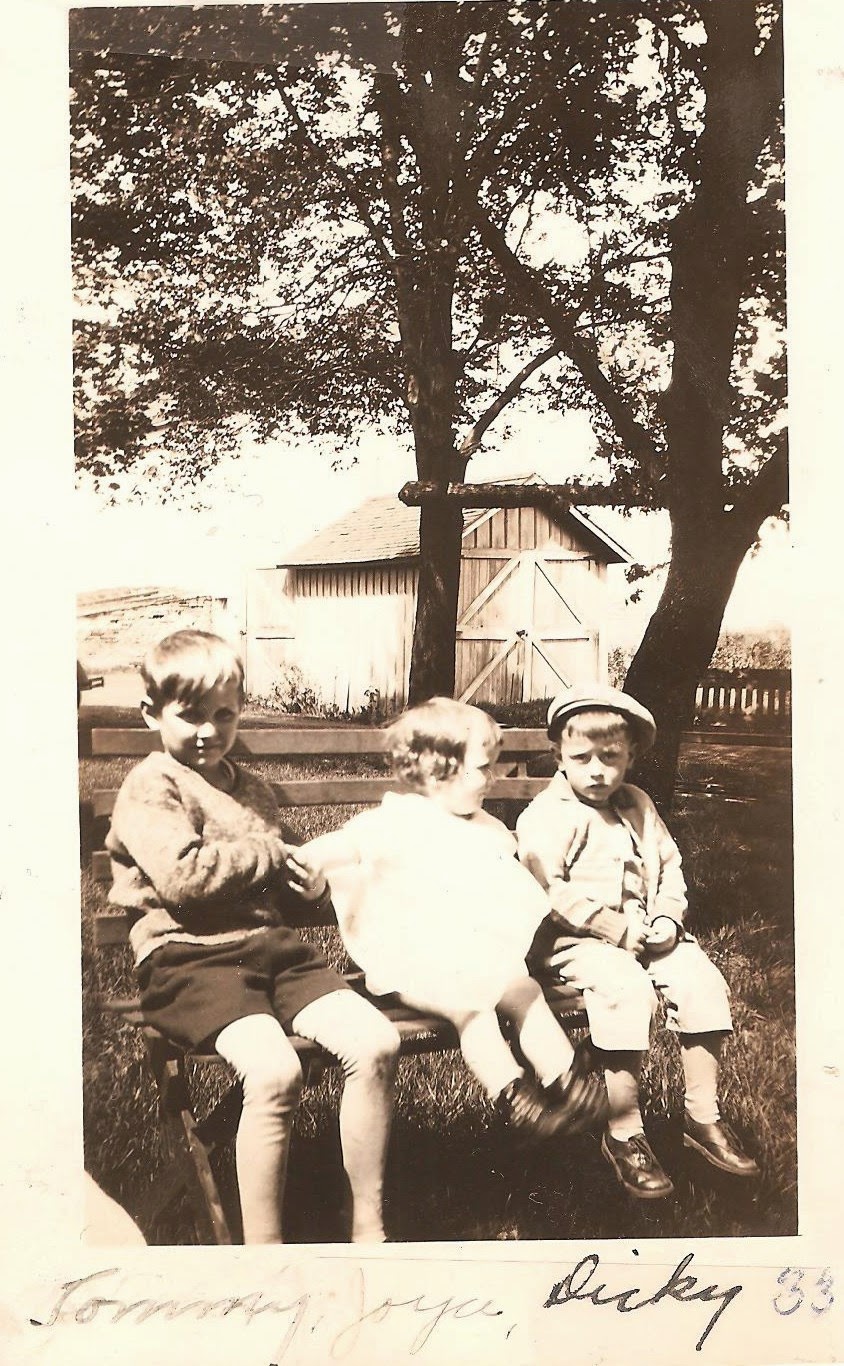 This past year I moved, and I keep finding things in assorted closets and drawers around our new place. This weekend  I ran into this picture of my mom, her brother, and her cousin from 1933. Pictured are: Steen Thomas "Tommy" Parker, Joyce Parker, and Richard "Dickie" Parker. They are at the farm of their grandparents, Leroy and Ada Parker. The Parker grandchildren loved to go to Grandma and Grandpa Parker's farm. They got together often, and holidays were especially memorable.
Posted by Dorene from Ohio at 12:39 PM 0 comments 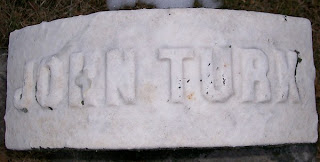 John Turk was elected Judge of the Common Pleas Court for Huron County in 1832. He died in the fall of 1834 in Green Creek Township of Sandusky County, Ohio, according to a Rootsweb site. He was buried in Sandusky's Oakland Cemetery in Block 16. 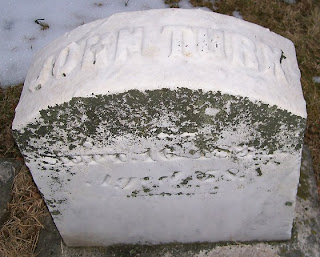 Posted by Dorene from Ohio at 4:53 AM 0 comments 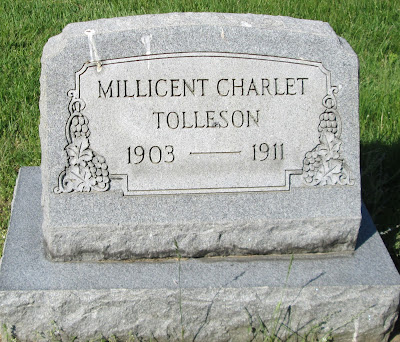 This lovely monument in memory of Millcent Charlet Tolleson is found in the western section of Sandusky's Oakland Cemetery. According to her death record, on file with Family Search, Millicent C. Tolleson was born on August 3, 1903 to Victor and Rachel (Meinzer) Tolleson. She passed away on April 13, 1911, after a brief illness. An obituary in the April 14, 1911 issue of the Sandusky Register stated that Millicent C. Tolleson was survived by her parents and one sister.
Posted by Dorene from Ohio at 1:37 AM 0 comments

This very brief marriage record of Patrick Larkins and Bridget Ryan was found at FamilySearch in the Ohio Diocese of Toledo Parish Records. My great great great grandparents were married at Holy Angels Catholic Church in December of 1856 by Father Alexis Caron. Their names were Latinized in the church records, and Father Caron's first name is not given, just his first initial. The records were very brief at this time. Here is view of the two-page portion of the volume which holds early marriage records from Holy Angels. Patrick and Bridget's names appear at the lower portion of the left page. 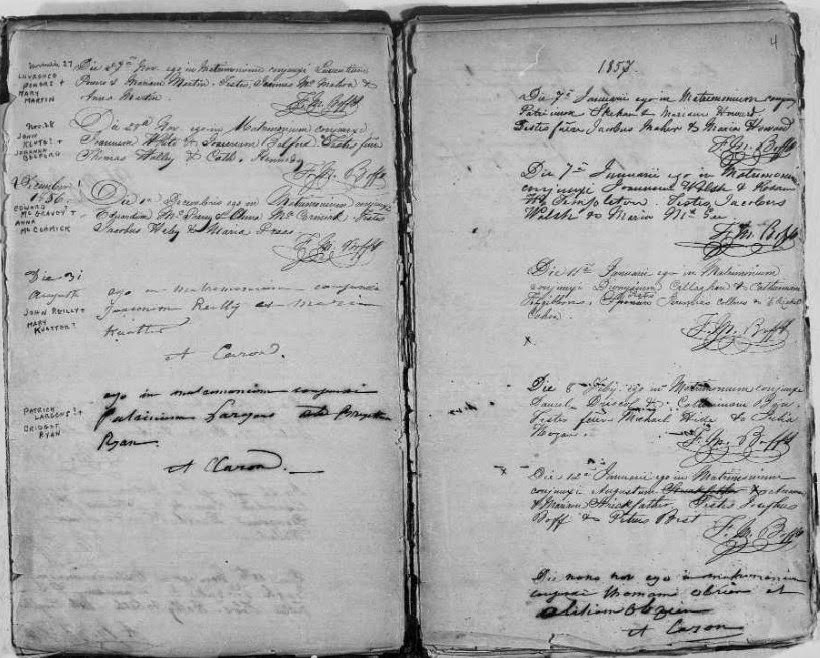 Ancestors on both my Mom's Cross and Larkins lines were very active in Holy Angels Church, which just celebrated its 175th Anniversary. Holy Angels is the oldest church in the Toledo Diocese. While I am not a member of the Catholic church, I am a person of faith, and I treasure the church records we are able to access at FamilySearch! 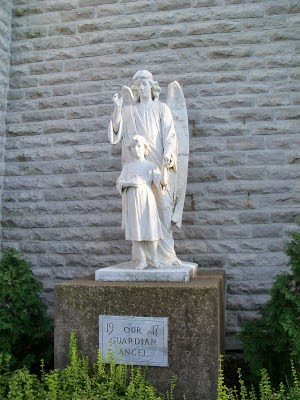 Happy Anniversary to the parish of Holy Angels in Sandusky, Ohio!

Posted by Dorene from Ohio at 2:45 AM 0 comments