According to THE STEEN FAMILY IN EUROPE AND AMERICA,available at the Internet Archive, Charles Armstrong Steen was born in the city of Armagh in Northern Ireland on December 25, 1797. He emigrated to the United States about 1831, settling in Berlin Heights, Erie County, Ohio.

A family story that has been passed down through the generations is that Charles Armstrong Steen was from a noble family. When he fell in love with a peasant girl, his parents sent him to the United States to avoid being disgraced.

In 1842, Charles A. Steen married a widow, Lorenda Stevens Sexton, in Berlin Heights. They had four children: Eliza Jane Steen, David Orlando Steen, Mary Olmstead Steen, and Charles Fabine Steen. In 1858, when baby Charles was only an infant, the father of the family was accidentally drowned. THE HISTORY OF THE WESTERN RESERVE, in a biographical sketch about Benjamin Deeley, reports that Jane/Jennie Steen Deeley's father sold his property in Erie County, and was planning to take the family to Kansas. The story that has been told to the family is that Charles Steen was robbed, after making the sale of his property, and his body was thrown into Sandusky Bay. The Oakland Cemetery interment card states that Charles Steen died of an accidental drowning, and that he was buried on December 6, 1858. However, THE STEEN FAMILY IN EUROPE AND AMERICA, provides the death date as January 12, 1858. 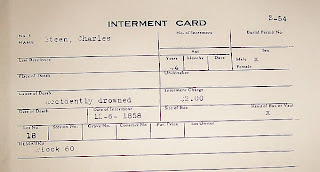 Mrs. Lorenda Steen, now twice widowed, successfully raised her four children in Erie County, Ohio. Eliza Jane (sometimes called Jennie) married a Civil War Veteran, Benjamin Deeley, and they were the parents of six children, including a dentist, a doctor, and two school teachers. David Orlando Steen had a large family also, and his family moved to Oskaloosa, Iowa. Mary O. Steen married George F. Hill, and she served as the postmistress of Berlin Heights for many years. Charles F. Steen married Sarah Nodine Milner. He was a properous farmer in Perkins Township.

While records at Oakland Cemetery state that Charles A. Steen is buried in Block 60, no tombstone remains at Oakland for Mr. Steen. The descendants of Charles Armstrong Steen are numerous, and span from Ohio to Iowa to California. 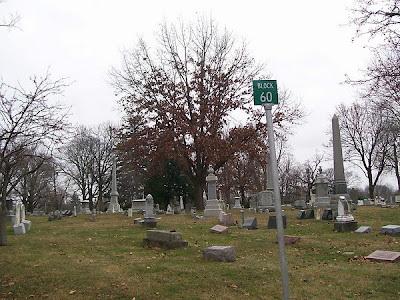 Posted by Dorene from Ohio at 4:27 PM