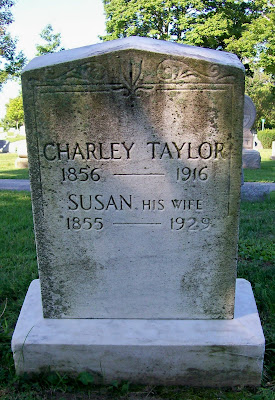 According to his death certificate, Charles "Charley" Taylor was born on January 14, 1856 in Virginia to Thomas and Amanda Taylor. By 1900, Charles Taylor and his wife Susan were residing in Sandusky, Ohio, where Charles worked as a waiter at a hotel. Later Charley was a porter at the New York Central Railroad station in Sandusky. Charles Taylor passed away on March 2, 1916, as a result of chronic liver trouble. Funeral services were held for Charles Taylor at the Taylor residence at 409 Hendry Street, as well as at the Second Baptist Church, under the auspices of the Grand Order of Odd Fellows. Rev. George Smith officiated, and burial was at Oakland Cemetery. Pallbearers for Charles "Charley" Taylor were: George Taylor, William Jones, Luther Jones, Charles Jones, David Anderson, and William Alexander. An article in the March 4, 1916 issue of the Sandusky Star Journal reported that the funeral for Charles Taylor was largely attended, and many beautiful floral offerings were contributed. Mrs. Susan Taylor passed away on July 28, 1929, after battling heart disease. She was buried next to her dear husband Charley at Sandusky's Oakland Cemetery.

Posted by Dorene from Ohio at 1:08 AM 0 comments 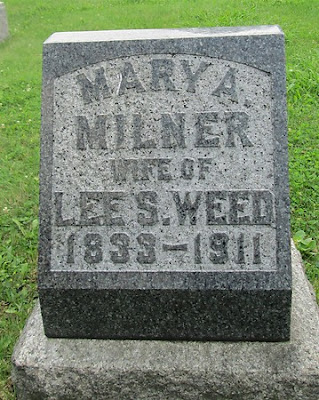 Mary Ann Milner was born in Canada to Thomas and Ann (Bowser) Milner, who were natives of Hull, England. The Milner family moved to Huron, Ohio in 1836. In the 1850 U.S. Census, Mary Ann Milner was residing in Huron Township, Erie County, Ohio with her parents, sister, and brother on the family farm. On July 20, 1858, Mary Ann Milner married John P. Denman. Rev. Samuel Marks, Rector of Christ Episcopal Church, officiated at the wedding.

Sadly, John P. Denman died in 1865, when he was only 35 years of age. He was laid to rest at Sandusky's Oakland Cemetery. The clasped hands on Mr. Denman's tombstone symbolize the welcoming of John P. Denman into the Heavenly kingdom. 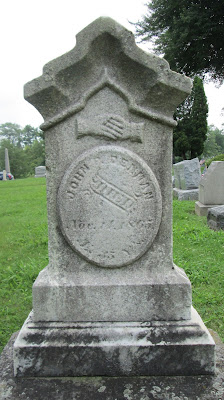 In the 1870 U.S. Census, Mary Ann Denman and her eleven year old son Dell were living with Mary Ann's parents, Thomas and Ann Milner in Perkins Township, Erie County, Ohio. An article in the April 11, 1949 issue of the Sandusky Register Star News listed Mary Ann Denman as one of the charter members of the Perkins Grange, which was organized on March 2, 1874. On October 27, 1885, Mrs. Mary Ann Denman married Perkins resident Lee S. Weed. On April 16, 1911, Mrs. Mary Ann Weed died after contracting pneumonia. She was laid to rest in the North Ridge section of Oakland Cemetery, not far from the tombstones of her parents Thomas and Ann Milner. Mary Ann's son from her first marriage, Dell Denman, had died in 1880, as a young man. Mrs. Mary Ann Milner Weed suffered the loss of her first husband, and her son; and she moved several times during her lifetime. In the times in which she lived, I am sure she worked very hard on the farms of her parents and her second husband Lee. Reading between the lines, I think Mary Ann Milner Weed made the best of the situations in which she found herself. Mary Ann was the sister of Henry Milner, who was the adoptive father of my great great grandmother, Sarah Milner Steen. 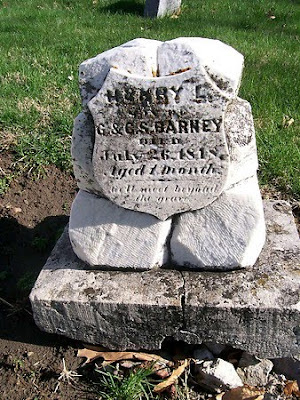 Henry L. Barney, infant son of George and Caroline Stebbins Barney, is buried at Sandusky's Oakland Cemetery. Henry was only one month old when his life was cut short, on July 26, 1848. The inscription on Henry's tombstone reads:

We'll meet beyond the grave

Henry L. Barney is buried in the family lot at Oakland Cemetery. 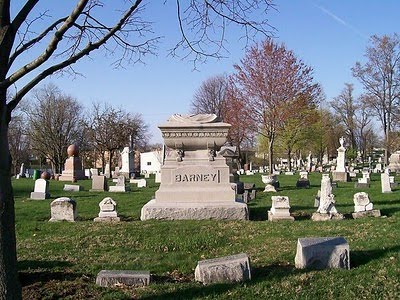 Posted by Dorene from Ohio at 4:58 AM 0 comments

William and Hannah Booth Died in the Cholera Epidemic of 1849

Blessed be the dead that die in the Lord 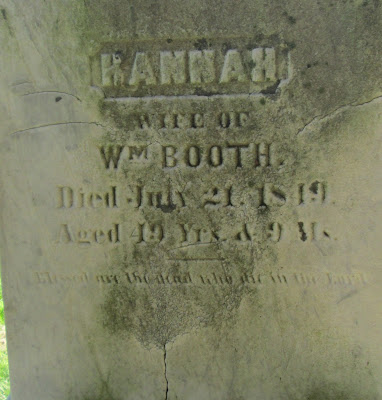 Under the name of William Booth is the inscription:

I know that my redeemer liveth 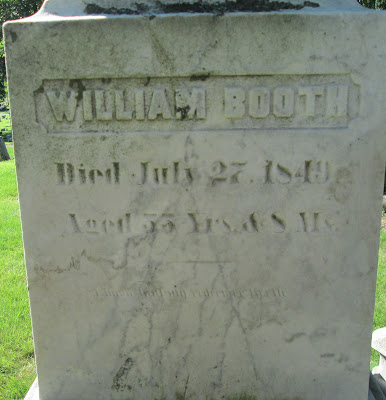 On June 4, 1863,  Mr. and Mrs. Booth's son George died at the age of 38.  The Oakland Cemetery interment card indicates that his remains were brought from Illinois to Ohio for burial. 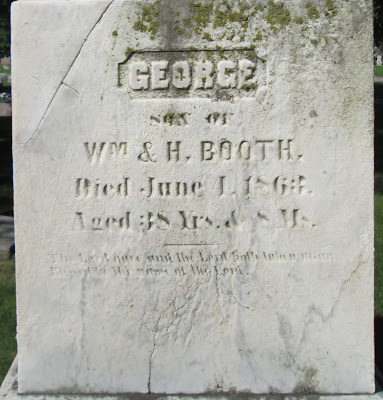 The inscription under the name of George reads:

Well over one hundred years after their deaths, the names of the Booth family members are still quite legible, on this lovely monument which honors their memory. 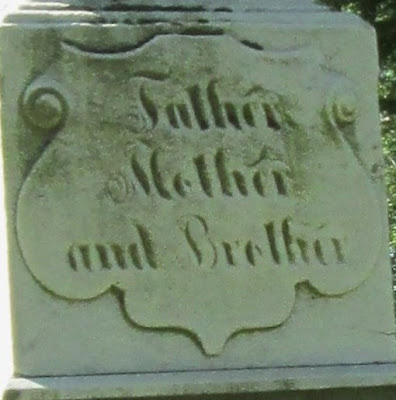 Posted by Dorene from Ohio at 1:00 AM 0 comments 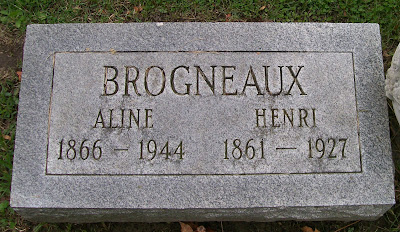 According to his death certificate, Henri Brogneaux (sometimes listed as Henry Brogneaux) was born to Leopold and Felice Brogneaux in 1861. While the death certificate stated that Henri Brogneaux was born in Belgium, the 1920 U.S. stated that he was born in Charlevoix, Canada. By 1920, Henri Brogneaux was residing in Erie County, Ohio, where he was engaged in farming. Henri and his wife, the former Aline Guillaume, were the parents of two sons, Henry, born in in 1886, and Victor, who was born in 1887. On July 15, 1927, Henri Brogneaux passed away in Good Samaritan Hospital in Sandusky, Ohio, following complications from diabetes. An obituary, which appeared in the July 16, 1927 issue of the Sandusky Star Journal, reported that Henri/Henry Brogneaux had been associated with the Sandusky Glass Company, and that he had been a charter member of the French Mutual Society of America. Mr. Brogneaux was survived by his wife, two sons, and four grandchildren. He also was survived by a sister and brother who were living in Belgium. Funeral services for Henri Brogneaux were held at the Charles J. Andres' Sons Funeral Home, and burial was in Oakland Cemetery. Mrs. Aline Brogneaux passed away at the age of 78 on January 17, 1944. Mrs. Brogneaux was buried next to her husband at Oakland Cemetery.
Posted by Dorene from Ohio at 1:36 AM 0 comments

Email ThisBlogThis!Share to TwitterShare to FacebookShare to Pinterest
Labels: Brogneaux 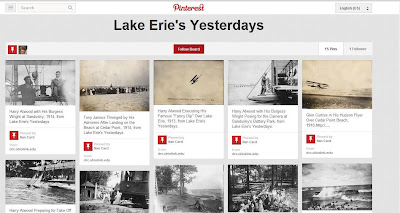 Our friends at the R.B. Hayes Presidential Center have a new Pinterest Board featuring images from Lake Erie's Yesterdays. If you have ancestors from northern Ohio, they most likely heard of some of the amazing individuals and events featured on this board.

Click here to check it out!
Posted by Dorene from Ohio at 11:12 AM 0 comments 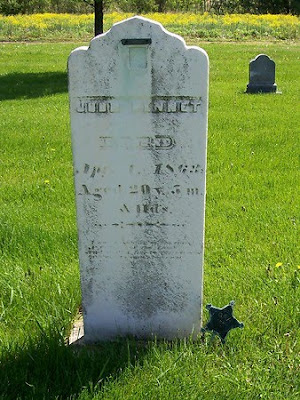 John Bennet, which is sometimes listed as Bennett, is buried in Shook Cemetery in Ottawa County, Ohio. John was a Private in Company G of the 111th Infantry Regiment of Ohio during the Civil War. He was aged 20 years, 5 months, and 11 days at the time of his death.

According to records found in Ancestry Library Edition, John Bennet/Bennett died of disease on April 1, 1863 at Bowling Green, Kentucky. A GAR marker is located beside John's tombstone.

Besides dealing with leaving home, seeing and hearing the horrors of war, illness was also quite common among the troops. This website tells of medical care during the Civil War.
Posted by Dorene from Ohio at 6:34 AM 0 comments

My Co-Worker Has a Running Blog...But She Recently Ran Into Relatives!! 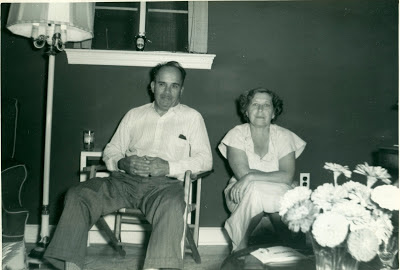 My dear friend and co-worker, who is an avid runner, recently ran into some relatives on Irish Murray side of the family. Read more at:

Great job on the Murray research, Ginny!
Posted by Dorene from Ohio at 3:01 PM 0 comments 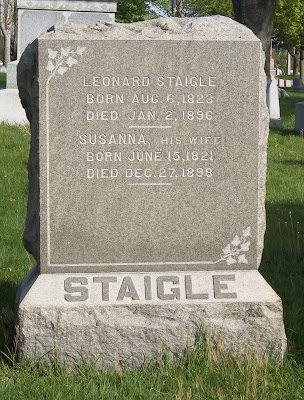 Leonhard Staigle is listed in the Family Register of German Settlers in Sandusky, 1840-1852, in the book SANDUSKY THEN AND NOW. By the time of the 1860 U.S. Census, Leonard Stigel and his wife Susanna were residing in Sandusky, Ohio with their young daughter Eva. Leonard was age 35 in 1860, and his occupation was listed as “laborer.” His birthplace was given as Wuerttemberg. Susana, age 30, stated that her birthplace was Baden. By 1880, Eva was no longer listed in the census records, indicating that she may have died at a young age. Leonard’s name was listed as Leonhard Steigle in the 1880 Census. He and his wife Susana were still residing in Sandusky, with their teenaged sons Jakob/Jacob and John. Leonard Staigle died on January 2, 1896. His cause of death was listed as “old age.” Mrs. Susanna Staigle passed away on December 27, 1898. She was survived by two sons, both of Sandusky, Ohio. Leonard and Susan Staigle were both laid to rest at Oakland Cemetery. As often is the case with individuals of German descent, a wide variety of spellings of both the first and last names of Mr. and Mrs. Leonard Staigle can be found in census and vital records.
Posted by Dorene from Ohio at 1:58 AM 0 comments 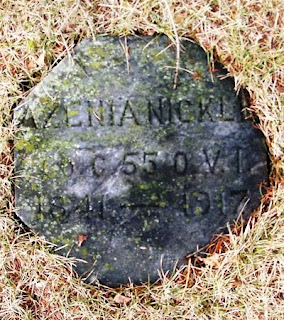 Azenia A. Nickle/Nickles served in Company C of the Ohio 55th Infantry during the Civil War. According to the Civil War Soldiers and Sailors System database, sponsored by the National Parks System, Azenia Nickles entered service as a Private, and later was promoted to Sergeant.

According to the 1880 U.S. Census, in 1880 Azenia and his wife Sarah lived in York Township of Sandusky County, Ohio, with their two children, Sarah and George, and a nephew James Cowles. Mrs. Sarah Nickle passed away in 1892. By 1917, Azenia Nickle was living with his son George in Sandusky, Ohio. Azenia A. Nickle died at the home of his son George on September 10, 1917. He was buried in Oakland Cemetery. Sadly, in February of 1917, a grandson of Azenia died as well. Emerson Azenia Nickles was named after his grandfather Azenia.

Browsing through census records and obituary indices online, the surname Nickle is also spelled: Nickel, Nickles, and Nichols. Keep in mind that you may find a variety of spellings for your ancestors when you are searching through genealogical databases, books, and government records.
Posted by Dorene from Ohio at 1:00 AM 0 comments 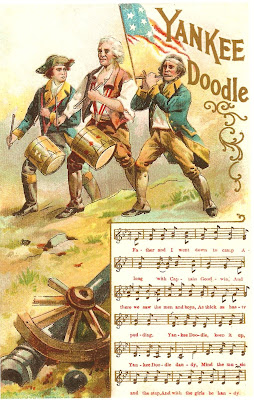 Posted by Dorene from Ohio at 1:56 AM 1 comments 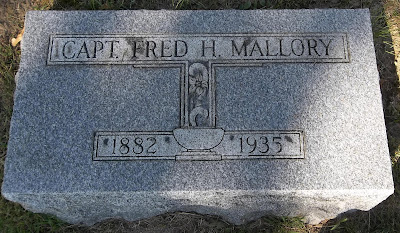 According to information on his death certificate, Frederick H. Mallory was born in Elyria on May 9, 1882 to Daniel and Abbie (Keith) Mallory. For many years Fred Mallory sailed the Great Lakes as a Captain. He was Master of the Steamer Lamont, of the Pittsburgh Transportation Line. On July 1, 1935, Fred H. Mallory died in the Cleveland Marine Hospital, after having suffered a serious foot injury earlier in the summer. Capt. Fred H. Mallory was survived by his wife, the former Ada Kalb, and a son. Capt. Fred H. Mallory was laid to rest in Sandusky's Oakland Cemetery. An obituary for Capt. Mallory appeared in the July 2, 1935 issue of the Sandusky Register.
Posted by Dorene from Ohio at 1:25 AM 0 comments