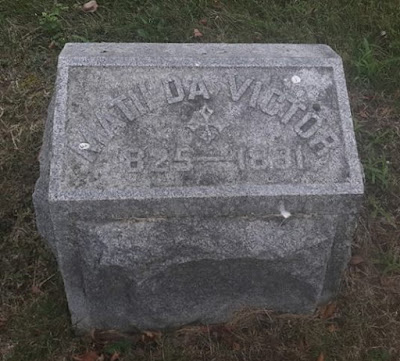 Matilda Victor, also known as Caroline Matilda Victor, was born in 1825 to Henry Clay Victor and his wife, the former Gertrude Nash. Henry C. Victor was an early tavern keeper in . By 1850, U.S. Census records show Matilda Victor residing in .  In the fall of 1870, Matilda Victor spoke in Lindsey, Ohio about women’s rights. She spoke  in 1874 at about the principles of temperance and women’s suffrage. Below is a transcription of a news article which appeared in the Southern Tier Leader on November 6, 1875.

Miss Matilda Victor of Brooklyn, lectured before the Woman's Temperance Union of Corning, at the last Sunday evening, Miss Victor was one of the original Ohio Crusaders and has the reputation of being a fine speaker and of discussing the Temperance question in a convincing manner.

Matilda Victor died in on December 16, 1891. Her remains were brought to , where she was buried in Block 5 of  Oakland Cemetery.

Posted by Dorene from Ohio at 6:02 AM 2 comments