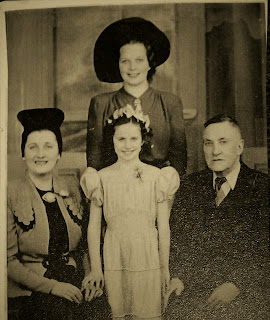 
Thomas Francis Larkins was born in 1869 to Irish immigrants Patrick Larkins and Bridget Ryan Larkins. Both Thomas and his father worked for the railroad in Sandusky, and later Thomas worked as a nickel plater, repairing bicycles and sewing machines. He sold “Ohio” bicycles at his shop as well. In 1912, Thomas F. Larkins was issued a patent for a Music Leaf Turner, was can be viewed online at Google Patents.

Thomas married Mary Louise Cross, known as Lulu or Lula,and they had three children, Edwin, who died in infancy, and Irene and Thomas Arthur Larkins. After Mary Louise (called Lou) died in 1912, Thomas married again, to a woman of German descent, Emma Leicke. Emma was beloved by the Larkins grandchildren and great grandchildren.

In his later years, Thomas F. Larkins suffered a stroke, and was cared for by his daughter Irene, at the same time his granddaughter Doris was dying of cancer. Thomas Francis Larkins died on September 11, 1944, and is buried in St. Joseph’s Catholic Cemetery in Sandusky, Ohio, near his first wife, Mary Louise Cross Larkins, a descendant of Charles Cross.. 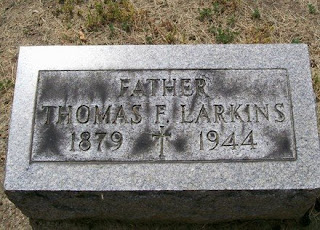 Though the tombstone for Thomas Larkins gives his birth as 1879, that was an error. His death certificate states he was born in 1869.

Below is a transcript of an article about a birthday party for Mr. Larkins when he turned thirty years old. The article was found in the March 3, 1899 issue of the Sandusky Star.

Mr. Thomas Larkins of Madison Street
entertained his friends to the number of
35 last evening, the event being his
thirtieth birthday anniversary. Music,
singing and dancing was indulged in
until a late hour. Refreshments, including
all the delicacies of the season,
were served at midnight.
Posted by Dorene from Ohio at 4:30 AM 2 comments

Where is Sandusky Bay? 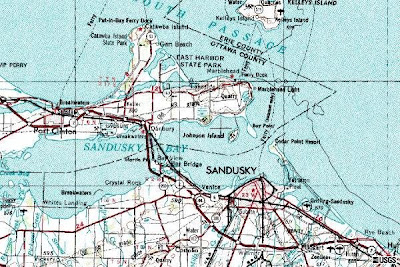 Sandusky Bay is a body of water south of Lake Erie. It is situated north of Erie County, Ohio, and south of Ottawa County, Ohio. Sandusky Bay was part of the original Firelands of the Western Reserve. Erie County has a rich heritage, going back to its early Native American residents, and many settlers from New England following the Revolutionary War.

An article by Leola M. Stewart, entitled "Sandusky, Pioneer Link Between Rail and Sail" appears on the web site of the Ohio Historical Society. Miss Stewart gives excellent historical background on the natural harbor found at Sandusky Bay, and discusses the development of transportation and natural resources found in this area of the Great Lakes.

The Graveyard Rabbit of the Sandusky Bay blog will focus on the final resting places and the stories of some of the residents of Erie County and the Sandusky Bay area.
Posted by Dorene from Ohio at 8:07 PM 0 comments

Email ThisBlogThis!Share to TwitterShare to FacebookShare to Pinterest
Labels: Firelands 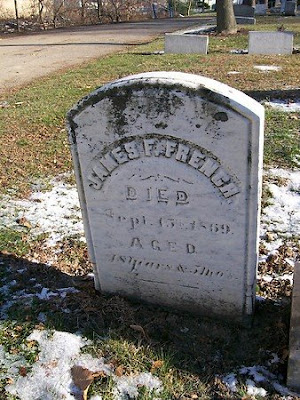 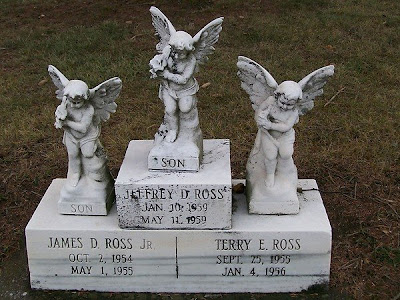 Posted by Dorene from Ohio at 4:35 AM 2 comments

Email ThisBlogThis!Share to TwitterShare to FacebookShare to Pinterest
Labels: Angel 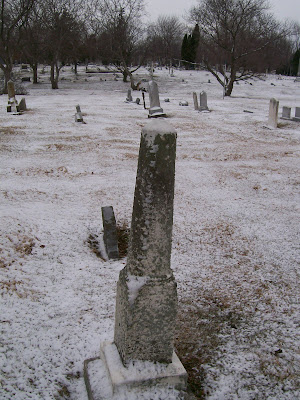 While I am not 100% sure this is the correct stone, the Oakland Cemetery interment card for Rev. Silas Sears states that his tombstone is near the roadway between blocks 82 and 73. (A previous blog post for Rev. Sears incorrectly had the location of the stone identified as between blocks 83 and 72.) The stone I believe to be the one honoring Rev. Silas Sears is the weathered vertical tombstone in the foreground of the photo.

In about 1854, Silas Sears was born into slavery in Virginia. Later he lived in Alabama, where he was ordained into the ministry, his lifelong vocation.

In the mid 1920's Rev. Silas Sears moved to Ohio, where he served as Pastor of the Norwalk A.M.E. Church.

Rev. Silas Sears died on August 20, 1956, in Sandusky's Providence Hospital. He had been a member of the North Ohio Conference of A.M.E. Church and Progress Lodge F and AM. The funeral for Rev. Sears was held at St. Stephen's A.M.E. Church, and he was buried at Oakland Cemetery. Obituaries for Rev. Silas Sears appeared in the Sandusky Register Star News on August 21, 1956 and the Elyria Chronicle Telegram on August 22, 1956. Rev. Sears was survived by his wife Addie, and a son, daughter, stepson, stepdaughter, and several other relatives. It has long been said that Rev. Silas Sears was the person for whom the Searsville neighborhood was named. Searsville is located in Perkins Township, just southwest of the intersection of West Perkins Avenue and Columbus Avenue.

The Thomas & Dorothy Jackson "Dare to Dream" Memorial Scholarship is awarded to African-American graduates of Perkins High School who have been accepted to at a four year college or university, and who have a 3.0 GPA minimum. Preference is given to residents of the Searsville or Homeville sections of Perkins Township. Contact Perkins High School for more information.
Posted by Dorene from Ohio at 9:41 AM 3 comments 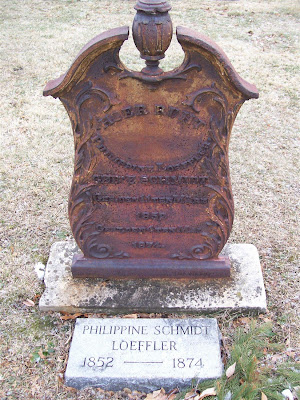 Roughly translated, the inscription on this grave marker is:

It appears that the original grave marker was metal, with the inscription in German; and later a smaller stone was placed next in front of the metal marker.


Erie County Probate Court records list a marriage record for Leopold Loeffler and Philiphena Schmidt on July 3, 1873. Mrs. Loeffler had only been married for about a year when she passed away. Mrs. Philippine/Philiphena Schmidt Loeffler is buried in Sandusky's Oakland Cemetery.
Posted by Dorene from Ohio at 8:17 AM 2 comments

Graveyard Rabbit of Sandusky Bay gets an Award


1. Copy the award to your site.
2. Link to the person from whom you received the award.
3. Nominate 7 other bloggers.
4. Link to those sites on your blog.
5. Leave a message on the blogs you nominate.

The blogs I would like to award with the KreativBlogger Award are:

1. Cheryle Hoover Davis at The Graveyard Rabbit of Northern Arizona

3. The team that writes for Jewish Graveyard Rabbit

5. Henk Van Kempen of The Graveyard Rabbit of Utrecht and Het Gooi

6. Webmaster of Blogging a Dead Horse

Visit these sites to learn more about cemeteries from all over the world, and the folks who are buried in them. Thanks again for the award, Wendy!
Posted by Dorene from Ohio at 6:16 PM 3 comments 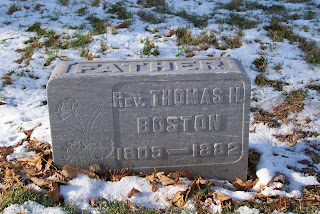 Thomas Holland Boston was born in Maryland in 1809. A biographical sketch in the 1888 “Firelands Pioneer” states that he settled in Sandusky in 1839, after his marriage to Amelia Butler. Rev. Boston established the first church for African Americans in Sandusky. For many years, he was the minister of the St. Stephen American Methodist Episcopal Church, which is still in operation on Neil Street in Sandusky.

Rush R. Sloane, author of the 1888 “Firelands Pioneer” article wrote that “Mr. Boston has always been a devoted friend of the slave and his kindly services were always at their disposal.” 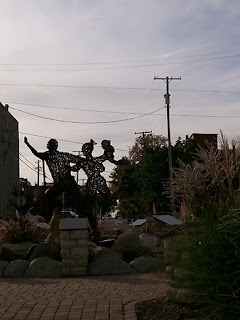 The "Path to Freedom" sculpture was dedicated at Facer Park in downtown Sandusky on November 11, 2007, honoring the community's involvement in the Underground Railroad.
Posted by Dorene from Ohio at 4:38 AM 2 comments

Below is an engraving of F. D. Parish from the July 1888 "Firelands Pioneer." 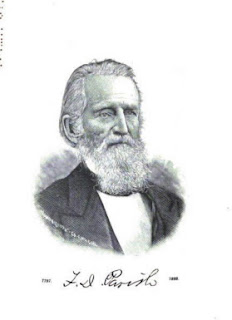 Francis Drake Parish was born in Ontario County, New York on December 20, 1796 to Elisha and Lois Wilder Parish. He moved to Ohio in 1820, and settled in Sandusky, Ohio in 1822. A publication from the Western Reserve Historical Society states that Parish was a "sound and able lawyer." Rush Sloane, another Sandusky abolitionist studied law under F. D. Parish.Mr. Parish took a deep interest in the history of the state of Ohio, and he helped to found the Firelands Historical Society. Mr. Parish had strong ties to Oberlin, Ohio. He served as acting president of Oberlin College when President James Fairchild was abroad. The Oberlin College Digital Collections features a portrait of F. D. Parish.

Two fugitive slaves from Kentucky were cared for at Parish's home and protected from arrest by their benefactor in February 1845. Parish subsequently helped the fugitives on their journey. In 1849, the Circuit Court of the U.S. for the District of Ohio fined Parish for the estimated value of the slaves at the time. This sum, together with court costs and legal expenses ($1,250) was paid by friends of Parish, who raised the necessary amount by subscriptions of one dollar each.

By the 1870's F.D. Parish had moved with his family to Oberlin. He died in 1886, and is buried with his wife and daughter in Sandusky's Oakland Cemetery. For more information about Underground Railroad activities in Sandusky, see the Sandusky History web site. 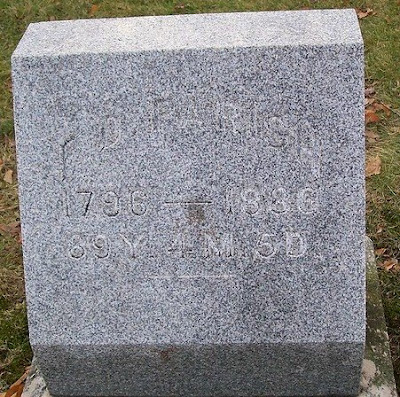 Posted by Dorene from Ohio at 4:00 AM 6 comments 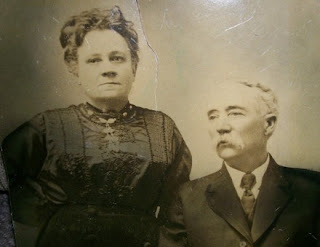 George Parker and Marian House were married about 1875 in Erie County, Ohio. Marian House was the daughter of Lindsey House and Mary Ann Young. Marian's grandfather, Julius House, settled in Perkins Township in 1815, with a group of settlers coming from Glastonbury, Connecticut.

George B. Parker was the son of Joshua Parker, who emigrated from Lincolnshire, England, in the 1850's, and Jane Francis. The only child of George and Marian (House) Parker was Leroy Joshua Parker, born May 30, 1880.

Sadly, George B. Parker died in an automobile accident on September 23, 1914,with two other men. They were returning home from a trip to the Sandusky County Fair. The accident happened near Green Creek. Young Leroy Parker was also in the auto accident.The hospital staff thought he was dead, and had covered his body with a sheet.They realized he was alive when they saw the sheet move.

Of course, Leroy Parker lived, went on to marry Ada Steen, and have four children,and a host of grandchildren, great-grandchildren, and the generations are continuing to this day.George and Marian Parker, who are buried at Perkins Cemetery in Erie County, Ohio, in the Parker family plot.
Posted by Dorene from Ohio at 4:42 AM 1 comments 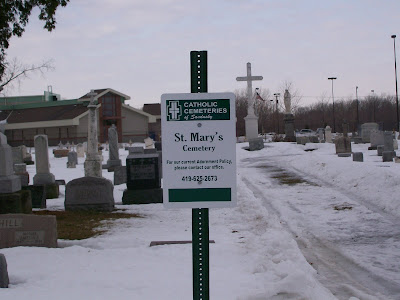 The earliest members of the parishes of Holy Angels Church and Saints Peter and Paul Church in Sandusky were usually buried at St. Joseph's Cemetery, located on the east side of Mills Street in Sandusky. Many surnames of Irish and Italian descent are found in this cemetery. 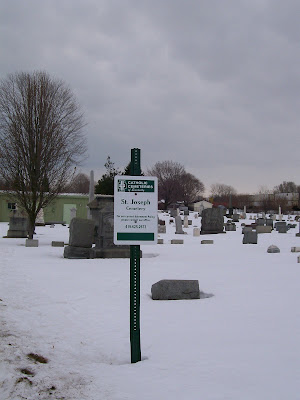 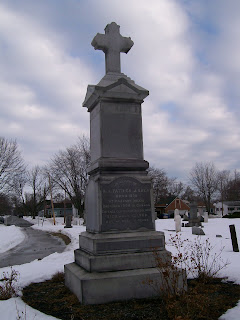 As the population of Sandusky kept growing, a new Catholic Cemetery was created in the late 1920's. Calvary Cemetery is located at the intersection of Tiffin Avenue, Sanford Street, and Venice Road in Sandusky, adjacent to the Mills Street Golf Course. 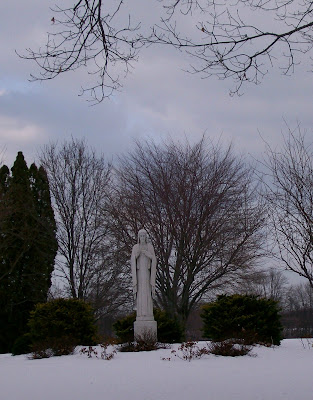 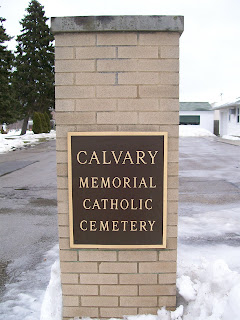 Several records for persons buried at Calvary Cemetery are available at FindaGrave. 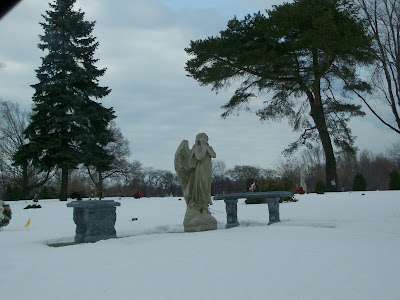 The three photographs pictured above were taken at Calvary Cemetery. On the grounds of Calvary Cemetery is the office for Catholic Cemeteries of Sandusky. During the winter months, children are often seen sledding on the hill that is located between Calvary Cemetery and Mills Creek, while in the spring and summer, golfers enjoy the Mills Creek Golf Course. The contrast between the peaceful serenity of the Catholic cemeteries, and the active participants of sporting activities causes us to reflect that both life and death are part of the natural course of human life.
Posted by Dorene from Ohio at 12:09 PM 4 comments 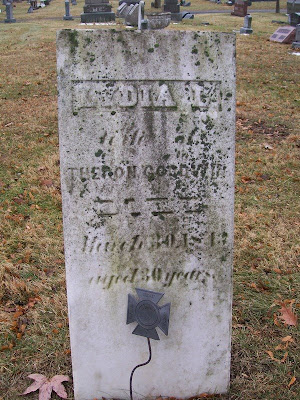 In the book THE HISTORY OF THE DESCENDANTS OF ELDER JOHN STRONG, OF NORTHAMPTON, MASS., by Benjamin W. Dwight, we read that Lydia Lyon was the daughter of Eliakim Lyon and Mary Strong Lyon. Lydia was born on December 15, 1812 at Stafford. She married Theron Goodwin in 1840 in Cuyahoga County, Ohio. Theron Goodwin was the son of Abel Goodwin and Olive Torrey Goodwin.

Lydia Lyon Goodwin's ancestry goes back to the Elder John Strong of Northampton, Massachusetts. Many other residents of Huron and Erie Counties were from this Strong line, including former Sandusky Mayor, Rush Sloane, and his grandfather Abner Strong, who was a key figure in the Undergroud Railroad of the Firelands area. Mrs. Lydia Lyon Goodwin died on March 31, 1843 in Ohio. She is buried in Oakland Cemetery in Sandusky, Ohio. The Oakland Cemetery interment card indicates that she was originally buried in Bloomingville, Ohio, but later was re-buried at Oakland.

The marker near Lydia's tombstone appears to be a Woman's Relief Corps marker. However, the Woman's Relief Corps was not organized until 1883, and Lydia Goodwin died in 1843, so it is unlikely that she was a member of this group.
Posted by Dorene from Ohio at 4:08 AM 0 comments