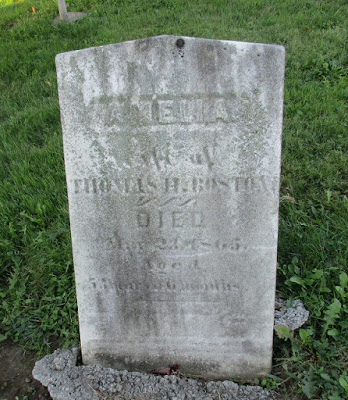 According to the 1850 U.S. Census, Amelia Boston was born about 1813 in the state of New Jersey. In May of 1839, Amelia Butler married Thomas Holland Boston in Albany, New York, and shortly after, they settled in Sandusky, Ohio. Rev. Boston was a minister in Sandusky, Ohio, and he was a friend of fugitive slaves, helping many to get to freedom in Canada, departing across the lake from Sandusky, Ohio. Mrs. Amelia Butler Boston died on May 31, 1865. She was buried in Sandusky's Oakland Cemetery.
Posted by Dorene from Ohio at 1:30 AM 0 comments 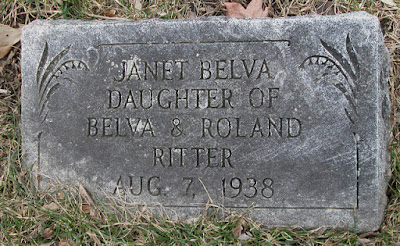 According to her death record, Janet Ritter was the daughter of Dr. Roland Ritter and his wife, the former Belva Dilley. Janet died as an infant, on August 7, 1938, and she was buried at Sandusky's Oakland Cemetery. Janet Ritter was the descendant of longtime Sandusky cigar store owner, Henry Ritter.
Posted by Dorene from Ohio at 1:30 AM 0 comments