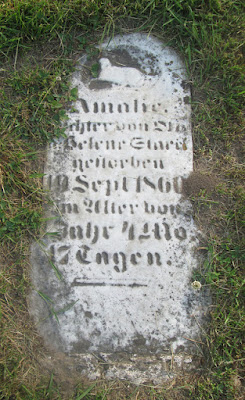 This flat tombstone in Block 16 of Sandusky's Oakland Cemetery honors the memory of a child named Amalie. Though very weathered, it looks like a lamb adorns the top portion of her grave marker. Amalie died in September of 1860.  So far I have not been able to determine who her parents were, but most likely they were of German descent, since there are words written in the German language on her tombstone. Rest in peace Amalie!
Posted by Dorene from Ohio at 1:30 AM 0 comments 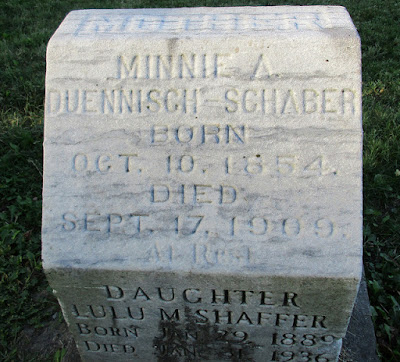 Both mother and daughter are remembered on this tombstone at Oakland Cemetery in Sandusky, Ohio. Minnie A. Duennisch Schaber was born Minnie Brehm, on October 10, 1854. Her parents were William and Elizabeth Brehm. Her sister was Marie Brehm, once a candidate for Vice President of the U.S. on the Prohibition Party ticket. Minnie first married Louis H. Duennisch, in Erie County, Ohio on October 24, 1878. Mr. Duennisch died in 1889, while he was still in his early thirties. Minnie then married Charles F. Schaber, on September 20, 1892. Mrs. Minnie Duennisch Schaber passed away on September 17, 1909, following a lengthy illness.

Lulu Duennisch  (sometimes spelled Denisch) was the youngest child of Minnie and Louis Duennisch, born on January 29, 1889. Lulu was a young infant when her father passed away. Miss Lulu Duennisch married Homer Schaffer. Mrs. Lulu Shaffer died at the age of 47 in Knox County, Ohio, and she was buried in the family lot at Oakland Cemetery.
Posted by Dorene from Ohio at 1:30 AM 0 comments 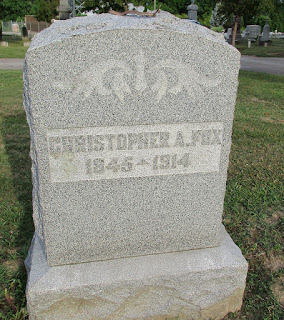 Christopher A. Fox was born in Perkins Township of Erie County, Ohio in 1845 to Alvin Fox and his wife, the former Fanny Johnson. Christopher never married, and he lived all his life on the Fox family farm in Perkins Township. Sadly, he died in a fire  at his home on September 11, 1914. Christopher A. Fox was buried in the Perkins Cemetery. You can read more about the Fox family in biographical sketch about William N. Fox found in Hewson Peeke's A STANDARD HISTORY OF ERIE COUNTY, OHIO. 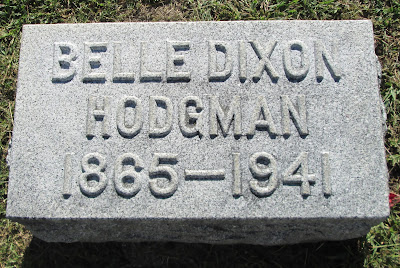 According to her death record, Belle Dixon Hodgman was born in Hudson, Michigan, on January 20, 1863, to John and Sarah (Hamley) Dixon. She was the first principal of Campbell School in Sandusky, Ohio. In the summer of 1886, Belle Dixon married G.B. Hodgman, who operated a cooperage in Sandusky for several years. Mrs. Belle Dixon Hodgman died on January 26, 1941, in St. Louis, Missouri. Her remains were brought back to Sandusky, Ohio for burial at Oakland Cemetery. An obituary for Belle Dixon Hodgman appeared in the September 20, 1941 issue of the Sandusky Register Star News. Mrs. Hodgman's death record is on file at the Missouri Digital Heritage website. 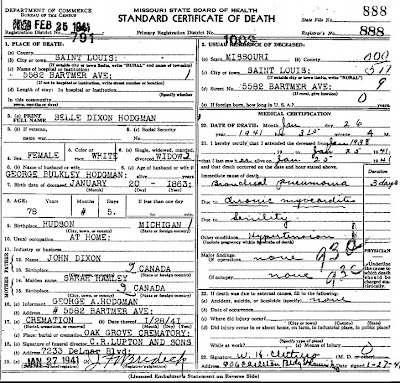