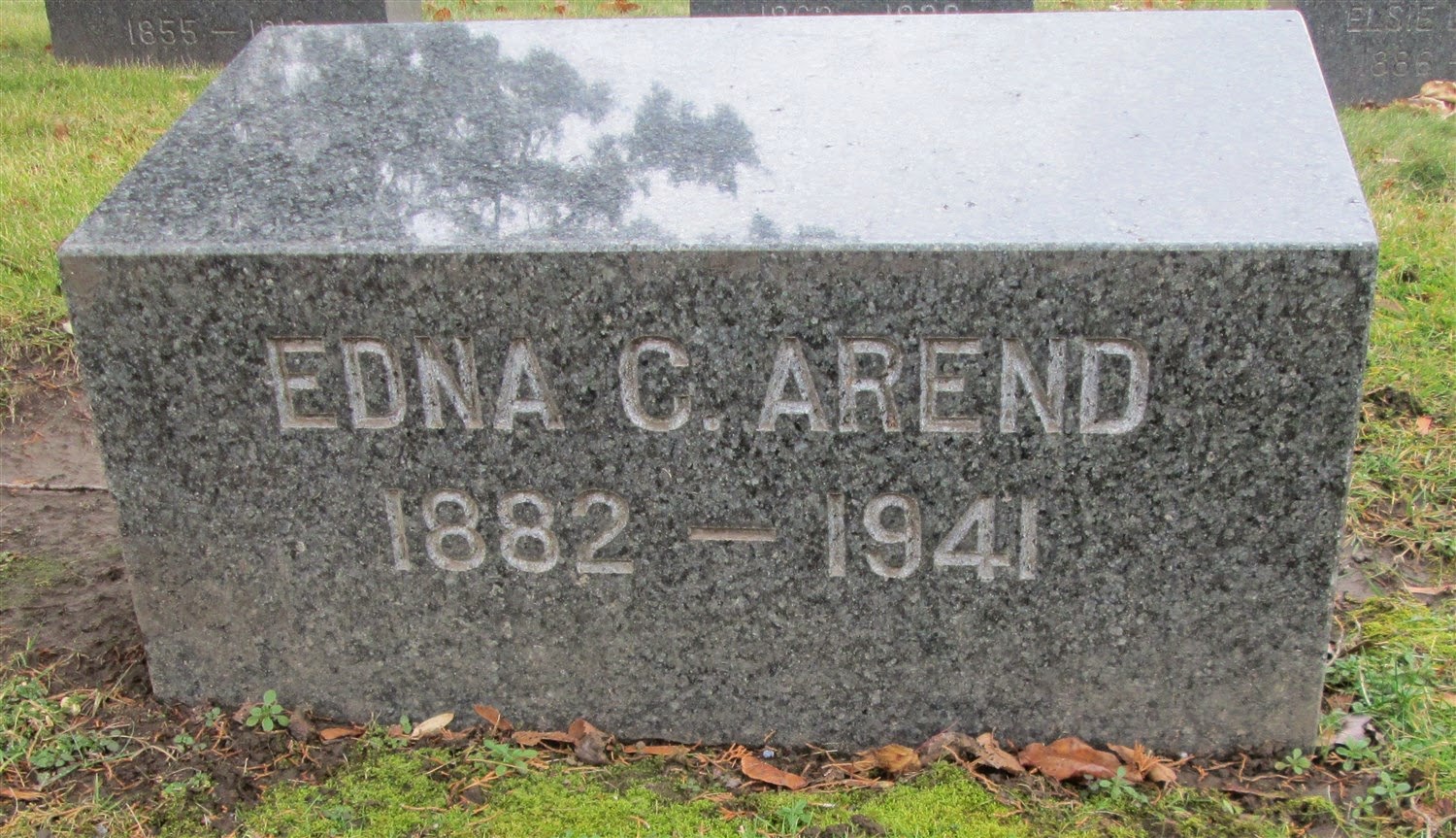 According to her death record, Edna C. Arend was born Edna C. Schmidt, on May 14, 1882.  Her parents were August and Ida (Rehberg) Schmidt, both originally from Middle Bass Island. In February of 1905, Edna C. Schmidt married Nelson Arend in Erie County, Ohio. 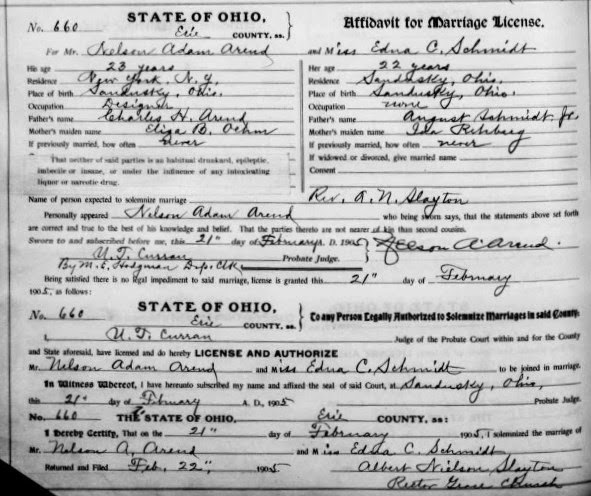 Mr. and Mrs. Arend moved to Cleveland in 1913, where Edna was active with the Associated Charities and the Cleveland Women's City Club. On December 31, 1941, Edna C. Arend died after a lengthy illness. She was survived by her husband, two daughters, a grandson, and a sister. Funeral services for Edna Arend were held at the residence of Mr. and Mrs. William Sprow, with Dr. Donald Wonders officiating. Burial was at Oakland Cemetery.
Posted by Dorene from Ohio at 1:30 AM 0 comments

Family History at our Christmas Get Together 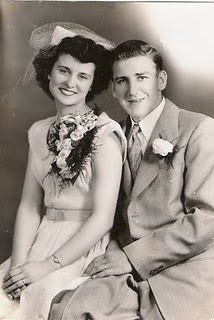 The large Christmas family gathering, which includes the children, grandchildren, and great grandchildren of Paul and Joyce Orshoski, (at least as many of them that are able to attend) is always fun! Mom and Dad are pictured above in a wedding photo from 1951. Later they would have six children and twenty grandchildren, and many great grandchildren. On Christmas Day we got to see how big the nieces and nephews are getting, exchange gifts, and enjoy lots of delicious food. This past Christmas Day we heard about a nephew and future niece-in-law's upcoming wedding. Also a niece and her hubby announced that they are expecting a little one in the summer. Recently another niece and nephew and their spouses announced a new baby in their family line as well! As one who loves family history, I see that soon there will be new branches and limbs on the family tree. My sister Kellie got a "selfie stick" and she had a good time testing it out on the family! Below are just some of the children, grandchildren, and great grandchildren of Paul and Joyce Orshoski. Though are no longer with us, the things they taught us, and traditions they began, continue to stay with us all to this day. 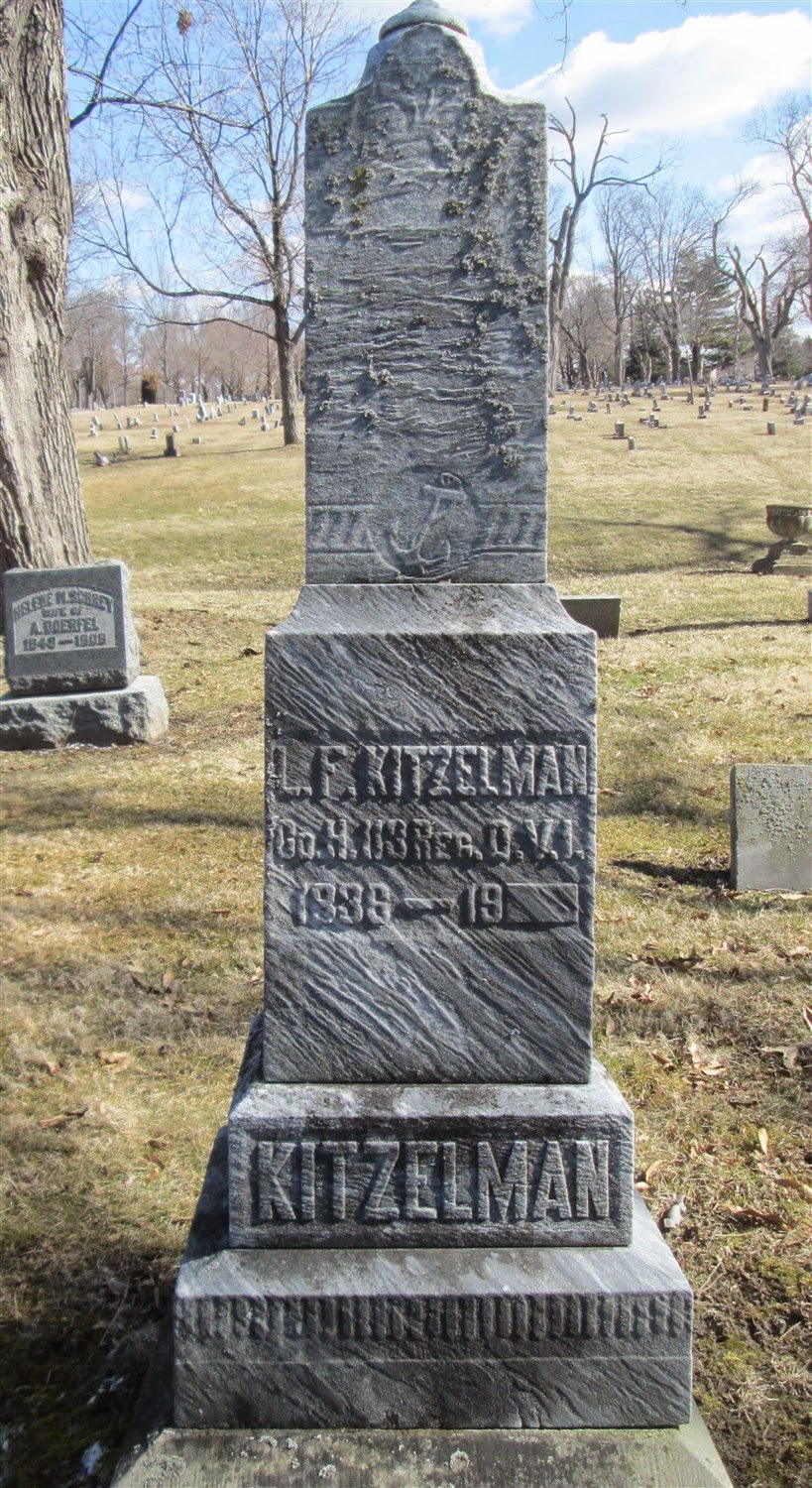 L.F. Kitzelman served in Company H of the 113th Ohio Volunteer Infantry during the Civil War. Though he did not reside in Sandusky at the time of his death, he had friends and relatives from the Sandusky area. After Mr. Kitzelman's death on December 27, 1907, his remains were brought to Sandusky for burial at Oakland Cemetery. Brief obituaries for L.K. Kitzelman appeared in the December 29 and December 30 issues of the Sandusky Register in 1907. 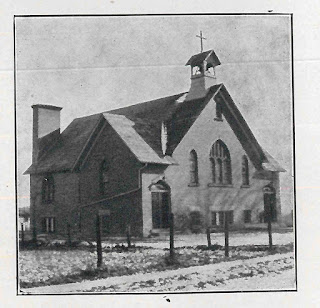 In an article which appeared in the December 22, 1939 issue of the Sandusky Register, I learned that on Christmas Eve in December of 1939, my dad, Paul Orshoski, and his siblings and cousins were all participants in the Trinity Lutheran Church’s Children’s Christmas Service. In the pageant “On to Bethlehem,” Paul Orshoski, his brother Wayne Orshoski,  his sister Alberta Orshoski and his cousin Frank Orshoski were all characters in the pageant. 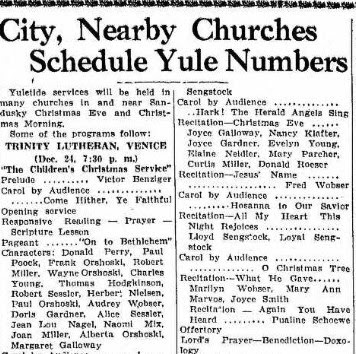 Dad’s brother Don Orshoski and cousin Rolland Orshoski were part of the group of angelic hosts who gave a recitation.

It is hard for me to imagine any child from the Orshoski family portraying an angel in the church pageant! In the family stories I have heard, they were all quite mischievous! The Trinity Lutheran Church, on Bardshar Road is located on Sandusky’s west side, in a region that was once known as Venice, Ohio. Trinity Lutheran Church  was an outgrowth of the Zion Lutheran Church in Sandusky.A few years before this 1939 Christmas pageant, this picture of my dad and his siblings was taken at their home in Bay Bridge. 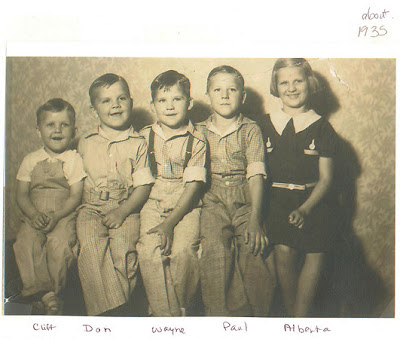 In the 1940s, several of the youngsters who had been  in the Christmas  pageant at Trinity were confirmed. 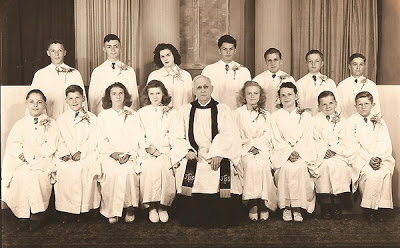 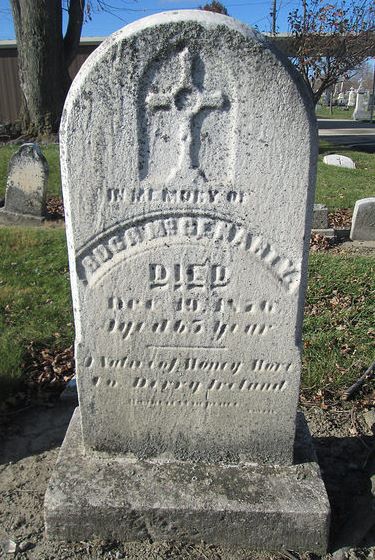 This lovely stone which has a cross at the top, honors the memory of Hugh McGenanty, who was also known as Hugh McGinty. Hugh died on December 19, 1876, at the age of 65. He was buried at the St. Joseph Cemetery in Sandusky, Ohio, near several other members of the McGinty family. An inscription at the bottom of this tombstone indicates that has was a native of Moneymore, in County Derry, Ireland.
Posted by Dorene from Ohio at 1:30 AM 0 comments

Toyland Advertisement from December of 1915 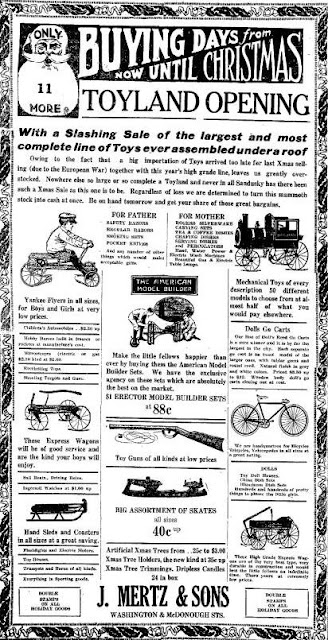 Instead of electronics, the children of Sandusky, Ohio in 1915 were looking forward to sleds, bicycles, and skates under the Christmas tree. This ad appeared in the December 15, 1915 issue of the Sandusky Register. All these items were sold by the J. Mertz & Sons store at Washington and McDonough Streets in Sandusky, Ohio.

Erecto Model Builder sets sold for 88 cents! Skates were priced 40 cents and up.
Posted by Dorene from Ohio at 1:30 AM 0 comments

Today I had the pleasure of chatting with some descendants of the second wife of my Great Great Grandfather, Lawrence Yeager/Lorenz Jaeger. After Great Great Grandpa's first wife, Maria Schweighardt, passed away, he married the widow of John Christian Dannenmann, whose maiden name was Catherine Geigel. By searching FamilySearch.org for the marriage record of Lorenz Jaeger and a bride named Catherine, this record was retrieved. The couple was married in Erie County, Ohio on February 25, 1892. The second Mrs. Yeager passed away on March 15, 1911. She was buried at Sandusky's Oakland Cemetery, where her first husband was also buried. Here is information about the Yeager/Jaeger family, as it appeared in the 1900 U.S. Census. Theirs was a blended family. I am sure that Mrs. Catherine Yeager got to know my great grandfather, Andrew Yeager, and his siblings. In the census listing as it appears at FamilySearch.org, the surnames were spelled Jueger and Dunneman. Always keep in mind that in surnames of German descent, many spelling variations may be found!

Posted by Dorene from Ohio at 1:36 PM 0 comments 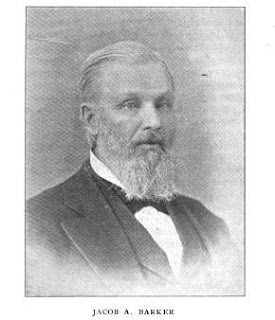 According to the Firelands Pioneer, Jacob A. Barker was born in Buffalo, New York on December 9, 1818. His father was Zenas W. Barker, who served in the War of 1812. His grandfather, also named Zenas Barker, served in the American Revolution. In 1834, Jacob A. Barker moved to Sandusky, Ohio with his family. He married Mary Elizabeth Patterson on November 22, 1847. Jacob and Mary were the parents of four sons. Jacob Barker was the general freight agent for the Mad River and Lake Erie Railroad. Later he was the Sandusky agent of the United States Express Company. Jacob A. Barker died on December 22, 1898, and he was buried in the family lot at Sandusky's Oakland Cemetery. 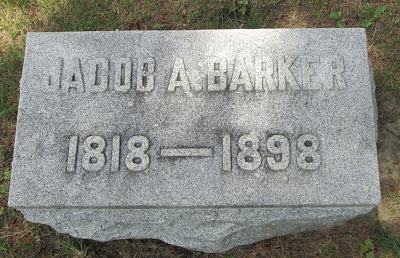 Barker Street and Barker School in Sandusky were named for the ancestors of Jacob A. Barker.
Posted by Dorene from Ohio at 1:30 AM 0 comments 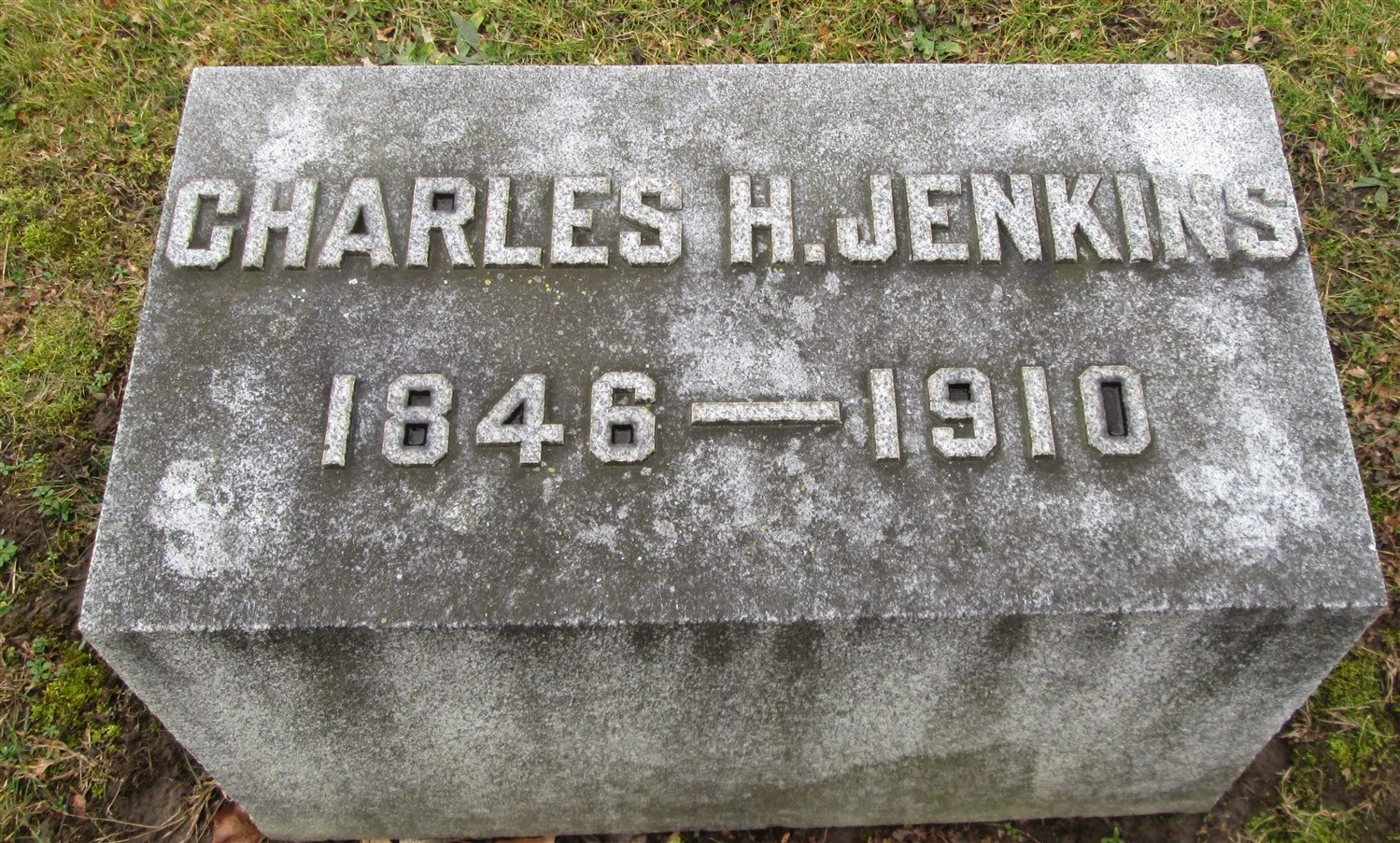 Charles H. Jenkins was on June 5, 1846 in Jefferson County, to George K. Jenkins and his wife, the former Sarah Updergraff, both devout followers of the Quaker religion. For many years, Charles H. Jenkins was a cashier at a bank in Oberlin, Ohio, where his brother in law served as  bank president. In 1875, Charles Jenkins married Alice Johnson, the daughter of Leonard B. Johnson.  Alice Johnson Jenkins passed away in 1881 at the age of 31. Mr. Jenkins took as his second wife Miss Kate Ross of Zanesville. They had a son named Kenneth. Charles H. Jenkins died on December 3, 1910, after a lengthy illness. An obituary which appeared in the December 4, 1910 issue of the Sandusky Register read in part:

Mr. Jenkins had been in failing health for more a year or more and was stricken with paralysis on the night of November 22, from which he did not rally but slightly and later gradually failed until the end, came peacefully.His death removes a citizen whom was not only personally highly esteemed, but who for a period of about thirty-eight years has been identified with Sandusky's business interests.

Funeral services for Charles H. Jenkins were held at the family residence, and burial was in Oakland Cemetery in Sandusky, Ohio.
Posted by Dorene from Ohio at 1:30 AM 0 comments 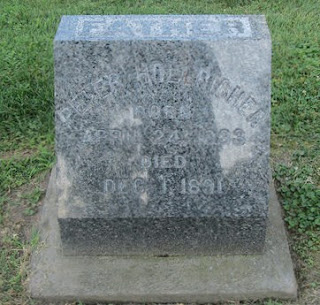 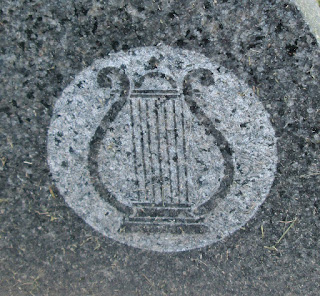 On the other side of Peter's tombstone is the Odd Fellows triple chain symbol, which represents friendship, love and truth. 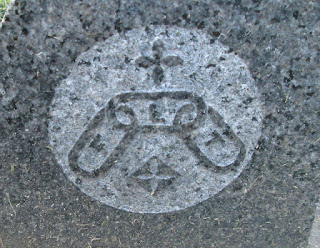 Though Mr. Hollricher passed away well over a hundred years ago, we can learn about him from simply looking at this tombstone.
Posted by Dorene from Ohio at 1:30 AM 0 comments