Jessie Lea and Lea Brittingham, Cousins Who Both Died Young 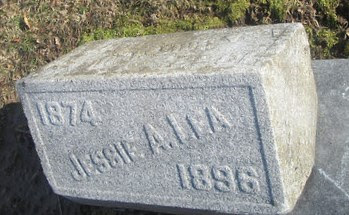 In Block 20 of Oakland Cemetery in Sandusky, Ohio, is a tombstone which honors the memory of two young people who died quite young. They were first cousins, their mothers having been sisters. Jessie Lea died at the age of 21, of rheumatism, in June of 1896. She was the daughter of  local jeweler Lewis M. Lea, and his wife, the former Hattie Cady. 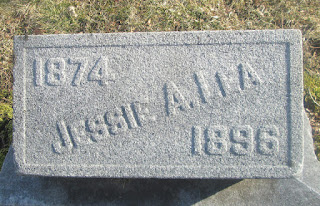 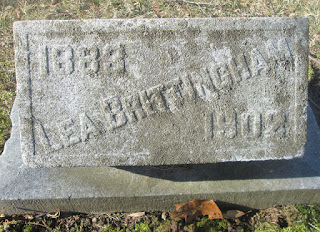 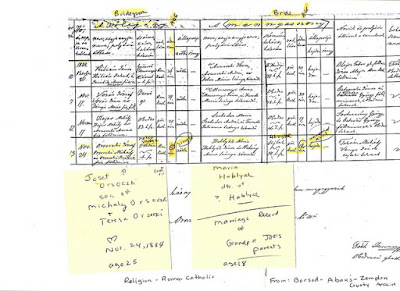 Several years ago, I obtained the marriage record of the parents of my great grandfather, Joseph Orshoski. His parents were:

Josef was age 25, and Maria was age 18 at the time of their marriage on November 24, 1884. Their religion was listed as Roman Catholic. The marriage took place in Felsővadász, a village in Borsod-Abaúj-Zemplén County, Hungary.

Josef Orsoczky, the father, actually came with his son Josef/Joseph to the U.S. in the very early 20th century. Family lore says that the elder Josef did not like America, and he returned to his homeland of Hungary. How I would love to know what Josef and Maria Orsoczky looked like!!

Thank you Archives of Borsod-Abauj-Zemplen County for this important vital record! 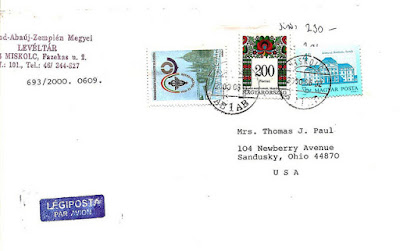 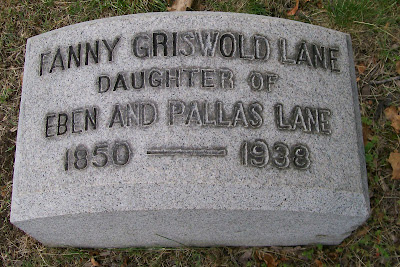 Fanny moved with her family to Chicago. The 1880 U.S. Census, available at FamilySearch, listed the Ebenezer Lane family as residing in Chicago, Illinois. Fanny was 29, and her father listed his occupation as retired physician. Fanny's brother, also named Ebenezer, was 32, and her sister Mary was 25. The ages of Fanny's parents, Ebenezer and Pallas were 60 and 55, respectively. After the death of Dr. Ebenezer Lane, Fanny and her brother, the third Ebenezer Lane, donated the Lane book collection to the University of Chicago. The Lane book collection had been started by Judge Ebenezer Lane, and was passed down to Dr. Ebenezer Shaw Lane.

You can read more about the Lane family history in the three volume book entitled LANE GENEALOGIES, by Jacob Chapman and James Hill Fitch, published between 1891 and 1902 by the Newsletter Press in Exeter, New Hampshire. Volume 2, which contains details about Judge Ebenezer Lane and his descendants, is accessible at the Internet Archive. Miss Fanny Griswold Lane passed away in Chicago on November 23, 1938, and she was buried at Sandusky's Oakland Cemetery.
Posted by Dorene from Ohio at 1:19 AM 0 comments 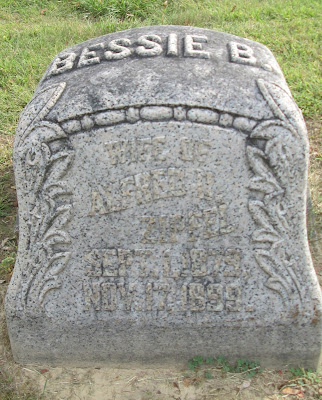 Mrs. Bessie B. Zipfel, the wife of Alfred Zipfel, died on November 17, 1899, only six weeks after she married Alfred Daniel Zipfel. Bessie was a victim of typhoid fever. Below is the marriage record of Bessie Jackson and Alfred Zipfel, from Erie County Probate Court records, scanned at FamilySearch.org. 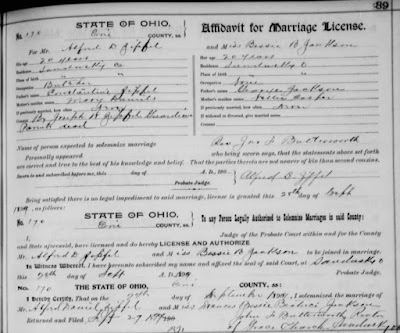 The Sandusky Star carried this obituary of Mrs. Bessie Zipfel in its November 18, 1899 issue. 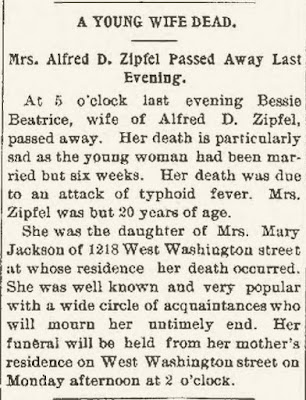 Bessie was laid to rest at Oakland Cemetery. May she rest in peace. 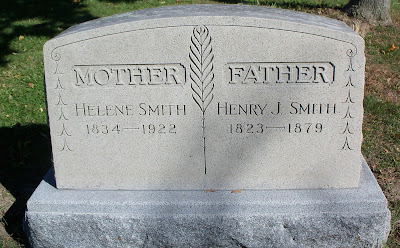 The lovely tombstone honoring the memory of Henry J. and Helene Smith is found at Sandusky's Oakland Cemetery.  According to the 1870 U.S. Census, both Henry and Helene were natives of Hesse, Germany. At that time, Henry, age 46,  and Helene, age 35,  lived in Sandusky, Ohio, where Henry worked as a drayman. Also residing at the Smith household were: John, age 19; George, age 15; Fred, age 10; A., age 7; and Mary, age 4. By 1880, Henry J. Smith had died, and Helene Smith was a widow. Her name was listed as Halana Schmidt in the 1880 Census. In 1880, it appears that John had moved out, and the children still at home were: George, Fred, Adam, and Mary. In 1900, Helene Smith was living with her daughter, who was now married, Mary Smith Schlup. Census records in 1910 show Helene residing with her son Adam Smith; and by 1920, Helene was living with her son George Smith. On May 23, 1922, Mrs. Helene Smith passed away as a result of apoplexy.  The son of Henry and Helene Smith, Fred H. Smith, owned a marble works business in Norwalk, Ohio for many years. 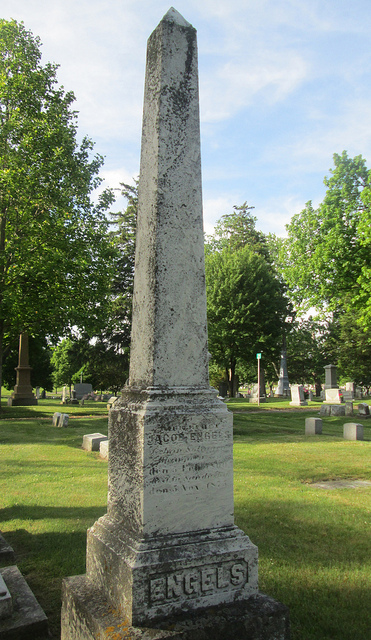 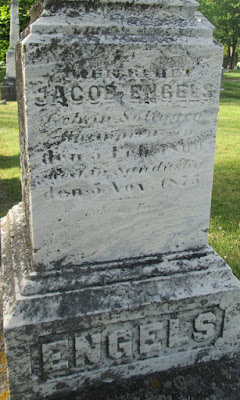 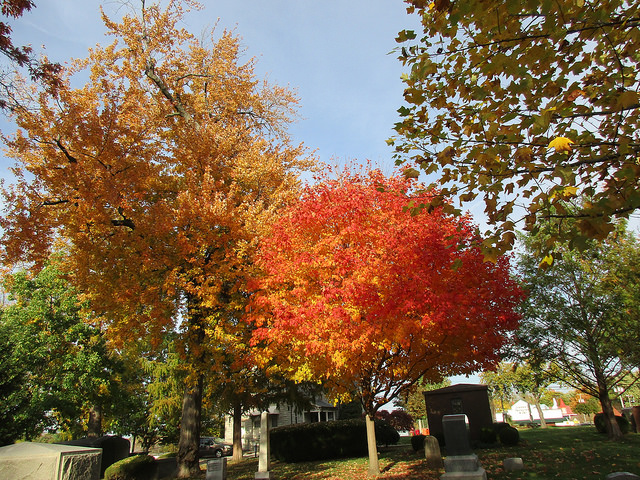 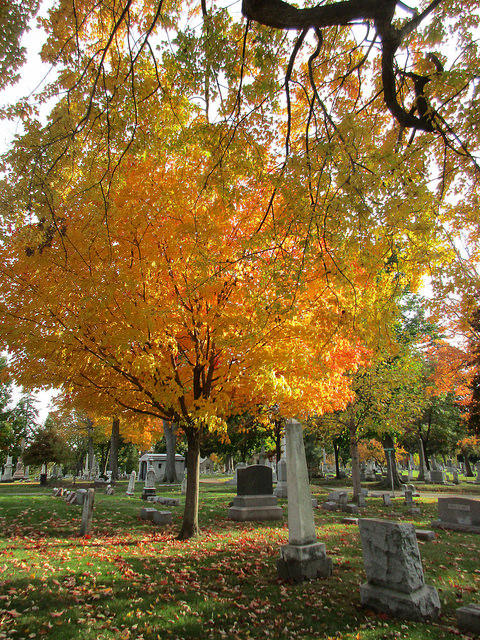 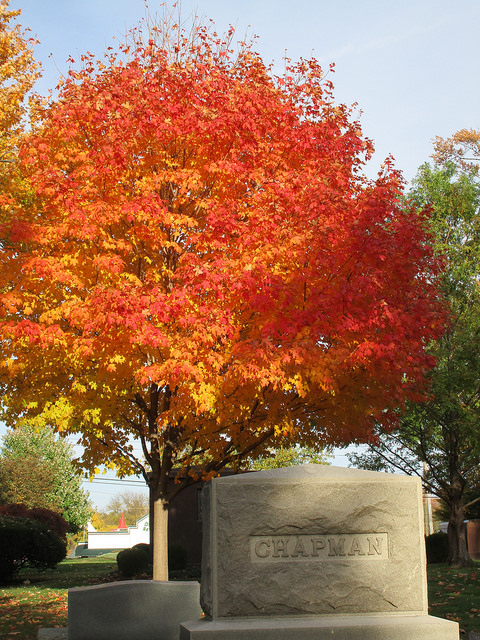 Posted by Dorene from Ohio at 1:20 PM 1 comments 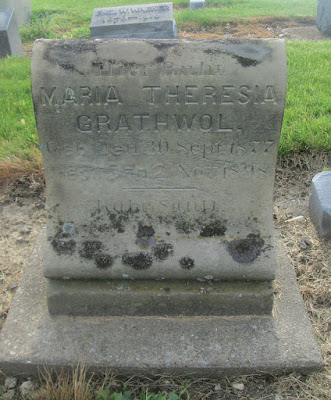 According to her baptism record, Maria Theresia Grathwol was born in Bremgarten, Freiburg, Baden on May 14, 1871 to Ulrich Grathwol and Gertrud Schaeuble. (Her tombstone birth year reads 1877.) She was of the Catholic faith. By 1898, the Grathwol family had emigrated to the U.S., and were residing in Sandusky, Ohio. Sadly, Maria Theresia Grathwol died from peritonitis on November 2, 1898. She was buried in the family lot at the St. Mary's Cemetery. Maria's death record was recorded in the St. Mary's Catholic Church Records, available at the Toledo Diocese collection of records at FamilySearch.org.

An inscription at the base of Maria's tombstone reads Ruhe sanft, which translates from the German language to the English language as "Rest gently."