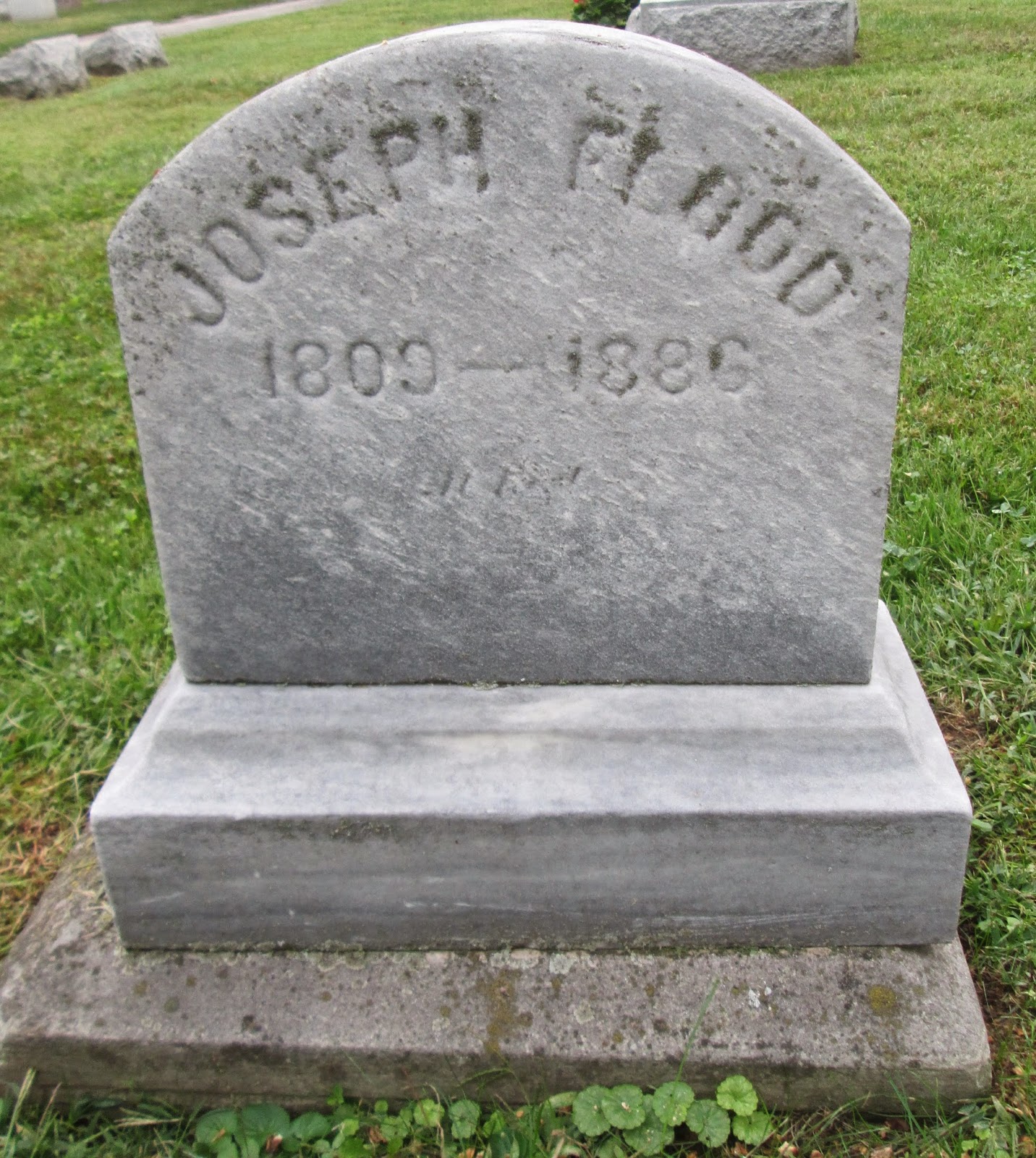 According to the 1850 U.S. Census for Erie County, Joseph Flood was born in 1809 or 1810 in Pennsylvania. In 1850, he and his wife were residing in Portland Township (now known as Sandusky), where Joseph was employed as a tinner. Records at FamilySearch indicate that on April 22, 1849, Joseph Flood married Sarah Crippen. The 1860 Census shows these children in the Flood household:

Joseph Flood, the father.  passed away on June 28, 1886. A brief obituary for Mr. Flood, from the June 29, 1886 issue of the Sandusky Register, stated that his funeral was held at the family home at 214 Huron Avenue in Sandusky. Joseph Flood was buried at Oakland Cemetery. An inscription on his tombstone reads: 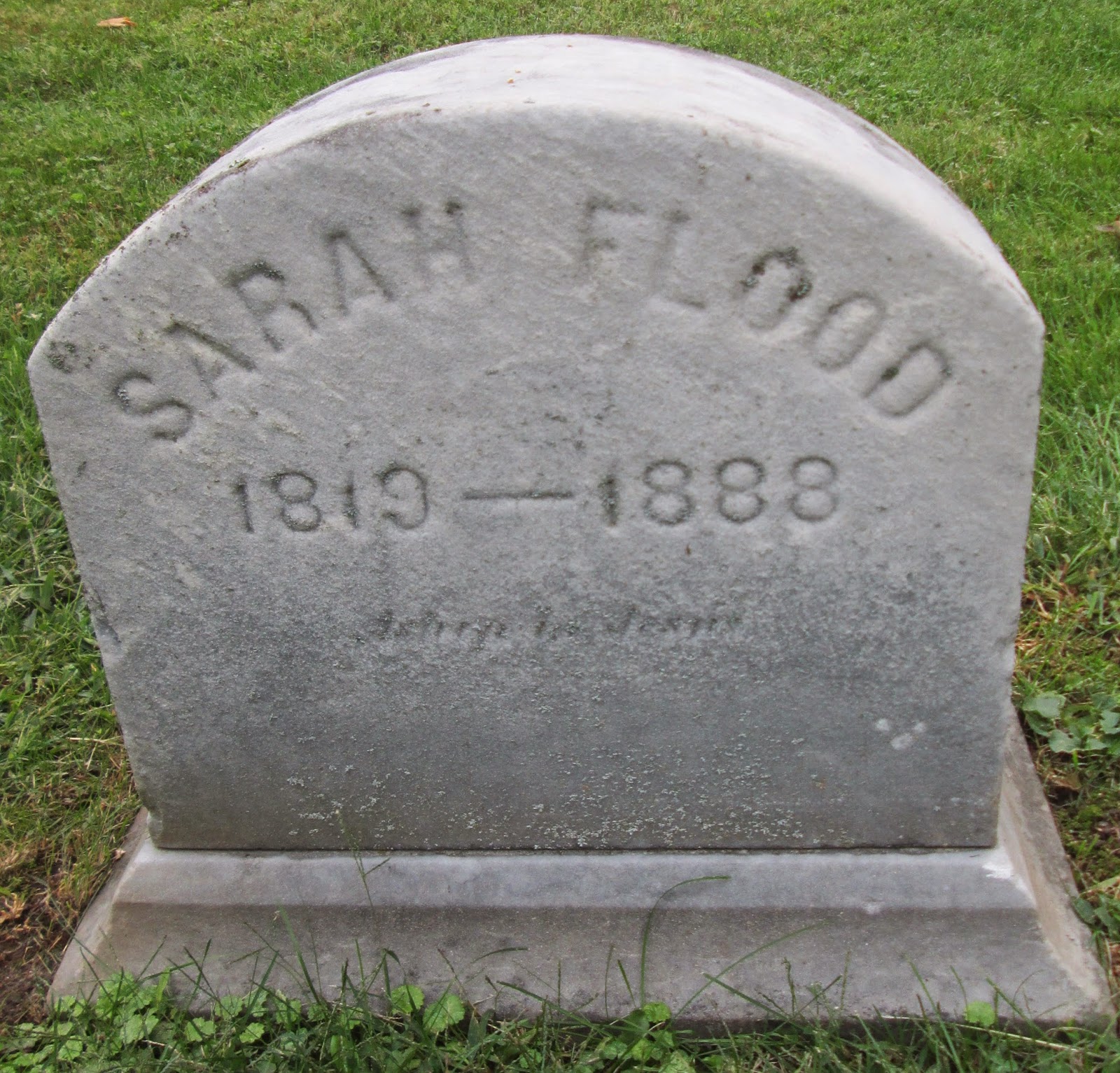 Rest in peace, Joseph and Sarah Flood.
Posted by Dorene from Ohio at 1:30 AM 0 comments 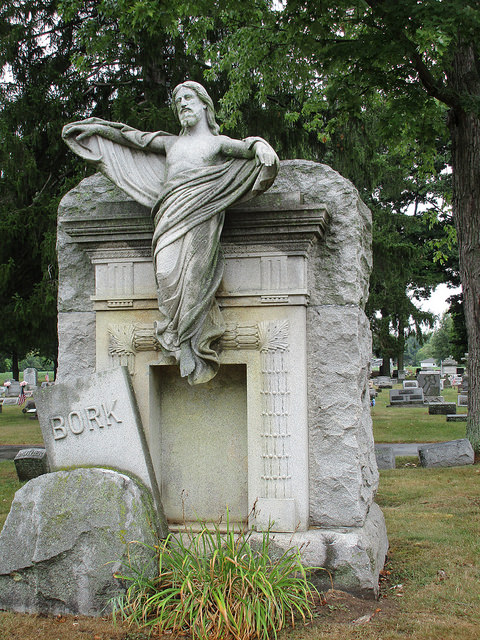 This lovely monument at the St. Joseph Catholic Cemetery in Tiffin, Ohio, honors the memory of the extended Bork family of Seneca County, Ohio. To me it represents Christ rising from the dead, and the stone having been moved away from the tomb, and suggests that those members of the Bork family who have passed from this life, have eternal life with the Lord in Heaven. One member of the family was Minrad Bork. He was born in 1855, and died on June 26, 1937. 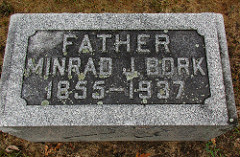 Minrad Bork is a representative of an honored pioneer family of Seneca county, and throughout his entire life he has resided within the borders of this county, his birth having occurred in Bloom township on the 3d of. October, 1856. He is a son of Frederick and Margaret (Young) Bork. The former was born in Germany and was a son of Philip Bork, with whom he came to the United States, taking passage on a sailing vessel which reached the harbor of Baltimore after forty days The family at once continued their westward journey, and on arriving in Seneca county made a location in Bloom township. Here the grandfather was connected with the development of a tract of wild land and. with agricultural pursuits until his death, which was occasioned by an accident on the railroad. The first possession of the Bork family in this county was a tract of one hundred and sixty acres of wild land which they secured from the government, and their pioneer home was a little log. cabin built in the usual pioneer style save that it contained two rooms-instead of the usual number—one. With the work of clearing and developing this farm Frederick was actively associated, and throughout the years of his residence here he carried on agricultural pursuits. Here he reared his family of ten children, as follows : Philip, a farmer of Seneca township; Eva; Frank, a farmer of Eden township; Magdaline, the wife of G. Fred Buchman; Mary, who has passed away; Lewis, a resident of Benton county, Indiana; John P., who is living in Eden township; Minrad, the subject of this review ; and Philomenia and Elizabeth, both living in Tiffin.The subject of this review was only four years of age when his father removed to the farm upon which he now makes his home. Here he was reared to manhood and early became familiar with the work of the farm in all its departments, laboring in the fields and meadows. He also attended the district schools, pursuing his studies through the winter months when the work of the farm was practically over for the year.. He assisted his father throughout the period of his minority and when thirty years of age he took charge of the old homestead and has since devoted his energies to its cultivation. In 1884 he purchased this property and he now owns two hundred and forty-two acres, all in one tract. in Seneca township. His fields are well tilled and surround good farm buildings. In his pasture lands are seen high grades of stock, and all modern equipment and accessories are found upon his place. He makes a specialty of raising Durham cattle and has some fine specimens of that breed. One hundred and fifty-five acres of his land is under cultivation and annually he harvests rich crops. On the 4th of March,1885, was celebrated the marriage of Mr.  Bork and Miss Annie Reinhart, by whom he has three children, Edward, Clara and Joseph. The parents are well known in the community, having always resided in Seneca county, and the hospitality of many of the best homes of the locality is extended freely to them. In his political affiliations Mr. Bork is a Democrat, and while he always casts his ballot for the men and measures of the party and loyally advocates its interests, he has never sought or desired public office. His religious faith is that of the Catholic church. 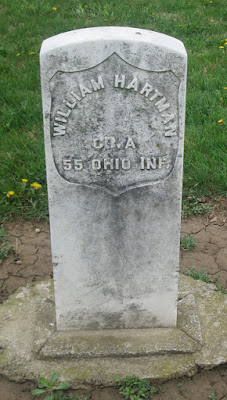 According to records at the Hayes Presidential Library and Museums, William Hartman enlisted in Company A of the Ohio 55th Infantry on September 28, 1861, at the age of 18. Later he served in the Veteran Reserve Corps. Sadly, William Hartman died on June 23, 1865. He was buried in the Reformed Church Cemetery in Bellevue, Ohio, now known as  the St. Paul United Church of Christ Cemetery, at the corner of Kilbourne and Gardner in Bellevue, Ohio.
Posted by Dorene from Ohio at 1:30 AM 0 comments 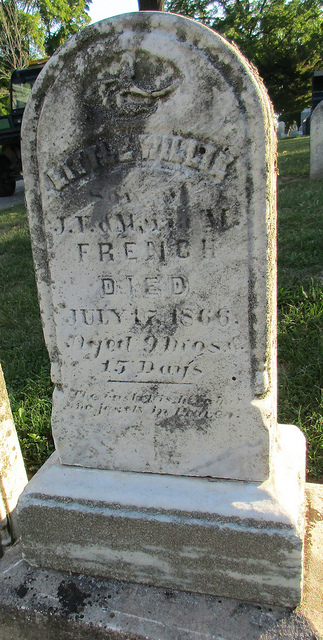 "Little Willie" was the son of James and Maria M. French. He died on July l7, 1866 at the age of 9 months and 15 days. There is an inscription at the base of the tombstone of Willie French. While I was unable to decipher the first line, the second line of the inscription reads: "the jewels in Heaven." This may be an allusion to the poem entitled "An Infant's Epitaph," by Rev. S.F. Smith which concludes with:

And the lost ones of earth be thy jewels in heaven.

Willie French would have been a brother to the prominent Sandusky businessman, James M. French, who left a generous gift to Oberlin College in his estate.
Posted by Dorene from Ohio at 1:30 AM 0 comments 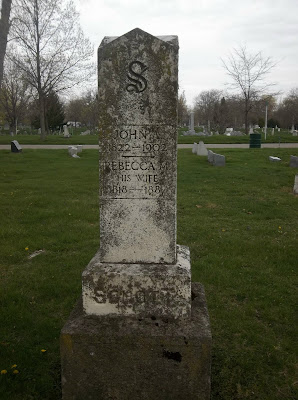 John Andrew Schott was born Winsheim, Bavaria, Germany in 1822. He was a pioneer resident of Sandusky, Ohio. Records at the Erie County Probate Court show that John Andreas Schott was married to Rebecca Muller in Erie County on July 11, 1855 by Rev. Frank Seidel, minister of the Evangelical Lutheran Church. In the 1860 U.S. Census, John Andrew Schott listed his occupation as baker. He was age 38 and stated that his birthplace was Bavaria. John's wife Rebecca was age 41, and her birthplace was Oldenburg. Their children were: Mary, age 3; Anna, age 2; and Babetta, age 1; all born in Ohio. Youngest daughter Babetta must have died very young, as her name does not appear in any future census records. Rebecca Schott passed away in 1887. John Andrew Schott died on November 20, 1902. Mr. Schott was survived by daughters, Mrs. John Kenne and Mrs. John Lester. Funeral services for John A. Schott were held at the Schott home at 430 Pearl Street. Burial was at Oakland Cemetery.
Posted by Dorene from Ohio at 1:30 AM 0 comments 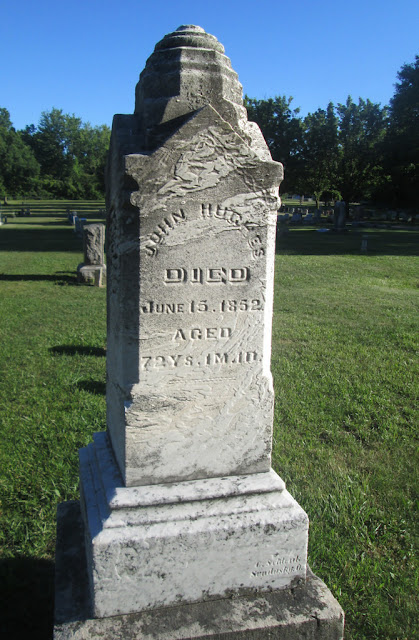 John Hughes was born in 1780. By the time of the 1850 U.S. Census, John Hughes was living in Huron, Erie County, Ohio with his wife Margaret and their children. John was employed as a farmer. John Hughes died on June 15, 1852, at the age of 72 years, 1 month, and 4 days. He was buried at the Perkins Cemetery. The tombstone of John Hughes was made by C. Schlenk of Sandusky.

Barney Monument on the North Ridge of Oakland Cemetery 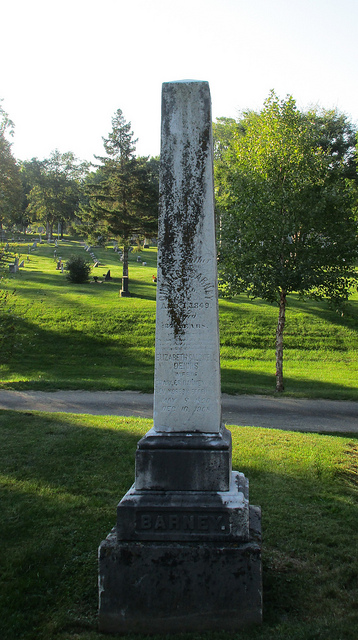 Besides an individual stone honoring the memory of Charles Barney, there is also a tall monument in the North Ridge section of Oakland Cemetery which remembers the life of Charles Barney and his wife, the former Elizabeth Caldwell Dennis.  Charles Barney was born in the state of New York in 1812, and he died on August 1, 1849 during Sandusky's cholera epidemic. An inscription on the Barney tombstone features a passage from Psalm 24: 5. 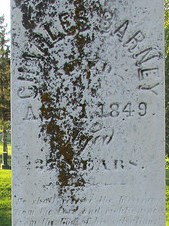 He shall receive the blessing from the Lord and
righteousness from the God of his salvation.

After the death of Charles Barney, Elizabeth married Rev. Moses Kiefer a minister, and the former president of Heidelberg University in Tiffin, Ohio. Mrs. Elizabeth Caldwell Dennis Barney Kiefer died on December 16, 1908. Mrs. Kiefer was buried in the North Ridge section of Oakland Cemetery where both her first and second husbands were also buried. 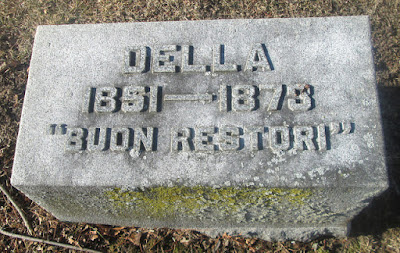 In block 2 of Sandusky’s Oakland Cemetery is a tombstone for a person whose name is listed simply as Della. She was born in 1851 and died in 1873. Underneath her name are the words “Buon Restori.”   This may be a slight misspelling of the phrase:  "Buon ristoro", which means "good comfort" in the Italian language. A reasonable search did not determine the surname of Della. Rest in peace!
Posted by Dorene from Ohio at 1:30 AM 0 comments 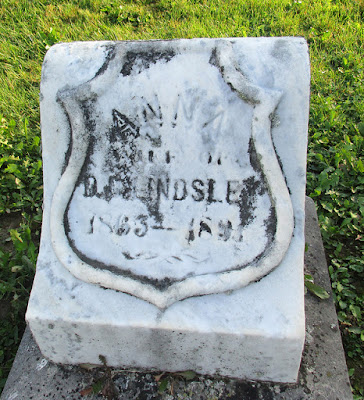 Sadly, Mrs. Anna Lindsley died from consumption at the age of 24, on May 26, 1891. She was buried at Sandusky's Oakland Cemetery.