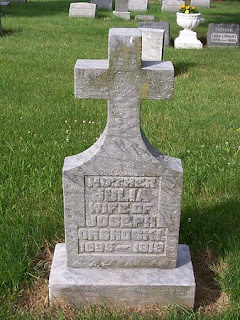 Julia Herzog was born in Hungary about 1885. According to her Passenger Record on the Ellis Island website, she arrived in the United States on February 21, 1904, on the ship Patricia, having departed from Hamburg, Germany. Julia married Joseph Orshoski on November 23, 1905 in Westmoreland County, Pennsylvania.

After moving from Pennsylvania to Dorcester, Virginia, eventually the family settled in the small village of Bay Bridge, Ohio in Erie County. Joseph was employed by the Medusa Cement Company. The couple had six sons.

Sadly, on July 19, 1919, Julia Orshoski died. Below is a photograph taken on the day of her funeral. She was buried in the Castalia Cemetery, next to her son Joseph Orshoski, Jr. 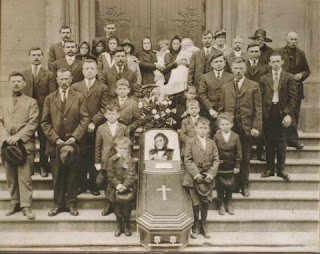 The family legend was that after his first wife died, Joseph said to his family back in Hungary, "Send me a new wife, one named Julia." And, in keeping with his wishes, a new wife was found. Julianna Szomolya came to the United States on September 30, 1921. She and Joseph were married, and had two daughters. Joseph and Julianna were married for over fifty years, and left a host of children, grandchildren, and great grandchildren.

Louise and Pauline were daughters of Mr. and Mrs. Vincent Kerber.
Posted by Dorene from Ohio at 10:11 AM 0 comments

Email ThisBlogThis!Share to TwitterShare to FacebookShare to Pinterest
Labels: Kerber

This lovely lady adorns the cemetery plot of the Vincent Kerber family in Sandusky, Ohio at the St. Mary's Catholic Cemetery.
Posted by Dorene from Ohio at 10:00 AM 0 comments