John H. Batcheldor: "Farewell my wife and children all..." 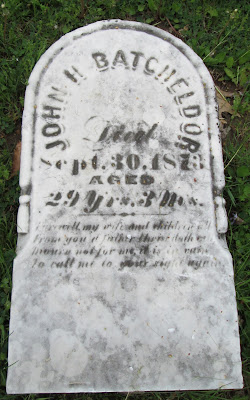 This tombstone, which now lies flat against the ground, is found at Sandusky's Oakland Cemetery. Not much is known about John H. Batcheldor. In the 1870 U.S. Census, his name is listed as "J. H. Bacheldorf." He was age 27, and listed his birthplace as Canada.  Mrs. Batcheldor,  listed only as "E," was 25.  (Death records of her sons indicate that Mrs. Bacheldor's maiden name was Elizabeth Krebs.) Mr. and Mrs. John H. Batcheldor had two young sons in 1870, William, age 5, and John, age 2. Tragically, John H. Batcheldor died in an accident on September 30, 1873. John was injured while working at the Woolworth's Handle Factory. A piece of machinery at the factory malfunctioned, and Mr. Batcheldor was struck forcefully by a piece of the machinery. He died several hours after being injured. An obituary found in the October 3, 1873  issue of the Sandusky Daily Register read:

"The young man, John Batcheldor's funeral took place from his residence on Jackson Street, yesterday afternoon and was attended by a large concourse of mourners and friends, including all of his fellow workmen. Woolworth's entire establishment was closed during the afternoon, in respect to the deceased, who by industrious and temperate habits had endeared himself to all his friends and acquaintances. As the funeral cortege moved slowly to the last resting place of him, who a few brief days ago was buoyant with the health and vigor of a young manhood  the scriptural admonition. 'In the midst of life we are in death,' was vividly brought to mind. The management of the factory deserve credit for the kindness displayed closing the establishment, and for attending the funeral."

The inscription on the tombstone of John H. Batcheldor reads:

Farewell my wife and children all
From you a father Christ doth call.
Mourn not for me, it is in vain,
To call me to your sight again.

Posted by Dorene from Ohio at 1:43 AM 1 comments 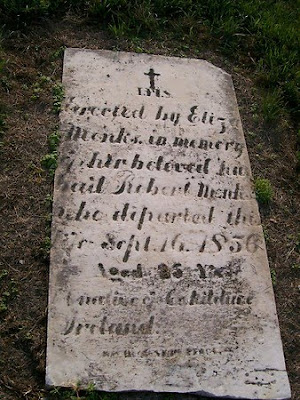 A flat tombstone at St. Joseph Catholic Cemetery in Sandusky honors the memory of Robert Monks. The inscription reads:

Erected by Eliza
Monk in memory of her
beloved husband Robert Monks
who departed this
life Sept. 16, 1856
Aged 25 years

A native of Co. Kildare
Ireland

May He Rest in Peace

The 1855 SANDUSKY CITY DIRECTORY lists the occupation of Robert Monks as firefighter.
Posted by Dorene from Ohio at 1:01 AM 0 comments 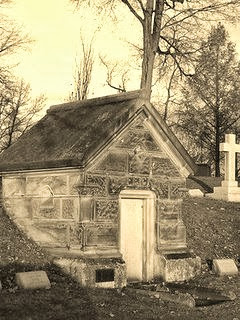 Click here to read more about the "Kings of Commerce" guided walks at Oakland Cemetery in Sandusky, Ohio  later this week. Maggie Marconi, Follett House administrator, will lead the walks which will take place at 10 a.m. on September 25, 26 and 28, 2013.

Posted by Dorene from Ohio at 8:33 AM 1 comments 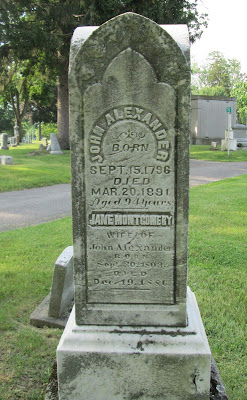 Four members of the Alexander family are honored in this vertical tombstone at Sandusky's Oakland Cemetery. John Alexander, a native of Ireland, was born on September 15, 1796 and he died on March 20, 1891 at the age of 94 years. The 1880 U.S. Census for Sharon Township, Richland County, Ohio, lists John Alexander as age 84, born in Ireland, and occupation as retired merchant. His wife Jane was aged 77, also was born in Ireland. Their daughter Agnes, aged 37, was born in Canada.

According to the Sandusky Register of March 24, 1891, John Alexander had died in Newark, Ohio, but his remains were brought back to Sandusky for burial, where he had formerly resided.  Jane Alexander, the former Jane Montgomery, predeceased her husband on December 19, 1886. Agnes Alexander, the daughter of John and Jane Alexander, died in Shelby, Ohio on January 3, 1894. 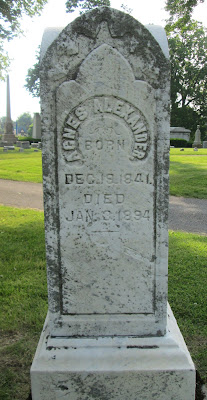 On another side of the monument is inscribed the name of Arthur Alexander, who died in August of 1861, at the age of 28. Most likely, Arthur Alexander was the son of John and Jane Alexander.

It appears that Arthur Alexander had been married. An inscription above his name reads:

To the Memory of My Dear Husband 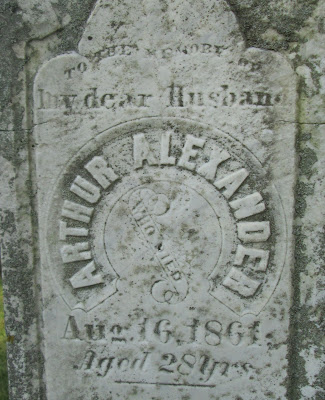 The Alexander monument at Oakland Cemetery is a lovely memorial to this family who moved away from Erie County, Ohio.
Posted by Dorene from Ohio at 2:03 AM 0 comments 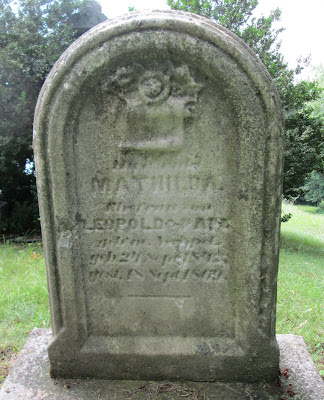 Mathilda Pape was married to Dr. Leopold Pape, an Ohio physician who was born in Germany. Marriage records on file at FamilySearch indicate that Leopold Pape married Mathilda Vaupel on October 18, 1862 in Hamilton County, Ohio. Sadly, Mrs. Mathilda Pape died of typhoid fever in Louisville, Kentucky, on September 18, 1869. She was buried at Sandusky's Oakland Cemetery. By 1880, Leopold Pape had re-married, and was residing with his wife Elizabeth in Ottawa County, Ohio. An obituary for Mathilda Pape appeared in the September 23, 1869 issue of the Sandusky Register.
Posted by Dorene from Ohio at 1:30 AM 1 comments 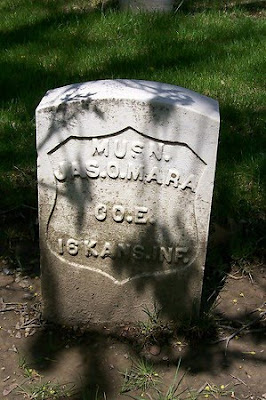 James O. Mara (sometimes listed as James O'Mara) is buried at the cemetery of the Ohio Veterans Home in Sandusky, Ohio. While his tombstone states that his military unit was Company E of the 16th Kansas Infantry, Mr. Mara's Civil War Pension record, available at Ancestry Library Edition, lists his two Civil War units as Company B of the Second Battalion of the 18th U.S. Infantry, as well as Company E of the 16th Kansas Cavalry.

James O. Mara died at the Ohio Soldiers' and Sailors' Home on December 26, 1917. He is buried at the Ohio Veterans Home Cemetery. Mr. Mara's obituary, which appeared in the December 27, 1917 issue of the Sandusky Register, reports that he was survived by four children. The article states that James O. Mara was known as "Buckskin Jim" by his comrades at the Veterans Home. It is said that a Native American gave that nickname to James O. Mara when he was a soldier in the western United States many years before.
Posted by Dorene from Ohio at 4:56 AM 0 comments 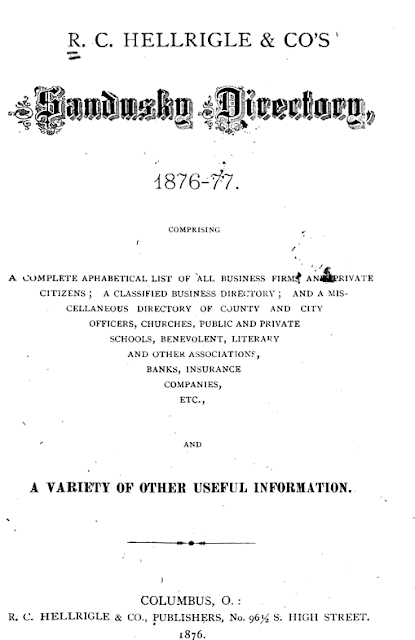 While I was browsing online is search of information on pioneer Sandusky residents, I came across the full-text of R.C. Hellrigle and Company's Sandusky Directory for  1876-1877. I found my Larkins ancestors residing on Fulton Street, and found that Patrick Larkins, my great-great-great grandfather was a foreman at Hubbard's lumber yard.

My Cross ancestors all lived on Railroad Street, now known as Pearl Street in Sandusky, Ohio.

Below is just a small portion of the classified business directory in the 1876-77 directory. 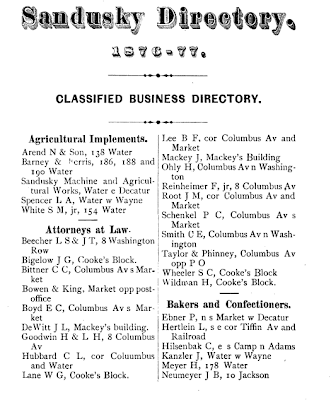 If you have ancestors from Sandusky, Ohio, check out R.C. Hellrigle and Company's Sandusky Directory, freely accessible at Google Books!

Zinc Monument Honoring the Memory of the Joseph Henderson Family

At the Perkins Cemetery in Erie County, Ohio is a beautiful zinc monument which honors the memory of the Henderson family. Hewson Peeke wrote in his book A STANDARD HISTORY OF ERIE COUNTY, OHIO, that Joseph Henderson was a pioneer settler of Perkins Township, having moved his family from Connecticut in 1835. He was a lifelong farmer. The monument was created by the Monumental Bronze Company in Bridgeport, Connecticut.

On the side of the monument which faces east is the name of Joseph Henderson, who died on January 18, 1863. 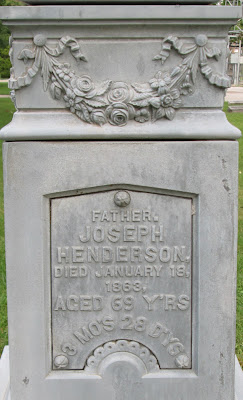 Above Joseph's name is a panel that does not have a name, just the words Grandmother, Died August 22, 1847, Aged 78 Years. 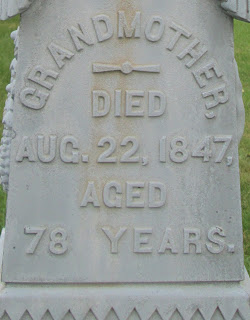 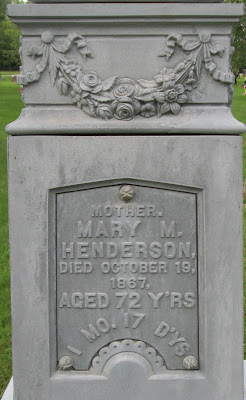 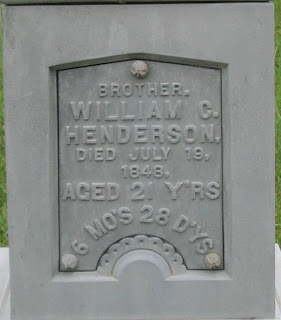 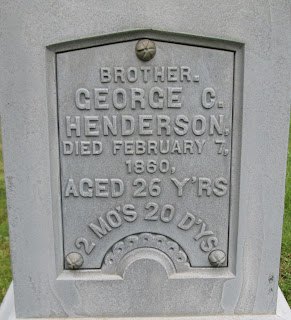 Though the monument was created in the late 1800s, all the inscriptions are still legible, and the ornamental details on the panels are exquisite. 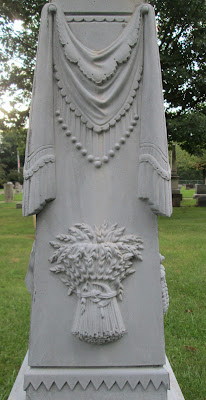 To read more about zinc monuments made by the Monumental Bronze Company, see these links.

*Catalog from the Monumental Bronze Company, from the Association for Graveyard Studies

Posted by Dorene from Ohio at 1:04 AM 0 comments 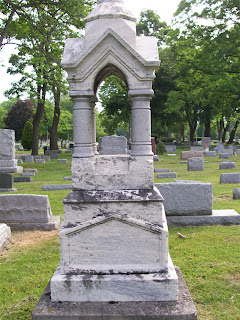 This lovely monument is in memory of Mrs. Emma Belle Vogel, the first wife of John P. Vogel, a hardware merchant from Oak Harbor. In the early morning hours of January 31, 1885, a group of nine people were coming home on a sleigh following a dance held at Port Clinton. The Lake Shore Railroad was running late, and in the midst of darkness and dense fog, the horse driven sleigh was struck by the train at the Three Mile Crossing between Port Clinton and Lacarne. Miss Jennie Hoople and Mr. Stephen S. Hall died instantly, and Emma Belle Vogel died several hours after the accident as a result of her injuries. The accident was covered by the February 1, 1885 issue of the New York Times, as well as by the Sandusky Register on February 1, 1885.

Mrs. Vogel was survived by her husband John, and an infant daughter named Gertrude. She was first buried in Oak Harbor, but notes on the Oakland Cemetery interment card indicate that she was reinterred at Sandusky's Oakland Cemetery on September 29, 1894. John P. Vogel remarried, in 1889, to Miss Millie Rantz. John and Millie Vogel had three daughters, named Arminta, Florence, and Esther. A brief biographical sketch of John P. Vogel appears in the book COMMEMORATIVE BIOGRAPHICAL RECORD OF THE COUNTIES OF SANDUSKY AND OTTAWA, OHIO, available in many northern Ohio libraries, as well as at the database Heritage Quest and at the Internet Archive. The article lists the maiden name of the first Mrs. Vogel as Miss Bella Hugle. 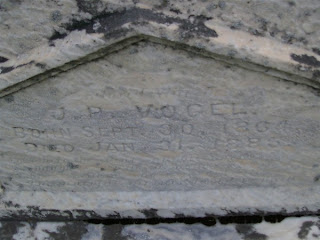 Posted by Dorene from Ohio at 1:33 AM 0 comments 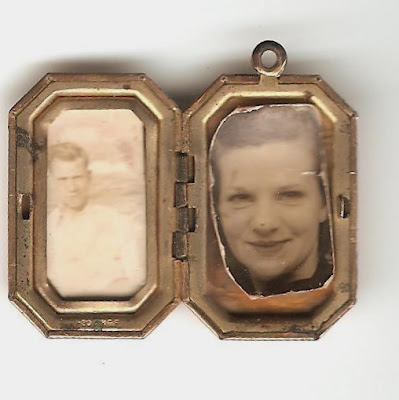 Pictured above is a locket that holds small pictures of my godparents, Morris and Cordelia (Lerch) Johnson.  Here is a picture of the outside of the locket. 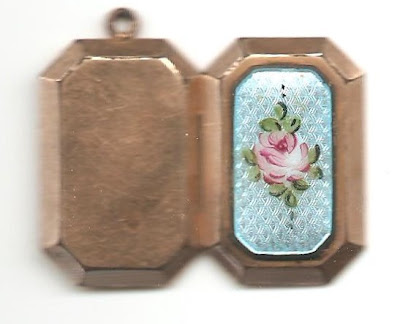 Cordelia was my mother's supervisor when she was a young woman, at Periodical Publishers. Cordelia was known as "Corky" by all who knew her well. My parents had us call the Johnsons "Aunt Corky" and "Uncle Morris," though they were not related to us by blood. On more than one occasion, when Mom was sick or in the hospital having a baby, Aunt Corky and Uncle Morris let us stay with them. They were always kind-hearted and made meals for all of us children. Sometimes Aunt Corky and Uncle Morris would take me on overnight trips to see Aunt Corky's son. They were wonderful folks, who worked hard, and opened their home to others quite often. After Aunt Corky died, Uncle Morris re-married a lady named Ann. Morris and Ann still stayed in close touch with Aunt Corky's sister and brother and their spouses. After Uncle Morris died, one day Ann stopped by and gave me this locket. It is something I will always treasure. Morris and Cordelia Johnson are buried at the Catawba Island Township Cemetery in Ottawa County. We all still miss them so! 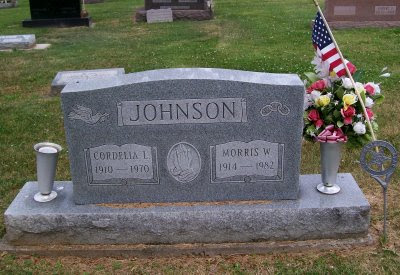