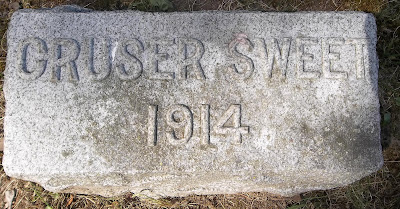 Oakland Cemetery interment records indicate that an infant of Mr. and Mrs. J. Sweet was stillborn, and was buried at Sandusky's Oakland Cemetery on July 27, 1914. A quick search at FindaGrave located a John E. Sweet, Jr., who was born in Sandusky, Ohio to John Emmett Sweet and Julie Cruser Sweet. Most likely this little one who was stillborn was the older sibling of John E. Sweet, Jr., and his or her first name was the maiden name of Julie Cruser Sweet, the mother of the baby. Cruser Sweet, who was born and died in 1914, is buried in Block 99 at Oakland Cemetery.
Posted by Dorene from Ohio at 1:18 AM 0 comments

Sentimental Sunday: Grandma and Grandpa Yeager with Their Friends 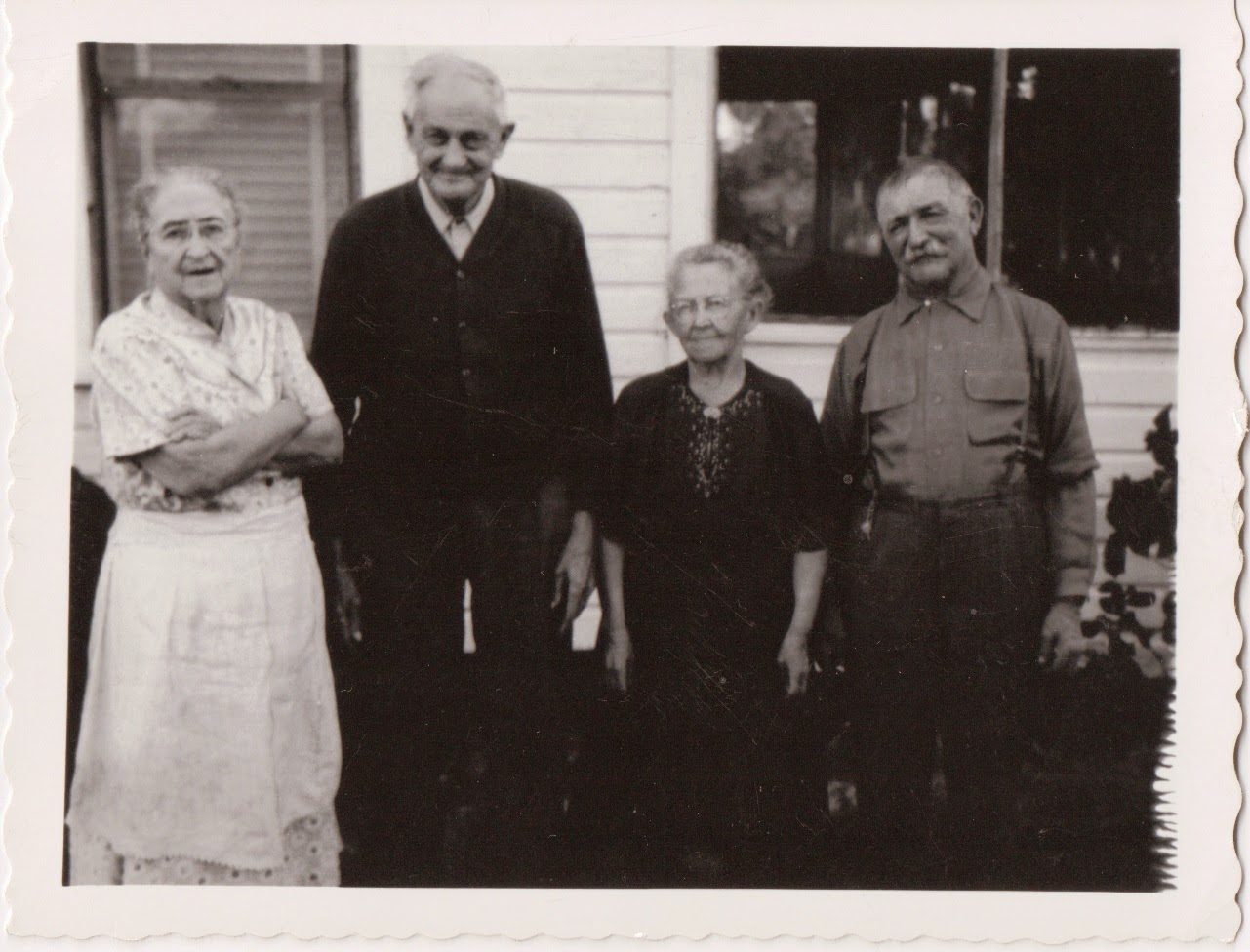 Above is an undated picture of my great grandparents, Lena and Andrew Yeager (on the right), with their friends, Mr. and Mrs. Otto Fabian. One out of state cousin shared this picture with me, and another cousin identified the couple standing next to Grandma and Grandpa. To be honest, I am not sure if the lady on the left is Otto's first or second wife. Census and vital records indicate  that his first wife was Amelia, and his second wife was named Celeste. Mr. and Mrs. Otto Fabian lived in Berlin Township for a time, and then they moved to Florida. Grandma and Grandpa Yeager once rode a bus all the way to Florida to visit with them. A newspaper article reported that Otto Fabian died in 1957 in Pinellas County, Florida. Thanks to my generous cousins for sharing their pictures and their knowledge of family history!
Posted by Dorene from Ohio at 1:30 AM 0 comments 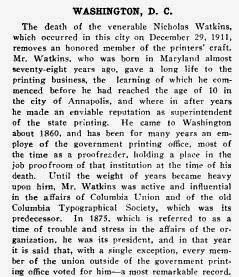 A transcription of this article reads:

WASHINGTON, D. C.
The death of the venerable Nicholas Watkins, which occurred in this city on December 29, 1911, removes an honored member of the printers' craft. Mr. Watkins, who was born in Maryland almost seventy-eight years ago, gave a long life to the printing business, the learning of which he commenced before he had reached the age of 10 in the city of Annapolis, and where in after years he made an enviable reputation as superintendent of the state printing. He came to Washington about 1860, and has been for many years an employee of the government printing office, most of the time as a proofreader, holding a place in the job proof room of that institution at the time of his death. Until the weight of years became heavy upon him, Mr. Watkins was active and influential in the affairs of Columbia Union and of the old Columbia Typographical Society, which was its predecessor. In 1875, which is referred to as a time of trouble and stress in the affairs of the organization, he was its president, and in that year it is said that, with a single exception, every member of the union outside of the government printing office voted for him—a most remarkable record.

Nicholas Watkins died on December 29, 1911. He was laid to rest at Rock Creek Cemetery in Washington D.C.  Paul Watkins, the young son of Nicholas and Mary A. Watkins, is buried in the same lot as his father.

Photo credit: Thank you to my nephew Tony for taking this photograph.


My nephew recently took these photographs of the monument honoring the memory of Marian “Clover” Adams, the wife of historian Henry Adams.  Marian Adams was the daughter of Robert W. Hooper and his wife, the former Ellen Sturgis. Marian Hooper married Henry Adams in 1872. The couple moved to Washington D.C. in 1877, where Marian became a popular hostess. According to the Encyclopedia Britannica, their home on H Street, across from Lafayette Park and the White House, became a center for the intellectual, artistic, and political elite of the city. After the death of her father, Marian “Clover” Adams became depressed. She took her own life on December 6, 1885. Henry Adams commissioned sculptor AugustusSaint-Gaudens to create a memorial for his wife.  The memorial, in Rock Creek Cemetery, was named The Mystery of the Hereafter and The Peace of God that Passeth Understanding by Saint-Gaudens, but it is commonly known as Grief. To read more about Marian “Clover” Adams, see the website of the Massachusetts Historical Society. The book FIVE OF HEARTS, by Patricia O’Toole (Clarkson Potter, 1990) provides an intimate look at the friendship between Henry and Marian Adams, John and Clara Hay, and geologist Clarence King.


Photo credit: Thank you to my nephew Tony for taking this photograph.
Posted by Dorene from Ohio at 5:30 AM 0 comments 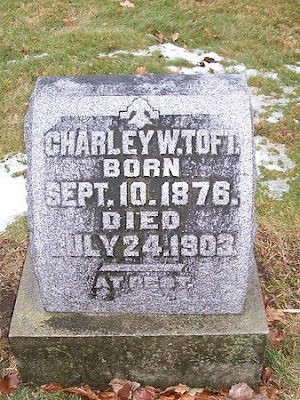 Charley W. Toft was born on September 10, 1876, and died on July 24, 1903, while still a very young man. Charley was the son of Christ Toft who lived on Pearl Street in Sandusky. The Sandusky Register of July 26, 1903 reported that Charles Toft's funeral was held first at the family home, and later at Zion Lutheran Church, with Rev. Theodore Stellhorn conducting the services. Burial was at Oakland Cemetery. At the base of the tombstone of Charles Toft are the words "At Rest."

Another Erie County resident, from the Perkins Township area, was also named Christian Toft. Christian Toft and his wife had a thriving dairy business. Today, Toft's dairy products are still known and enjoyed all across North Central Ohio.
Posted by Dorene from Ohio at 4:48 AM 0 comments

Email ThisBlogThis!Share to TwitterShare to FacebookShare to Pinterest
Labels: Toft 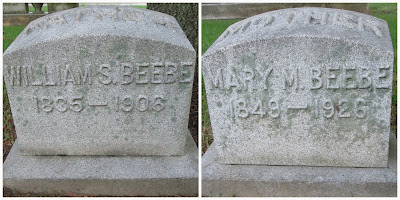 William S. Beebe and Mary M. (Covell) Beebe were both born to pioneer settlers of Perkins Township, Erie County, Ohio. They were married in Perkins Township on January 19, 1871.

In the 1880 U.S. Census, William S. Beebe stated that his occupation was farmer. His wife Mary as a housekeeper, and they had two children, Jennie, age 7, and an infant son named George. William S. Beebe died on November 11, 1906. He was buried in Perkins Cemetery in Erie County, Ohio. Mrs. Mary M. Beebe died on July 11, 1926. She was buried next to her husband in the Perkins Cemetery.

Civil War Encampment to be held in August, 2014 at Ohio Veterans Home 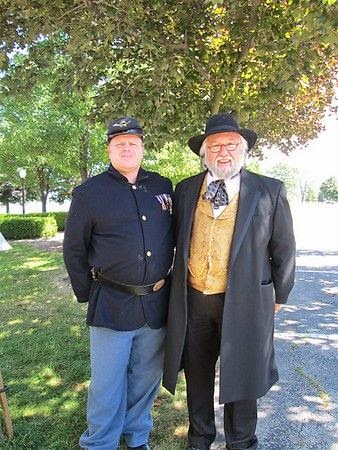 A Civil War Encampment will be held at the Ohio Veterans Home on August 23 and August 24, 2014. My family and I attended this event in 2012 and 2013, and it is wonderful! My grandchildren learned about American history in a very "hands on" way. Here are some of the highlights which will be taking place:

An article in the Sandusky Register reported that in conjunction with the Civil War Encampment, a concert by the 73rd Ohio Volunteer Infantry Regimental Band will be performed at the State Theatre on August 23rd. The fee will be $5.00 per person.

If you live close enough to attend this event, it is educational, interesting, and a lot of fun! 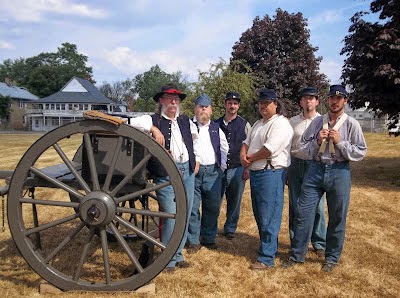 Posted by Dorene from Ohio at 7:04 PM 0 comments 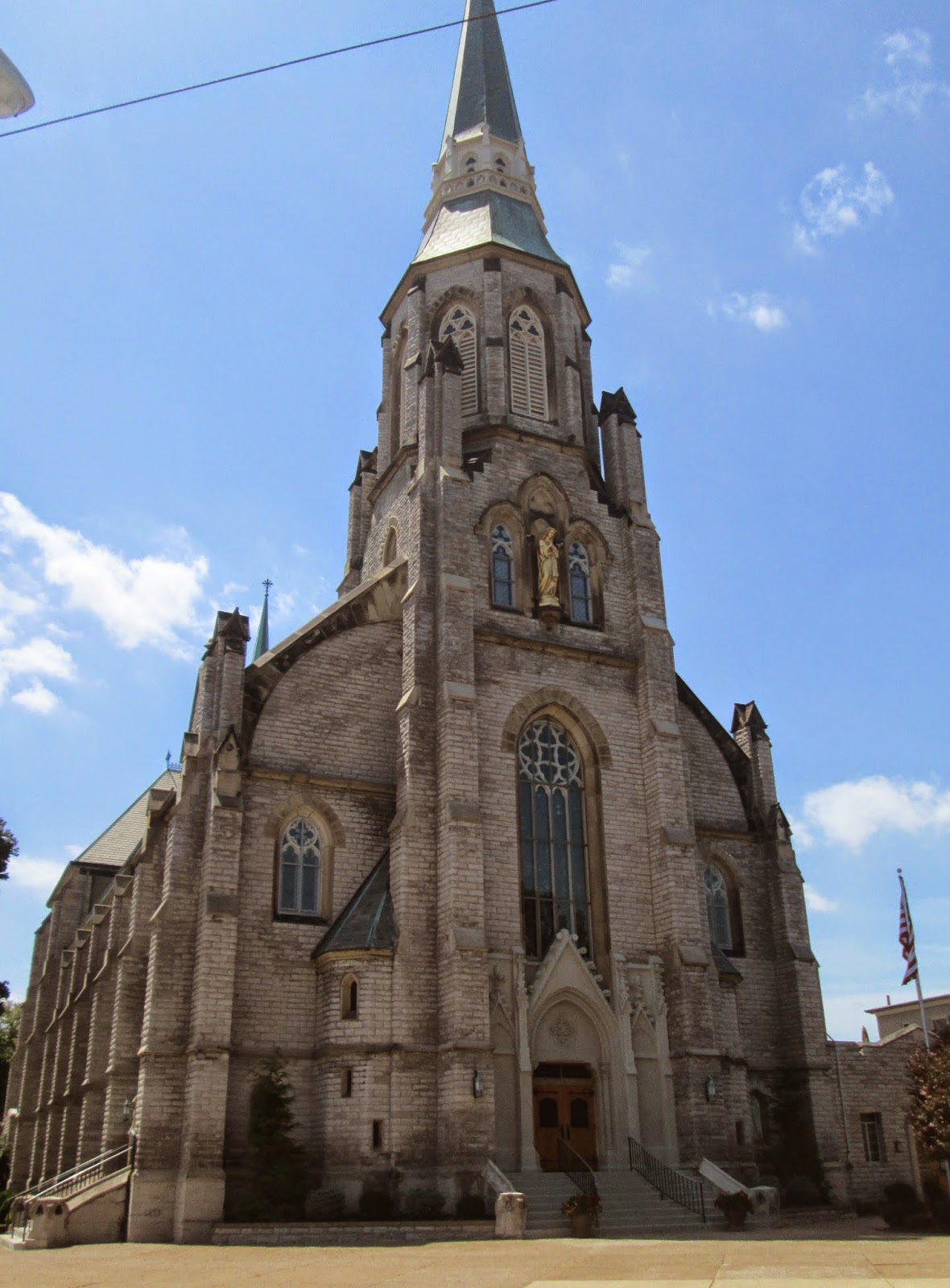 St. Mary's Catholic Church is located at 429 Central Avenue in Sandusky, Ohio. While it was originally the parish where most Catholics of German descent belonged, when my great grandmother, a native of Hungary, passed away in 1919, her funeral was held at St. Mary's Church. This marker provides a brief history of the church. 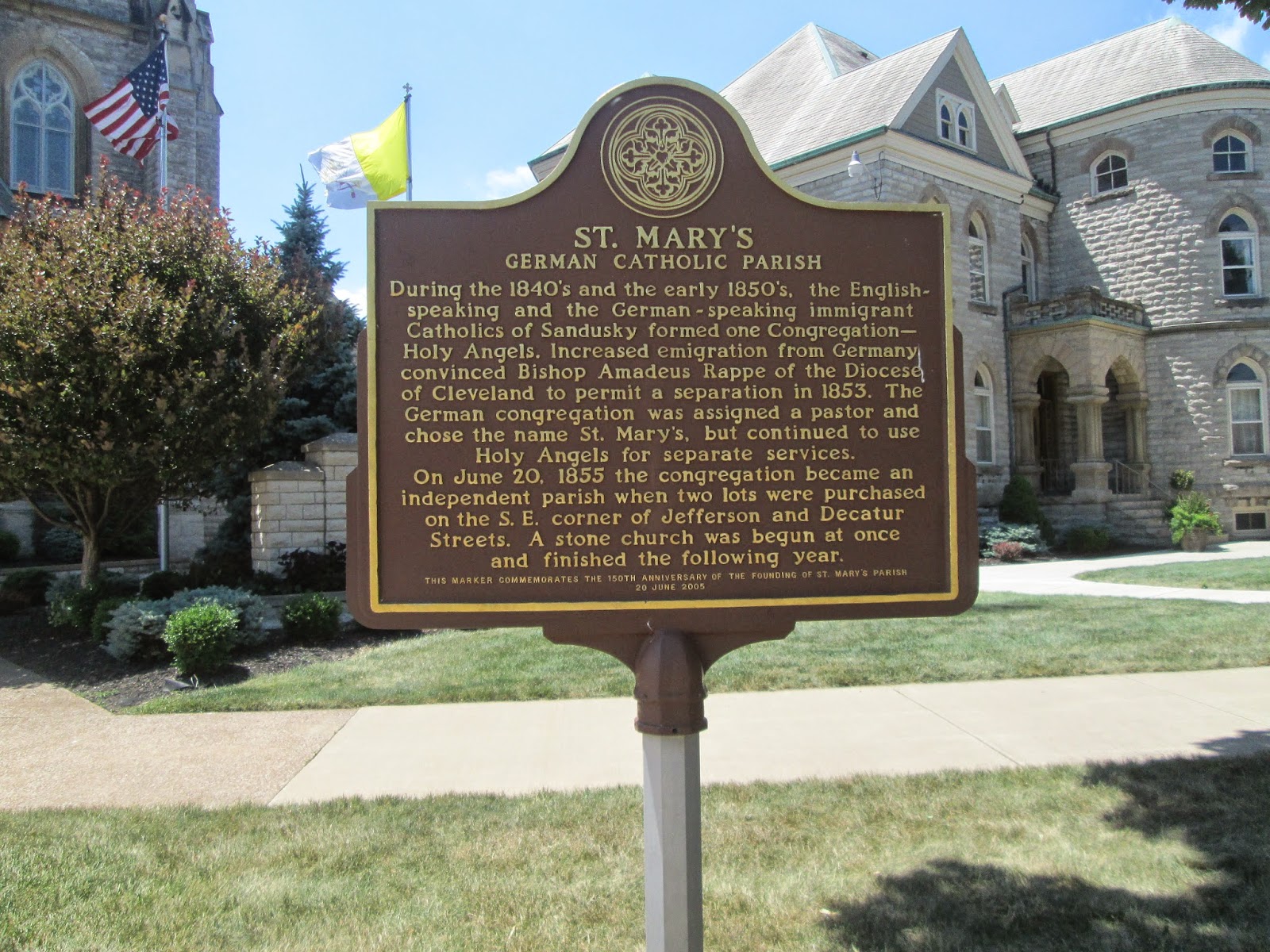 The reverse side of the marker tells us details about the church's architect, F.G. Himpler. 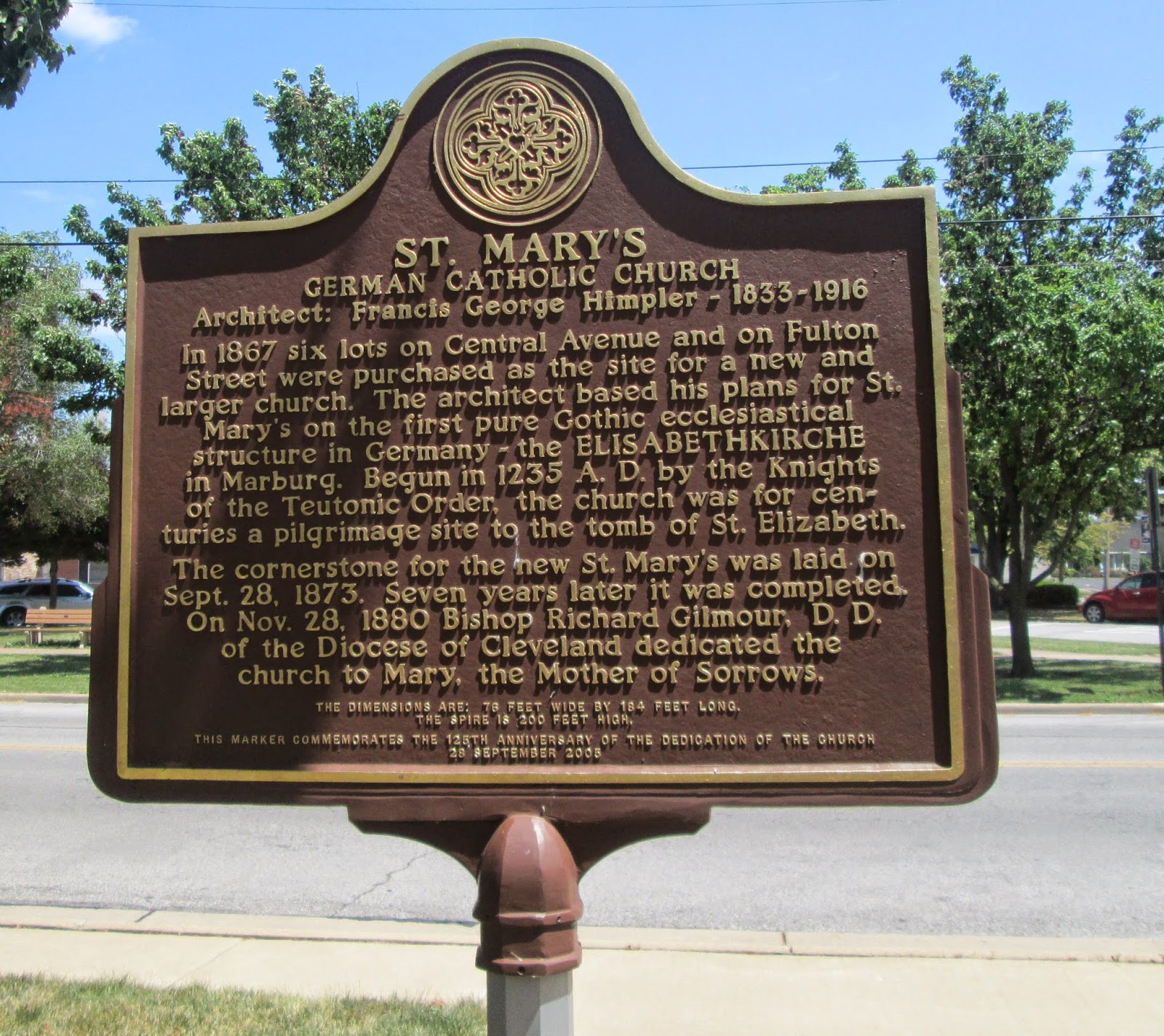 Built of limestone, St. Mary's Church has been active in Sandusky for several decades. Click here to see excerpts from the St. Mary's Parish Quarterly from July, 1922. 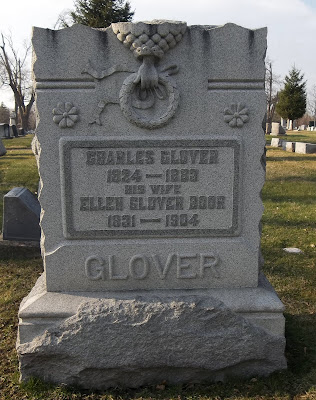 The 1882 Sandusky City Directory lists Charles Glover as a dry goods merchant. Both his residence and business were located on Hancock Street. Though the tombstone reads that Charles Glover died in 1883, the Sandusky Register of September 29, 1884 indicates that Mr. Glover passed away on September 27, 1884. He was buried at Sandusky's Oakland Cemetery. Mrs. Ellen "Nellie" Glover wed William Boor on October 15, 1891, according to Erie County Probate Court records. Mrs. Nellie Boor died on March 30, 1904. Details from the will of Ellen "Nellie" Glover Boor were discussed in the Sandusky Star on April 2, 1904. Mrs. Boor requested that the remains of her first husband, Charles Glover, be re-interred in a vault along with her remains, and that a joint monument be erected at Oakland Cemetery. She left portions of her estate to two individuals in Sandusky, and a portion to Trinity Methodist Church. The monument which honors the memory of Charles Glover and Ellen Glover Boor is adorned with a wreath and two flowers. Though over a century old, the majestic Glover-Boor monument is still very legible.
Posted by Dorene from Ohio at 1:00 AM 0 comments 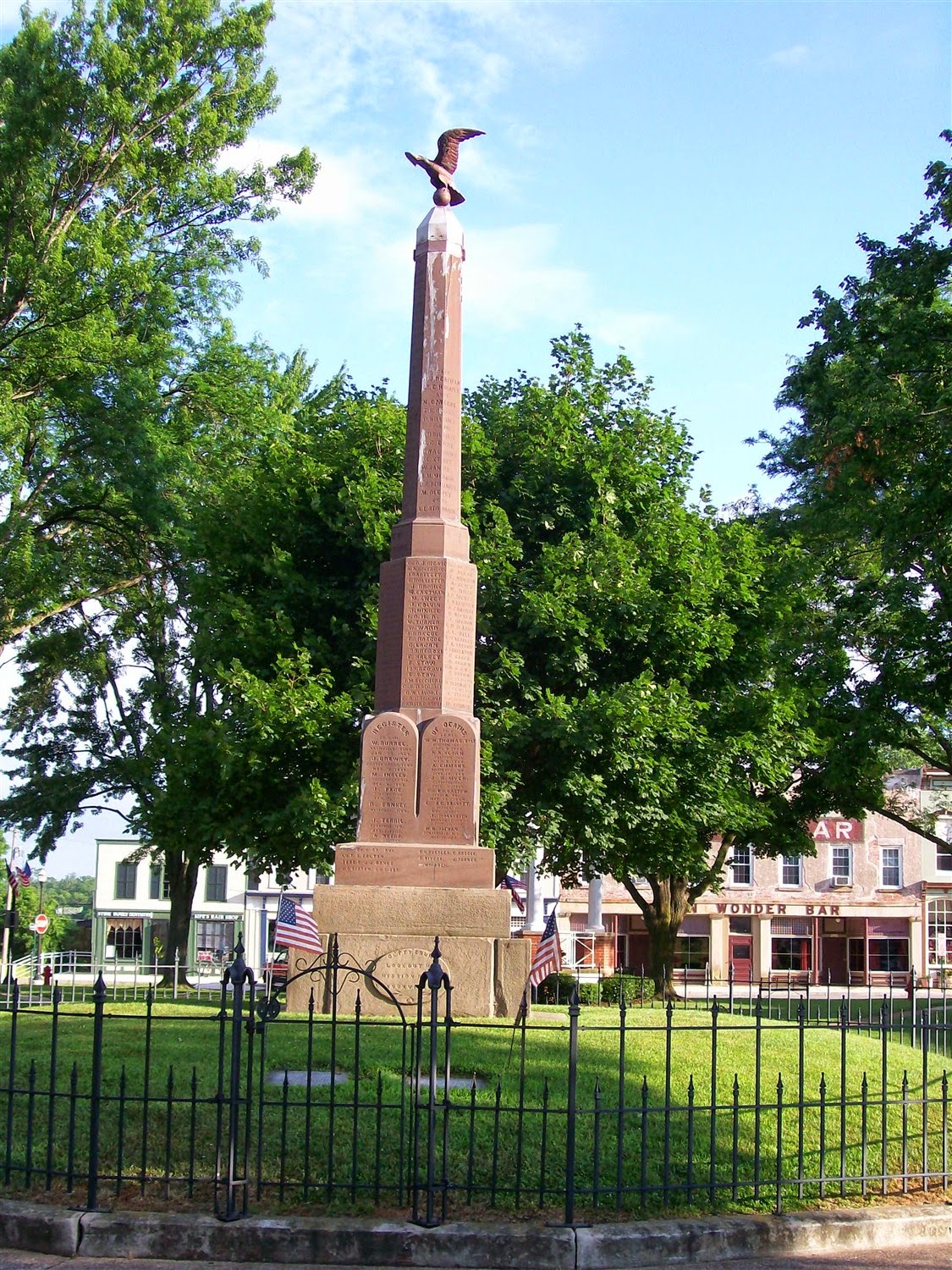 The monument in honor of soldiers and sailors from Milan who served in the American Civil War was dedicated in the town square of Milan, Ohio on July 4, 1867. According to a Milan, Ohio website, the monument changed the area that had formerly been a hitching post area into a village park. The names of several Milan residents who served their country in the war are listed on the monument. 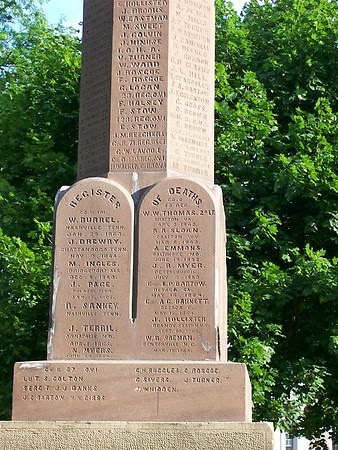 The village of Milan, Ohio is a charming place to visit. It is well known as the birthplace of Thomas Edison. The town square is bustling with restaurants, businesses, and a newly renovated public library.  Flags fly high in the town square of this delightful Ohio town. 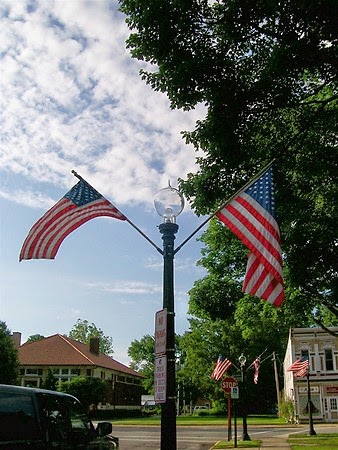 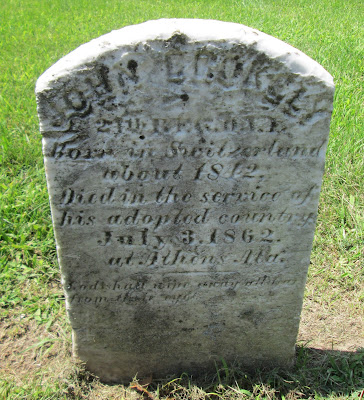 John Brokely is buried in Sandusky's Oakland Cemetery. The inscription on his tombstone reads:

A Bible verse at the bottom of John Brokely's tombstone reads:

God shall wipe away all tears
from their eyes

According to History of the Firelands, Comprising Huron and Erie Counties, Ohio, by W.W. Williams (Leader Printing Co., 1879), John Brokely was in Company C of the 24th Ohio Volunteer Infantry. This regiment was organized at Sandusky, Ohio. Though Mr. Brokely's tombstone lists his death date as July 3, 1862, the History of the Firelands lists his death date as July 4, 1862. 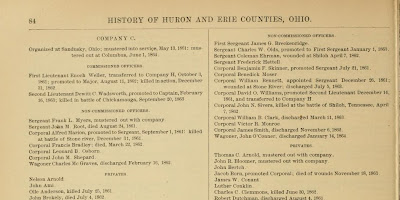 Thank you for your service to your country, John Brokely!
Posted by Dorene from Ohio at 1:30 AM 0 comments

"Blooper" Picture from Mom and Dad's Wedding in 1950 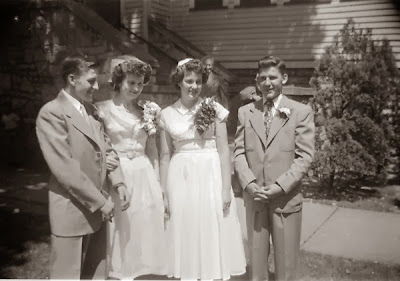 Recently I found a stray negative in a box of old pictures.I asked my co-worker if he could scan it, and it turned out to be a "blooper" picture from my parents' wedding photographs. Pictured above in front of St. Paul's Lutheran Church in Sandusky, Ohio,  are: Paul Orshoski, Sr., Joyce Parker, Sally Parker, and Wayne Orshoski. My parents, Paul and Joyce, were married by Rev. J.A. Griffith on July 1, 1950. Sally is Mom's younger sister, and Wayne is my dad's younger brother. You can just barely see Rev. Griffith, just behind my Aunt Sal, on the steps of the church. I think this picture didn't get in with the regular wedding photos, because all those in the wedding party are not looking at the camera. My close friend Ginny, lives right across from this church on Central Avenue. When I sit with Ginny on her porch, I can view this spot, and remember the stories Mom told me about how Rev. Griffith confirmed both my mom and her mother, married my parents, and baptized several of the infants in our big family.
Posted by Dorene from Ohio at 1:30 AM 2 comments