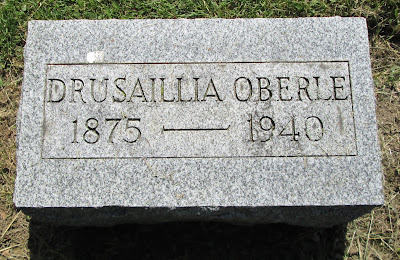 According to her death record, Drusaillia Oberle was born in Newbury, Ontario, Canada in 1875 to William and Margaret Crimm. Records on file at FamilySearch indicate that Ralph Oberle and Drusaillia Crimm were married in Monroe, Michigan on January 1, 1918. Eventually the couple moved to Sandusky, Ohio. The Sandusky Star Journal of December 27, 1940 reported that Mrs. Drusaillia Oberle died on December 26, 1940, following a brief illness. Mrs. Oberle was survived by several brothers and sisters, residing in Canada and Michigan. Funeral services for Mrs. Oberle were held at the Charles Andres & Sons Funeral Home, with Rev. T.J.C. Stellhorn officiating. Burial was at Oakland Cemetery. Drusaillia's first name is most likely a variation of the name Drusilla, of Latin origin. 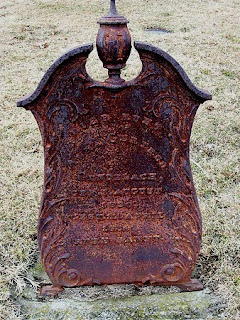 Anna G. Giesse was born in Melsungen, Germany in the province of Hesse-Kassel on August 1, 1829. Her parents were Johann Giesse and Anna Wenk. She married Leonard Gundlach on February 12, 1846. Mrs. Anna Gerturde Giesse Gundlach passed away on April 14, 1884.

In the 1880 U.S. Census for Erie County, the listing for the family gave the surname spelled as Grunlach:

Email ThisBlogThis!Share to TwitterShare to FacebookShare to Pinterest
Labels: Gundlach 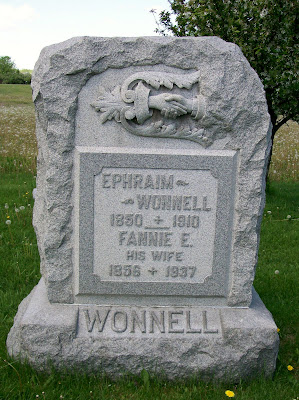 Clasped hands adorn the top of the tombstone for Ephraim and Fannie Wonnell. Clasped hands can represent a welcome to the heavenly realm.
Posted by Dorene from Ohio at 1:30 AM 0 comments 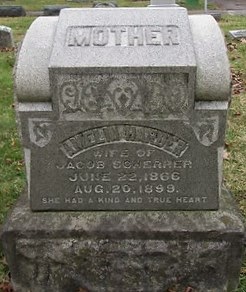 Amelia Harder was born on June 22, 1866. On June 19, 1884, Amelia Harder married Jacob Scherrer in Erie County, Ohio. The young Amelia Harder Scherrer died on August 20, 1899 at the age of 33. Funeral services for Mrs. Scherrer were  held at the Scherrer residence, and at St. Stephen's Church,  a with Rev. William Leonhardt officiating. Burial was at Oakland Cemetery. Amelia Scherrer was buried at Sandusky's Oakland Cemetery. The inscription on her tombstone reads:

She had a kind and true heart.

Obituaries for Mrs. Amelia Scherrer appeared in the August 22 and August 23, 1899 issues of the Sandusky Register.
Posted by Dorene from Ohio at 1:30 AM 0 comments 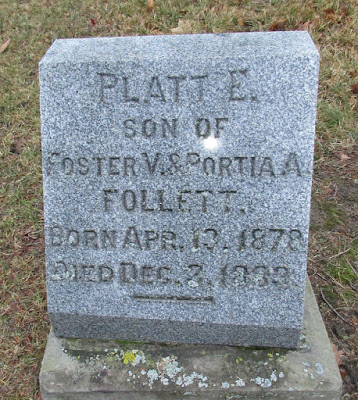 Platt Eli Follett was born on April 13, 1878 to Foster V. and Portia A. (Bartholomew) Follett. Both his father and grandfather were veterans of the Civil War. Sadly, Platt E. Follett died from diphtheritic croup on December 3, 1883. He was buried in the family lot at Sandusky's Oakland Cemetery.  Platt Eli Follett's first name was the same name as the surname of his Aunt Susan Follett's husband William Augustus Platt.
Posted by Dorene from Ohio at 1:30 AM 0 comments