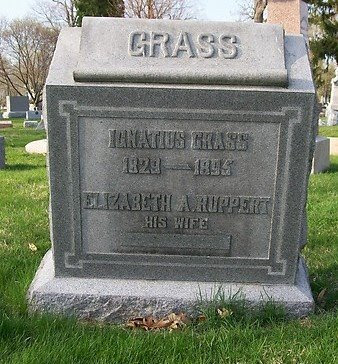 According to the Erie County 1880 Census, Ignatius Grass (his first name was incorrectly spelled Iguns in the census) was born in 1829 in Austria. His occupation was given as "bandage maker." 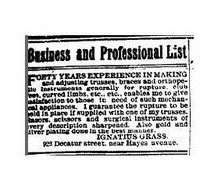 An advertisement in the Sandusky Register of August 8, 1894 indicates that Mr. Grass made braces, trusses, and other medical devices and surgical equipment. He also sharpened tools, and offered gold and silver plating services. His business office was at Decatur Street near Hayes Avenue, which today is the location of the Firelands Regional Medical Center and the Medical Arts Building.

Marriage records on file at Erie County Probate Court provide the date of December 29, 1880 as the day that Ignatius Grass married Elizabeth Ruppert. Ignatius Grass died in either the very last few days of December 1894, or the first few days of January, 1895. His funeral service was held at his Decatur Street home, with Rev. Balzer from St. Stephen's Church officiating. Ignatius Grass was buried in Oakland Cemetery on January 2, 1895. Elizabeth Ruppert Grass died on December 16, 1921.
Posted by Dorene from Ohio at 4:53 AM