George Jacob Schweitzer: Our Only Son and Brother 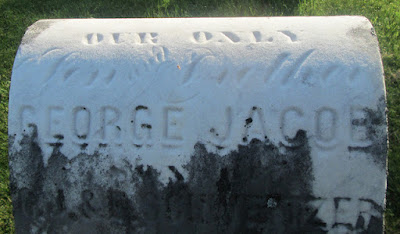 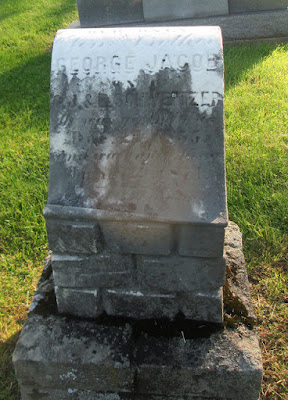 Election Song Sung by my Ancestors in 1896 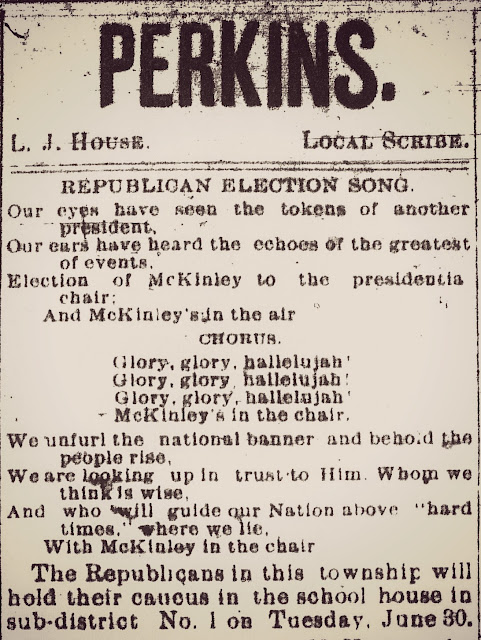 Recently I ran into this article from the June 23, 1896 issue of the Sandusky Register. One of my House ancestors wrote a column which highlighted events in Perkins Township of Erie County, Ohio. The Republicans of Perkins Township were to meet at the school house for a caucus on June 30. The words to their "Republican Election Song" were sung to the tune of the Battle Hymn of the Republic. Below is a transcription of the first verse and chorus.

Our eyes have seen the tokens of another president.
Our ears have heard the echoes of the greatest of events.
Election of McKinley to the presidential chair:
And McKinley's in the air. 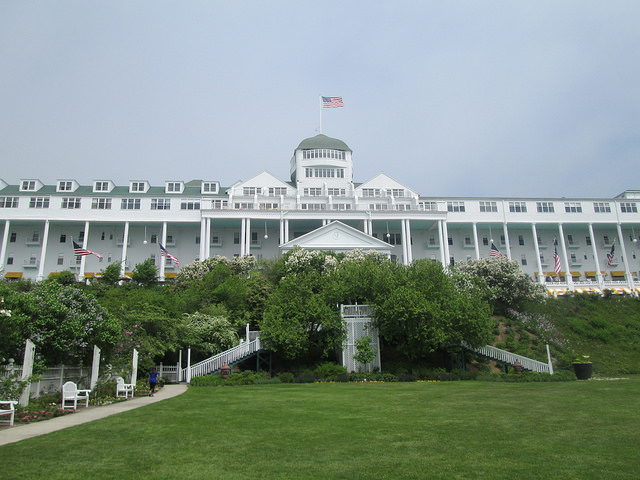 Recently I took my very first charter bus trip, which included a visit to Mackinac Island, Michigan. We got to have luncheon at the Grand Hotel where the buffet offered outstanding selections of fresh fruit, fish, meat, and intricately decorated desserts. This hotel is so gorgeous! The porch allows you to have a beautiful view of the lake, and the grounds, which are beautifully landscaped. 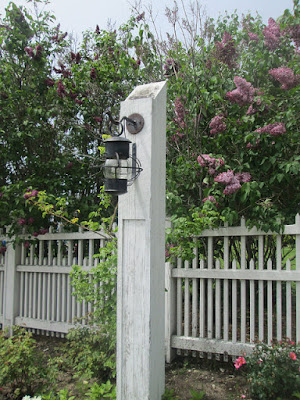 Many politicians and celebrities have stayed at this wonderful hotel, and two movies were filmed here! Ethel Merman swam in the swimming pool of the Grand Hotel during the filming of the movie "This Time for Keeps."  No cars are allowed on Mackinac Island, so transportation is by foot, bicycle, or horse drawn carriages or taxis. 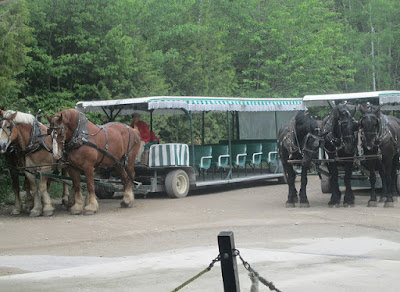 I am reasonably sure my ancestors did not ever stay at the Grand Hotel, but maybe yours did! A visit to the Grand Hotel is like traveling back in time. 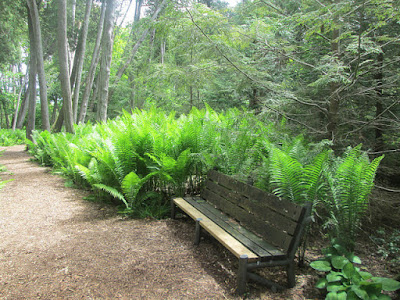 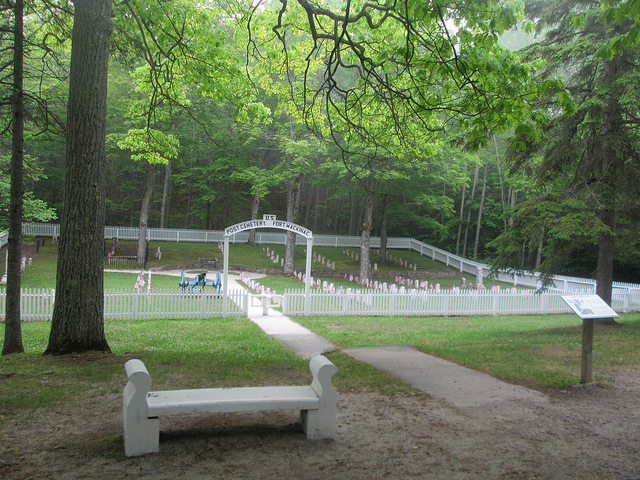 The Fort Mackinac Post Cemetery is located on Mackinac Island, nor far from Fort Mackinac, a former British and American military post. You can learn more about the Fort Mackinac Cemetery, and those interred there, at these sites:

Posted by Dorene from Ohio at 3:50 PM 0 comments 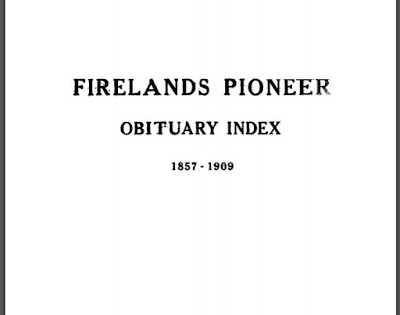 The index to obituaries which appeared in the Firelands Pioneer between 1857 and 1909 is available online at the Cincinnati Virtual Library. The Firelands Pioneer is a journal which features historical articles about the earliest settlers of Huron and Erie Counties. Click here to view this index. The index is in a pdf format, and is easily browsable as you page up and down the 22 pages. Most larger libraries in northern Ohio have the Firelands Pioneer in their local history section. Several issues of this excellent resource are also found at the Internet Archive. 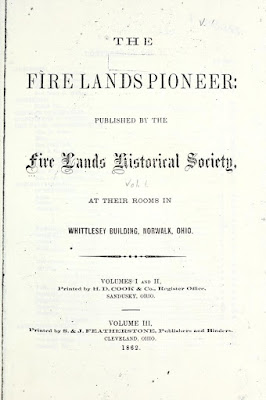 Locating the Tombstones of the Loved Ones of My College Friend 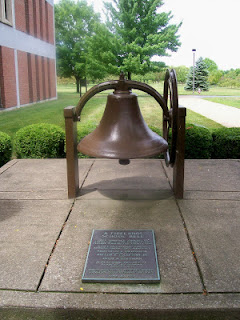 Recently I touched base with an old college friend with whom I attended BGSU Firelands, in the years shortly after the branch campus opened. Mark said that he was interested in my blogging about tombstones in graveyards in Northern Ohio. He wondered if I had ever seen the tombstones of his parents or maternal grandparents. After consulting with Catholic Cemeteries of Sandusky, I was able to learn the location of the tombstones of his parents and grandparents at Calvary Cemetery on the west side of Sandusky. 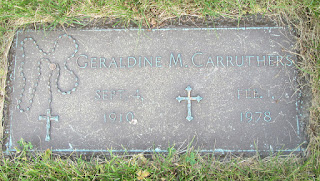 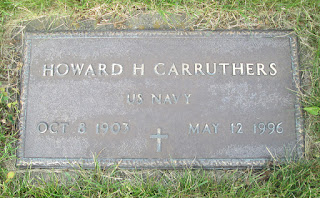 Howard H. Carruthers, passed away in Florida on May 12, 1996. He was a retired research and development chef at Sam Stein Associates, and he had formerly been an executive chef and an instructor in culinary arts. Mr. Carruthers was survived by his second wife Loretta, as well as four daughters, a son, a sister, and several grandchildren, great grandchildren and great great grandchildren. Howard was buried next to his first wife Geraldine, at Calvary Cemetery in Sandusky, Ohio. Also buried at Calvary are the parents of Geraldine Fees Carruthers. Her mother, Ethel Fees died in 1949. 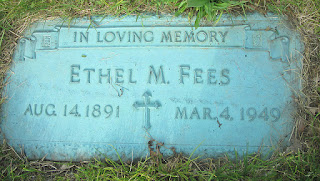 Ethel Fees died after a brief illness, at the age of 57. She had been a member of Holy Angels Catholic Church. Her husband Charles died in 1969. 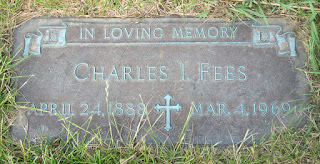 Mr. Charles Fees died twenty years to the day after his wife passed away. Mr. Fees had worked for several years as a carpenter at the Lyman Boat Works. He was survived by a son and daughter, eleven grandchildren and sixteen great  grandchildren, as well as three sisters and three brothers and numerous nieces and nephews. Mr. and Mrs. Charles Fees were buried at the Calvary Cemetery in Sandusky, Ohio. 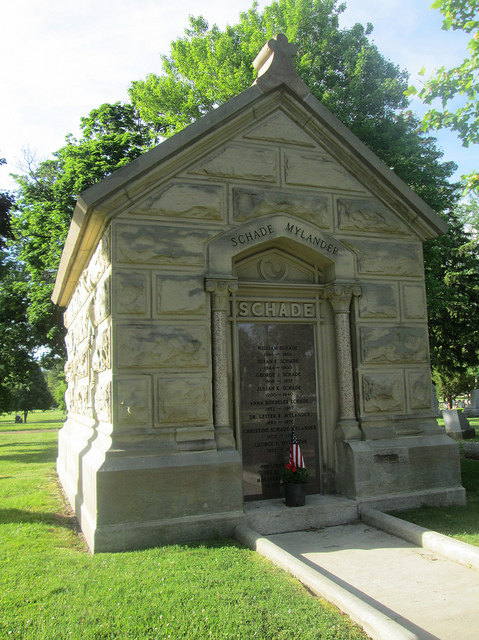 A new door has been put in place on the Schade-Mylander Mausoleum at Sandusky's Oakland Cemetery. The mausoleum is the final resting place for several members of the Schade and Mylander families. Here is a closer view of the names on the door. 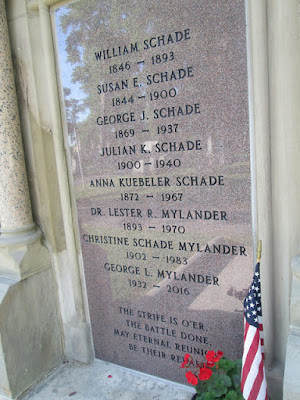 
The following inscription is located under the name of George L. Mylander, the member of the family who passed away most recently.

The strife is o'er
The battle done.
May eternal reunion
Be their reward. 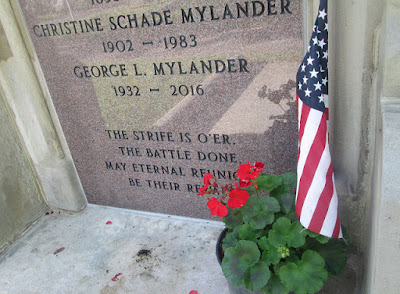 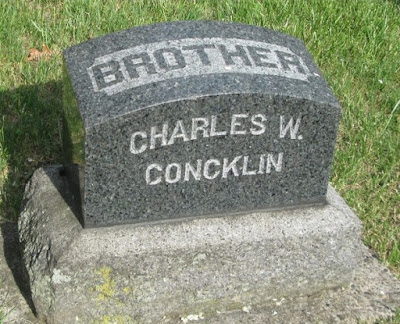 Charles W. Concklin (sometimes spelled Conklin) was a private in Company E of the 60th Ohio Volunteer Infantry during the Civil War. He died in battle at Cold Harbor, Virginia on June 3, 1864, at the age of 19. He was buried at Perkins Cemetery in Erie County, Ohio. He was sadly missed by his family.
Posted by Dorene from Ohio at 1:30 AM 0 comments