In the 1880 U.S. Census, Joseph Delor (spelled Dellor in the Census) was age 29, residing in Sandusky, Ohio with his wife and three children. He stated that his parents had both been born in France, and his occupation was gardener.  On April 26, 1887, Joseph A. Delor died at the age of 37. He left behind a wife and four children. Mr. Delor was a member of the Knights of St. John and the St. Patrick's Society. He was buried in St. Mary's Cemetery in Sandusky, Ohio. Brief obituaries for Joseph Delor appeared in the April 27, April 28, and April 29, 1887 issues of the Sandusky Register.

It appears that the maker of the monument which honors J.A. Delor was Ambrose Lieb. Note the name A. Lieb at the bottom right of the tombstone. 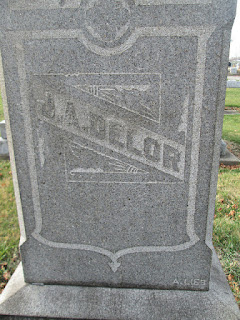 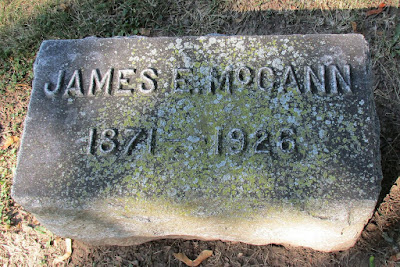 James Edward McCann was born in 1871 in Sandusky, Ohio to Mr. and Mrs. Owen McCann, who were both natives of Ireland. James E. McCann worked as a letter carrier for the U.S. Post Office in Sandusky for over thirty years. Mr. James E. McCann passed away at Providence Hospital on April 25, 1926, following a lengthy illness. He was survived by his wife and his daughter Mary, who at that time was a college student at the Western Reserve University. Mary McCann would go on to  be the head librarian at the Sandusky Library for several years. James E. McCann was buried at Sandusky's Oakland Cemetery.
Posted by Dorene from Ohio at 1:30 AM 0 comments

Hungarian Baptism Record from 1834 of a Possible Ancestor

As I was refining a pedigree chart in FamilySearch, a hint popped up. It was a Roman Catholic baptism record from Felsovadasz, Hungary, which I know to be the birthplace of my great grandfather Joseph Orshoski (sometimes spelled a wide variety of other ways!) The infant was named Josephus Orsosski, and he was baptized on March 18, 1834. His father was listed as Joseph Orsosski, and his mother was Anna Kerekes. I am not 100% sure that this is my direct ancestor, but I am reasonably sure he is related to my dad's side of the family. Take notice when a hint pops up in your genealogical research! This infant may be an early member of the Orshoski/Orszacky/Orsosski family, some of whom are pictured below on the occasion of my great grandmother's funeral held at St. Mary's Catholic Church in Sandusky, Ohio in 1919. She died very young, leaving Grandpa Joe with six young sons. 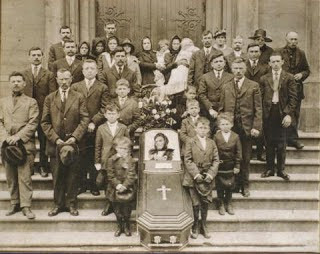 Posted by Dorene from Ohio at 3:01 PM 0 comments 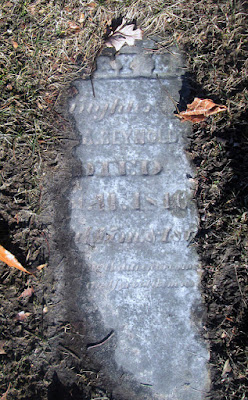 In Lot 11 of Block 2 at Sandusky's Oakland Cemetery, is a flat stone which honors the memory of Mary Reynolds. Little Mary died in 1846 at the age of 17 months. To date, other members of Mary's family have not been identified.

Though some of the words have been covered by the ground, or worn away over the passage of many years,  it appears that this verse, from Matthew 19:14 has been  inscribed on Mary's stone:

"But Jesus said, Suffer the little children, and forbid them not, to come unto me: for of such is the kingdom of heaven."
Posted by Dorene from Ohio at 1:30 AM 0 comments

A Sobering Discovery: Parker Siblings in the Union Workhouse 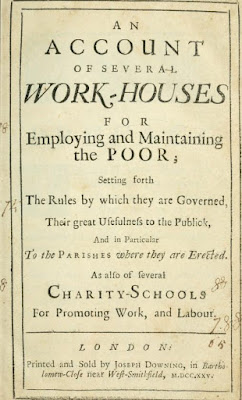 Pictured above is the cover of a book from the Internet Archive entitled An Account of Several Work-Houses For Employing and Maintaining the Poor. In the 1700s and 1800s, many of England's poor were sent to workhouses, where the residents worked in exchange for room and board. My ancestor Joshua Parker (the elder) was listed as age 40 in the Census for Donington, Lincolnshire, England in 1841. Joshua and his wife Hannah had seven children at that time, ranging in age from one up to a son in his teens. It appears that Hannah Parker died sometime between 1841 and 1851, as several of the children of Joshua and Hannah Parker show up in the 1851 Census as paupers residing in the Union Workhouse in Spalding, Lincolnshire, England. Reuben, age 14 (spelled incorrectly as Rueben); James, age 11; Jesse, age 6; and Mary, age 9, are are in the Union Workhouse. By this time, the oldest Parker child, Joshua (born about 1822) was soon to be on his way to America, where he settled in Monroeville, Huron County, Ohio. Eventually, Reuben, James, Jesse and Mary would also make their way to the United States. James Parker moved in Indiana. Reuben Parker and another son John Parker became prosperous farmers in Huron County, Ohio. Jesse Parker served in the Civil War, and he and his wife moved to Lenawee County, Michigan. Mary Ann Parker married Josiah Holden, and they resided in Wakeman, Ohio. While we do not know the outcome of all the children of the elder Joshua Parker and his wife Hannah, we know that many settled in the MidWest, and had happy families and productive lives. Below is a picture from a Parker Reunion held in the 1920s. 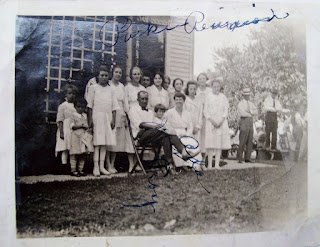 Recently I was able to connect with some distant cousins on the Parker line, through 23andme. I am so glad that those Parker youngsters were able to move out of the workhouse in Lincolnshire!
Posted by Dorene from Ohio at 4:08 PM 0 comments 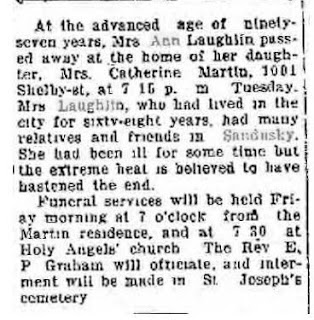 This brief obituary for Mrs. Ann Laughlin appeared in the Sandusky Star Journal on August 1, 1917. Mrs. Ann Laughlin (sometimes spelled Loughlin) was born in Ireland, and moved to Sandusky, Ohio in 1849. In her later years, she made her home with her daughter, Mrs. Catherine Martin, on Shelby Street. Mrs. Laughlin died on July 31, 1917, at the age of 68. Her son, William T. Martin, told many stories about his beloved "Gram" in the book OUR OLD TOWN AS SHE USED T' BE, published in 1959 by the Pageant Press. He tells of stories his grandmother told him, in which she comforted the sick and mourning people of Sandusky during the cholera epidemic. During the Underground Railroad days, she took food to fugitive slave who were hiding in an old barn near the old B&O Railway yard in Sandusky. To view  this book, and learn more about Mrs. Ann Laughlin, visit the Sandusky Library Archives Research Center. Though I could not determine the exact location, Mrs. Laughlin was buried in the St. Joseph Catholic Cemetery in Sandusky, Ohio. 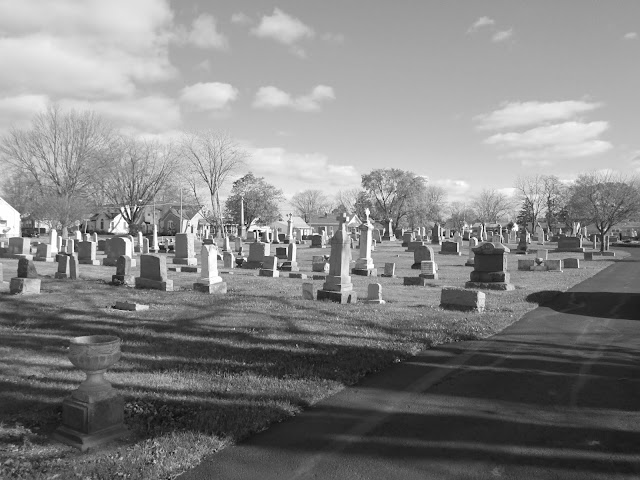