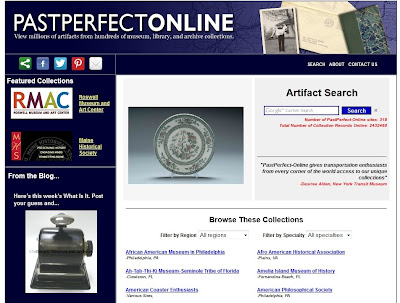 Past Perfect Online is an online searchable group of databases that features items in the archival collections of museums, libraries, universities, associations and historic homes.  You can search by geographic region, or by specialty. You may also go directly to a specific collection. The various facilities which have archival collections on Past Perfect Online can be accessed by viewing the alphabetical list underneath the phrase Browse These Collections on the home page.

The artifact search on the upper right corner of the home page is also quite helpful. Here are some types of searches that you may choose to select.

Have fun exploring this outstanding collection of databases of archival collections. You may even find some treasures that relate to your family or location. Happy hunting! 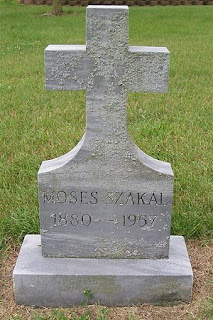 Moses Szakal was born in Hungary. In 1920, he was residing in Bay Bridge, Ohio, an unincorporated area of Margaretta Township, adjacent to Sandusky Bay. Moses was listed as one of several boarders in the Steve Hurak residence. Other persons living in the Hurak home were Mr. Hurak's wife and daughter, both named Elizabeth; an infant named Louis Orshoski, and two other men of Hungarian descent, Joseph Liptok and Ignasz Varga. The Bay Bridge Medusa cement mill employed many young immigrant men. Mr. Szakal passed away on November 23, 1957, and he was buried at the Castalia Cemetery.


Moses Szakal is pictured below in a photo of several longtime employees of the Medusa Cement plant in Bay Bridge, Ohio. He is the first man in the second row, with 38 years of service. It is estimated that this picture was taken in the early 1950's. (Click on the image for an enlarged view.) 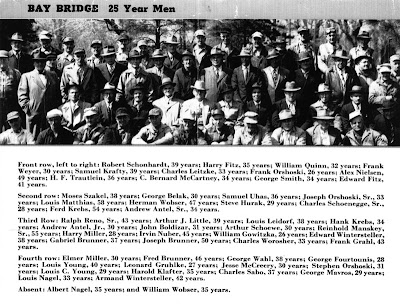 In 2005, the Erie County Historical Society placed this historical marker near the site of the Medusa Portland Cement plant, which closed in 1960. 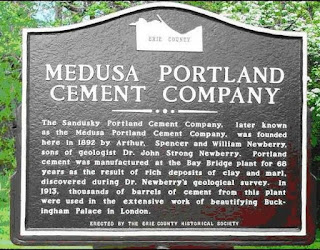 Posted by Dorene from Ohio at 4:33 AM 0 comments 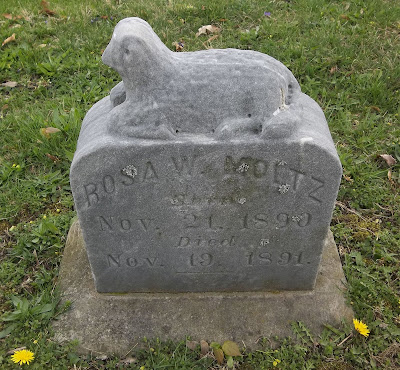 Rosa Mina Moltz was born on November 21, 1890 to August L. Moltz and the former Kate Prediger. Sadly, just before her first birthday, little Rosa Moltz passed away. She died on November 19, 1891, and she was buried at Sandusky's Oakland Cemetery. A lovely lamb sculpture honors the memory of Rosa Moltz.
Posted by Dorene from Ohio at 1:28 AM 0 comments 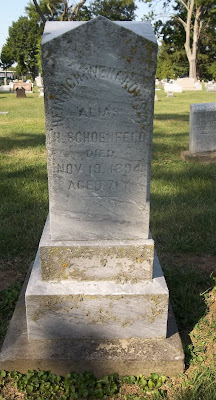 The 1880 U.S. Census listed Henry Schoenfeld, age 45, as a gunmaker who resided at the Schlenk House in downtown Sandusky. Henry stated that he was born in Alsace, and his parents had been born in Poland. After Henry Schoenfeld died on November 19, 1894, he was buried at Sandusky's Oakland Cemetery. The tombstone inscription for Henry Schoenfeld, who was also known as Heinrich Wengrowsky reads:

The tombstone inscription for Heinrich Wengrowsky/H. Schoenfeld reflects his rich diverse cultural heritage.
Posted by Dorene from Ohio at 1:16 AM 0 comments

Randy at Genea-Musings challenged us to write a story using the phrase "Grandparents are important because" in 100 words. My parents spoke so highly of their grandparents, and they were wonderful grandparents to my children as well. I only knew one set of my grandparents, but I loved them so very much! 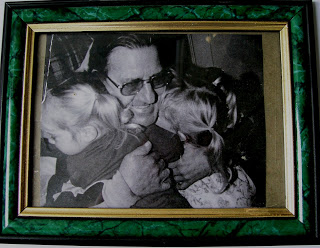 My son Joel, and several other grandchildren of my mom, Joyce Orshoski, are in the picture below, taken on Mom's last Mother's Day, in May of 2010. 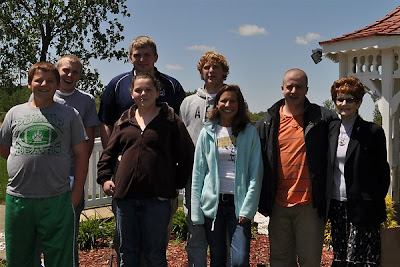 xoxoxo
Posted by Dorene from Ohio at 3:46 PM 0 comments 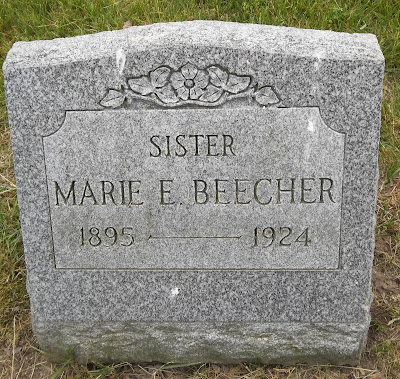 According to her death certificate, Marie Beecher was born in Sandusky, Ohio on December 7, 1896 to Jacob and Mary (Endle) Beecher. (Note: Marie's tombstone reads 1895 as her birth year.) Her occupation was stenographer at the Lake Shore Printing Company. Sadly, Marie Beecher passed away from tuberculosis at a tubercular sanatorium in Warrensville Township, Cuyahoga County, Ohio in her 27th year. Marie Beecher died on November 18, 1924, and she was buried in Sandusky's Oakland Cemetery. The facility where Marie Beecher died was later known as Sunny Acres, and eventually become a part of the MetroHealth System.
Posted by Dorene from Ohio at 1:37 AM 0 comments In the April 25, 1928 issue of the Sandusky Star Journal, is the following brief article:

Ladies' Missionary Society of St.
John's Lutheran church, Union
Corners, will meet at the home of
Mrs. Andrew Yeager. Officers for
the coming year will be elected at
this time. 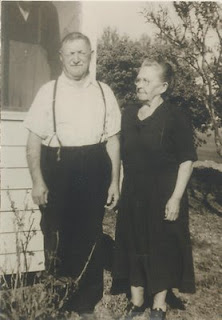 My great grandparents, Andrew and Lena Yeager were very active in the congregation of St. John's Lutheran Church, located in a rural area of Erie County, near the spot where Milan, Oxford, Huron and Perkins Townships meet, known as Union Corners.  In their later years, Grandma and Grandpa Yeager attended Zion Lutheran Church in Huron, Ohio. The Yeager children were all baptized and confirmed in the Lutheran faith, and several members of the Yeager family were buried in the Union Corners Cemetery, just off Route 250, between Sandusky and Milan.

Click here to read about the rich history of the St. John's Lutheran Church. Many of the earliest members of this congregation were German-Americans. Every time I drive by St. John's Lutheran Church, I recall spending time with Great Grandma Yeager. She was under five feet tall, and had a gentle spirit. She was wise in so many ways, and I wish I had asked her more questions about her days as a young mother.

Posted by Dorene from Ohio at 6:30 AM 0 comments 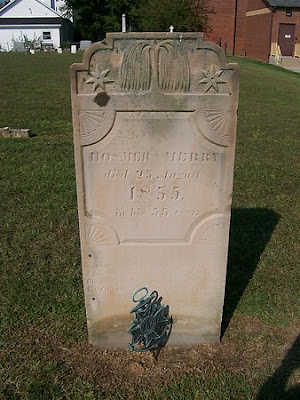 Hosmer Merry's tombstone is found in the Bloomingville Cemetery in Erie County, Ohio. Six pointed stars are found on either side of a lovely weeping willow on his grave marker. Hosmer Merry was a pioneer settler of Milan, Ohio. Below is a transcription of a tribute to Hosmer Merry, which appeared on pages 28-29 in the June 1867 issue of "The Firelands Pioneer."

Hosmer Merry was born at Kinderhook, New York, in 1783. At the age of eleven his father moved to Genesee County. At the age of 17, he with his brother Ebenezer started for the then Far West, stopping at Mentor, Lake County, Ohio, at which place there was then no town. When he was 21, he returned to Genesee County remaining about one year, at which time he returned again to Mentor.


Feb.28th, 1807, he was married to Miss Sarah Frost, who was born in Watertown, Connecticut, Oct. 28th 1787. In Dec. 1810, he came to what is now called Milan, locating on a farm one and one-half miles below the village on which he built a log house. He did not however move his family there until in Feb. 1811. There they remained most of the time, during the exciting times of 1812 & 1813, seeking refuge and protection in case of alarm in the block House at Camp Avery, which was situated some 2 miles from his farm. In 1812 he was drafted for six months. He entered his team and went as teamster, and as such was engaged in transporting supplies for the army, and was frequently at Fort Croghan. He with two or three companions started the next day after the engagement on Lake Erie, from Huron, with a boat load of provisions to go to the fleet. On arriving near the fleet, they could see the red uniform of the British about the American vessel, and were in doubt as to whether they had better go ahead or retreat, when they were hailed from the fleet. On their being assured that Commodore Perry was victorious, one of the men in the boat by the name of Harvey, an old Revolutionary hero, sprang to his feet swinging has hat and calling on his comrades to “Row boys, for God sake row.” They were the first to board the fleet after the engagement. 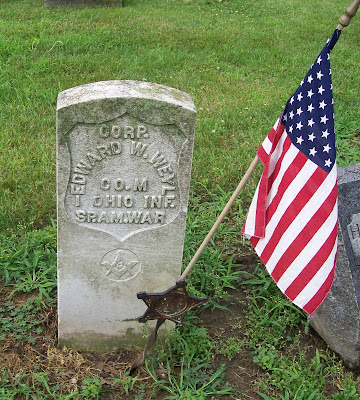 Edward W. Weyl was the son of Sandusky residents Mr. and Mrs. Philip Weyl. He served as a Corporal in Co. M of of the 1st Ohio Infantry during World War One. Records at Ancestry Library Edition indicate that as a result of injuries during the war, Edward Weyl was admitted to the U.S. National Homes for Disabled Volunteer Soldiers in Dayton in 1925. Edward W. Weyl passed away at the Soldiers Home in Dayton on December 18, 1927. He was buried at Oakland Cemetery.

At the time of his death, Edward Weyl was survived by three sisters-in-law, Mrs. Nettie Weyl and Mrs. Mary Weyl of Sandusky, and Mrs. M.N. Weyl of DeSoto, Missouri. An obituary for Edward W. Weyl is found in the 1927 OBITUARY NOTEBOOK at the Sandusky Library.
Posted by Dorene from Ohio at 4:23 AM 0 comments

Links to this post
Email ThisBlogThis!Share to TwitterShare to FacebookShare to Pinterest
Labels: Weyl, World War One 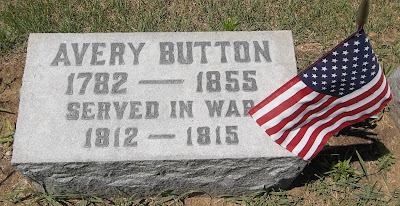 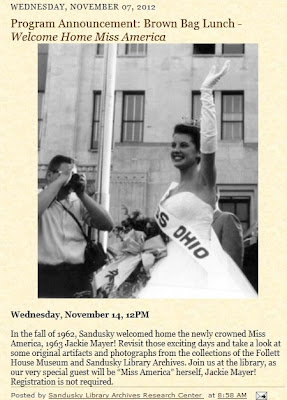 On Wednesday, November 14, 2012, at Noon, a program will be held at the Sandusky Library entitled "Welcome Home Miss America." Miss Jackie Mayer was "Miss America" in 1963. Featured will be original objects and photographs about Miss America from the collections of the Follett House Museum and the Sandusky Library Archives Research Center. Jackie Mayer herself will be in attendance, and no registration is required. If you live close enough to Sandusky to attend this program, it is sure to be a delightful event!

Many Thanks for Your Words of Encouragement

Thank you to the Genealogy Blogging community for the prayers, kind words, and good thoughts you have been sending to me and my family as we try to cope with the sudden loss of our son Joel. As genealogists, we value family so very much, and I appreciate your kindnesses immensely. 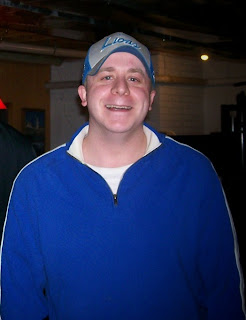 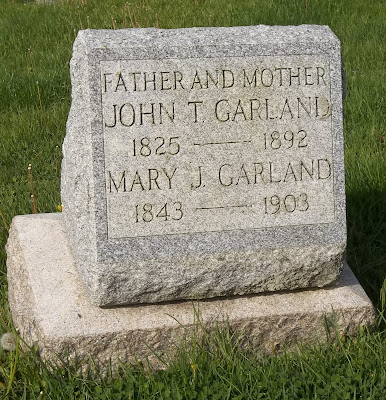 John T. Garland was born in England in 1825, and his wife, the former Mary Quick, was born in England in 1843. The couple resided in Sandusky, Erie County, Ohio, in 1880, with their children, also named Mary and John Garland. By 1892, John T. and Mary Garland had moved to Detroit, Michigan. Mr. John T. Garland died in Detroit on November 4, 1892. The following obituary appeared in the Sandusky Register on November 7, 1892:

The funeral of the late John T. Garland, of Detroit, a former resident of this city, was largely attended yesterday at the residence of Mr. E.S. Cooper, 125 Monroe Street, a fitting token of respect in which he was held in this community as well as by the Congregational church, of which he had been a consistent member for many years. The services at the home and at the cemetery were conducted by his pastor, Rev. R.R. Davies, who in a short and fitting manner told the story of the pure and Godly life just ended. The floral offerings were tokens of love from friends and relatives. The pall bearers were representatives of the church, the Y.M.C.A. and the Sandusky Tool Company, of which he had been a faithful employee. They were F.E. Davis and J.M. Farrar from the church, President C.A. Judson and Secretary C.T. Otdroyd of the Y.M.C.A. and George A. Church and H.H. West of the tool company. The selections from gospel songs were among those he loved and many voices joined in singing the. Mr. Chas. J. Krupp had the funeral under his direction.

Burial was at Sandusky's Oakland Cemetery. Mrs. Mary Garland passed away at the residence of her daughter in Detroit on October 29, 1903. Mrs. Garland was buried beside her husband at Oakland Cemetery.
Posted by Dorene from Ohio at 1:13 AM 0 comments