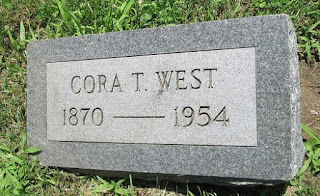 Cora Textor was born in Sandusky, Ohio in 1870. Her father Albert Textor owned a jewelry store in Sandusky. Cora did not marry until she was forty years of age. In the summer of 1909, Cora Textor married William G. West at his ranch in Petersburg, Virginia. An article  in the Sandusky Star Journal of January 23, 1935 stated that Cora had spent the summer of 1909 on a trip to Europe, and she married Mr. West shortly after her return. William G. West was the son of William T. West and Lydia Mahala (Todd) West, who were prominent Sandusky residents.  Cora and William were the parents of one son, William Textor West, who was born in 1910. William G. West died in April, 1913, at his home in Virginia. In 1915, Cora Textor West was issued a patent for a baby dresser. Below is a drawing from patent number 1,127,139. 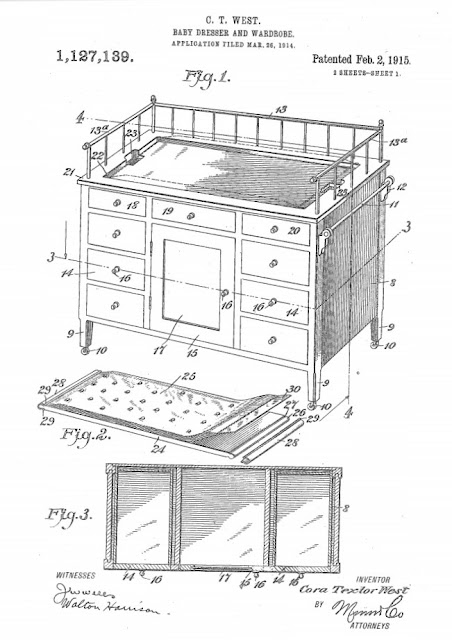 By the 1930s, Cora had moved to Hollywood, California, where she resided with her sister, Amanda Textor Moore. Cora Textor West died in California in August of 1954. Her remains were returned to Sandusky, Ohio, and she was buried in the West family lot at Oakland Cemetery.
Posted by Dorene from Ohio at 1:30 AM 0 comments

Declaration of Intention of Joseph Orsocski/Orshoski 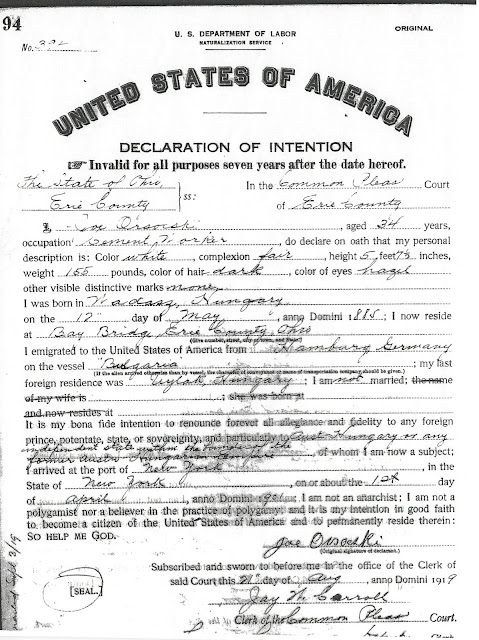 My great grandfather Joseph Orsocski/Orshoski filled out this Declaration of Intention at the Clerk of Common Pleas Court in Erie County, Ohio on August 21, 1919. This was not long after his first wife Julia had died, leaving him a widower with six sons. (Later he would marry another young lady of Hungarian descent, also named Julia.) 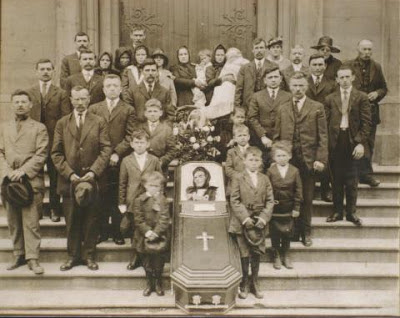 On this document, Great Grandpa Joe stated that he was a cement worker, residing in Bay Bridge, Ohio. He said that he was born in Vadasz, Hungary in 1885. Later I would learn that he had been baptized in Felsovadasz, Hungary. For some time, I was looking for Vadasz, but Grandpa Joe must have just written down a shortened form of the town of his birth. He stated that he was 5 feet 7 1/2 inches tall, with dark hair, a fair complexion, hazel eyes, and he weighed 155 pounds. He emigrated from Hamburg, Germany on the vessel "Bulgaria" or or about the first day of April, 1901. He stated that he was not an anarchist or a polygamist, and he renounced his allegiance and fidelity to any foreign sovereignty. Great Grandpa Joseph Orshoski was a hard worker, and had a somewhat serious outlook on life, at least in my opinion. I so wish that I asked him more questions about his early life back in Hungary and in the days when his children were young.
Posted by Dorene from Ohio at 1:30 AM 0 comments 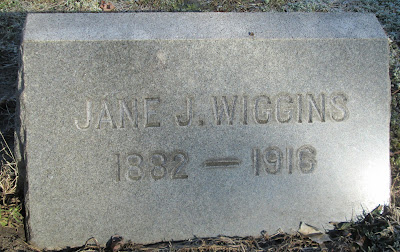 According to her death record, Jane J. Wiggins was born on October 28, 1882 to Alva and Fannie (Davlin) St. John. In the 1910, U.S. Census, Jane was in her twenties, and resided with her parents, and her two younger brothers in Perkins Township, Erie County, Ohio. On October 15, 1915, Jennie J. St. John married Roy Wiggins. Rev. H.A. McClellan of Calvary Church officiated at the wedding. 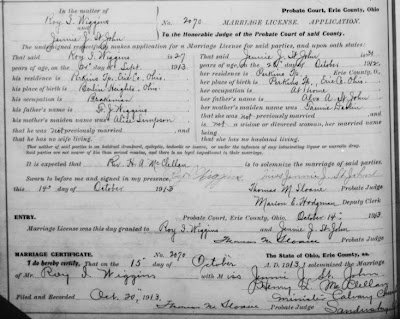 Sadly, Jane "Jennie" St. John Wiggins passed away at the age of 33, of pulmonary tuberculosis on August 11, 1916.  She was survived by her husband, two young daughters, her parents, a sister, and two brothers. Funeral services were held for Mrs. Jane Wiggins at the home of her parents, with Rev. E.G. Mapes officiating. Burial was at Oakland Cemetery. An obituary for Mrs. Wiggins appeared in the August 11, 1916 issue of the Sandusky Star Journal.
Posted by Dorene from Ohio at 1:12 AM 0 comments 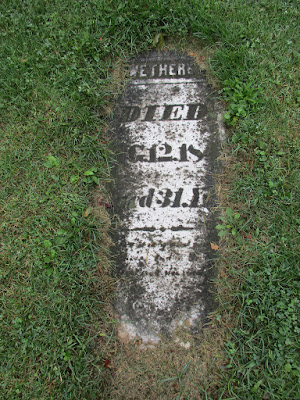 Franklin W. Wetherell died August 12, 1849 at the age of 31, during the Cholera Epidemic. His wife Celina had succumbed to cholera just two weeks prior to Mr. Wetherell's death. Both Mr and Mrs F W Wetherell were buried in the family lot at Oakland Cemetery.

Mrs. Rosamond Ward McGee was the wife the Thomas C. McGee. She died on August 8, 1877, and she was buried at Sandusky's Oakland Cemetery. In volume 4 of the Firelands Pioneer, her husband wrote a touching obituary, with tells us many details about the life of Rosamond McGee. A transcription is below.


Mrs. Rosamond Ward McGee
Sketch of her Life by Capt. T. C. McGee, of Sandusky, Ohio
Died, in Sandusky, August 8th, 1877, Mrs. Rosamond Ward McGee, wife of T. C. McGee, in the 61th year of her life. She was born  in Saratoga County, New York, on the 21st day of March, 1813, the second child of her parents, John and Rosamond Whitford Ward. Her mother died when the child was eight days old. She was taken to the home of her grandparents, John Ward, Sr. (This home was but five miles from the now famous battle fields of Saratoga. This same grandfather having been' a soldier and took a part on this well fought field.) Here in this humble but kindly home she remained until she was eleven. Her father having again married and removed to the village of Fort Ann, Washington County, Rosamond went to live with him. Here she grew up to young womanhood, having the usual school advantages of a New York state rural village, and when past her nineteenth birthday, a rambling Ohio lad who was visiting the adjoining town in which she was living, espied her red cheeks and raven hair, sat down and persuaded her to come to Ohio. (And this persuasion - succeeded in spite of the dreadful stories then rife about that always dangerous Lake Erie.) On the 25th of September, 1832, she was married and after a few weeks visit among friends at Saratoga, came to Schenectady, taking a fine new line boat, arrived at Buffalo on the seventh day. On coming in sight of the lake, all her former fears were so strongly revived that she had liked to have fainted, but as others did not seem to think there was any danger she gathered courage. We took the steam boat "Niagara," Capt. C. C. Stanard, and in two days were landed in Sandusky after a very fine, calm passage. In years afterward she went many voyages with her husband on sail vessels and often met some sharp gales, but she had learned that the Lord is to be trusted just as much on the waters as on the land. She resided at Sandusky continuously (with many pleasant visits to her old home) until her death, always fulfilling all the duties of wife, friend and neighbor. Some dark clouds passed over her domestic life, but the dark tints were none of her making. After weeks of illness she died as she had lived, a Christian; leaving a mourning husband and friends. 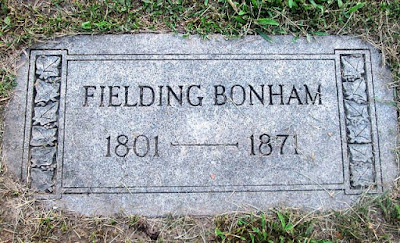 Fielding Bonham's tombstone is located at Oakland Cemetery in Sandusky, Ohio. He was born 1801, and he died in 1871. So far, I have not located this name, after searching in a number of genealogical databases and city directories. If anyone has a connection with Fielding Bonham, please let me know! The tombstone is majestic. I am not sure how he ended up being buried in Sandusky, Ohio.