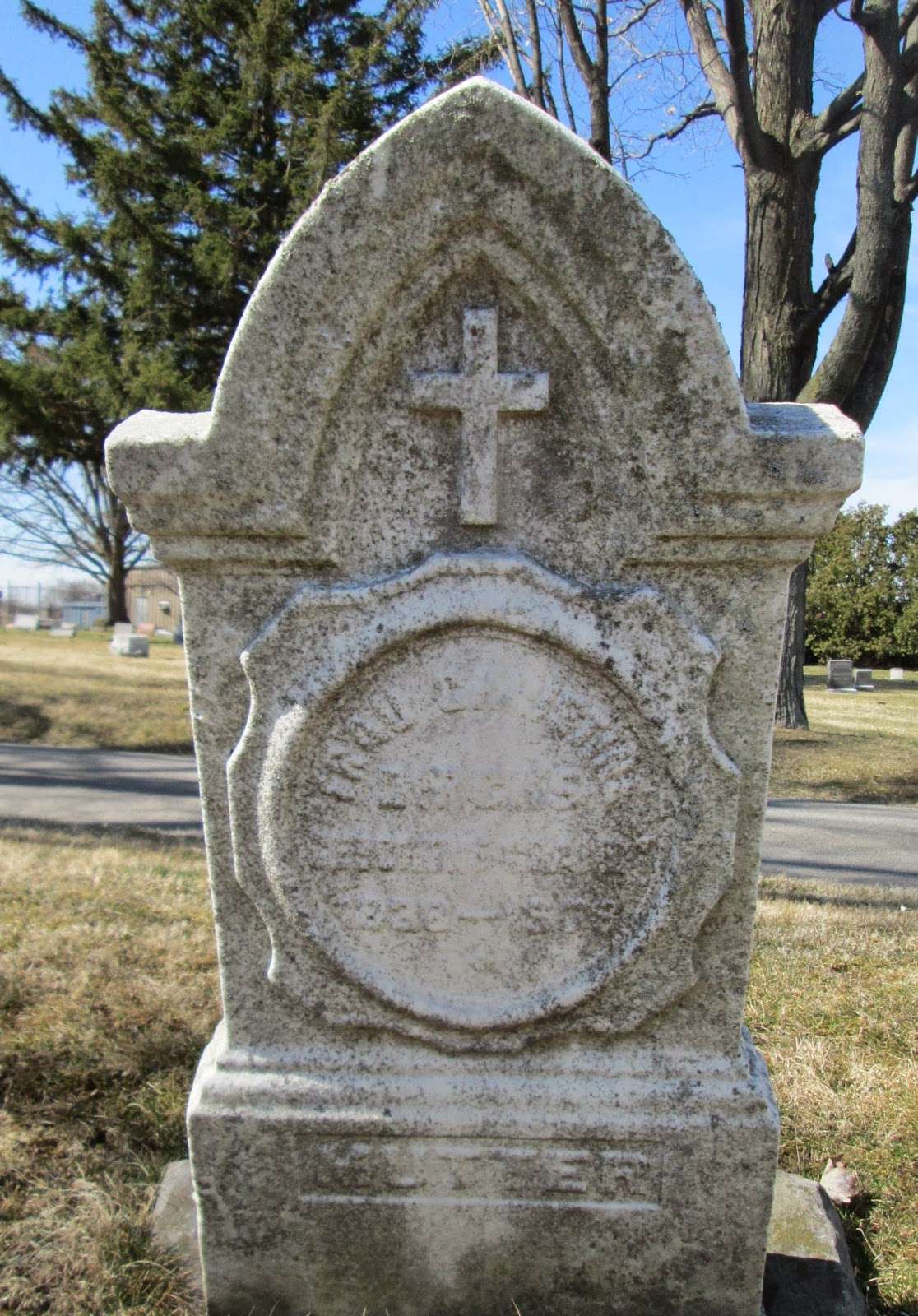 According to the 1900 U.S. Census, Christina Dircks (sometimes spelled Dirks) was born in Germany in April of 1838. At that time, she residing in Sandusky's 10th Ward, with her husband Carl, and children, John and Rosa, all who also natives of Germany. Each of the members of the Dircks family stated that they had come to the U.S. in the year 1891. Mrs. Christina Dircks passed away on January 11, 1908, at the age of 69 years, 8 months, and 28 days. She was survived by her husband, two daughters, four sons, an adopted son and daughter, and several grandchildren. Funeral services for Christina Dircks were held at both the family residence and at Zion Lutheran Church, with Rev. Stellhorn officiating. Burial was at Sandusky's Oakland Cemetery. A cross adorns the top of Christina's tombstone, and the German word for Mother,
Mutter, is found at the base of her tombstone. An obituary for Christina Dircks/Dirks appeared in the January 11, 1908 issue of the Sandusky Star Journal.
Posted by Dorene from Ohio at 1:30 AM 0 comments

We Will Miss You Aunt Hazel! 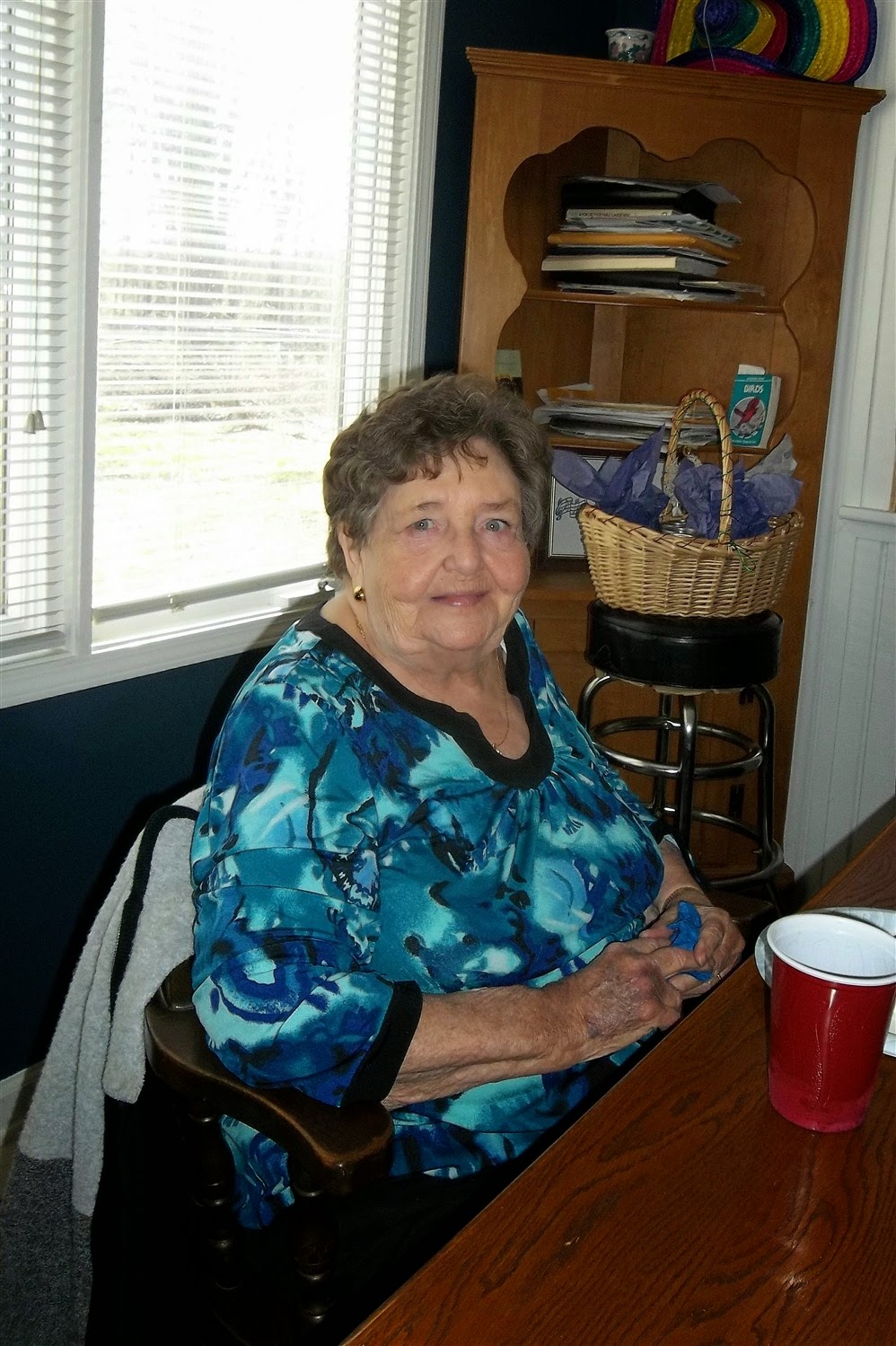 My children's Great Aunt Hazel Paul passed away on January 18, 2015 in New Port Richey, Florida. Aunt Hazel had a full life filled with ups and downs, and many joys and sorrows. I remember having many long talks with her in her later years. Click here to read the obituary of Hazel Paul from the Sims Funeral Home in Douglas, Georgia. We will surely miss you Aunt Hazel!
Posted by Dorene from Ohio at 12:35 PM 0 comments 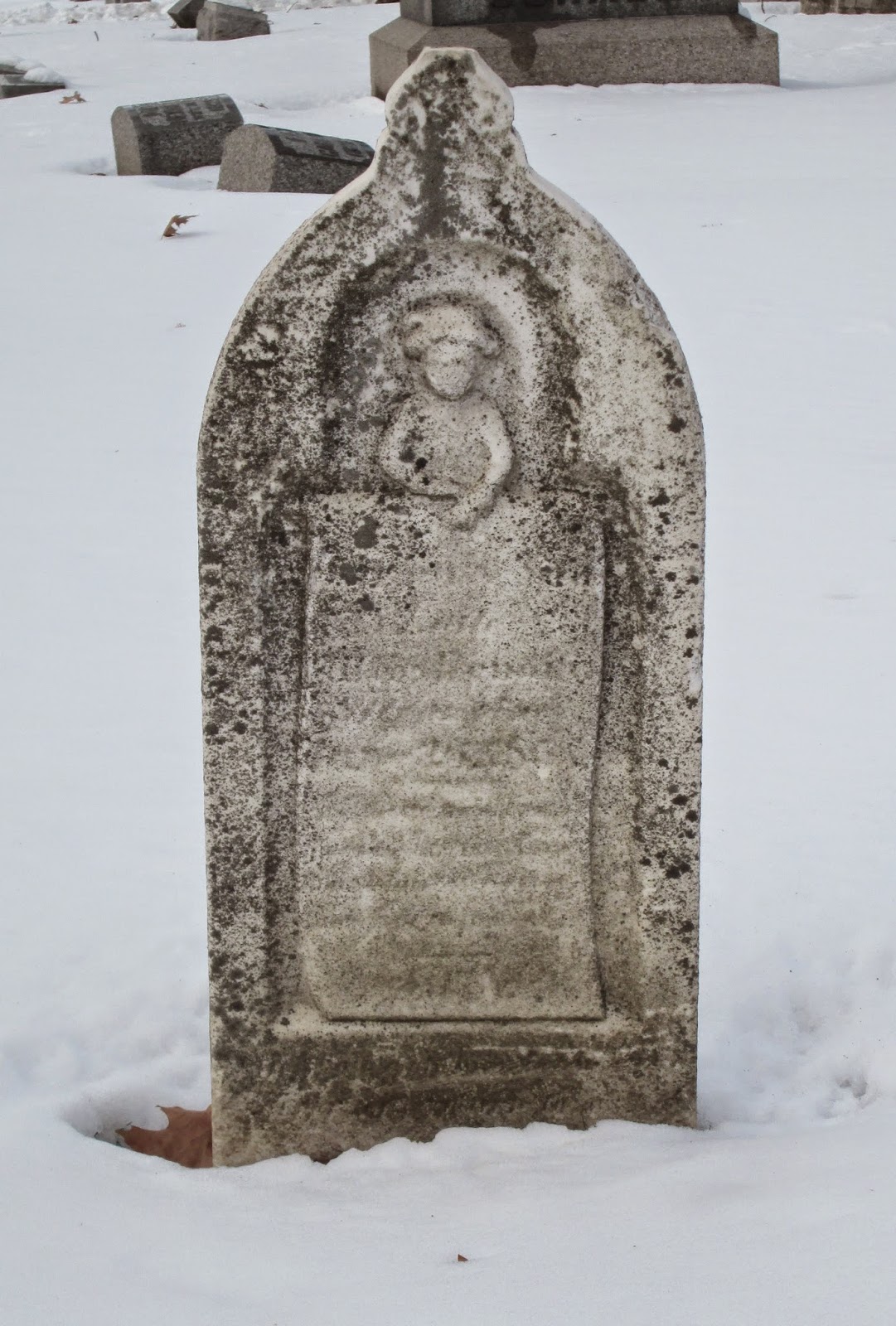 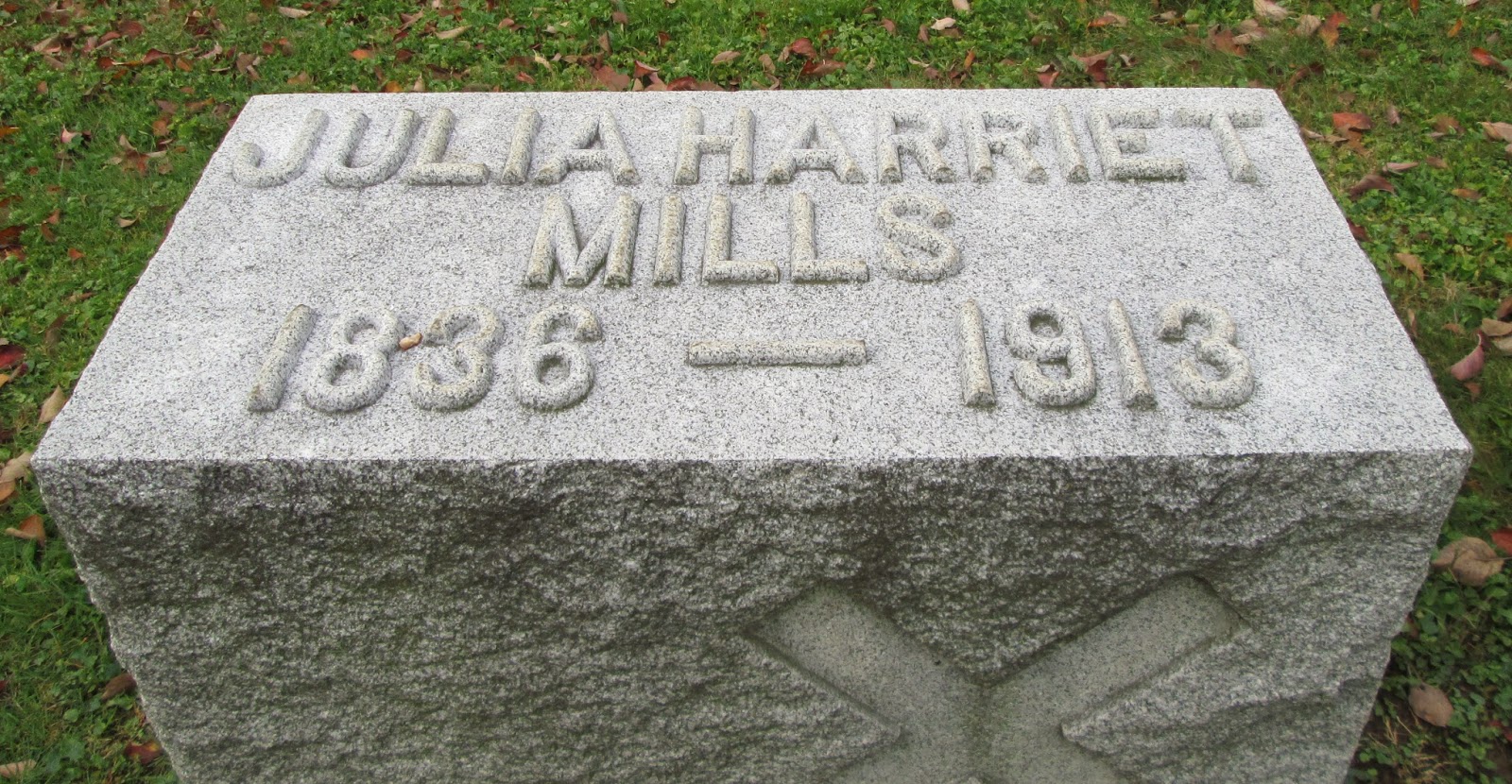 Mrs. Julia Harriet (Moss) Mills, 1836-1913, was the wife of Wildman Mills, 1831-1894. A lovely biographical sketch of Julia is found on page 183 of the book PORTRAIT AND BIOGRAPHICAL ALBUM OF SANILAC COUNTY, (Chapman Brothers, 1884). A transcription of this sketch is found below:

Mrs. Julia H. (Moss) Mills was born Oct 2, 1836, at West Burlington, Otsego Co., N. Y. She is the daughter and only surviving child of Truman Moss and was married to Wildman Mills in the village where she was born, Dec. 27, 1858. Five children constitute the issue of this union, three of whom are deceased. They were born in the following order: Elizabeth Moss was born Sept. 28, 1861; Truman Moss was born July 2, 1866, and died Nov. 7 of the same year; Isaac Augustus, born Oct. 4, 1867, died Feb. 10, 1869; Wildman Ambler was born July 2, 1872, and died on the first day of September following; Julia Harriet was born Nov. 7, 1866. The daughters survive. The same fatality which deprived Truman Moss of his sons seems to have pursued the male children of his daughter, all of them dying in infancy.

Mrs. Mills is the lady Bountiful of Croswell. She has been a partaker and sharer in all the joys and griefs of its people. She has rejoiced in their well being and prosperity, and has sorrowed with them when affliction has laid upon them its merciless rod. She has been ever ready with her resources of kindness, of sympathy, of counsel, to aid as occasion has required. The sick and dying have been the grateful recipients of her sympathetic ministrations, and she has guided all her social relations with a solicitude and judgment which has created for her an influence that cannot be portrayed with words. It is best understood in the regrets which her absence from Croswell creates, and in the warmth of the welcome which greets her return. 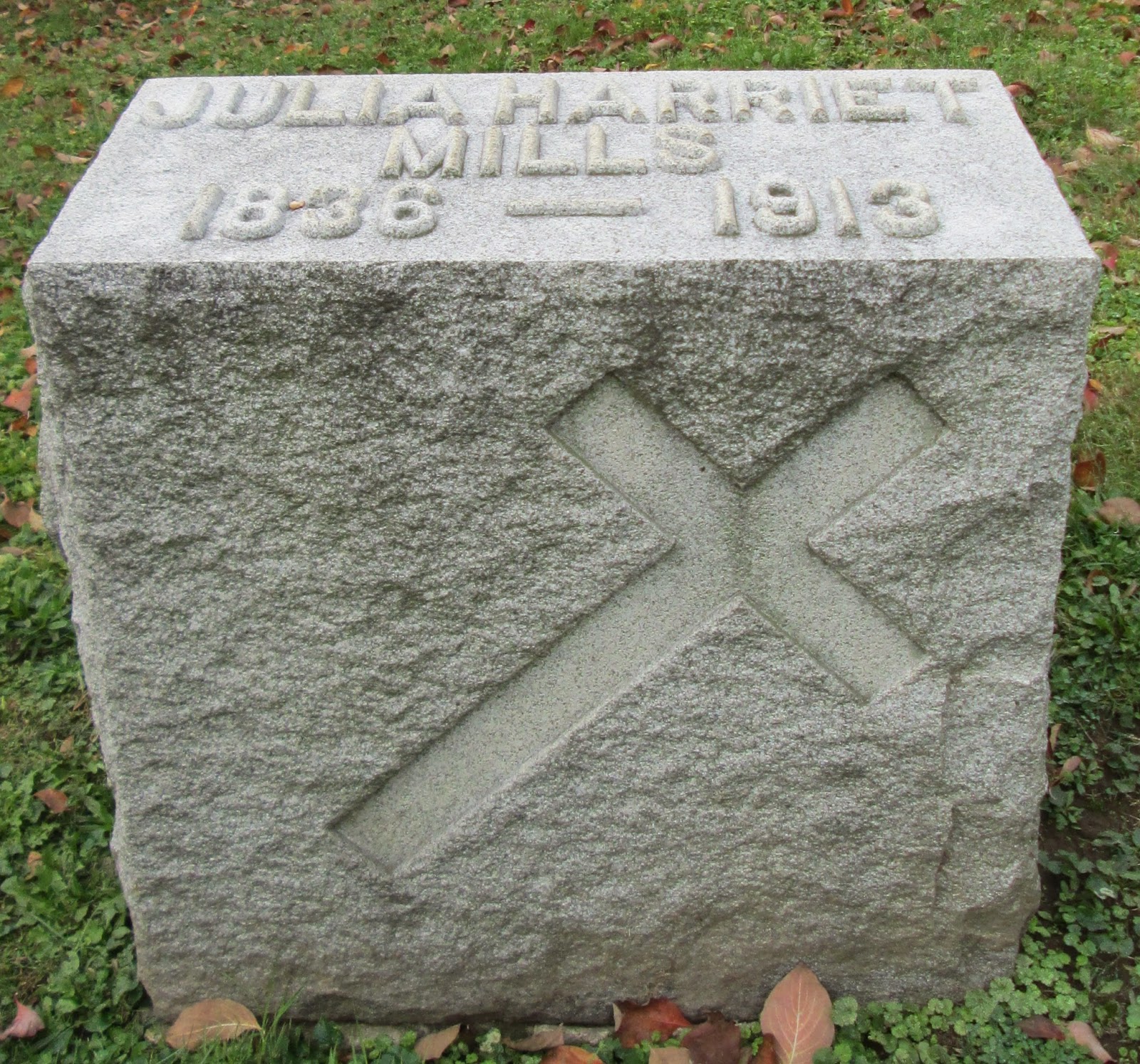 A simple cross adorns the front of the tombstone of Julia Harriet Mills. 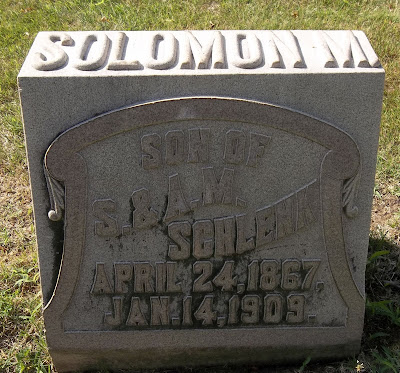 Posted by Dorene from Ohio at 1:35 AM 0 comments

Email ThisBlogThis!Share to TwitterShare to FacebookShare to Pinterest
Labels: Schlenk 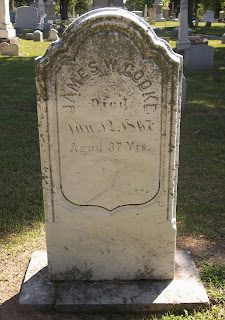 Posted by Dorene from Ohio at 1:40 AM 0 comments 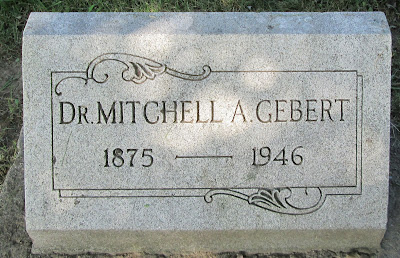 Mitchell Alford Gebert was born on September 16, 1875 in Plymouth, Ohio. His parents were Gottfried Gebert and Anna Mary (Snook) Gebert, both natives of Germany. Mitchell A. Gebert became a dentist, and he operated a dental practice in Huron, Ohio for many years. According to the Sandusky Star Journal of November 24, 1926, he married Alma Bausch  (nee Kerber) of Sandusky, Ohio. On May 8, 1946, Dr. Gebert died following a cerebral embolism. He was buried at Sandusky's Oakland Cemetery.

Posted by Dorene from Ohio at 8:32 AM 0 comments 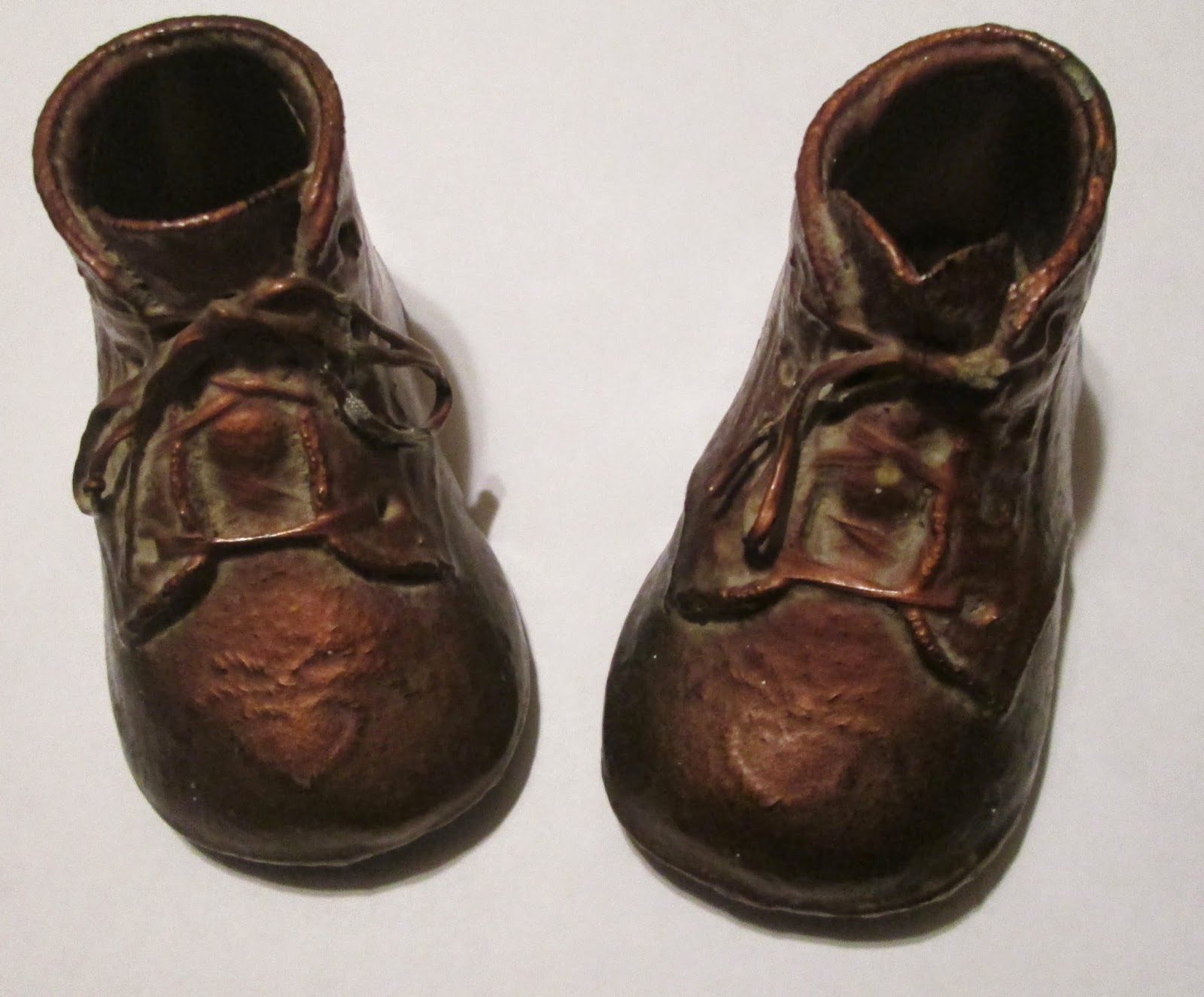 After I grew out of my first baby shoes, my mother had them bronzed. I recall that they originally were attached to a picture frame, but the frame did not survive. One shoe had my first name inscribed on it. 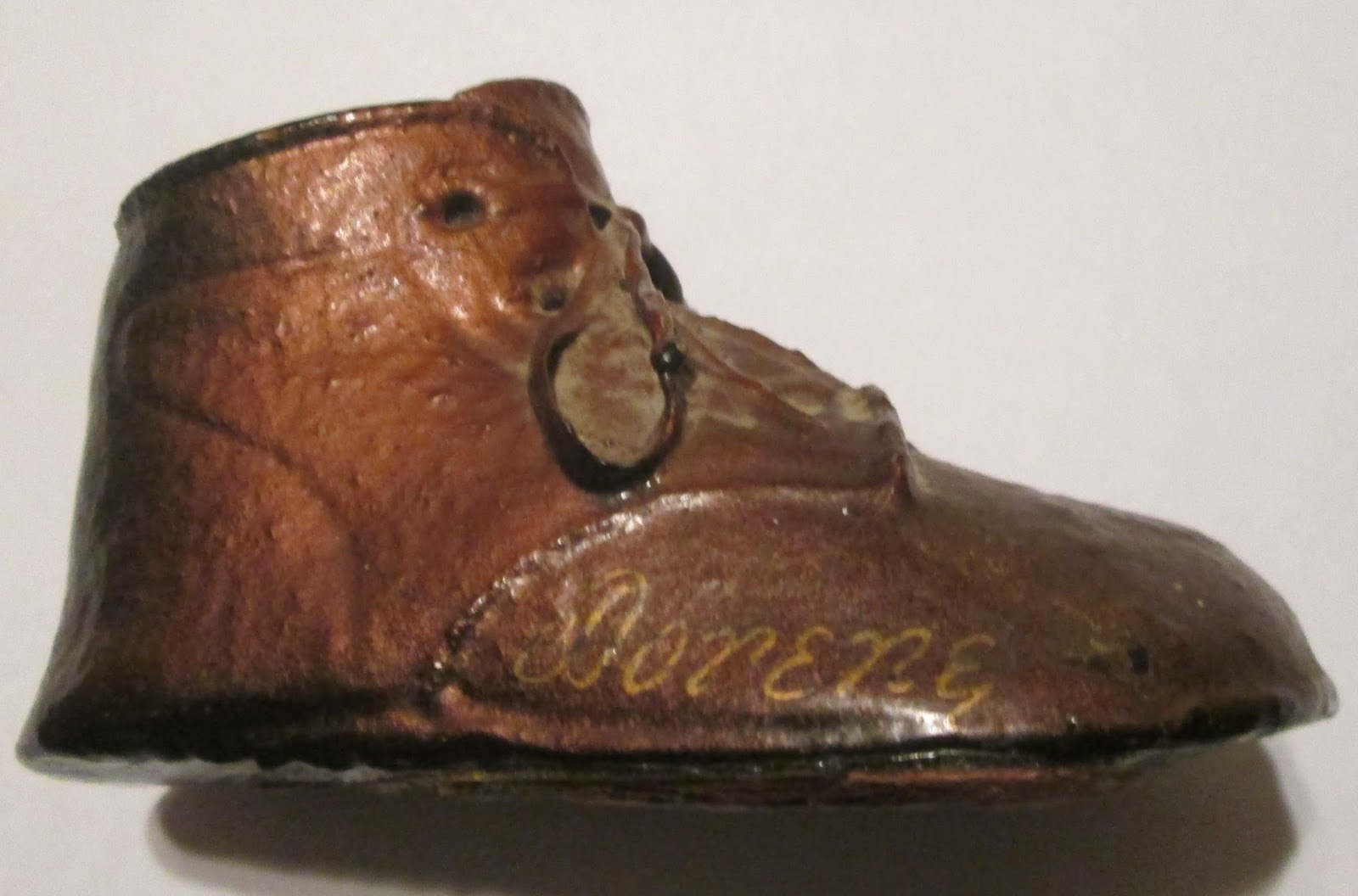 On the other shoe was my date of birth. 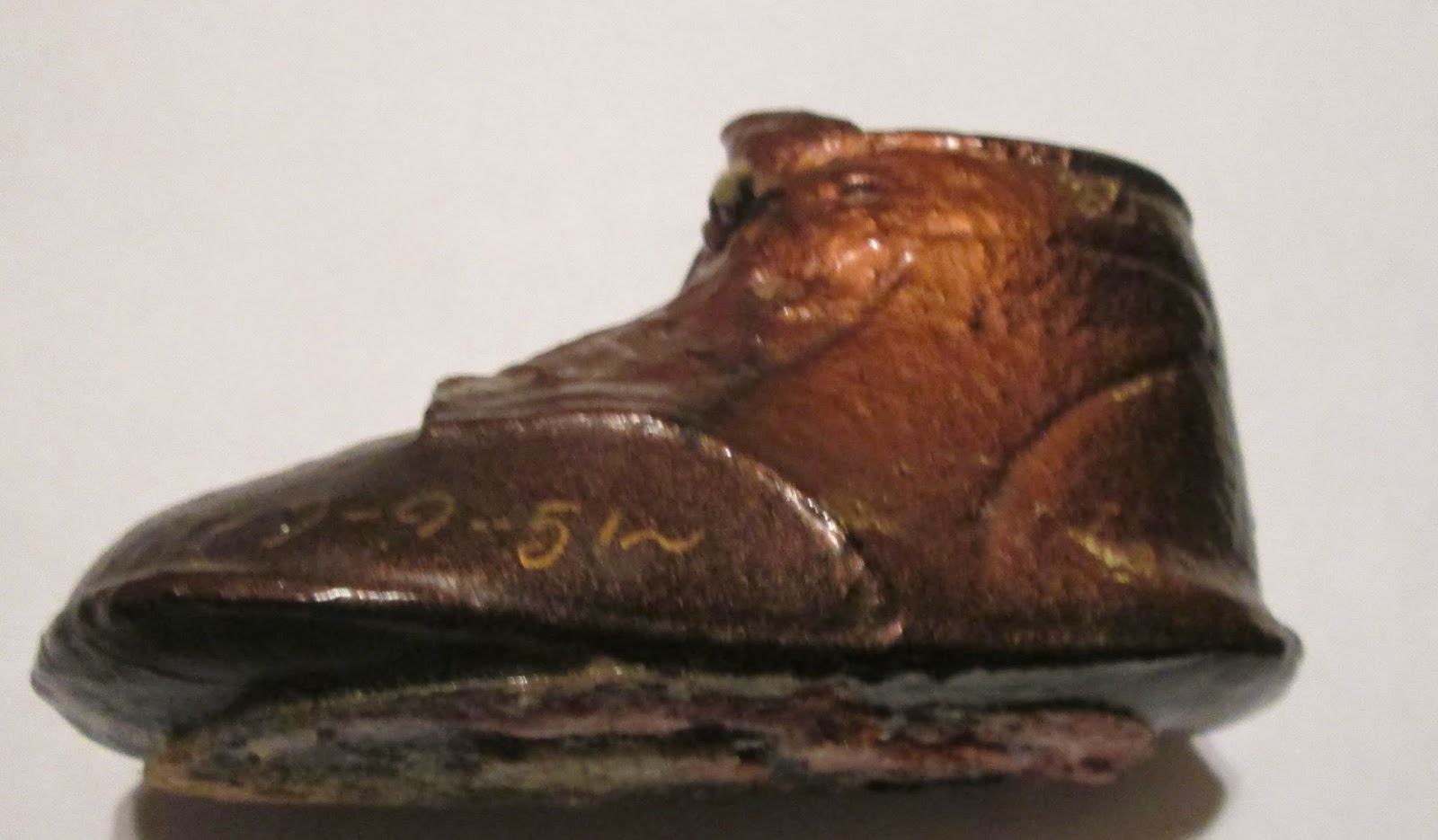 Well over fifty years old, these poor old shoes are quite worn and dusty, but I appreciate my parents' sentiment in preserving them! My mother was very sentimental, and she kept special cards, school projects, and decades of photograph albums. Our family's heritage is richer because Mom was such a "keeper." Thanks Mom!

Below is a picture of me and my parents from 1952. From that year forward, for many years, Mom had a family photo taken for our annual Christmas cards. 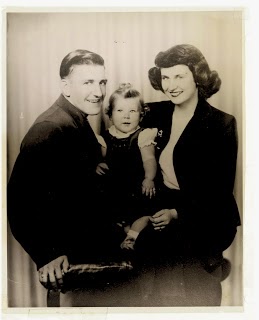 Treasure Chest Thursday: Treasure Maps in the Library of Congress 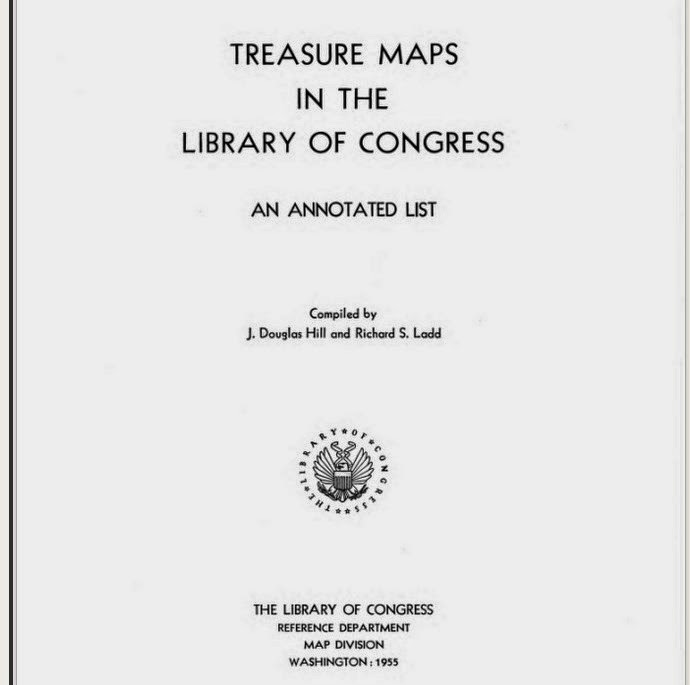 Above is the title page to a resource entitled: TREASURE MAPS IN THE LIBRARY OF CONGRESS: AN ANNOTATED LIST. One of the individuals who compiled this list was my second cousin twice removed, J. Douglas Hill. This item is available full-text online at the Haiti Trust. James Douglas Hill was the son of Dr. Lyle Steen Hill and his wife, the former Helen Wilson. The treasure maps listed include a variety of sunken vessels, many which were thought to contain treasures.

How I wish I could have gotten to know J. Douglas Hill! I have worked in libraries for over thirty years, and I would love to have asked him questions about his experiences as a long time employee of the Library of Congress!

According to his death certificate, James Douglas Hill was born on May 31, 1915, and he died in Reston, Virginia on November 15, 1993. His occupation was listed as retired map processor for the Library of Congress. James Douglas Hill was buried at Arlington National Cemetery in Court 3, Section HH, Column 13, and Niche 4. His burial record at Arlington National Cemetery indicates that he served as a Lieutenant in the U.S. Navy. Thanks my distant cousin for your contributions to the annotated list of Treasure Maps in the Library of Congress!

Posted by Dorene from Ohio at 1:00 AM 0 comments