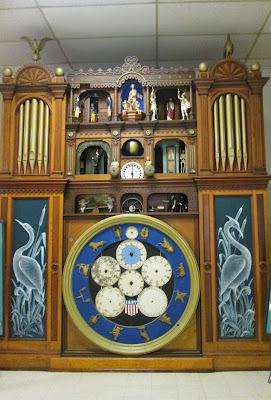 Though it is no longer operating, Frank Steinle's Automatic Wonder Clock is now on display at the Town Hall Museum at Cedar Point. Frank Steinle was a native of Germany who settled in Sandusky. It took him twenty five years to build this amazing clock. According to a post at the Sandusky History website, there were five themes on the clock: the races of man, the four periods of life, angels, patriotism and religion. Read more about this clock at Sandusky History. The workmanship on this clock is outstanding. 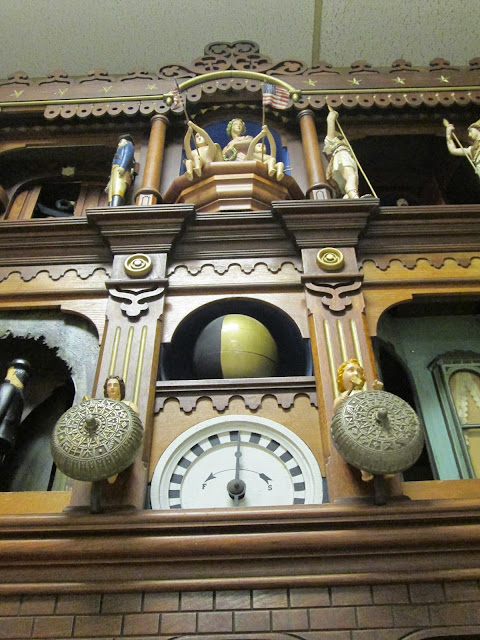 If you find yourself at Cedar Point, and you're not a big fan of coasters, at the Town Hall Museum you can see many historical photographs and artifacts, which chronicle the history of the amusement park that has meant so much to our area for well over one hundred years! 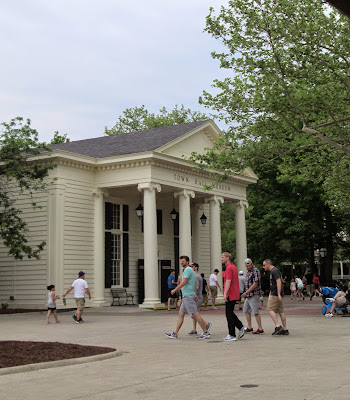 Posted by Dorene from Ohio at 1:30 AM 3 comments 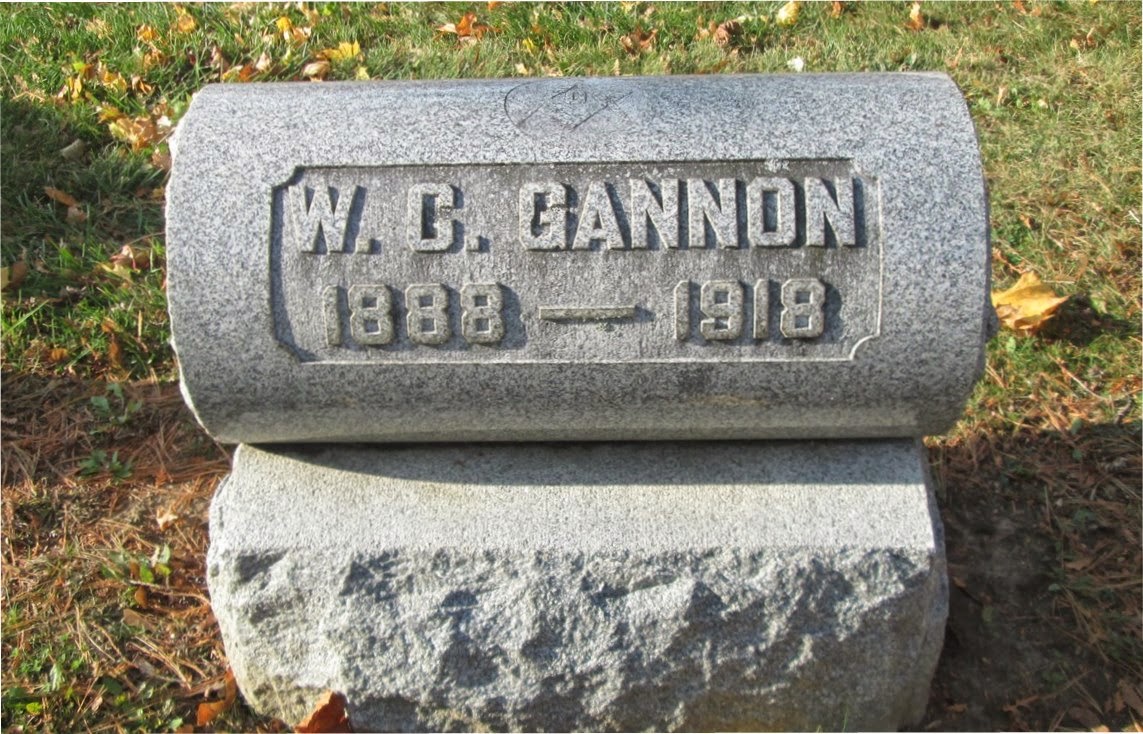 According to the Official Roster of Ohio Soldiers, Sailors and Marines, World War, 1917-18, William C. Gannon was born in Chicago, Illinois in 1888. At the time of his enlistment into military service, William was residing in Lorain County, Ohio. Sadly William C. Gannon died from disease when he was stationed at Fort Oglethorpe, Georgia in May of 1918.W.C. Gannon was laid to rest at Sandusky's Oakland Cemetery.
Posted by Dorene from Ohio at 1:30 AM 0 comments 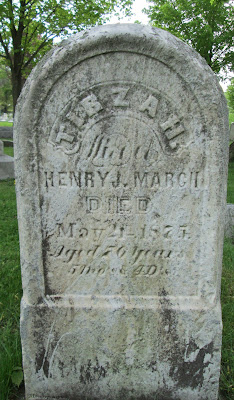 According to U.S. Census records, Tirzah March was born in Maine. In 1850 she was age 51, and resided in Highland County, Ohio with her husband Henry J. March. There were several March children in the household, ranging in age from 11 to 25, as well as a 16 year old named Ann E. McNary. In 1860, Henry and Tirzah March were still in Highland County, along with Westly March, age 21 and Tirzah Hart, age 14. Henry J. March died on Christmas Day in 1860, and he was buried in Highland County. By 1870, Tirzah March had moved to the first ward of the city of Sandusky. She was living with the J.L. Lewis family at that time. The May 22, 1875 issue of the Sandusky Register reported that Mrs. Tirzah March had died on May 21, 1875 in the seventy-seventh year. Funeral services were held at the Methodist Episcopal Church, and burial was in Oakland Cemetery. The name "Tirzah" comes from the Hebrew language and means "she is my delight." 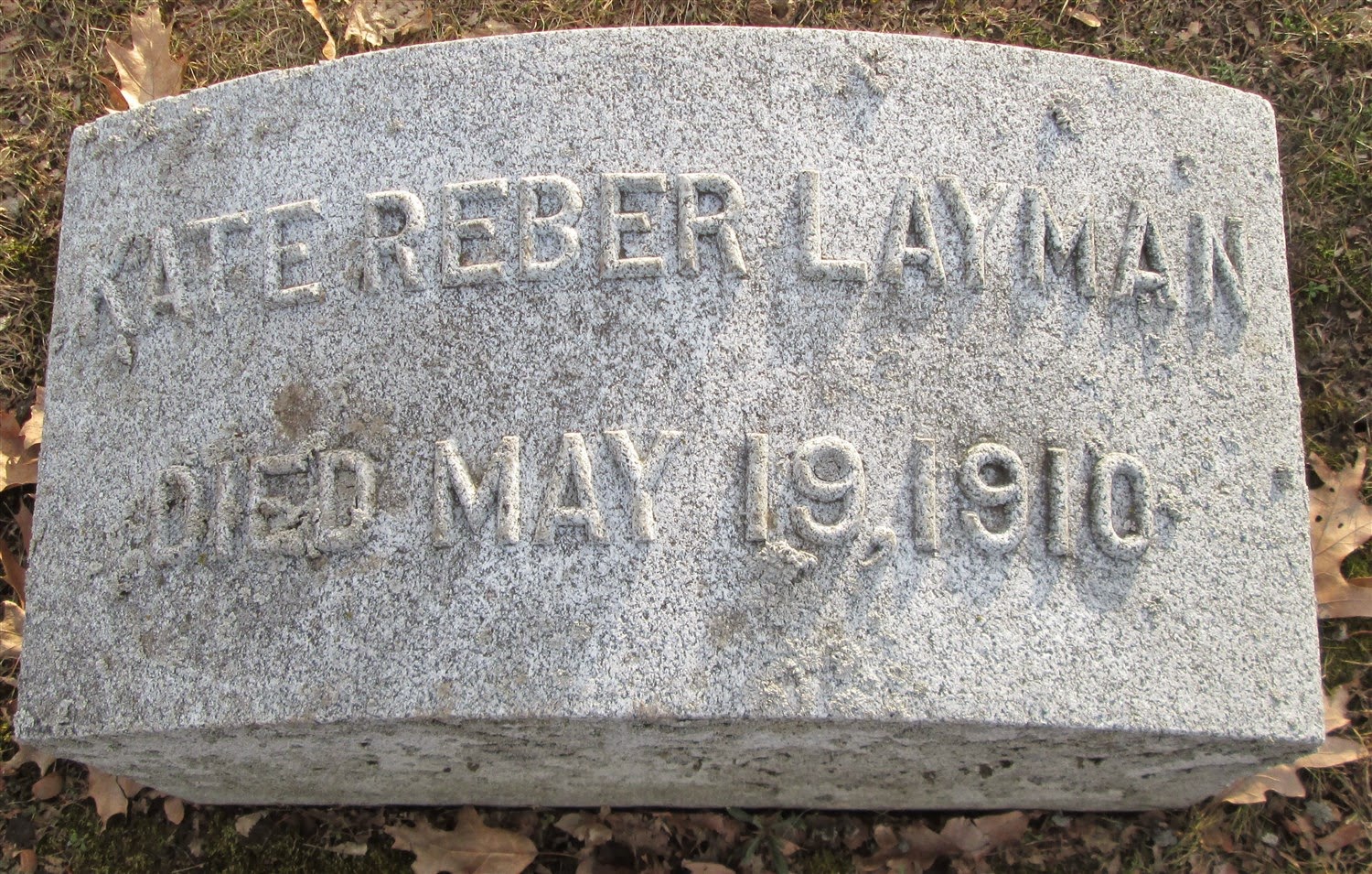 Kate Reber was the daughter of prominent Sandusky attorney George Reber, and his second wife, the former Nancy Stiles. On December 2, 1880, Kate Reber married Frank A. Layman in Erie County, Ohio. F.A. Layman was the editor of the Sandusky Star Journal for a time. 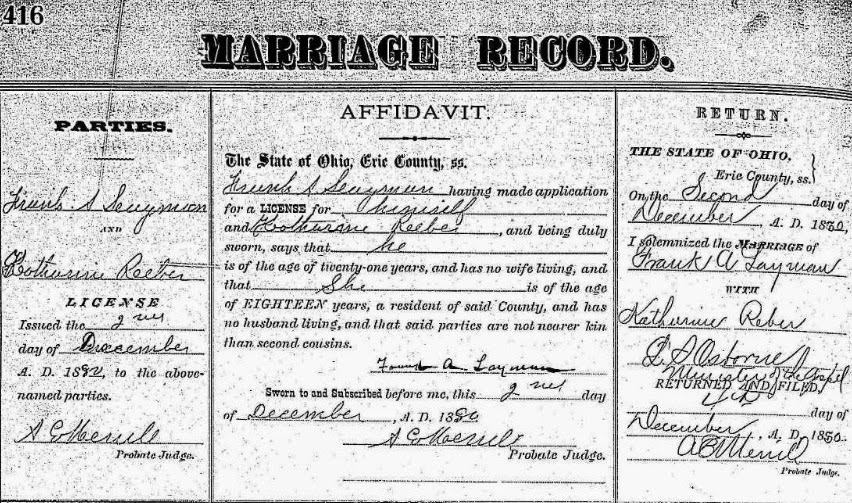 On May 19, 1910, Mrs. Kate Reber Layman died at the age of 45, in Pittsburgh, Pennsylvania. Her remains were returned to Sandusky for burial at Sandusky's Oakland Cemetery. 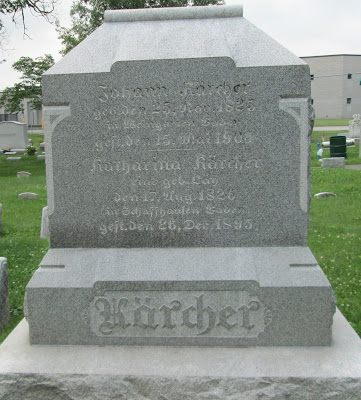 According to the book SANDUSKY EINST UND JETZT, by Ernst Von Schulenburg, Johann Kärcher was born in Weingarten, Baden, German in 1825. He settled in Sandusky, Ohio in 1846, and he married Katharina Lay in 1850. A marriage record on file at Erie County Probate Court listed Johann's name as John Carrier.

In McKelvey's 1867 Sandusky City Directory, Johann Kärcher's name is listed as John Kercher. In 1867, he resided at 15 Jefferson Street, and his occupation was engineer. For several years Johann Kärcher worked as a marine engineer on the steamer Louise.  Katharina Lay Kärcher died on December 26, 1895. The inscription on her tombstone indicated that she was born in Schaffhausen, Baden, Germany on August 17, 1826.

An article in the May 16, 1904 issue of the Sandusky Evening Star,  reported that Johann Kärcher had taken his own life by consuming carbolic acid. It is believed that he had become increasingly despondent after his wife's death. Mr. Kärcher had resided with his wife's nephew John Lay, for several years, but for a few months he lived at the Odd Fellows Home in Springfield, Ohio. Mr. Kärcher spent the last few days of his life at the Kunzmann Hotel in Sandusky. Otto Kunzmann discovered the lifeless body of Johann Kärcher when there was no answer at the door to his hotel room. Funeral services for Johann Kärcher were held at Krupp's mortuary, under the auspices of the Odd Fellows. Burial was at Oakland Cemetery. Johann Kärcher's date of death was May 15, 1904. The majestic monument which honors the memory of Johann and Katharina Kärcher is found in the North Ridge section of Oakland. Katharina Kärcher was the sister of Jacob Lay, who died in the 1849 cholera epidemic. Jacob's three sons went on to establish the Lay Brothers Fisheries.

The Four Young Daughters of Mr. and Mrs. Carl Warnke

In Block 62 at Oakland Cemetery is a four sided monument which honors the memory of four young daughters of Carl/Charles Warnke and his wife, the former Elizabeth Steitz. Elmira Warnke was born in 1859, and died in 1861. 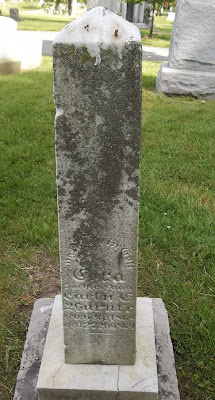 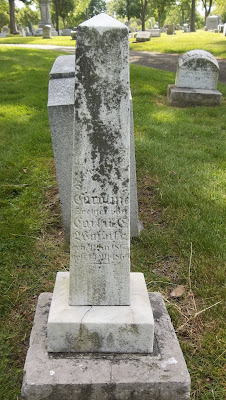 It is hard to imagine the deep sorrow in the hearts of Mr. and Mrs. Warnke, when they had to bury four little girls between the years of 1861 and 1869. They did go on to have two more daughters who survived to adulthood, the Misses Alma and Clarissa Warnke. Carl/Charles Warnke died in 1928, and his wife Elizabeth died in 1925. Mr. and Mrs. Warnke are also buried in Sandusky's Oakland Cemetery.
Posted by Dorene from Ohio at 1:02 AM 0 comments 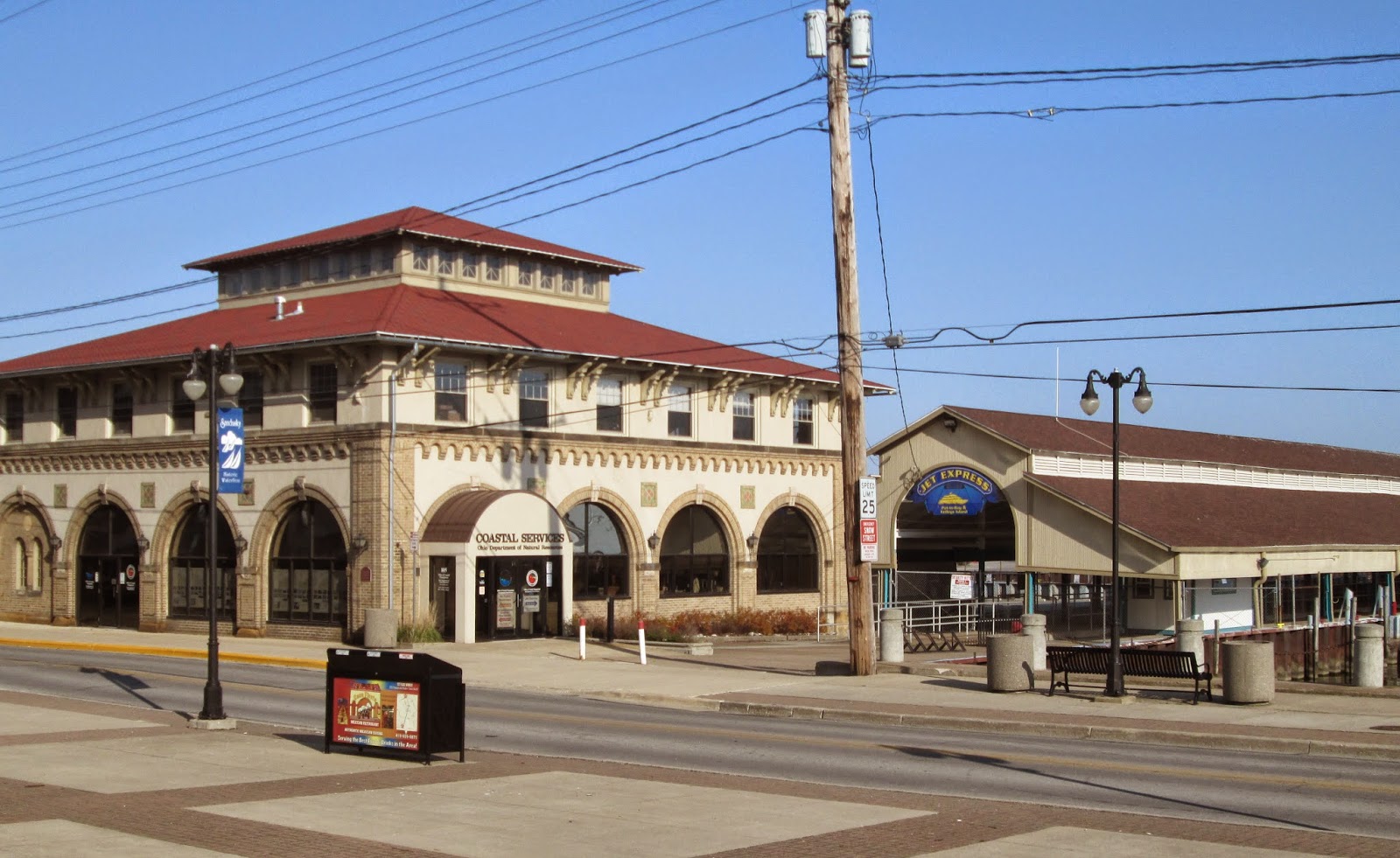 Now home to the Office of Coastal Management, ODNR, this building was constructed in the late 1920s to serve  as the winter headquarters for G.A. Boeckling, the president of the Cedar Point Pleasure Company from 1897 until his death in 1931. The building has Spanish features, including the red tile roof and arched windows. Aquatic symbols adorn the sides of the building which face towards the east and the south. 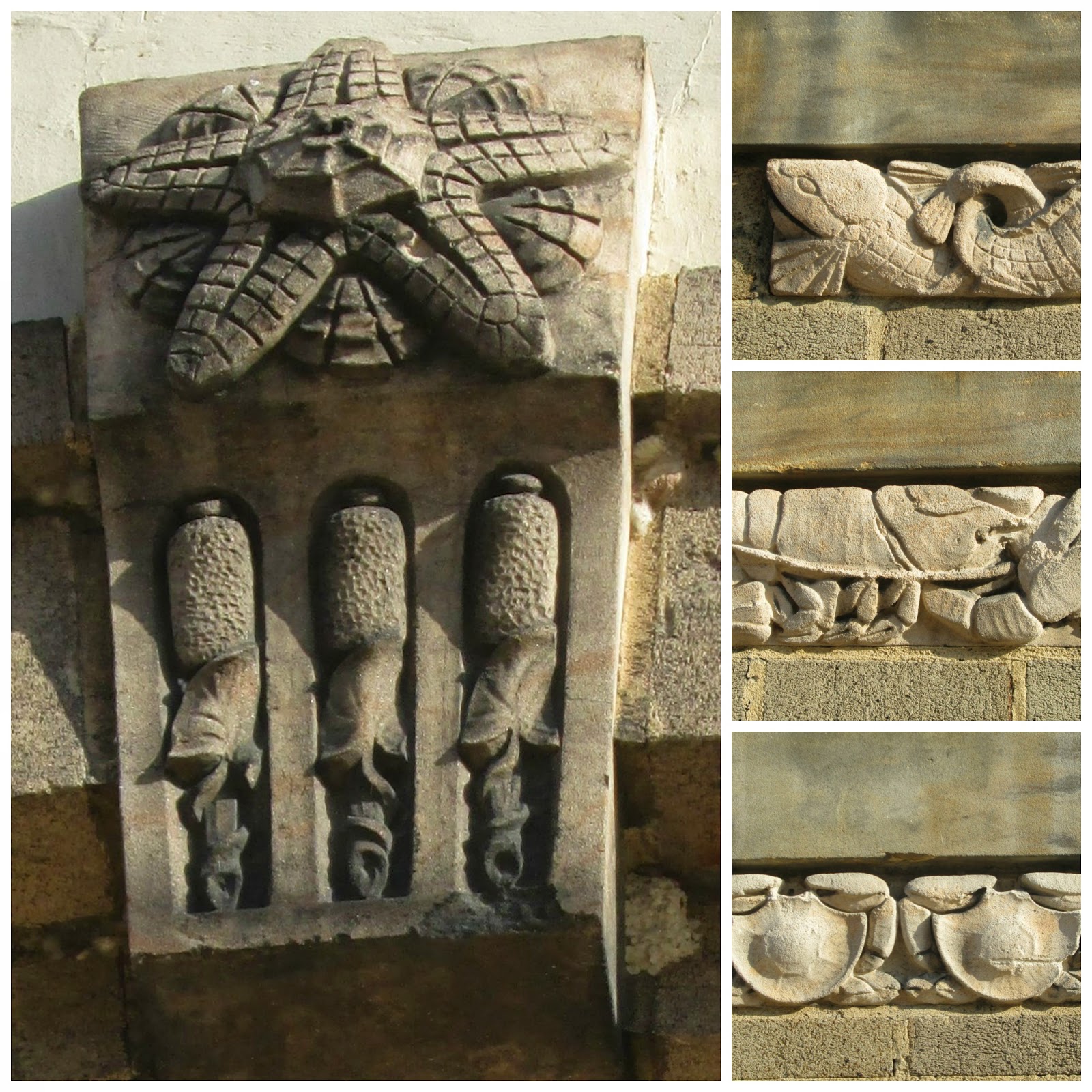 Today tourists can board the Jet Express ferry which is adjacent to the Boeckling building. Passenger ferries have been transporting visitors to Cedar Point and the Lake Erie Islands for many years from this location.

Tombstone Tuesday: "There is Rest for the Weary" 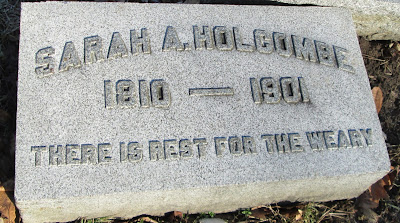 According to the book THE HOLCOMBES: NATION BUILDERS, Sarah Ann Holcombe was the daughter of Daniel Bates Holcombe and Sara (Case) Holcombe (sometimes spelled Holcomb.) In the 1900 U.S. Census, Sarah A. Holcombe was age 90, and she lived with the family of her sister and brother-in-law, Watson and Georgianna Hubbard. On May 5, 1901, Miss Sarah A. Holcombe passed away at the Hubbard residence. Below is a transcription of an obituary for Miss Holcombe which appeared in the May 6, 1901 issue of the Sandusky Daily Star:

Miss Sarah A. Holcombe died Sunday
evening at 11:30 o'clock at the home of
Mr. Watson Hubbard, No. 429 Wayne
Sreet. The deceased had been a long
suffemr and her death was not entirely
unexpected. She was a sister of Mrs.
Watson Hubbard and had made her
home in Sandusky for twenty years.

The inscription on the tombstone of Sarah A. Holcombe reads:

THERE IS REST FOR THE WEARY
Posted by Dorene from Ohio at 1:54 AM 0 comments 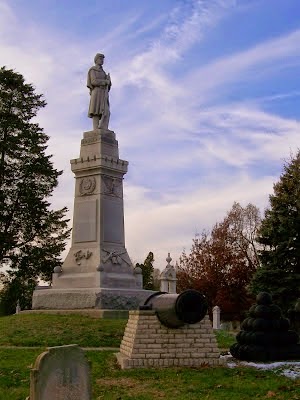 The contract for construction of the Soldiers Monument in the Castalia Cemetery was awarded to Hughes Granite and Marble Company of Clyde, Ohio. The cost of the monument was $2,500. Another $500 was spent for the monument foundation and site preparation. Hughes Granite and Marble Company was one of the best known granite companies in the United States. Among the many monuments produced by Hughes Granite were Ohio's monument to its Civil War soldiers who died at Andersonville, the McKinley Monument at Antietam, and all of the monuments dedicated to Ohio units at Shiloh and Vicksburg. The monument erected in Castalia Cemetery in 1904 was dedicated to 264 men of the area who had served the Union during the Civil War. You can view a photograph of the monunment taken by Ernst Niebergall at Lake Erie's Yesterdays. Thank you for your service to your country, soldiers of Castalia and Margaretta Township!

An article about the dedication of the Civil War soldiers monument at Castalia appeared in the July 5, 1904 issue of the Sandusky Star.

Posted by Dorene from Ohio at 1:30 AM 3 comments

International Museum Day in Erie County on May 16, 2015 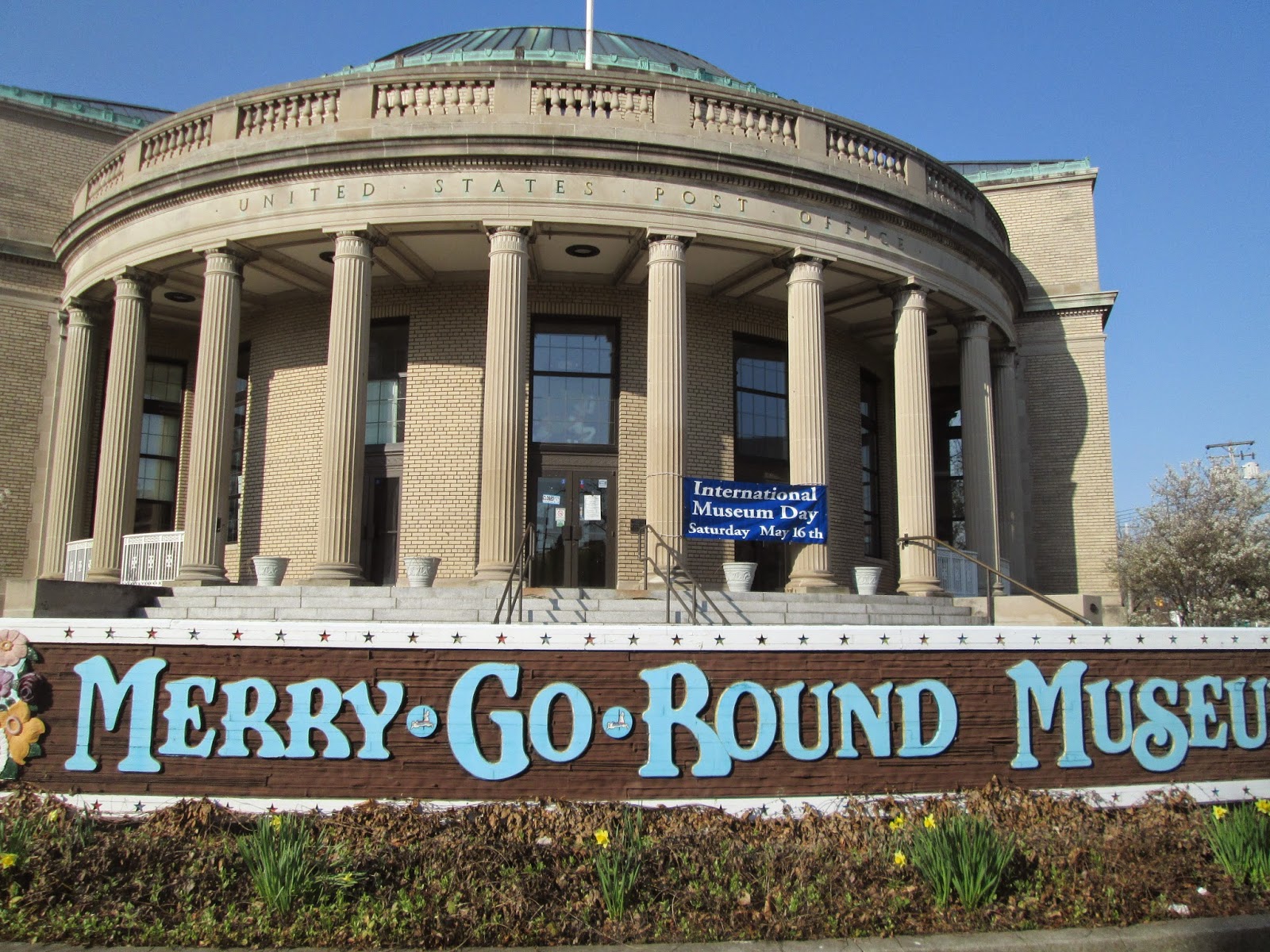 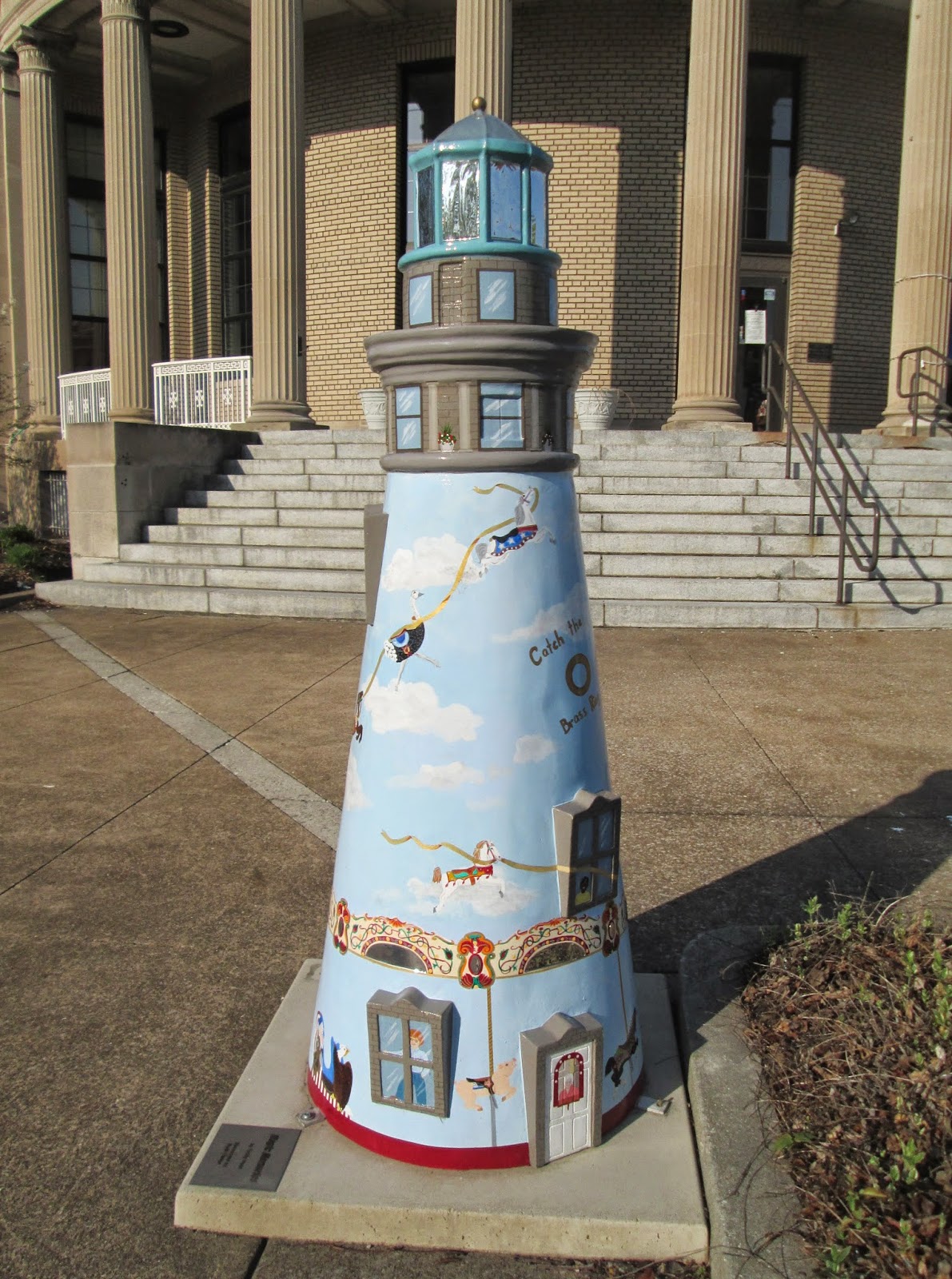 While visiting the many museums in Erie County, take a few moments to stroll through Sandusky's beautiful Washington Park! 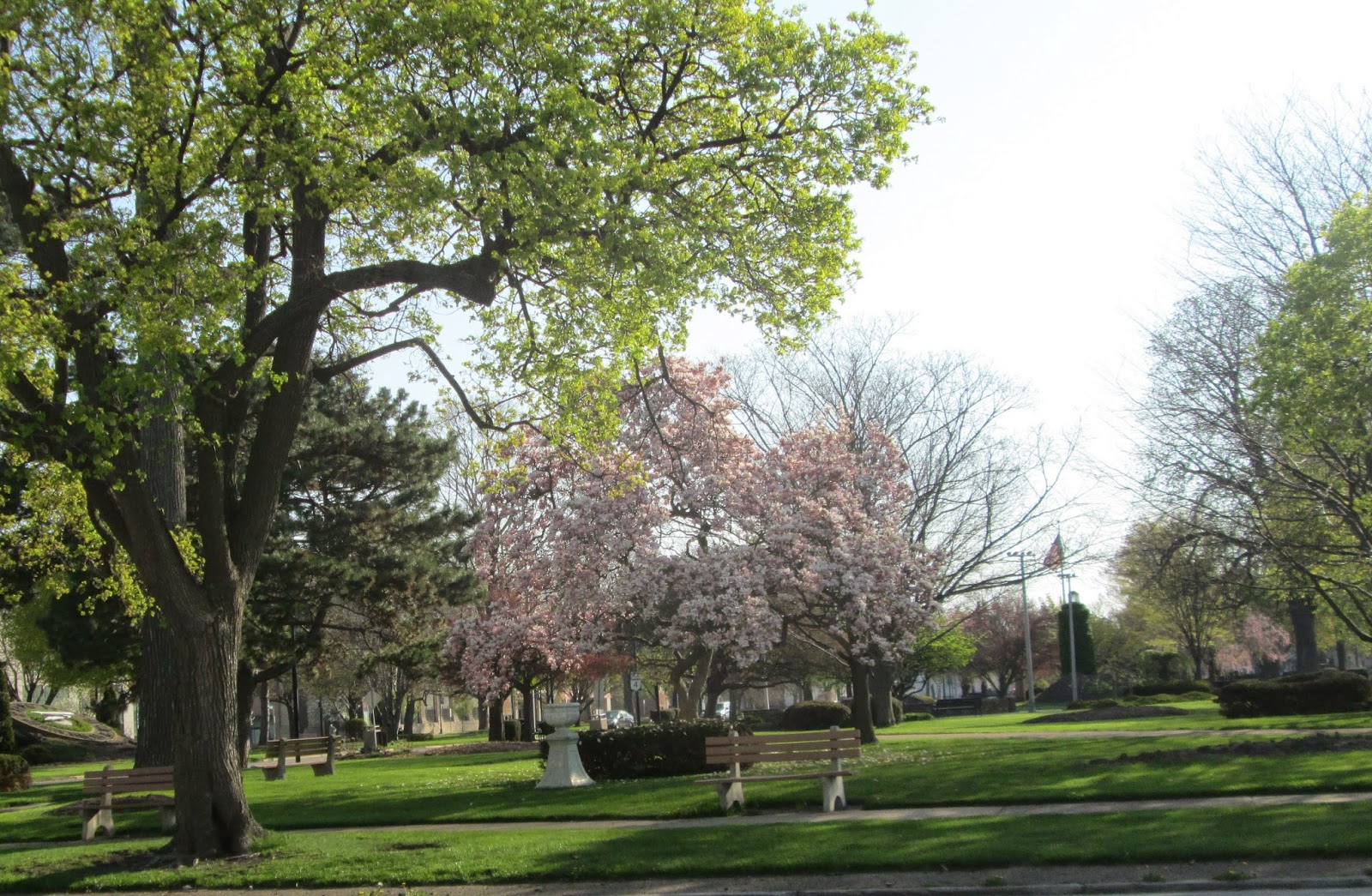 On Museum Day, you and your family and friends can learn a lot of history of the people and places of Erie County!
Posted by Dorene from Ohio at 9:17 AM 0 comments 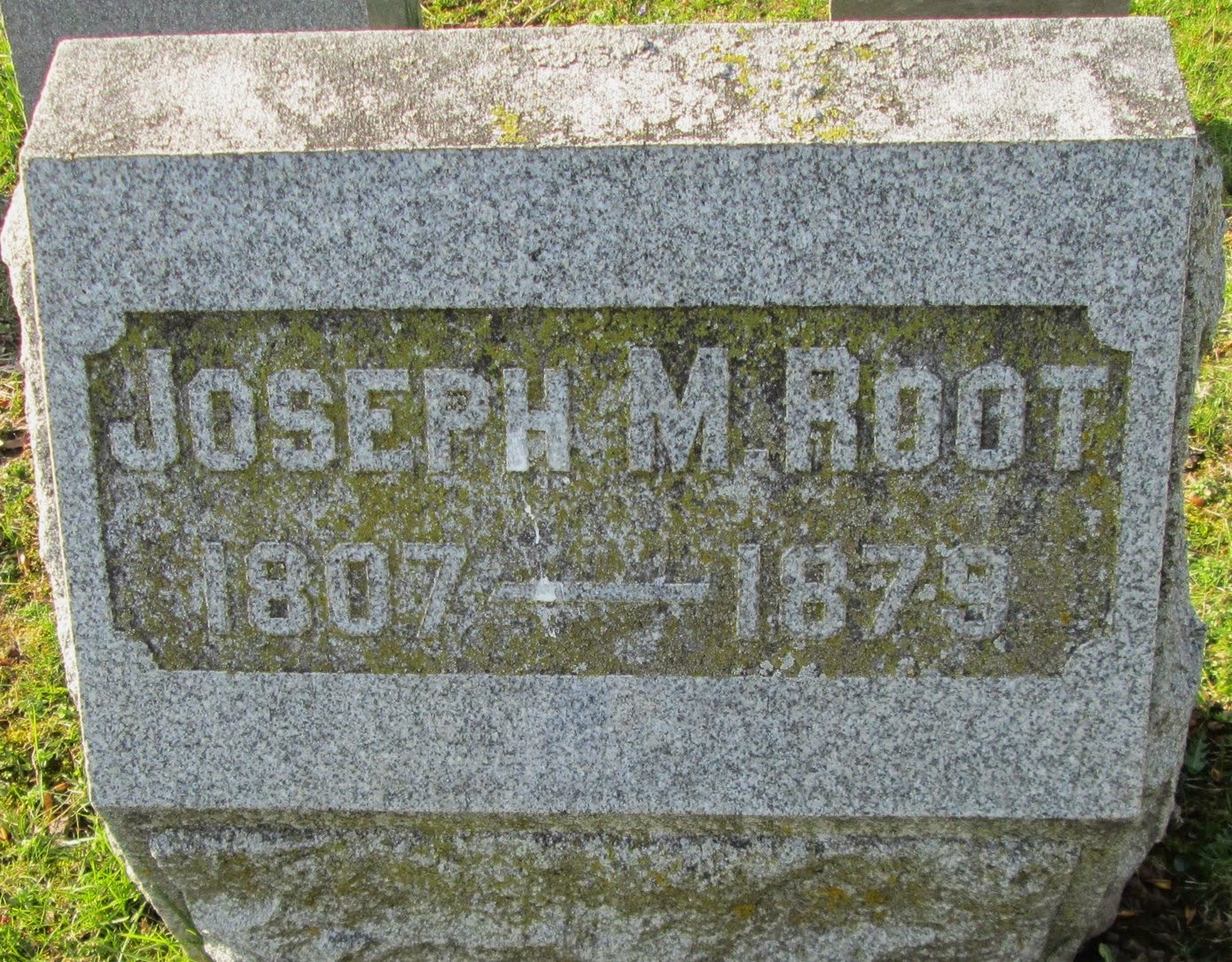 Joseph Moseley Root was born in the state of New York on October 10, 1807. By 1829 he was residing in Huron County, Ohio. Joseph M. Root was elected to the Ohio Senate in 1840. In 1844 he was elected to the United States Congress, and he was re-elected in 1846 and 1848. In volume 9 of the Michigan Historical Collections, we read that Joseph M. Root was one of the original abolitionists in the U.S. Congress.   Mr. Root died  in Sandusky, Erie County, Ohio, April 7, 1879, and he was buried in Sandusky's Oakland Cemetery. The former residence of Joseph M. Root is listed on the National Register of Historic Places, and may have been a "safe house" on the Underground Railroad. 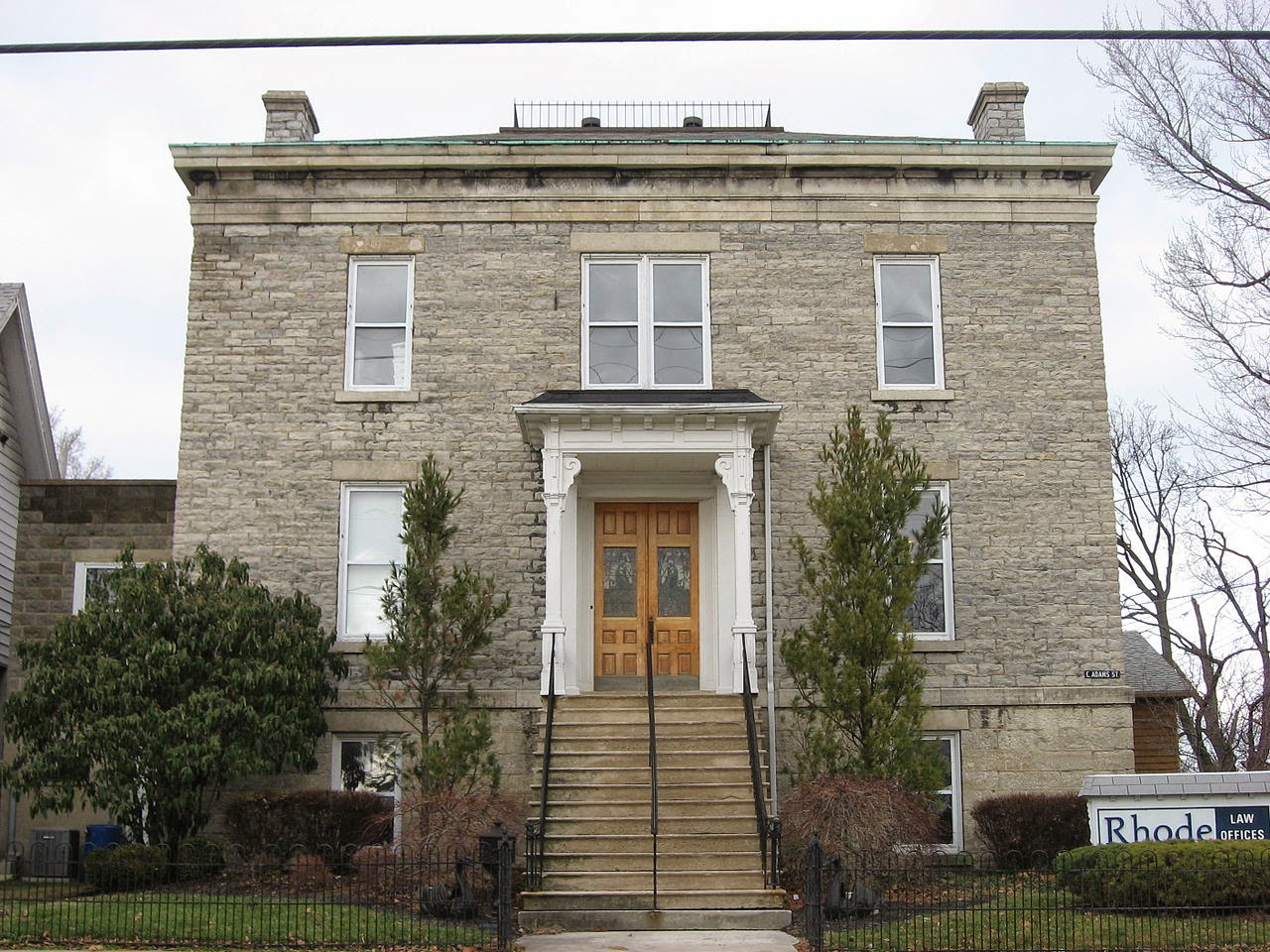