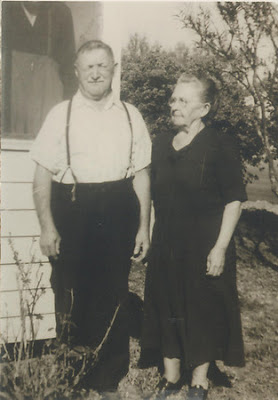 Andrew Yeager and Helena "Lena" Piehl Yeager are pictured to the left in the early 1950's. Andrew Yeager was born in Germany on November 12, 1876 to Lawrence Yeager (Lorenz Jaeger in his native language) and Maria Schweighardt. In 1881, the Yeager family came to United States. Andrew’s younger brother Frank was born after the family settled in Ohio.

Volume 38 of GERMANS TO AMERICA lists the following family members on the voyage aboard the ship “Pereire,” which traveled from Havre to New York:

On September 30, 1903, Andrew Yeager married Helena “Lena” Piehl, daughter of Ferdinand Gotthold Piehl and his wife Augusta Jaensch Piehl, who were immigrants from Posen, Germany. Andrew, known as Andy, worked as a tenant farmer. He raised sunflowers at his home in Huron, Ohio. Lena was a wonderful cook and baker. Sugar cookies were one of her special treats. Lena was quiet and gentle natured. Her height was less than five feet.

Andrew Yeager died in April of 1958, while Lena Yeager lived to be 97, passing away on October 15, 1978. Mr. and Mrs. Andrew Yeager are buried in the Union Corners Cemetery, just off Route 250, between Sandusky and Milan. The cemetery is associated with St. John Evangelical Lutheran Church. 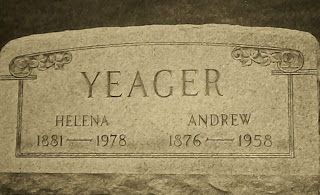 Pictured below is the Piehl family about 1906. Lena Piehl Yeager is the first person on the left, in the back row. Click on the image for a larger view. 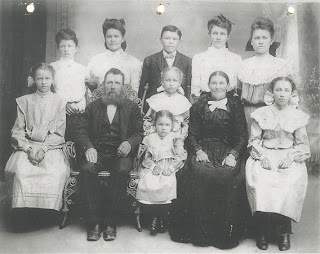 Posted by Dorene from Ohio at 4:47 AM