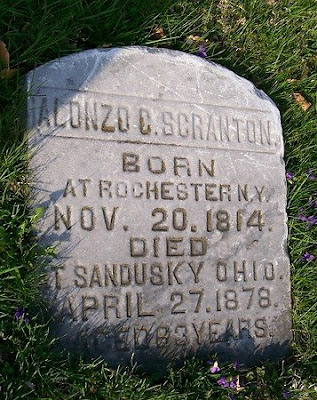 According to the GENEALOGICAL REGISTER, DESCENDANTS OF JOHN SCRANTON OF GUILFORD, CONN., Alonzo Camp Scranton was the son of Israel Scranton. He was born on November 29, 1814 in Rochester, New York. While living in Erie County, Alonzo C. Scranton was an employee of the Mad River and Lake Erie Railroad. In 1844, Alonzo Scranton married Jane Elizabeth McDowell. The 1860 U.S. Census shows Alonzo and Jane living in Sandusky, Erie County, Ohio, with sons Alonzo C. Scranton, Jr., John M. Scranton, and William Scranton.

Alonzo C. Scranton died on April 27, 1878 in Sandusky, Ohio. He is buried in Sandusky's Oakland Cemetery. Jane Scranton married Oliver P. Cowdery after the death of her first husband. The obituary index of the Hayes Presidential Center indicates that Jane Scranton Cowdery died in Thornville, Ohio in 1918, at the age of 91.

A genealogical website from Michigan hosts a photograph of the tombstone of Alonzo C. Scranton, Jr. He died on March 18, 1927, and his tombstone shows that he served in Company A of the 4th Michigan Infantry during the Civil War.
Posted by Dorene from Ohio at 4:52 PM