The topic for the 114th Carnival of Genealogy, as posted by Creative Gene, is the Annual iGene Awards. Bloggers are to choose their best blog posts in five different categories. Here are the entries from the Graveyard Rabbit of Sandusky Bay from 2011. 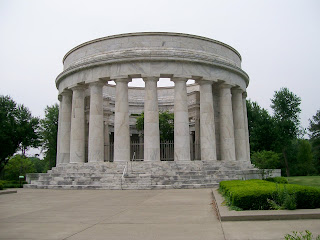 Best Screenplay - The Wedding of Leona Schoenegge and Clifford Lindsley could be adapted into a screenplay. Clifford and Leona had their hopes and dreams shattered when their farmland was taken by the U.S. Government by eminent domain for the war effort during World War Two. They rebuilt their lives and moved to a new farm in an adjacent county. They worked hard, never stopped loving each other, and always kept a wonderful sense of humor.

Best Documentary - Documents from the Pension File of Civil War Veteran Ernest Marshall/Samuel Wilson . In 1862, Ohio resident Ernest/Ernst Marshall enlisted in Company A of the 158th New York Infantry under the name of Samuel Wilson. He remains somewhat of a mystery man, but his Civil War pension file helps us learn more about his life and his family.

Best Biography - Brother Sulpicius, C.F.X. Nicholas Charles Cross, went from a youth leader at Holy Angels Church in Sandusky, Ohio to become a teacher at Catholic schools in Kentucky, West Virginia, Virginia, and Massachusetts. He was very well respected and he never lost his passion for knowledge and serving the church.

Best Comedy - When the Reverend Ate the Whole Pie. I laugh every time I recall the story of Rev. Thompson eating a whole pie from my Great Grandma Ada's pantry!
Posted by Dorene from Ohio at 1:38 AM

"When the Reverend ate the whole Pie" was definitely the best comedy. It had me laughing then and it has me chuckling now just remembering it, lol!

Thanks for participating in the COG, Dorene!