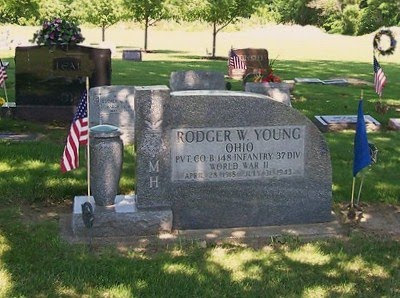 Rodger W. Young was killed during World War Two on July 31, 1943. When his unit was on New Georgia, Rodger sacrificed his own life, and as a result saved the lives of many men in his platoon. You can read more about Rodger W. Young at the Home of Heroes website. What I find so amazing is that Rodger W. Young was 5 feet 2 inches in height, weighed only 125 pounds, and was hearing impaired, but he did not let those limitations interfere with his brave service to his country. Rodger W. Young was posthumously awarded the Congressional Medal of Honor for his courage in battle. The remains of Rodger W. Young. were returned to the United States in 1949 and he was buried in the McPherson Cemetery in Clyde, Ohio.

We have visited Rodger Young's grave in the past, but did not know about the song. What a nice post!

I often heard of Rodger Young Park in Fremont, but I did not learn about his amazing heroism until this year!