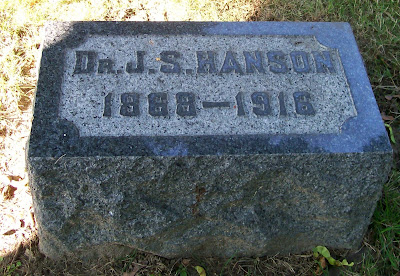 Dr. James Summers Hanson was born in London, Ontario on June 15, 1867. (Dr. Hanson's death certificate lists 1867 as his birth year, but his tombstone reads 1868.) Dr. Hanson's father was also a physician. Dr. James S. Hanson attended Wayne State University School of Medicine, and graduated from the Detroit College of Medicine and Surgery in 1891, according to the Directory of Deceased American Physicians, 1804-1929, which is available at Ancestry Library Edition.

An article in the June 1, 1916 issue of the Sandusky Register reported that Dr. James S. Hanson moved to Sandusky, Ohio about 1898. He was called to Sandusky on business, and he liked it so well in Sandusky that he decided to move to Sandusky. Besides serving as a physician in Sandusky, he also was one of the directors of the Columbus Mutual Life Insurance Company.

Dr. James S. Hanson passed away at his Jefferson Street home in Sandusky on May 31, 1916. He had been sick for several weeks. At the time of his death, he was only 48 years of age. Dr. Hanson was survived by his wife, a son, one brother, and two stepbrothers as well as a stepsister. He was buried in Oakland Cemetery. A lovely bench is located adjacent to his tombstone.

Posted by Dorene from Ohio at 4:53 AM