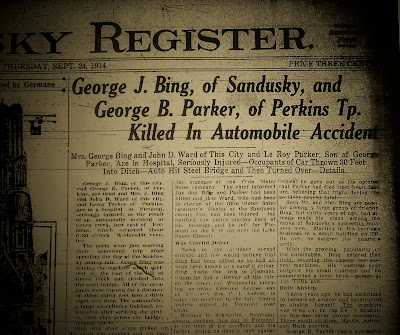 On September 23, 1914, following a day at the Sandusky County Fair in Fremont, Ohio, George B. Parker and George J. Bing were killed in an automobile accident east of Fremont. Also injured were Mrs. George J. Bing, Leroy Parker, and John D. Ward. George Bing,who operated a carriage shop in Sandusky, was driving the car. The automobile, a six-cylinder Oakland, skidded at the foot of the hill at Green Creek, and crashed into the steel bridge. The occupants of the automobile were thrown several feet, into the ditch.

Mr. Bing suffered a crushed skull and other serious injuries. George B. Parker died while enroute to the hospital in Fremont. Mrs. Bing suffered a fractured skull, but she survived. John B. Ward, a representative of the Ohio Motor Company died twenty five hours after the accident. He had suffered three broken ribs, a broken collar bone, and serious lung injuries.

Leroy Parker, son of Perkins farmer George B. Parker, received a slight fracture of the skull, and a fracture of the spine, but no serious spinal cord injuries were sustained. The family story is that the hospital staff thought Leroy was dead, and had covered his body with a sheet. They realized he was alive when they saw the sheet move. Of course, Leroy Parker lived, went on to marry Ada Steen, and have four children,and a host of grandchildren and great-grandchildren. 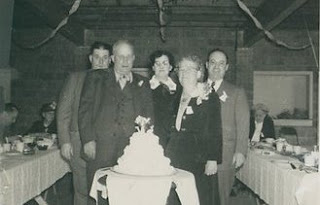 George B. Parker was buried in the family lot at the Perkins Cemetery. Being the only child, Leroy Parker would always make sure his mother, the former Marian House, was taken care of, for the rest of her life. 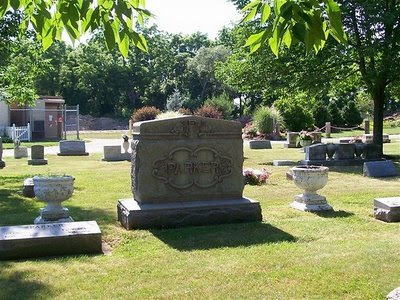 George J. Bing had built a biplane in Sandusky, and he is remembered at the Early Birds of Aviation website.
Posted by Dorene from Ohio at 9:52 AM

So did they hire a Los Angeles accident attorney to represent them?

No lawsuits were involved, to my knowledge, just a lot of heartache.

Here is a great chance to drive a large number of visitors to your blogs and websites for free.

Submit your websites, blogs, videos to http://www.zillionsb.com and get 1000s of targeted visitors everyday for free. It also helps your websites/blogs gain valuable backlinks.

Let the other bloggers cast their votes to push your posts up for a greater visibility. Enjoy a free, huge traffic to your sites.

The family story is that the hospital staff thought Leroy was dead, and had covered his body with a sheet. They realized he was alive when they saw the sheet move,Its very sad story but we should not weak in this types of problems.