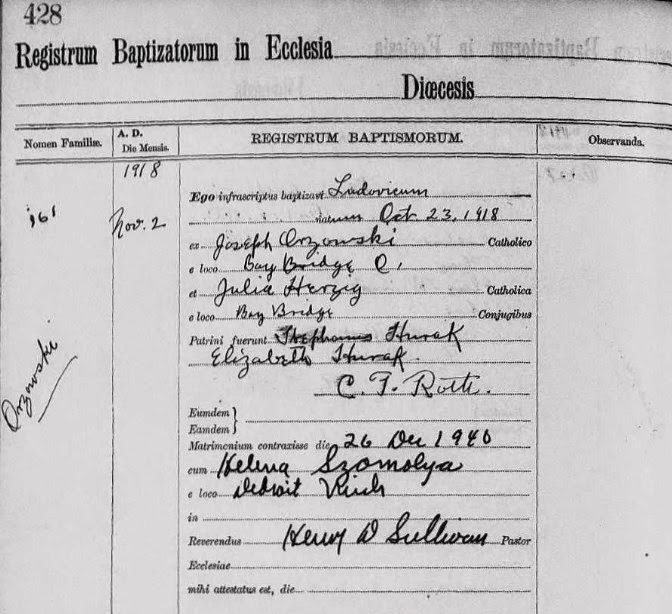 This week I ran across my the baptism record of my great uncle Louis J. Orshoski, at FamilySearch. The record was part of the St. Mary's records found at the Ohio Diocese of Toledo Catholic Parish Record collection at FamilySearch. While the records are not indexed, it is relatively easy to find a record, if you know the approximate date of the event. My uncle Louie's first name was listed in its Latin version, which is Lucovicus. The parents of Louis Orshoski were Joseph Orshoski and Julia Herzog, though on the church record the surnames are spelled as Orzowski and Herzig. The baptismal sponsors were Stephen and Elizabeth Hurak. Sadly, when my Uncle Louie was just an infant, his mother died from consumption. It turned that since Grandpa Joe Orshoski already had several sons, and was now widowed, his godparents, the Huraks took Louis into their home and raised him. In the picture below, Louis Orshoski is held by his godmother Elizabeth Hurak. He is the infant wrapped in a blanket in the back row. His biological mother, Julia Orshoski, is the person in the coffin on the old steps of St. Mary's Church. His father, Joseph Orshoski, is the man in the dark hair, to the upper left of the coffin. Louie's five brothers are standing around their dead mother. How very sad for those young men to lose their mother while they were so young. 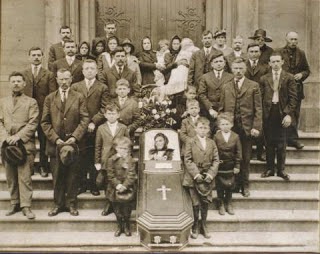 Louie went on to serve in the U.S. Navy, and he was a truck driver for many years. He had a wonderful sense of humor. Louis J. Orshoski died on March 5, 2007, He was survived by his wife Helen, a daughter, a son, five grandchildren, and seven great grandchildren, and two sisters and brothers from the Hurak side of his family. Mr. Orshoski was buried at Meadow Green Memorial Park in Huron, Ohio.

Posted by Dorene from Ohio at 6:51 PM