The extended Steen family Thanksgiving celebration in 1927 was held at the home of my Great Grandaunt, Alpha Steen Martin and her husband Fred Martin, Sr.at their home on Columbus Avenue in Sandusky, Ohio. Pictured below are the Steen family in the early 1900s. Pictured are twins Alpha and Ada Steen (Ada was my great grandmother), along with their parents Charles and Sarah Steen, and their younger brother Rollin Steen. 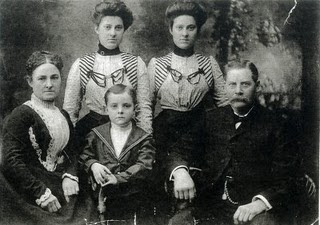 By 1927, both twins were married: Alpha to Fred Martin, Sr., and Ada to Leroy Parker. Ada and Alpha stayed close throughout their entire life, though Ada was primarily a county girl, and Alpha preferred city life. The following news article in the Perkins Township column of the Sandusky Register of November 30, 1927 reported on the Steen family Thanksgiving in 1927:

Aunt Alpha opened her home to her immediate family along with her sister's mother-in-law, and a Brooks family member related to Mrs. Rollin Steen. By 1927, Alpha had a son in college, and two of Ada's sons were married. Rollin was all grown up and had a wife and two children. Since Roy and Ada Parker lived on a farm, they probably contributed a variety of fruits and vegetables and home canned goods to the Thanksgiving dinner. Mr. Fred Martin, Sr. was the proprietor of Martin's Confectionery, which was a wholesale and retail confectionery business. I am sure that delectable goodies from Martin's Confectionery were served at Thanksgiving dinner. Advertisements from the November 22, 1927 issue of the Sandusky Star Journal indicate that coffee sold for 29 cents a pound, and eggs were 36 cents a dozen. The Erie Market was running a special sale of home dressed chickens, ducks, and geese for 30 cents a pound.

All those who attended that lovely Steen family Thanksgiving from 1927 are now gone, but I can imagine that there was plenty of wonderful food, lots of laughter, and lively card games being played. Mom always said that Grandpa Roy Parker was lots of fun, and he truly enjoyed spending time with the family. It must have been very special for Ada's first grandchild, Tommy, to join the family celebration! Tommy, whose full name was Steen Thomas Parker, is pictured below, with his parents Steen and Doris Parker. 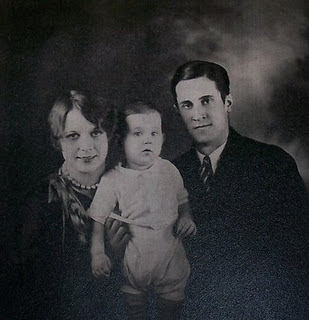 Below is a small portion of the Steen family tree. In each of four generations, the name Steen is found as either a surname, maiden name, or first name. Today, I have a brother living in Ohio and a cousin living in California who still have the name Steen in their full name. The Steens were oh so proud of their name and their heritage.

Posted by Dorene from Ohio at 1:23 AM

Wow, Doreen. It's not every family that has their Thanksgiving dinner written up in the local newspaper. Very classy! You did a marvelous job of setting the story and sharing interesting tidbits of local history. Bravo! Very well done!

And thank you for your very nice email. The COG remains close to my heart and I'm so thankful for wonderful genealogists and writers like yourself. You make the COG the classic it is today.

Thanks for your kind words, Jasia!

In the local papers in Sandusky in the 1920s through the 1960s, lots of family gatherings were written about in the paper! You didn't even have to be rich or famous!

Interesting to read the article and then your part about what was probably happening behind the scenes.

Dorene, your comments about the times, stores, ads, made the article, which was interesting in and of itself, come alive. Showed such a gentle love and respect for the family highlighted in the article. Very nice.

Wow, don't you just love those small town newspapers that would make visiting relatives a big deal! And how great that you found this written up, too. I love how you used the prices from the ads to fill in some of the rest of the story.

So well done, Doreen. Reading about the contributions of the Parkers and Mr. Martin's candies brought the scene to life.