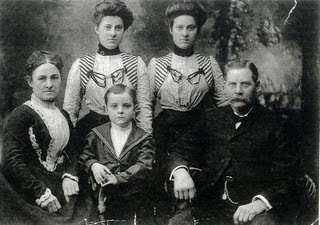 My great great grandmother, Sarah Nodine Milner Steen, seen on the far left of the Steen family picture above, has a complicated situation concerning her parents. Her date of birth, as listed on her death certificate, was on November 13, 1850 in Michigan. The death certificate listed Sarah's parents as Henry Milner and Huldah Westfall Milner. However, an obituary from volume 14 of the Firelands Pioneer states that the daughter of Henry and Huldah Westfall Milner was adopted. 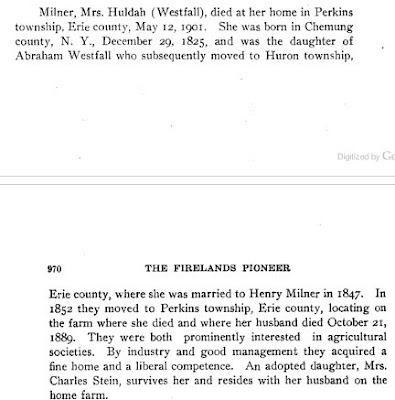 In 1990, my mother and I were curious about Great Great Grandma Sarah. We contacted Erie County Probate Court, to see if we could find out more information. The staff from Probate Court stated that in Erie County Court records, Sarah's twin daughters Ada Parker and Alpha Steen, give their mother's name as Sarah Milner, and Sarah had been born in Hastings, Michigan. Yet another birth record of an infant born to Sarah and Charles F. Steen, who died young, stated that the Sarah's maiden name was Nodine.

So...next we contacted Probate Court in Barry County, Michigan, which was in Hastings, Michigan. The Probate Register of Barry County Probate Court did not have on file a birth certificate for Sarah Nodine, because their records did not begin until 1863. However, she looked through some microfilm records, and found that Wheeler Nodine died in February, 1872, and one of his heirs was named Sarah, and was residing in Ohio at that time. Records also hinted that Eliza Jane was the mother of some of the children of Wheeler Nodine, but it did not definitively state that Sarah's mother was Eliza Jane Westfall. 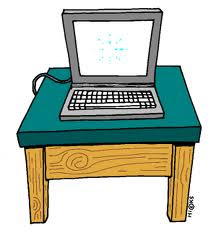 When I was first becoming familiar with computers and email correspondence, another researcher from the West coast (who sadly has since passed away) told me that her ancestor Julia Nodine was also the daughter of Wheeler Nodine and his wife Eliza Jane Westfall. We made a conjecture that for reasons unknown, Wheeler and Eliza Jane Westfall Nodine gave their infant daughter, Sarah Nodine, to Eliza Jane's sister Huldah Westfall Milner, living in Erie County, Ohio.

Though the total story is not told, our hypothesis seems to be correct. A third cousin who lives nearby, allowed me to photocopy this page of birth records from the Milner family Bible. She said that the Bible originally belonged to Huldah Milner, then was passed down to Sarah Nodine Milner Steen, and then was kept up to date by my great grandmother Ada Steen Parker. Whoever filled out the births included both the biological parents of Sarah, who were Wheeler Nodine and Eliza Jane Westfall, as well as the adoptive parents of Sarah, Henry Milner and Hulday Westfall. The sisters were only about two years apart in age. We may never know why Sarah was adopted by the Milner's, and that was their only child. Wheeler Nodine and Eliza Jane Westfall Nodine had several other children, and Eliza appears to have been married three times. 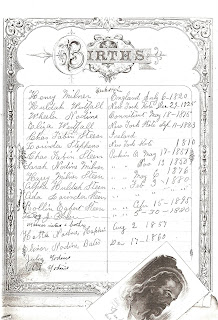 The birth records state that Sarah Nodine Milner was born in Ohio, but all other records indicate that she was born in Hastings, Michigan. At the very bottom of the page of birth listings are the names of several of Sarah's biological brothers and sisters.

Sarah married Charles F. Steen in March, 1875, and she died on March 6, 1939. She had four children, including Harry, who died young, twins Ada and Alpha, and another son Rollin. She was a lifelong member of the Perkins Grange, having been a charter member of that organization in 1874. Reading between the lines, I think that Sarah cherished her family. She had a lot of photographs taken of her children, and according to Great Grandma Ada's scrapbooks of clippings, she attended countless family dinners, parties, and family reunions. Though her past is somewhat mysterious and we do not know the reasons why she was adopted, she had a rich life, and I am thankful that she kept a record of so many of her family connections. 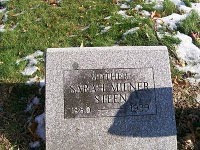 Posted by Dorene from Ohio at 1:26 AM

How fortunate that you and other descendants were able to find records leading to Sarah's biological parents; I've come across a number of adopted children in research and it can be so hard to do this.

Thanks for stopping by Greta! I really am lucky....of course I have a brick wall in one of my husband's lines regarding an adoption, but maybe one of these days I will find the answer!

Indeed, a complicated situation surrounding Sarah. Taking us through your research steps was very interesting. Thanks.

Having the Bible record is great. I'm surprised that the fact the she was adopted was mentioned in the obituary. I doubt I'll ever solve the adoption mystery in my tree.

I have another adoption puzzle on my husband's side...and most of the people who would have any knowledge of the situation are deceased now! Those brick walls are frustrating!

Interesting story, Dorene. I've come across a couple of adoption situations in my own research. It seems like the records never really tell enough of the story, and I'm left wondering what happened that caused a mother to give up one of her children.

It crossed my mind that maybe it was as simple as since Huldah could not have her own baby, Eliza gave her sister one of her children.... rather simplistic, but possible!

I thought of that too in this case. Maybe someday you'll find a letter or something...