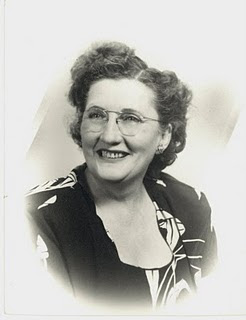 While I was on a mission to assist someone in researching their family history, I ran into a death record for my beloved Great Grandma Irene.

Below is the Interment Record from Holy Angels Church in Sandusky, Ohio, which is accessible online at Family Search, under the category: Ohio Diocese of Toledo, Catholic Parish Records, 1796-2004. (Click on the image for an enlarged view.)

Irene Larkins Risko, who died from heart disease on September 17, 1961, was interred at Calvary Cemetery on September 20, 1961. The record states that Father Bishop administered sacraments to her. The website of the American Catholic states that the sacrament of Anointing of the Sick, formerly known as the Last Rites, is a ritual of healing appropriate not only for physical but also for mental and spiritual sickness.

My mom always thought that Grandma Irene felt she was out of favor with the church because she had been divorced (and more than once.) In spite of that, she had a deep faith, and she felt very strongly that if prayers were offered up on Good Friday, that they were more likely to be answered. It gives me great joy to know that she received sacraments that were very important to her at the end of her life, which was filled with many ups and downs, and a lot of heartache. Had I not been browsing through church records online at Family Search, I never would have known this small, but so meaningful reassurance that my great grandmother found spiritual peace before she passed away. Grandma Irene had many failed relationships, and she lost both her parents and daughter before she died, but when I knew her, she was funny, generous, kind, and she had a heart that was filled with love for her family. 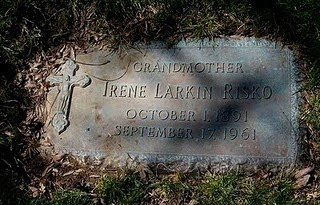 Posted by Dorene from Ohio at 8:07 AM

What a wonderful find, I'm so glad.
it gives you peace. My grandfather had been away from mass for many years but took such comfort in receiving last rites before he passed. I imagine your Gram felt the same way

I would never have thought a record from long ago, with that fact on it,
would make me so happy, but it really did!

Good things happen when doing good for others. Congratulations on a lovely touching story that brought solace to your grandmother at the end of her life. Very nice story.

Thanks so much for stopping by, and for your kind words, Lisa & Joan!

What a grand surprise find!

It is so fun to find unexpected gems in our genealogical adventures!

Knowing Irene received the "last rites" and your serendipitous discovery of this fact is one of the pleasures of pursuing our family histories. The photo of the grave marker is lovely with the slanting sun and soft shadow.