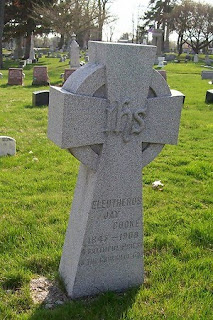 Eleutheros Jay Cooke was born in Sandusky, Ohio on May 24, 1847. His father was Pitt Cooke, a brother of Civil War financier, Jay Cooke. (Eleutheros Jay Cooke's first name was also the first name of his paternal grandfather, an early lawyer in Sandusky, Ohio.) Rev. Cooke's mother was Mary Elizabeth Townsend Cooke. Mrs. Pitt Coooke was an amazing woman. Besides raising a large family of her own, she also took in her orphaned siblings, after their parents died during the cholera epidemic. (A lovely portrait of Mrs. Pitt Cooke can be seen at The Follett House Museum in Sandusky, Ohio.)

Shortly after Rev. Cooke shook hands with presidential candidate William Howard Taft, Rev. Cooke suddenly died, as a result of heart failure. The funeral for Rev. E. Jay Cooke was held at Grace Episcopal Church on October 31, 1908. He was buried at Oakland Cemetery. Close friends of Rev. E. Jay Cooke served as pallbearers: C.W. Sadler, George R. Butler, Frank Sloane, Charles L. Mills, Ed Zurhorst, Edward H. Marsh, Dr. A. J. Gawne, and George Barker. The letters IHS which appear on Rev. Cooke's cross-shaped tombstone represent the first three letters of the name of Jesus in the Greek language. The inscription at the base of Rev. Cooke's tombstone is: A Faithful Priest in the Service of God.

A plaque on the east wall of the sanctuary of St. Stephen's Episcopal Church in Schuylerville, New York reads:

“To the Glory of God and In Loving Memory of
Eleutheros Jay Cooke
May 24, 1847–October 27, 1908
Our Beloved Rector and Friend
From December 1896 until the day of his death

Well done thou good and faithful servant
Enter thou into the joy of the Lord
Matt. 25:21”
Posted by Dorene from Ohio at 4:05 AM