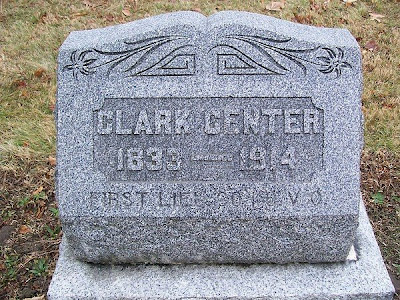 Clark Center was one of Sandusky's leading citizens. A biography of Clark Center from Harriet Taylor Upton's HISTORY OF THE WESTERN RESERVE states that he was "among the honored pioneers of Sandusky." He was born in Wayne County, New York in 1833, the youngest child and Mr. and Mrs. James H. Center. Clark's mother died when he was just three years old. In 1836 James Center moved his family to Huron County, Ohio, where he settled on a farm located on the Huron River.

After moving to Ohio, Clark worked for various farmers, and eventually learned the machinists' trade. He began working as a machinist in Sandusky in 1854. When the Civil War broke out, Clark Center had a vital role in raising Company I of the Third Ohio Cavalry. He recruited men from Erie, Huron, and Ottawa Counties. He had to stop his wartime service temporarily, when he was afflicted with typhoid fever. At the end of the Civil War, Clark Center resumed his work as a machinist in Sandusky. In 1872, he was appointed a revenue collector for the U.S. Government. Clark Center had also served as Sandusky councilman for twelve years. During his time on council, Mr. Center secured an investigation of the financial affairs of the city, which concluded in the arrest of a city clerk on embezzlement charges.

Mr. Center's obituary, which appeared in the October 10, 1914 Sandusky Register, reported that Clark Center was a "unique character." He often was seen on the streets of Sandusky wearing tall silk hat and a boutonniere. Clark Center died on October 9, 1914. He was survived by his wife, the former Caroline Bauer, and a son, E. B. Center. Clark Center is buried in Oakland Cemetery.
Posted by Dorene from Ohio at 4:00 AM