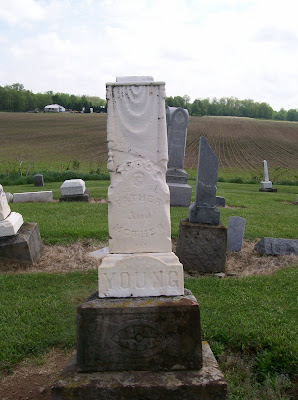 Professor Edward Hudson Young wrote in OUR YOUNG FAMILY IN AMERICA that Noah Young, the son of Morgan and Jane Losey Young, was born in April of 1788 in Essex County, New Jersey. He married Anna Young in North Monroeville, Ohio on March 20, 1811. Noah Young died on his farm just east of New Haven, Ohio on July 5, 1858. Noah Young served as a Corporal in the 6th Ohio Militia during the War of 1812. His commanding officer was his cousin, Capt. Jacob Young. 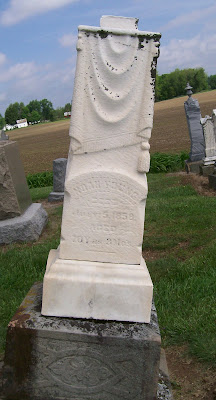 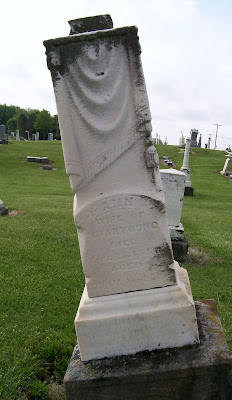 I am very grateful to Professor Edward Hudson Young for taking the time to interview many, many Young descendants in the 1940's, so that we may all know more about the family history of our Young ancestors. 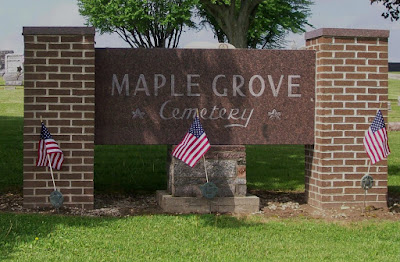 Posted by Dorene from Ohio at 1:40 PM

i was wondering if its at maple grove or across the street at the new haven cemtery?

I just learned today that the older cemetery is known as the New Haven Cemetery, and Maple Grove is across the road.

I have been researching my family history for a while now. Noah and Anna Young were either my 3rd or 4th great grandparents through Susan Young, then her daughter Harriet Waggoner Mitchell, her son Milburn Mitchell, his daughter, my mother Rosalyn Mitchell Cook. There is some confusion as to whether Susan was their daughter or granddaughter. Can you tell me which is correct? Thank you.

Personally I have only researched Noah and Anna Young's line as carried down through their daughter Mary Ann Young, and her spouse Lindsey House.

But, according to a site on Rootsweb, Susan Young was the granddaughter of Noah and Anna Young.

Chris,
Page 81 of OUR YOUNG FAMILY IN AMERICA
states that Susan Young was the daughter of Nathaniel Mitchell Young and his first wife, Catherine Tindall.