Aunt Bertie was a Police Officer, and Co-Owned a Business

Alberta "Bertie" Orshoski was the only daughter of Steve and Emma (Yeager) Orshoski. The first of the five Orshoski children, Bertie was born on October 20, 1926. Bertie graduated from Margaretta High School in 1944, where she was on the cheerleading squad with her aunt, Stella Orshoski. (Though Stella was Bertie's aunt, they were very close in age.)

For twenty four years, Bertie and her husband John Maschari owned and operated the Log Cabin Inn, a restaurant in Bay View. Through the years, a host of relatives were employed by Bertie and John at the Log Cabin. Bertie's father Steve even helped out on occasion. The Log Cabin was a favorite place in the area for banquets, and luncheon business meetings. Boaters found it handy to dine there in the summer months, especially before the closing of the old Sandusky Bay Bridge. Many family anniversary parties, holiday parties, and funeral dinners were hosted at the Log Cabin by Bertie and John. When a close family member or friend passed away, Bertie often prepared a carryout meal and delivered it to the grieving family. 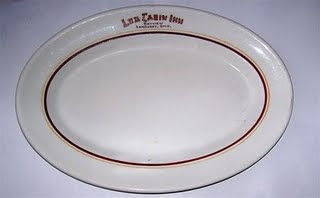 While she had no college degree, Bertie was a very successful business woman, and was known for her work ethic. In the 1960's, she also served as a Deputy Police Woman for the Bay View Police Department. In the article below, which appeared in the June 8 , 1961 issue of the Sandusky Register, Bertie, who then was also known as Mrs. Alberta Rutherford, was award with a Certificate of Attendance at the Law Enforcement Training School. At this time she was on the Special Police force for the Village of Bay View. 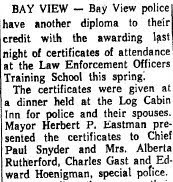 Alberta and her husband sponsored numerous youth baseball leagues in Bay View, and was active in organizing "Bay View Days" celebrations through the years.

After a battle with cancer, Alberta Maschari passed away on February 19, 1997. She was survived by two children, four grandchildren, and six great grandchildren. Inurnment was at Calvary Cemetery in Sandusky, Ohio. Bertie's memorial overlooks the grave of her grandson, John, who died in 1985, while still in his teens. 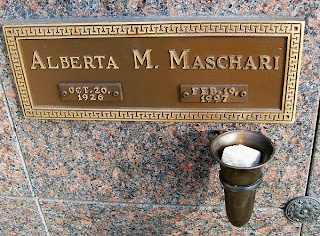 While this business is no longer in operation, the Log Cabin Inn, later known as the Angry Trout, served customers in Northern Ohio for many years. 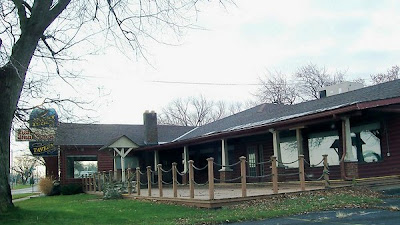 Posted by Dorene from Ohio at 4:11 AM

What a wonderful interesting aunt to have. Nice article.

Thanks so much! Aunt Bertie was one of a kind!

Dorene, your aunt sounds like she must have been very energetic as well as generous and kind. Thanks for telling us about her.

Thanks for sharing Bertie's story!