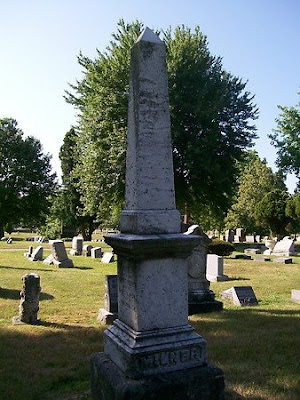 Erie County Census Records for 1860 indicate that Thomas Milner was born in England about 1797. THE HISTORY OF ERIE COUNTY, edited by Lewis Cass Aldrich, states that Thomas Milner and his wife, the former Ann Bowser, took their family from Yorkshire, England to Canada in 1829. The Milner family moved to Erie County in 1836. Thomas and Ann had a family of nine children, but only five children were living in 1889: Henry, Thomas, John, Mary A., and Sarah Jane.

Thomas Milner died on March 8, 1877. He is buried in the North Ridge section of Oakland Cemetery. Mrs. Ann Bowser Milner died on February 21, 1874. Mr. and Mrs. Milner's son Henry married Huldah Westfall. Henry Milner was one of the organizers of the county mutual insurance company. Henry and Huldah Milner were the parents of one adopted daughter, Sarah, who became the wife of Charles F. Steen. 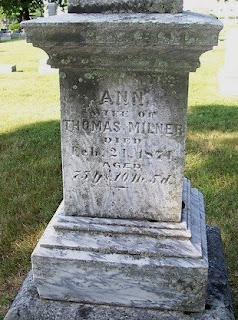 Posted by Dorene from Ohio at 4:37 AM