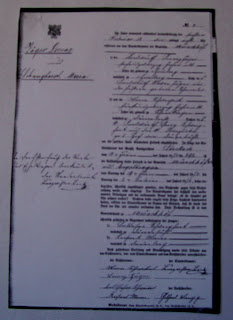 According to Volume 38 of GERMANS TO AMERICA, the Jaeger family sailed to the U.S.A. aboard the ship Pereire from Havre to New York. The family members were listed as: 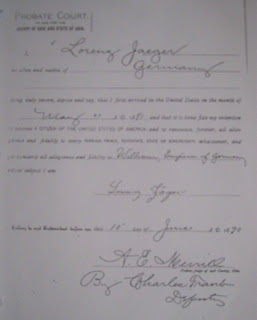 By 1888 the Jaeger family was living in Erie County, Ohio and Mr. Jaeger stated that his occupation was that of a carpenter. Lorenz Jaeger's name became Americanized to Lawrence Yeager. Mrs. Maria/Mary Yeager died on November 2, 1891. After Mary's death, Lawrence marred Catherine Geigel, who was the widow of John Christian Dannenmann.

Lawrence Yeager passed away on August 16, 1911. He was buried near his first wife at St. Mary's Catholic Cemetery in Sandusky, Ohio, though at this time no tombstones for Lawrence and Mary Yeager have been located. 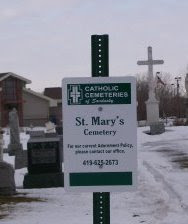 Today a host of Jaeger/Yeager descendants live throughout the United States, including nurses, teachers, pipe fitters,medical transcriptionists, business owners, and an amateur genealogist!
Posted by Dorene from Ohio at 9:03 AM