Below is a very brief timeline of the life of Nellie Goodsite Hill. Click for a larger view:

Nellie Goodsite Hill is pictured here with her husband's first cousin twice removed, Joyce. Both Joyce and Nellie's husband were descendants of Lindsay House and Mary Ann Young. Nellie was born in Perkins Township, Erie County, on February 4, 1899 to William Goodsite and Louisa Mary Dauch Goodsite. Nellie's uncle J. J. Dauch was one of the co-founders of the Hinde and Dauch Paper Company, which operated in Sandusky for many years.

Nellie married Grant Hill, and they had a family of four children. They lived for a time in Michigan, and then moved back to Perkins Township, to live on a farm near many of the people that they grew up with. In 1941, after the U.S. Army bought out a large section of land in Perkins Township for a munitions factory for the War effort, Nellie and Grant moved to a farm just outside Bellevue, Ohio. In a brief article in the August 12, 1942 issue of the Sandusky Register Star News, it was reported that Mr. and Mrs. Grant Hill were on the committee for organizing an "Old Neighbors" picnic for the former families who lived in Perkins, bought were forced to move when the TNT plant was built. This "Old Neighbors Picnic" was a tradition for over twenty years.

On January 2, 2000, Nellie Hill passed away at the Arbors at Clyde. Her beloved husband Grant, and daughter Arline had already died by this time.Grant and Nellie Hill were buried in the Perkins Cemetery in Erie County. 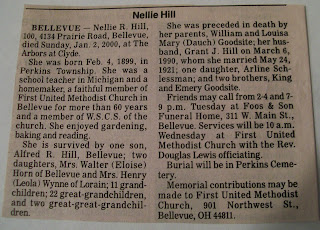 Nellie was "small but mighty." When Duke professor Edward Hudson Young was writing his genealogical book, OUR YOUNG FAMILY IN AMERICA, Nellie wrote to him to provide information about the Young descendants in her husband's maternal line. In the 1990's, my mother and I visited with Nellie. She told us of the many weddings, funerals, and bridal showers that she had attended when she lived in Perkins Township. She had lived a full, wonderful life with her husband on the farm near Bellevue, but her memories of her days as a young woman in Perkins Township were still quite vivid. As our lovely conversation ended, Nellie served us homemade sugar cookies which were delicious! Anyone who ever met Nellie Goodsite Hill recalls her fondly. She outlived her husband and a daughter, and moved with her husband three different times in her life. Through it all Nellie kept a positive attitude, and relied on her strong faith in God. She truly "bloomed where she was planted." 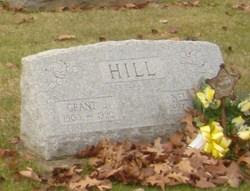 Posted by Dorene from Ohio at 8:04 AM

You were so fortunate to have had the opportunity to spend time with Nellie Hill. Sometimes we are just so blessed with opportunities.

I only wish I could have talked more often with Nellie. She was such a dear lady!

i have a picture of her stone if u need it

I would love a picture of her stone! I just hadn't made it through the snow to her grave at Perkins yet!

halloween2brenda@yahoo.com ill email it if u want

Thanks for the picture of Nellie and Grant's tombstone!

What a lovely tribute! You did a wonderful job with her bio Dorene.

She was such a dear!

Nellie looks like a very dear lady. It's so good you were able to spend time with her. Thanks for sharing her with us.

Great post. And might I add that you made a very lovely, simple, easy to read time-line. How did you make it?

Thank you so much!

This is the site that had the timeline application:

What a lovely picture and a nice bio of Nellie. Nice job

I enjoyed getting to know Nellie a little bit through your words, Dorene. She looks like a lady after my own heart.

Thank you for all the kind words about Nellie! It blesses my heart that she is still an inspiration to others, even after she has left this earth.