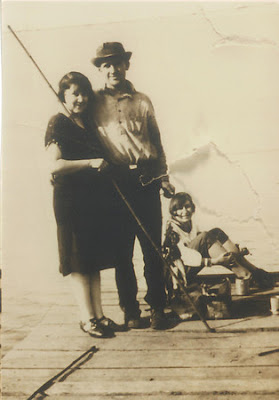 Steve Orshoski was born in Westmoreland County, Pennsylvania on December 15, 1905 to Hungarian immigrants Joseph and Julia (Herzog) Orshoski. Joseph Orshoski worked in the coal mines in Pennsylvania. After living a few years in West Virginia (then Virginia), the Orshoski family settled in Bay Bridge, Ohio in about 1917. Bay Bridge was home to the Medusa Portland Cement Company, where Joseph Orshoski and many other Erie County residents found work. Steve Orshoski, and many of his brothers, sons, and nephews would eventually work at the cement plant as they became old enough to work. Steve and Emma are pictured (left) as a young couple fishing in Bay Bridge. The younger girl may be Dorothy, Emma's younger sister.

On July 25, 1925, Steve Orshoski married Emma Yeager, the oldest daughter of Huron residents Andrew and Lena (Piehl) Yeager. Steve and Emma had five children, a daughter and four sons. The Orshoski children grew up in Bay Bridge during the Depression and World War Two years, when money was scarce. Everyone worked hard, had gardens, and went fishing. Emma was a wonderful cook and homemaker. One of her special meals was "wiener stew," made with franks, cabbage, potatoes, and tomatoes. After her children were grown, Emma was employed as a cook at the Erie County Children's Home, and later in the laundry department of Sandusky's Memorial Hospital.

Steve Orshoski died on March 18, 1971. After Steve's death, Emma's mother Lena lived with her for several years. It seemed to the grandchildren that Great Grandma Lena Yeager was very, very quiet, and Grandma Emma Orshoski was quite outspoken. Emma Orshoski passed away on November 10, 1979. Steve and Emma Orshoski are buried at Meadow Green Memorial Park. Two of their granddaughters still live in the unincorporated village of Bay Bridge, Ohio, on Sandusky Bay. Steve's younger brother Nick married Emma's sister Dorothy, so the children of these two couples were "double cousins." 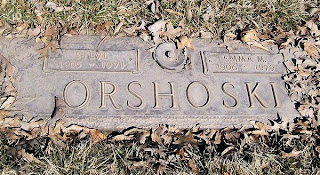 Posted by Dorene from Ohio at 4:26 AM

Your folks are exactly on the same timeline as mine . My Gramps parentsimmigrated from Hungary ,eventually settled in Ohio in Lucas & Ottawa & Wood County area throughout 1901 onwards. I love reading your blog about Sandusky Bay history and the research you did on the myriad of people you find there .
BTW , that Orshoski "franks stew " must have been a locale recipe as they made it too !

How wonderful to hear from someone in Ohio with Hungarian roots! Thanks for stopping by!