An advertisement in the December 30, 1852 issue of the Daily Commercial Register invites Sandusky area residents to have the remains of their loved ones re-interred at Oakland Cemetery "upon reasonable terms and in a proper manner." While there were other burial places in and around Sandusky, Oakland Cemetery appears to be the earliest cemetery owned by the city of Sandusky, which had substantial acreage.

A brief history of Oakland Cemetery is found on pages 327-328 of HISTORY OF ERIE COUNTY, OHIO, edited by Lewis Cass Aldrich:

In the year 1849 a committee of the council consisting of F. T. Barney, John M. Brown and Foster M. Follett was appointed to again select a location for a larger and more appropriate cemetery tract ; and in 1850 another committee, consisting of councilman Solomon. C. Moore, was appointed for the selection and purchase of a tract of land for the purpose of a cemetery and city poor farm. The negotiations of this committee resulted in contracting for a tract in Perkins township, and one hundred and thirty-six acres in extent, with Jane S. Williams, at the agreed price of four thousand seven hundred and one dollars and ninety cents. It was on this tract that the beautiful Oakland Cemetery was laid out. The project of erecting a poor house for the city seems to have failed, and the city sold such part of the land as was not required for the purpose of a cemetery. The portion retained comprises between fifty and sixty acres, and only a portion of it is as yet laid out.

The Oakland Cemetery is well adapted for burial purposes, the grounds being laid out in exceedingly good taste. A large and convenient superintendent's residence is built upon the tract. Although not within the city limits Oakland Cemetery is one of the institutions of the city, and owned by it. Its management and control is vested in a board of cemetery trustees, a body created by an ordinance of the common council of the city, and, at present, is comprised of the following persons : W. G.. Hastings, John G. Strobel and Louis Duennisch. 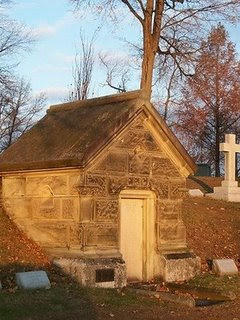