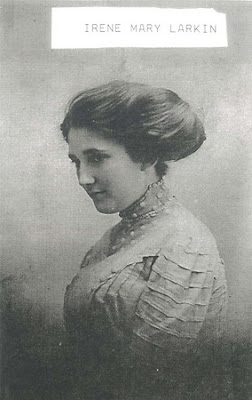 Irene Mary Larkins (sometimes spelled Larkin) was born on October 1, 1891 to Thomas F. Larkins and Mary Louise Cross Larkins. Irene attended Saints Peter and Paul Catholic School as a youngster. A local newspaper clipping dated June 30, 1900 featured a story about the school's closing exercises in 1900. Irene participated in numbers entitled "Ten Little Sunflowers" and the "Gossip's Pantomime," while her younger brother Arthur was in the "Brownie Band." Irene was an excellent seamstress and cook. She often made cake and coffee to share with her neighbors after supper.

Though Irene Larkins was married several times, family members believe that the true love of her life was a Mr. Shirey. During the 1930's and 1940's, Irene helped care for her three grandchildren. When Irene's daughter Doris became seriously ill, Irene cared for her. Irene was also the primary caregiver for her father Thomas, after he suffered a debilitating stroke.

In 1939, before the deaths of her daughter and father, Irene took her oldest grandchild Tom on a train trip to Southern California. A family friend worked at a movie studio, so they attended several films, and even saw a few movie stars in person. In the early 1950's, Irene took her granddaughter Joyce, and Joyce's toddler daughter on another trip to California by train. When people mistakenly thought Irene's great granddaughter was her own little girl, Irene was delighted! She always dressed well, and curled her hair in pin curls at night. She had a youthful appearance, even as a great grandmother. One of Irene's favorite skin care products was "Lady Esther" skin cream. 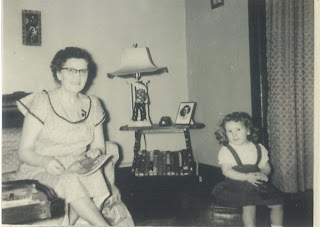 Irene Larkins Risko spent the last years of her life in a nursing home, after she suffered a stroke. Her granddaughters Joyce and Sally saw to it that Irene spent time with the extended family, often with Sunday dinners or picnics. Irene Larkins Risko died on September 17, 1961. She is buried in Sandusky's Calvary Cemetery. Though she suffered tragic losses throughout her life, Irene kept a hopeful, positive outlook on life. 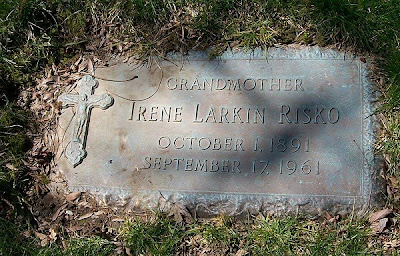 Posted by Dorene from Ohio at 4:32 AM

Email ThisBlogThis!Share to TwitterShare to FacebookShare to Pinterest
Labels: Larkins